In short, Coco is a movie about family and togetherness. That’s the simple side. Coco’s surprises come in breaking with the animated genre’s formalities. It’s not only family, but acceptance, remembrance, and surprise.

Flush with Mexican cultural touchstones, notably the music and belief in the afterlife, Coco mimics Kubo in treating death not with finality, but softening the inevitable with absolute color. The Land of the Dead as shown in Coco is nothing less than welcoming. It’s bright, saturated, and overlit in the right way. Skeletons live there, but amiable ones. Coco isn’t out to scare.

Coco is led by Miguel (a generous and excitable performance from Anthony Gonzalez), a young child with a gift for music, part of a family with a generational disdain for the art. Through this, Coco capably lays out a story of creative ambition. Miguel is meant to make shoes. Instead, he’d rather hoist a guitar, speaking to kids trapped in situations ignoring their individuality. Miguel is an inadvertent hero by doing what he loves.

Lesser films end it there – Miguel breaks free, plays a song, audiences cheer, and the family accepts him. Coco’s Pixar touch comes in a story of false idols, fame, and unraveling truth. It’s that sweet spot Pixar always seems to land on, ending happily of course, but not without dramatic flair. Miguel’s transformation and determination carry him to meet his great-great grandfather, a typical plot device avoiding a typecast fairy tale ending, happy or not.

It’s easy to belittle a production like Coco – Disney/Pixar’s financial assets outweigh any other studio. Yet, the magic of their design is utterly alluring. Compare to Book of Life, another Mexican Land of the Dead tale. Coco beams with visual energy, animating skeletons as if pulled from the earliest era of animation. Look at the cities, stretching into the skyline with mis-stacked skyscrapers, dotted with lights. The music? Rousing and stellar. Book of Life and its wooden marionettes offers generous pizzazz, conquered by Coco’s sense of collective vision.

Coco speaks to a smaller subset than say, Inside Out, yet brings a cultural viewpoint to more. Few can leave Coco without being jazzed by something offered, even if that’s only the visual prowess. Even then, Coco’s enthusiasm is astounding and infectious. Miguel is a carefully considered protagonist, and the way Pixar treats death has more pop value than the artistic intent of Kubo. Coco challenges less, a fine starting point. 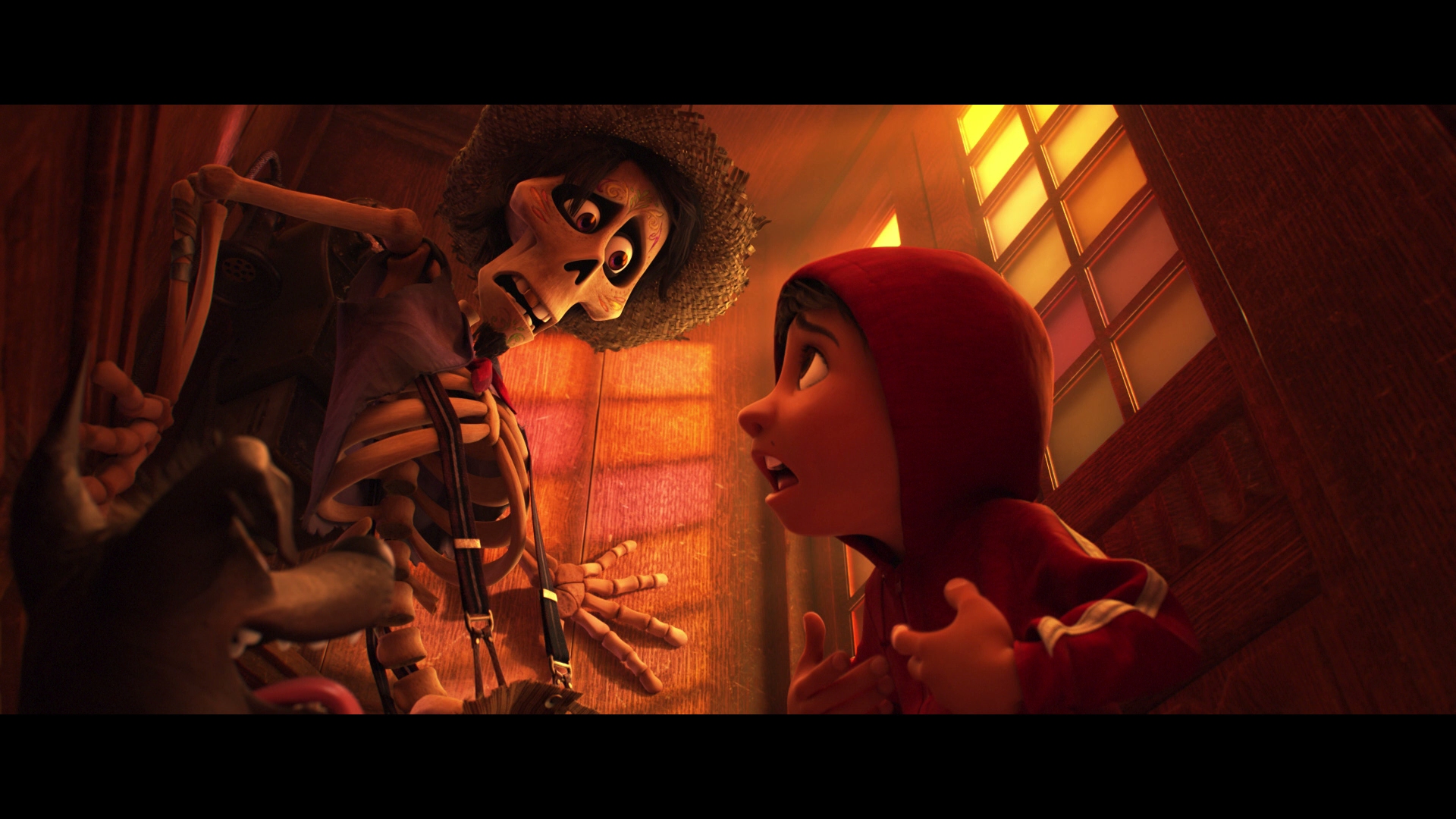 Expectations met. Coco’s constant quest for color topped with color leads to this jaw-dropping disc. Beginning with warmed earth tones, the plethora of bursting oranges and yellows sells Coco early. Into the Land of the Dead, it’s an explosion of blues, pinks, and purples unlikely to find a match anytime soon.

Depth is marvelous, boosted courtesy of deep black levels and nicely calibrated contrast. Coco never loses its sense of either. Darker scenes light themselves by candle; daylight blows things open with extensive sun. The Land of the Dead runs up the electric bill with piles of light strings. HDR effects don’t slow down. It’s definitely a disc on the darker side (when compared to the Blu-ray) but the benefits make up for it.

Although a 2K source, sharpness remains at a consistent peak. Fidelity draws out skin, clothing, and environment texture. Skeletons boast wonderful detail, not only from paint on their faces, but bone scrapes and other qualities. Texture in Miguel’s living realm comes from bricks or leaves, sometimes by the hundreds. Disney’s encode handles the difficult sections minus problems.

Save for a handful of compression issues, Coco looks splendid on Blu-ray. Brilliant colors pop from the screen. A dedication to dimensionality marries black levels and contrast. Textural qualities lose none of their zest in 1080p.

Coco does ask a lot of the format though. Walking on the bridge to the Land of the Dead, the numerous bright orange leaves making up the walkway leaves behind some artifacting. Nothing severe, rather a small loss of premium-level detail.

Important note: The UHD defaults to a Dolby Digital mix rather than Atmos. Poor choice. Once the issue is rectified, Coco comes alive through its music. All of the guitar strumming and vocals breathe when under care of this Atmos mix. Aural vibrancy pushes around the soundfield, jumping freely from the center when it comes to dialog or sending fireworks into the upper surrounds.

Crowds add audible space to the mix, enveloping the soundfield. A scene inside of a party, along with the hearty bass of the music, offers something to each speaker. General ambiance skews diluted, but that’s a quibble. When needed, the track provides.

The UHD is awfully lonely. There’s nothing there in terms of extras, which means switching over to the Blu-ray for a commentary courtesy of co-directors Lee Unkirch & Adrian Molina along with producer Darla Anderson. Their chat continues (if you choose) over a conceptual short that’s quite dazzling. Mi Familia runs 10-minutes, asking the crew to speak on their family quirks. The simply titled Dante details the creation of Coco’s dog sidekick. A short on how to draw skeletons is fun for kids.

Inside the case is a third disc, this one all bonuses. Things begin with the 20-minute Thousand Pictures a Day, detailing the research process. Music of Coco spends 13-minutes on the score and songs. Peeking into the Land of the Dead design is Land of Our Ancestors, brief at six minutes. Fashion Through the Ages runs through the costumes and their authenticity. A brief look at the guitar featured prominently in the film is fine, and you can watch Anthony Gonzalez land the lead role after that, another brief feature.

Paths to Pixar lets the crew detail how they ended up on the team. Another art project (for Papel Picado) is followed by a bevy of deleted scenes and promotional pieces.

Coco is a delight, brought together by a wonderful lead character and an outpouring of cultural milestones that look gorgeous on screen.

The 15 unaltered images below represent the Blu-ray. For an additional 17 Coco uncompressed screenshots, early access to all screens (plus the 10,000+ already in our library), exclusive UHD reviews, and more, support us on Patreon.