The best scene in Daddy’s Home 2 concerns a mishap between a wandering snowblower and endlessly strung together Christmas lights. Doltish Will Ferrell engages in some physical comedy, and the chaos of the best holiday comedies breaks free. It’s a National Lampoon’s Christmas Vacation moment with the same obliviousness of Chevy Chase wrapped up in Ferrell.

Unfortunately, there’s more to Daddy’s Home 2. Too much more. Scenes of non-comedic aimless storytelling fail to capitalize on the snowblower goof, crushed under the weight of a script pitting liberal and conservative agendas. There’s Ferrell, gentle and non-confrontational, paired with his equally passive father, John Lithgow. Then tough guy Mark Wahlberg, less aggressive than in Daddy’s Home, matched up with the tirelessly cynical Mel Gibson.

The two pairs slam against one another, one side pushing a hardened masculine exercise – aggressive, toughness – the other amiable – fearful, laid back. The poor kids in the middle of this mess will never recover.

Just in casting Lithgow and Gibson, Daddy’s Home 2 suggests a wacky ‘90s comedy, but no. Instead, Daddy’s Home 2 offers the worst of contemporary studio comedies. Much of the film plods along, dealing in repetitious family issues, and never with a purpose. At its worst, there’s a late night meeting over a rising thermostat, purposeless, and later, without any resolution. The scene just hangs there, right at Daddy’s Home 2’s center. That’s where the pace and energy need a surge. Instead, the comedic power is cut off.

Where say Christmas Vacation’s frustrations boiled over into a sensible family-driven climax, Daddy’s Home 2’s finish is impossibly gentle. Everyone is happy. They sing together. Nothing is wrong, and considering the misanthropic attitude running throughout, it’s entirely artificial.

No one in this movie is ever happy. Ferrell keeps his feelings pinned down. Wahlberg whines. Gibson turns to eye-rolling mannerisms. Lithgow hides a family secret. The kids learn to hate Christmas. And the mothers? They serve as background decoration to a script obsessed with a showcase of empty testosterone.

Just prior to the credits, Daddy’s Home 2 shoots for a joke, pulling in a real world hero – a male, of course – to close on another blast of man-dom. Daddy’s Home 2 never seems comfortable in anything other than a virile display, stepping awkwardly through emotions and ultimately, becoming feeble. 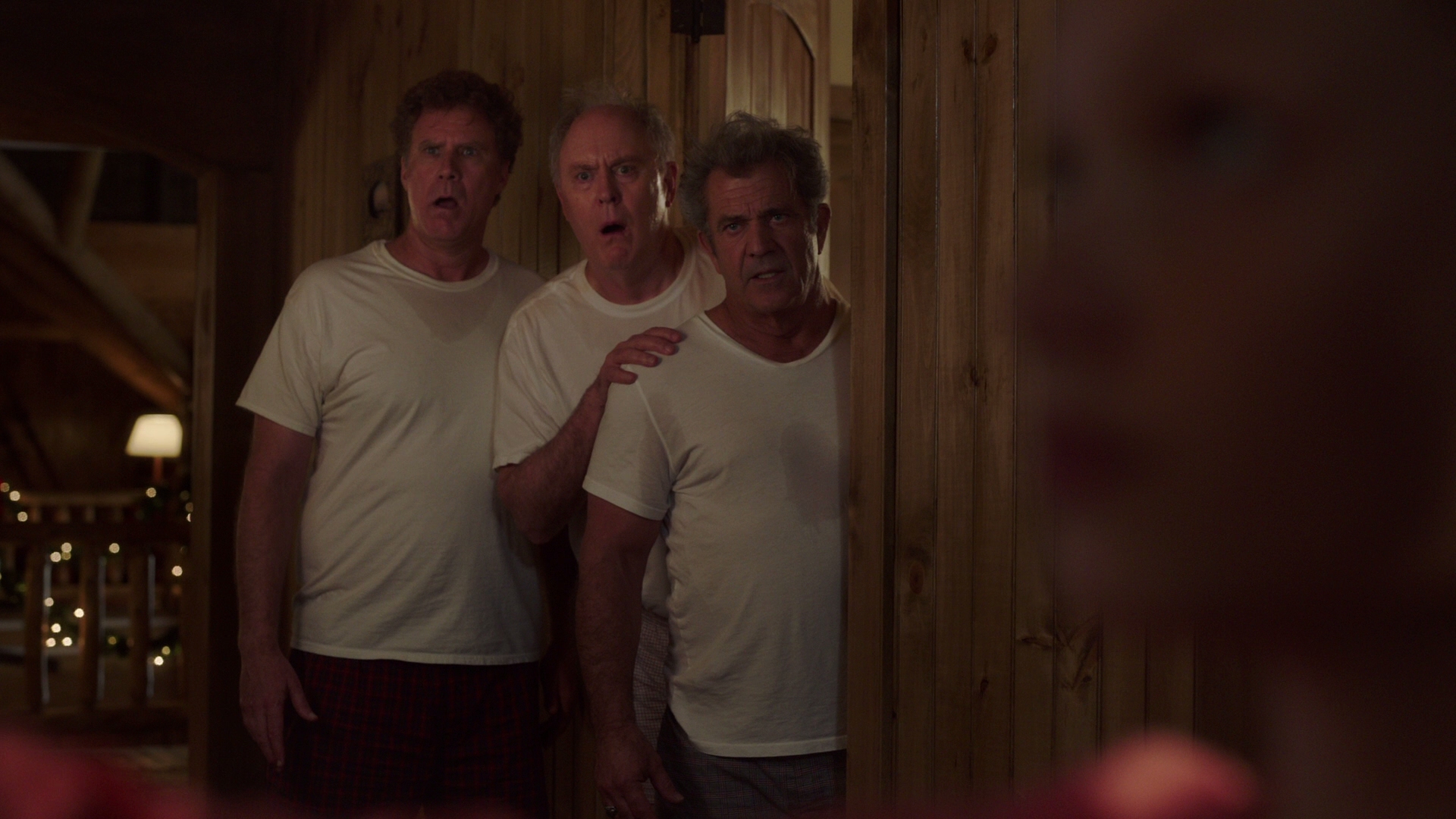 A 2K source saps much of the life from Daddy’s Home 2. Resolution sags, struggling to resolve exteriors and leaving facial detail barely above adequate. In some shots, Mel Gibson undergoes a digital de-aging, an apparent smudginess only a step below the typical level of fidelity.

At least the color remains bright, well saturated with intense primaries. The Christmas setting brings out a slew of reds, outright glowing at times. Accurate flesh tones keep things pure. Daddy’s Home 2 avoids aggressive color timing, adding to the palette without dipping into blues or teals as with too many films.

Strong dimensionality follows Daddy’s Home 2 throughout, delivering powerful black levels with superb shadow detail. Watch a scene inside of a theater, looking out at the crowd, where the limited light of the screen demands perfection. Even into the back rows, people stay visible as the scene plays out. Fine highlights come from the bevy of Christmas lights, illuminated and intense.

Little challenges this Blu-ray. A few spots of noise are shared between the formats. Both discs handle them well. Pleasing color and a bright digitally-lensed image offer little challenge to Paramount’s encode.

Both the UHD and Blu-ray share an Atmos track, one offering a few moments of merit. A tree falling hits the subwoofer with a pleasing thump, one of the instances where the low-end is involved. The rest avoids the sub.

Most of Daddy’s Home 2 works with ambiance, filling a bowling alley with a crowd rushing into each channel. Chaos with the snowblower spreads around, and a gathering in the movie theater stretches outward from the center. Inside the theater, the in-movie movie properly fills the rear soundstage, as it should.

Blase featurettes take up space, expectedly churning through cast info in separate seven minute pieces. Details on the sequel process take up five minutes in another featurette. The appearance of a celebrity guest is discussed in the last of the extra’s featurettes. Six deleted/extended scenes run for 11-minutes, and a gag reel is the best thing on the disc.

While a few sequences generate laughs, most of Daddy’s Home 2 repetitively deals with cynical masculine in-fighting without purpose.

The 15 unaltered images below represent the Blu-ray. For an additional 11 uncompressed screenshots, early access to all screens (plus the 10,000+ already in our library), exclusive UHD reviews, and more, support us on Patreon.