It wasn’t a kind or gentle story. Stephen King penned this coming-of-age tale as only Stephen King could – kids confronting the fears of adulthood, those fears manifesting as a carnivorous shape-shifting clown.

Seven kids overcome their personal demons, a terse character-driven saga in It. A speedy screenplay introduces the town of Deery, Maine, Pennywise (Bill Skarsgard), and the slew of junior high-age starring roles to this film. That’s impressive writing work. Credit the casting team too who find kids capable of these roles, asking more of them than to merely react to jump scares.

This remake of a nostalgic TV adaptation certainly hinges on nihilism. A teenage girl runs from her sexually abusive father. Another kid watched his parents burn to death. Bullies pounce on a number of the group. Eventually, the “Losers’ Club” and bullies sling rocks toward one another at close range. It obsesses with the worst of everything. Every bit of behavior is rooted in spitefulness. Even in overcoming fears, there’s a propensity toward violence. It never considers another solution.

Set in the ‘80s, It finds itself under different circumstances. Breaking with modern sensibilities, the kids sling four-letter words, anti-gay slurs find use, and there’s a lack of safety to the whole thing. That’s inherently authentic, even freeing. Bullies don’t use social media of course – they cut their names into the bellies of their opponents. That’s not so freeing. Parents won’t coddle their children. They drive past, indifferent, acknowledging the reality of Deery’s killer clown curse. There’s an unwritten law in Deery. Sadism and sacrifice, ruled okay, so long as Pennywise’s hunger is satiated.

It comes from a time earlier time in Stephen King’s resume. It feels so. There’s maturity in the concept, envisioning the discomfort of impending adulthood as a figment of imagined dread. This more authentic cinematic turn roots out issues at the source, a mean-spirited and brutal tale that uses shocks for its quality metric. Pennywise is the source of fear, a creature dispersing the reality of sex abuse, cruelty, past experiences, and mental health. If anything, he’s an escape – a mean one, but a dodge from reality. That makes It inherently flat, a small town monster movie with plenty of teeth on its title monster, if not so much its story. 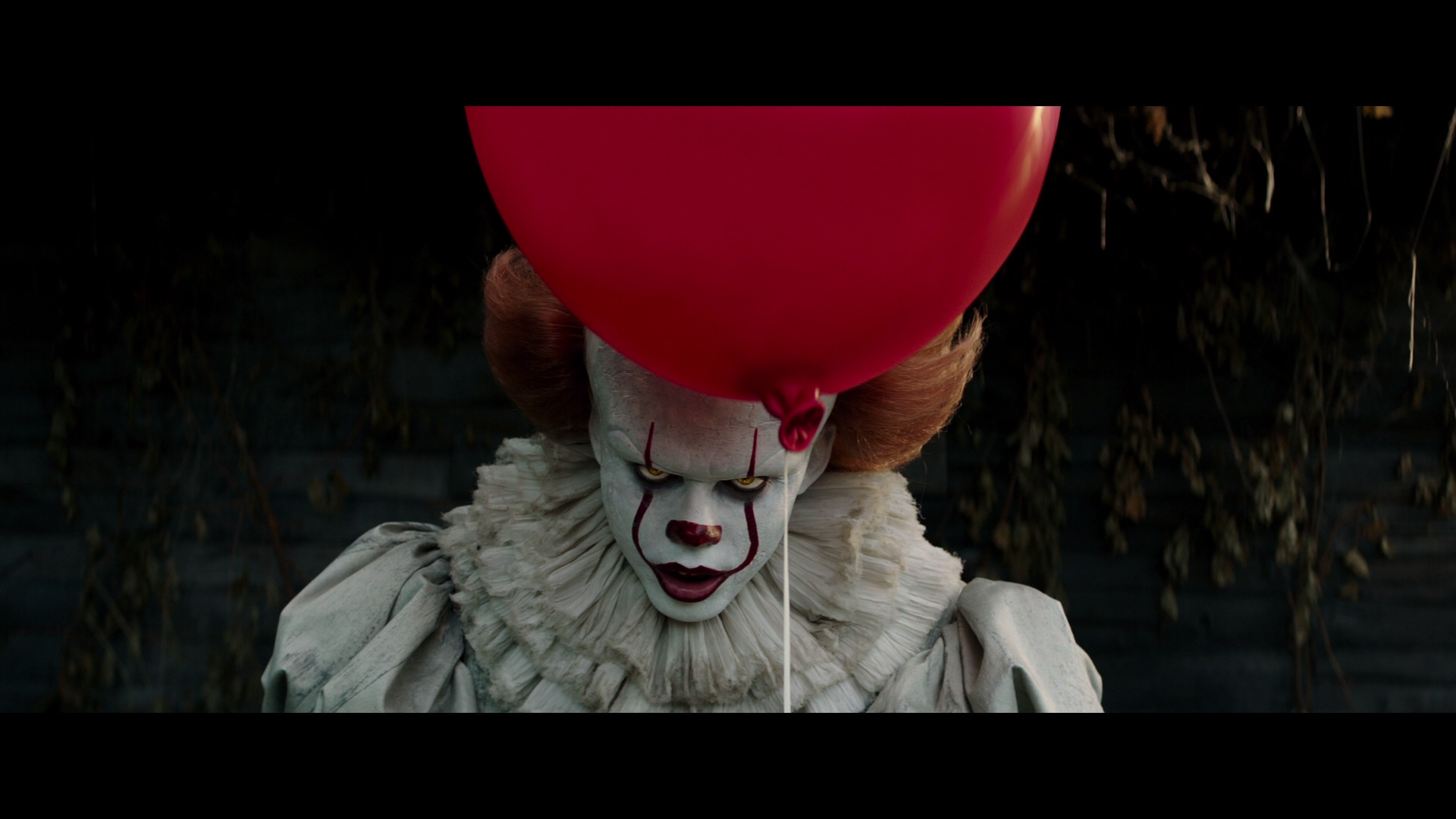 It comes to UHD with the full breadth of this format’s capabilities. The opening scenes deal with a basement cloaked in shadows, showing off the density of black levels. Afterward, Deery opens to a sunlit sky, drenching the screen in dazzling brightness. The range of this feature is special.

For such a dreary story, It uses glossy, superior digital clarity. If there’s a speck of noise anywhere in this feature, it wasn’t visible during this viewing. Warner’s encode doesn’t present any complications and neither does the source.

Also evident is a splendid range of color, pumped with bright primaries, flawless flesh tones, and rich palettes. A scene coated in blood shows off spectacular red lighting. Inside of a burned home, the grays and blues come together for a nicely decorated scene.

With a 2K master, It loses a minuscule level of sharpness over other 4K sources. Contrast makes up for plenty here. Certainly, the level of textural fidelity deserves credit. Facial definition extends beyond other comparable 2K offerings, and Deery is a setting with intricate small town building design. Brick and woodwork both look sensational.

It loses detail in the shadows on Blu-ray. Exceptional black levels create some impressive images, even if they swallow some detail in that process. A slight clipping occurs on occasion from the Maine sunlight, minor in comparison. Brightness is absolutely gorgeous.

Warner does the right thing and includes Dolby Atmos on both formats, although note each disc defaulted to DTS-HD 5.1.

Over the studio logos, rain falls across the soundstage and a haunting hymn pops up in each channel. It’s effective, and continues into the feature, especially the rain. It uses ambiance to instill a bit of fear, with rats scurrying around through the rear channels or the occasional board creek to indicate a sense of place.

Powerful LFE highlights each of Pennywise’s attacks. When warranted, It turns up the volume to show off dynamic range. Subwoofer use isn’t subtle; it’s at full volume or it isn’t working at all. Yet, the smart utilization of the low-end is the key.

Pennywise Lives opens a limp set of bonus features. This 16-minute look at the character and casting skews derivative. The Losers’ Club looks at the young cast, their characters, and casting. Stephen King explains where the idea came from in Author of Fear. A handful of deleted scenes bring the total amount of bonuses to an hour, a nice number if not indicative of quality.

It delivers a more accurate adaptation of the source material than the TV mini-series of old, but this also exposes the limitations of the story.

The 15 unaltered images below represent the Blu-ray. For an additional 25 It screenshots, early access to all screens (plus the 9,000+ already in our library), exclusive UHD reviews, and more, support us on Patreon.