The Los Angeles of Blade Runner 2049 has barely changed since the 1982 original. It’s degraded: Hazier, foggier, still rainier and lit only by gargantuan holographic displays.. People live in dull concrete structures, all traces of ambient life erased. Birds, dogs, plants; all of it gone. The smog probably killed it all, the remains bulldozed for more skyscrapers, if such buildings can scrape a skyline no longer in view. At least the cars still fly. It’s gorgeous in a dreary, suffocating way. In the 30 years since Blade Runner, this production design indicates an intelligent nudge in time.

Los Angeles occupies every strip of land available, up to an including the coast line. Beaches disappeared for a wall, saving the city from flooding, if impeding escape. Everyone seems a prisoner. There’s no room for farming. A few outliers harvest only insects for protein. Without trees, birds disappeared. It’s a mystery of what else there is to eat.

LA is a city of national convergence. Japanese banner ads pierce the air. Russian dialects fill the street. Americans, obviously, live here too. They mingle with Hungarians, listlessly standing around the apartment of K (Ryan Gosling). He’s a Replicant – an android – and Blade Runner 2049 doesn’t toy with the issue; this better-than-the-original sequel has greater themes to explore.

Broadly, Blade Runner 2049 asks who and/or what we are. That’s typical of sci-fi. The twist asks if we’re capable of making something better than ourselves and what happens if our sense of purpose evaporates. Humans of Blade Runner 2049 barely seem to exist. The environment needs to go overboard to stimulate passer-bys. All sense of prudishness is lost. Ads use nude women, brothels sell their wares behind barely concealing frosted glass. The sound isn’t muted either. Morality might make use human. Blade Runner 2049 is a vision of what happens if we let loose entirely.

Canadian director Denis Villenuve, who by this point, after Sicario and Arrival, is easily one of studio cinema’s best, crafts a rich, suggestive world. Blade Runner introduced cyberpunk; Blade Runner 2049 rejuvenates, reinvents, and betters it. Creating elegance in misery – that’s impractical, but threaded through an arresting Adam & Eve tale (rife with religious figments of creation and soul), Blade Runner 2049 succeeds.

In its greater thematic purpose, Blade Runner 2049 seeks connection, or rather, what connecting is, why it matters, and how connections to one another free us. So much of Blade Runner’s is about separation. K arrives home, locks the door, and turns to face a holographic AI instead of humankind. Capitalism ran aground, creating things (and a need for those things) sold as better than physicality or human emotion. Androids, holograms, AI; who wants people when it’s so easy to buy an upgraded version of the same thing?

Blade Runner 2049 uses a tree for visual storytelling. The tree is dead, of course. Everything here is in some way. But that tree, pale and bark-less, is a fading relic of the past. It gave up. So did we in this neo-future. If only we could connect. 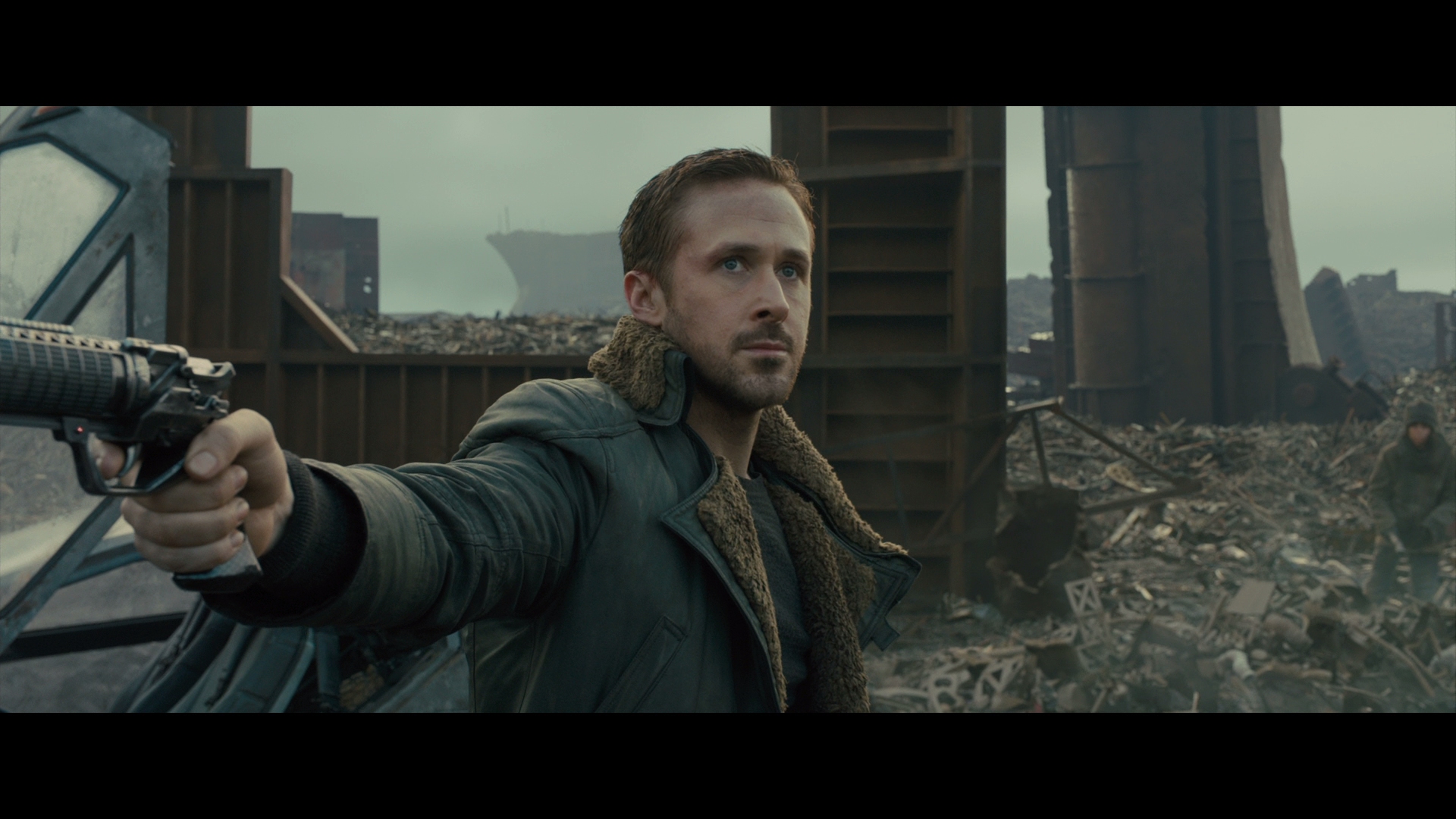 If there exists a test for a display’s ability to showcase black – pure, absolute, black – throw it away because Blade Runner 2049 is the best to date. During a late third act struggle, a vehicle becomes surrounded by night. As the car swirls near the center of the frame, everything else is black. It’s stunning. Impeccable cinematographer Roger Deakins drenches Blade Runner in shadow and adores the chance to draw characters into the frame from silhouette. The UHD is utterly capable of preserving this style.

Future LA is likewise dampened, but never lacking in contrast. Neon displays strike with intense brightness, swelling outward from the persistent rain. Highlights stand out, whether headlights or dim sunlight fighting through the smog.

Dense color grading makes use of this format, displaying an organic blue hue for much of the runtime. When the color break happens, vivid oranges pop from Blade Runner 2049’s frame. A few instances of teal sidestep the general palette. A fist fight in a holographic casino lounge is pure saturated bliss, rich in primaries. Likewise, the holographic advertisements offer splendid splashes of color.

While there’s a natural loss of image density going to the Blu-ray from the UHD, there’s limited minimizing of fidelity. Blade Runner 2049’s textural quality is maintained in 1080p. Facial definition resolves pores and other minuscule details. Cities drop into the horizon with no visible aliasing.

Warner’s encode struggles slightly in the dustier areas of town. Any loss of visual information as a result is ultimately minor.

City exteriors introduce the inconsistencies. While many of the naturally 3D holograms offer spectacular, layered dimensionality, actual shots of the city waver. Hefty cross talk and misalignment causes strain on the eyes and a flattened look. For all of the reaching skyscrapers and shots down streets, these shots leave behind only disappointment. Into the halls of the Replicant records, the issue is matched, so it’s not only future Los Angeles causing trouble. When it works though, Blade Runner 2049 shows an adept eye.

In other moments, Blade Runner 2049 builds a world with ambiance. Street level rain effects and busy marketplaces flood the soundstage. A scene near a beehive hums in every channel. Voices spread across the soundstage, effective in establishing space. Panning effects of flying cars match the visuals, perfectly in sync.

If Blade Runner 2049 needed to let buyers down somewhere, at least it’s here. While Designing the World digs deep into the process of production design for 22-minutes, there’s not enough here to sink into. To Be Human’s look at the casting methodology offers fine insight too, but again, lacking in substance over 17-minutes. As a short dive into the mythos, Blade Runner 101 offers the basics, and some of the material repeats from the latter two featurettes.

Of the most interest are three prequel shorts, one of them an anime. At 28-minutes total, these fill in the missing years between the two Blade Runner films, and do so with unique styles. Think Animatrix, if only one of those were animated. Definitely worth watching.

The 15 unaltered images below represent the Blu-ray. For an additional 27 Blade Runner 2049 screenshots, early access to all screens (plus the 9,000+ already in our library), exclusive UHD reviews (including the original Blade Runner), and more, support us on Patreon.