As Matinee begins to stir, President Kennedy’s address regarding Cuba cuts into a comedy show. It’s a sign that while, yes, Matinee adores the idealist in Donna Reed and the softness of Leave it to Beaver, there remains a reality behind those fictional depictions. Matinee won’t ignore history while laying on thick sentimentality.

A progressive school student played by Lisa Jakub denounces pre-Civil Rights segregation. She has a point. The lone person of color in Matinee serves on the military. It’s a one line role. A troubled student pickpockets his way through town, seemingly parent-less. America wasn’t perfect – unless it was watching Mant.

Mant is likely the movie Joe Dante always wanted to make. Post- Pirahna and Gremlins, both enamored with the ‘50s creature cycle, Mant is a natural Dante throwback. As the movie-in-the-movie, popularity propelled by a shrewd promoter Lawrence Woolsey (John Goodman), Mant captures the hazy horror of the era. Mutated by radiation, a man slowly evolves into a skyscraper-towering insect. Stock musical cues from Universal’s vaults and stock footage from Warner’s lends authenticity to this homage.

Laughing at atomic age cinema, with crude science and childish scares, is easy. Matinee does it too through Mant. Charles Haas’ script picks up on the wonky dialog; Dante captures the cramped and listless staging. Being within Matinee though, Mant represents what those films were. When the theater doors closed and projectors whirred, any panic outside was temporarily avoided.

That bit of escapism captures a snapshot of a changing culture. Matinee amalgamates the ‘50s and ‘60s; it’s a self-appointed cinematic anachronism, lending a fantastic quality to an already dreamlike story. Matinee isn’t about cinema, rather how cinema intersected with the prevailing paranoia of the period – and exploited that scenario for profit. Matinee doesn’t shy away from the capitalist side and Woosley freely uses kids to expand his bottom line. Rows of people outside run to the theater for a few jump scares, but Matinee plots what those Floridians were running from too.

Matinee concerns the literal nuclear family, the kids pointlessly ducking in school hallways as air raid sirens scream, moms glued to the TV as the UN works toward deescalation, and a theater owner double checking an escape route to his newly installed bomb shelter. Dante stages much of this for nostalgia and laughs (“How naive those people were!” is a prevailing sense), playing to smarmy hindsight. It’s maudlin, even artificial, but juxtaposed enough with real world circumstances to lend Matinee credibility. Matinee is clear Americana, truthful as it is hammy. 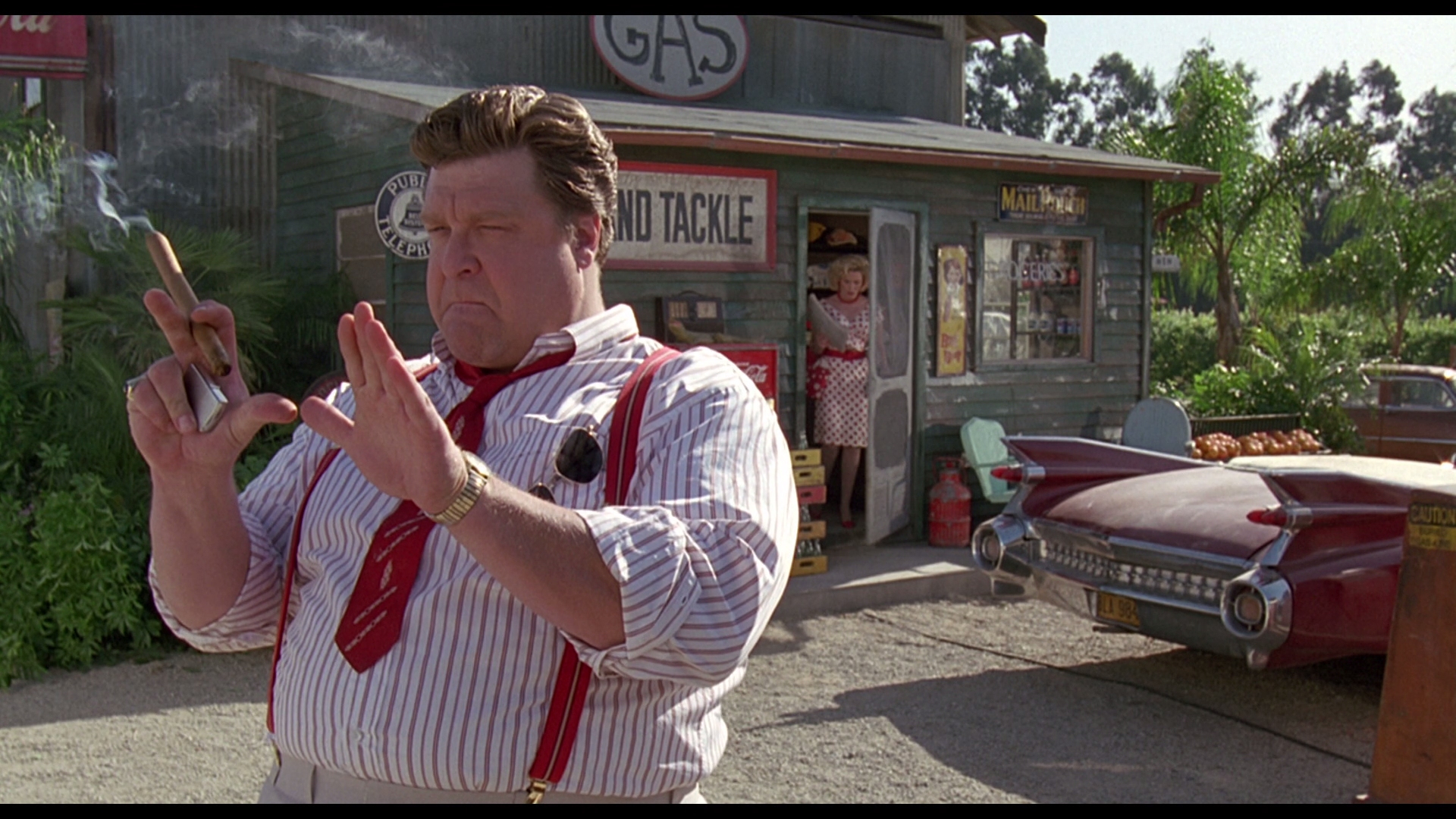 Well, at least Matinee is on Blu-ray, even if looks like this. Shout puts Dante’s film out as part of their Shout Select line, and if remastering took place, it didn’t happen in 2017. Or 2016. Or even 2015. Matinee looks built for the DVD era, with crummy grain reproduction and lagging resolution.

Grain retains consistency, so that’s a plus. Unfortunately, that grain structure swarms the image, unnaturally thick and harsh. Minor ringing indicates some sharpening at play, enough to bulk up the film stock’s inherent quality and turn it against itself.

Middling fine detail also suggests a dated master, low in visible clarity. Medium shots clump together, let down by a trio of problems – a dated scan, the film grain, and questionable encoding. Then again, few encodes would likely handle this muddy source without issues.

At least time didn’t fade Matinee. The bevy of reds, from lipstick to the theater fabrics, beautifully saturate. Flesh tones drive the feature, and the small Florida town looks gorgeous in these conditions. Pleasant contrast only encounters clipping once (as Goodman stands outside a gas station in the first act) before settling into a comfortable brightness. The B&W footage of Mant uses a fine gray scale.

Two choices exist for the discerning audiophile: 5.1 and 2.0, both in DTS-HD. The surround mastering has moments, if often unnatural. For every time the theater speakers swing into the rears while showing the crowd, other instances lack the proper directionality. When the balcony begins to crumble, the soundfield muddles. Separation between stereos and rears evaporates.

Matinee does nicely envelop crowded school hallways. Panning jets while on the military base serve as fine ambiance. Woolsey’s “Rumble-rama” pokes fun at Universal’s Sensurround, generating a nice shake in the low-end. General clarity and dialog precision is maintained; Matinee ages gracefully in this way.

If Shout didn’t spend the money on video mastering, they spent their budget on the bonuses. A slew of new interviews introduce the bonus features, beginning with a 20-minute Joe Dante chat. An older interview with Dante titled Paranoia in Ant Vision, covers some of the same ground but for longer at 32-minutes. Co-star Cathy Moriarty spends 12-minutes speaking with the Shout crew, and Lisa Jakub goes for 25. Production Designer Steven Legler and editor Marshall Harvey speak for 15 and 11-minutes respectively. For the finale, director of photography John Hora fills a 21-minute space.

Mantastic details the making of Mant and how the crew came onto the project. It’s likely wise to watch all 22-minutes of Mant first though, included here as one of the best bonuses. Raw behind-the-scenes footage comes next, with mundane vintage featurettes and short deleted scenes reel as the finale.

Joe Dante’s Matinee is a joy with a deftly handled mix of fantasy and reality.

The 15 unaltered images below represent the Blu-ray. For an additional 14 Matinee screenshots, early access to all screens (plus the 9,000+ already in our library), exclusive UHD reviews, and more, support us on Patreon.