Mayhem isn’t interested in being subtle. Once an office building becomes infected by virus ID-7, cubicle jockeys turn rabid, all of their morals removed. That virus serves as a thematic mask, practically inconsequential to the discordant dark comedy to come. In reality, that viral cover is a means to an end – make Derek Cho (Steven Yuen) CEO by any means.

Beginning in the basement, Cho makes his way upward as the infection spreads violence through the building. That’s literal movement – Cho uses the elevator – and metaphorical movement – he punches his way through the corporate ranks. Mayhem delights in the raw and dirty. The “mayhem” of the title involves nail guns, hand saws, screw drivers, and walls. There’s a mean streak here.

The satire is delirious, but so pointed as to lose the effectiveness. A corporate CEO snorts cocaine, and rather than show empathy for his employees murdering one another, he’s more concerned with the loss of billable hours. Said CEO sits in meetings with eight ranking members, deciding the professional fate of people they’ve never seen. Together, as “The Nine,” they form their clique. Each of them is white too.

Mayhem’s desire is to be cruelly satisfying

For Cho, the driven if disillusioned Korean, he’s fighting for a chance at the table. The racial insinuation, like the rest of Mayhem, isn’t interested in hiding. Cho’s outbursts represent the frustration of the wage gap. Before the virus, Cho deals out casual foreclosures. Mayhem’s corporate life is capitalist above all, a one-above-all parable set in the American employment system.

Pieces of Mayhem feel like venting from the creative team. Whether it’s Matias Caruso speaking from his script or Joe Lynch from his direction, Mayhem’s desire is to be cruelly satisfying to office workers. Cho and his impromptu sidekick Melania (Samara Weaving) gruesomely dispatch higher-ups when the chance arrives. Kill the rich, let the lawyers sort them out.

Weaving is a delight. Cho’s anger shows, but Weaving’s manic laugh and sinister giggles better isolate the tone. She’s mimicking DC’s Harley Quinn. Needing only make-up and a baseball bat, this performance supersedes Margot Robbie’s in Suicide Squad. Mayhem needs that messy streak. The virus needs to elicit a loss of control. Weaving has it, Cho not as much.

If some of this sounds familiar, 2016’s Belko Experiment played in the same arena. Both films create a cinematic outlet for the cubicle-bound, resorting to creative violence to make their point. Mayhem feels smaller, more character-driven, if without the runtime to lock everything in. Mayhem, like Belko, is overeager. Both films want the violence, but don’t treat it as a payoff, just the only solution. 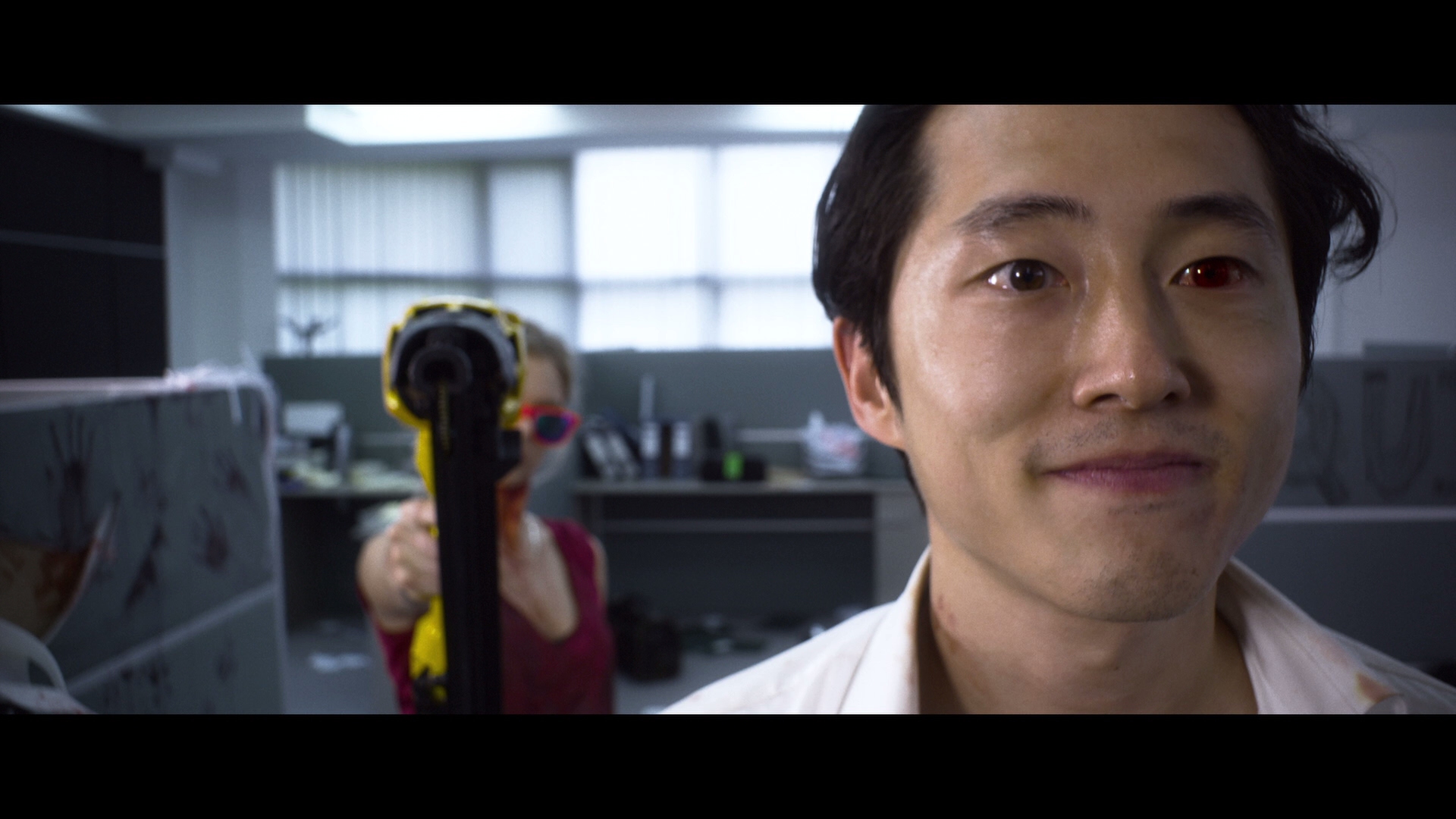 In close, details spread around like the virus. Texture blossoms on various surfaces (even the paint on the walls) and clothing resolves nicely. The 2K source shows limitations with a slight lack of sharpness. Cinematography employs a bloom effect on occasion too, further dwindling detail.

If there’s an issue, it’s noise. In the opening chapters, compression leaves behind a smearing artifact. It’s persistent. Noise jumps and clings to walls and without the help of the encode from RLJ. Bitrates seem ill-equipped to handle the source. This is where the UHD offers a slight bump. The Blu-ray crumbles, especially in medium shots, reducing even basic definition.

Without deep color or HDR, the two discs otherwise merge into one. The only difference is in how the formats handle the noise. That gives the UHD a bit of space at the finish, if only by a small margin.

Furthering equality before formats, both offer DTS-HD 5.1. Prominent music stings and staging immediately establish a great range. Powerful, tight low-end support doesn’t enhance the action as much, but the soundtrack asks a lot of the subwoofer.

Given the closed in environments, a rich soundstage develops. Chaos sweeps around between speakers, using the rears judiciously to capture the flow of action. Even if the situation calls for ambiance, Mayhem frequents the full width and depth of a 5.1 space.

Director Joe Lynch, cinematographer Steve Gainer, and editor Josh Ethier form a trio for the provided commentary track. Creating Mayhem is next, a generic making-of. A look inside some paintings used in the film runs a minute-and-a-half.

Without any subtly, Mayhem explores the frustrations over the American workforce with a darkly funny if unsuccessful satire.

The 15 unaltered images below represent the Blu-ray. For an additional six Mayhem screenshots, early access to all screens (plus the 9,000+ already in our library), exclusive UHD reviews, and more, support us on Patreon.