In back-to-back viewing, the Transformers films blend mindlessly together. Blame their formula, which, even with different casting in Age of Extinction, still features a geeky intellectual and particularly shapely blonde in lead roles. High-end cars transform into toy commercials, and Optimus Prime saves the Earth. The original cartoon offered more variety between episodes.

The longest of the five Transformers, Age of Extinction doesn’t do much with its girth. Cade Yeager (Mark Wahlberg) takes over the hero role from a missing Shia LeBouf. Yeager poses on his “deep in the heart of Texas” property, American flags fervently waving in the summer winds. Bills weigh on him. Foreclosure is near, a plot device central to a plethora of post-recession cinema. Age of Extinction either plays to the vulnerable conservative middle class or a more liberal subset geek culture. The script never decides on a way to lean.

Absurd levels of noise, destruction and improbable escapes ensue, playing to a fanbase

Central to Age of Extinction is an empathetic immigration story. After destroying Chicago (and somehow only killing 1,300 people) in Dark of the Moon, a government regime hunts down friendly Autobots as terrorists, a none-too-subtle jab at racially charged, US policy makers. They even print up a playing card set to track the robot “terrorists.” Anti-Transformer rhetoric broadly spreads through Age of Extinction. Man hero guy Yeager stands tall with his robot buds, stating, “We’re going to get our freedom back,” and says so with a straight face.

A corporation, dealing in Transformer technology, ups and moves to China. There go the jobs, furthering a right-leaning fear. The location invokes a stirring of vague racism – of course the Chinese characters (even the one-offs) know martial arts. Yeager makes the trip to China too, primarily to rescue his daughter (Nicola Peltz), Transformers third casting for a damsel. She screeches, begging for rescue, falling into the arms of either her overbearing father or rally racing boyfriend (Jack Reynor). Amazing how the heroes in these movies always know cars.

Battles in China lead to predictable combat, robots firing at robots as Chinese citizens run for cover. Mr. Texas helps on the sidelines, firing a gun sword like a sharpshooting champion. Eventually, Age of Extinction brings in a bevy of Dinobots (Transformers killed the dinosaurs, you see) and a villainous magnet weapon. Absurd levels of noise, destruction, and improbable escapes ensue, playing to a fanbase. Seeing entire ships lifted skyward then dropped on buildings undoubtedly has blockbuster appeal. For a moment, it’s possible to forget the convoluted, back-and-forth political inanity; enjoy the ludicrous spectacle. That’s all any Transformers can offer. 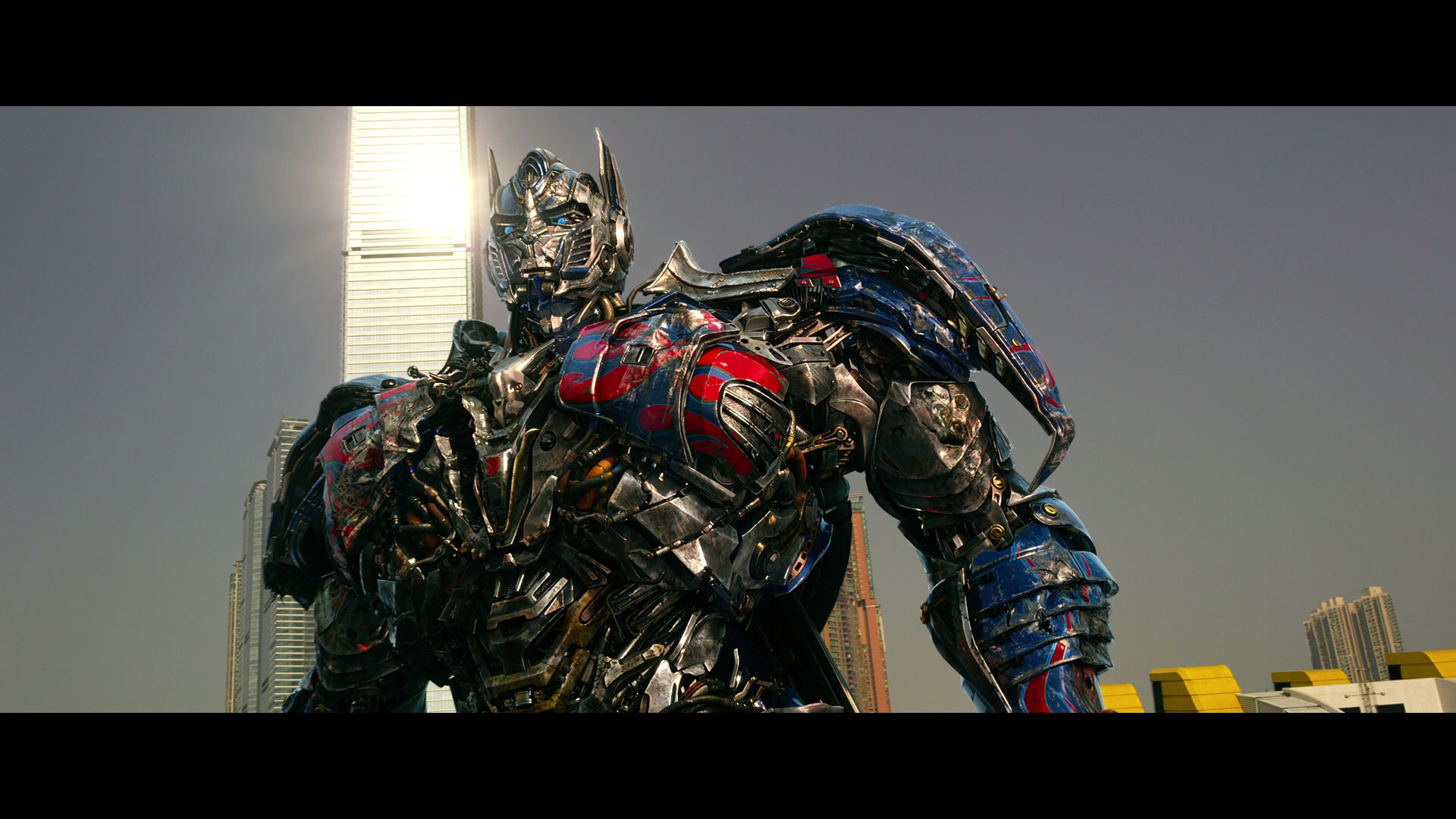 High praise is deserved for this stellar UHD. One of the highest-end Blu-rays upgrades into this near masterpiece. Finished at 2K or not, the level of detail on display is an astounding piece of visual material. Outside of slight flickering on some chairs, nothing impedes on Age of Extinction’s prowess.

Aided by remarkable contrast, metallic reflections gleam on Transformers. Sun-lit locales offer dense brightness, creating the type of range expected of this format. Highlights standout, and the plethora of sparks spewing from explosions sear onto the screen.

Age of Extinction employs less egregious color timing than previous films. Other than a series of action scenes on board an enemy ship, the film ignores bland teals and blues. Hyper saturation on Optimus Prime and colorful locations create a full slate of primaries. It’s gorgeous.

One of the earliest Dolby Atmos mixes on Blu-ray, Age of Extinction won’t age. Every scene draws power. Although bass sounds slightly loose in the opening act, things tighten up quickly. As Age of Extinction goes on, LFE tightens further, leading to a monumental finale. As a magnet sucks up metal, the pure energy drives deep into the low-end, easily some of the most powerful on any piece of home media.

Surrounds likewise match up, panning dialog, missiles, bullets, debris, and more. Age of Extinction is a directional assault. The audio dance is elegant, using the utmost precision to create an active soundfield without a break. Fun as the action is, a bit of added tension is earned via a scene where the main characters walk on anchor cables above Chicago. Those lines strain and shake from each speaker, adding to the sense of uneasiness.

Paramount includes the same Blu-ray extras disc inside the UHD packaging. This includes Evolution Within Extinction. Eight parts and two hours later, this complete peering into the background of this entire production is made clear. Scripting, cast changes, designs, effects, locations, marketing, Hasbro’s involvement; nothing is missed, nor is the disc done.

Bay on Action follows the director for 11 minutes as he discuses his methods and process. Just Another Giant Effects Movie takes 10 minutes to collect a cross section of on-set fun as mostly raw footage. A Spark of Design is where stuff takes a turn into the promotional, featuring a bevy of Hasbro designers as they work on the latest Transformers toys, from conception to the completed product. TJ Miller: Farm Hippie is a jokey bit where the comedic actor makes visits to key players on the movie. Trailers then remain.

Age of Extinction is at the peak of A/V home media, even if the movie itself is an overlong blockbuster with mixed messaging.

The 15 unaltered images below represent the Blu-ray. For an additional 32 Age of Extinction screenshots, early access to all screens (plus the 8,000+ already in our library), exclusive UHD reviews, and more, support us on Patreon.