Where the first two Transformers preached from a hyper-militaristic podium, Dark of the Moon softens to a more centrist angle. The aim is a younger audience. Older, nostalgic eyes already turned this into a franchise; they’ll return. Might as well hook a new, likely liberal generation on this property.

Released at the tail end of the recession, Dark of the Moon speaks to a younger millennial audience. Shia LeBouf’s Sam Witwicky sports an Ivy League degree but no employer. One wants to hire him for the mail room. There’s resentment pouring from Witwicky now (“I just want to matter,” he says), the first touch of legitimate character in this series. Of course this goes nowhere.

Dark of the Moon churns a pro-immigration saga, but via a repulsively moronic bit of writing. The Autobots fall from the public eye, let Decepticons murder hundreds (if not thousands) of Chicagoans, then make a triumphant return to show the American government the importance of allowing the Autobots on Earth. Optimus Prime is proud of this self-indulgent scheme. He’s also an idiot.

Although the set-up implies an ideological change, a tedious third act returns to Transformers militarism fetish. It’s different now. Dark of the Moon concerns soldiers and their duty, away from government higher ups. There’s less control. Soldiers answer to no one other than a patriotic duty, a more amiable approach to a younger generation.

To look cool, Josh Duhamel and Tyrese Gibson leap from a plane in wingsuits, straight into downtown Chicago. The pair set-up ambushes with million dollar Tomahawk missiles, an explosive savior, treated by the camera as if religious iconography. Dark of the Moon is no less a recruitment tool than the original Transformers. Unpatriotic insults remain. Revenge of the Fallen’s Decepticons knocked over an American flag. Dark of the Moon’s Megatron shreds the Lincoln Memorial in his highest national transgression.

Although bloated, Dark of the Moon offers a sliver of destructive joy possible from this series

The other outmoded tricks remain too. Megan Fox drops out. In comes Victoria Secret model Rosie Huntington-Whiteley as Carly. Witwicky is in another relationship with a broadly attractive woman, and by coincidence, she knows cars too. Even robots ogle her, apparently sharing earthly hormonal impulses. In her first scene, Carly sensually walks up stairs, the camera perversely following her legs and upward to glance a pantie shot. Later, a conversation discusses classic cars, their curves and sensuous lure. The lens stays on Carly for the duration. It’s the same character Fox played, now with a British accent.

Carly, of course, offers nothing to the greater story. She’s a damsel. Sam rescues her while Decepticons take over Chicago, ripping the city apart in Transformers’ admittedly beautiful destruction. This remains the best setpiece in the series to date, a slew of toppling buildings and mammoth urban warfare. Although bloated, Dark of the Moon offers a sliver of the destructive joy possible from this series.

Set-up for this Chicago battle reeks of inanity, asking for a contrivance on a galactic scale. Wrapped up in the ’60s space race (with an appallingly computer generated President Kennedy), Dark of the Moon suggests America landed on the moon to sniff out a crashed Transformer ship. What luck: Not only did the Transformers choose Earth after Cybertron was left in ruins, their dead planet’s debris landed nearby. Still, the chances of that happening remain higher than one of these movies being a critical success. 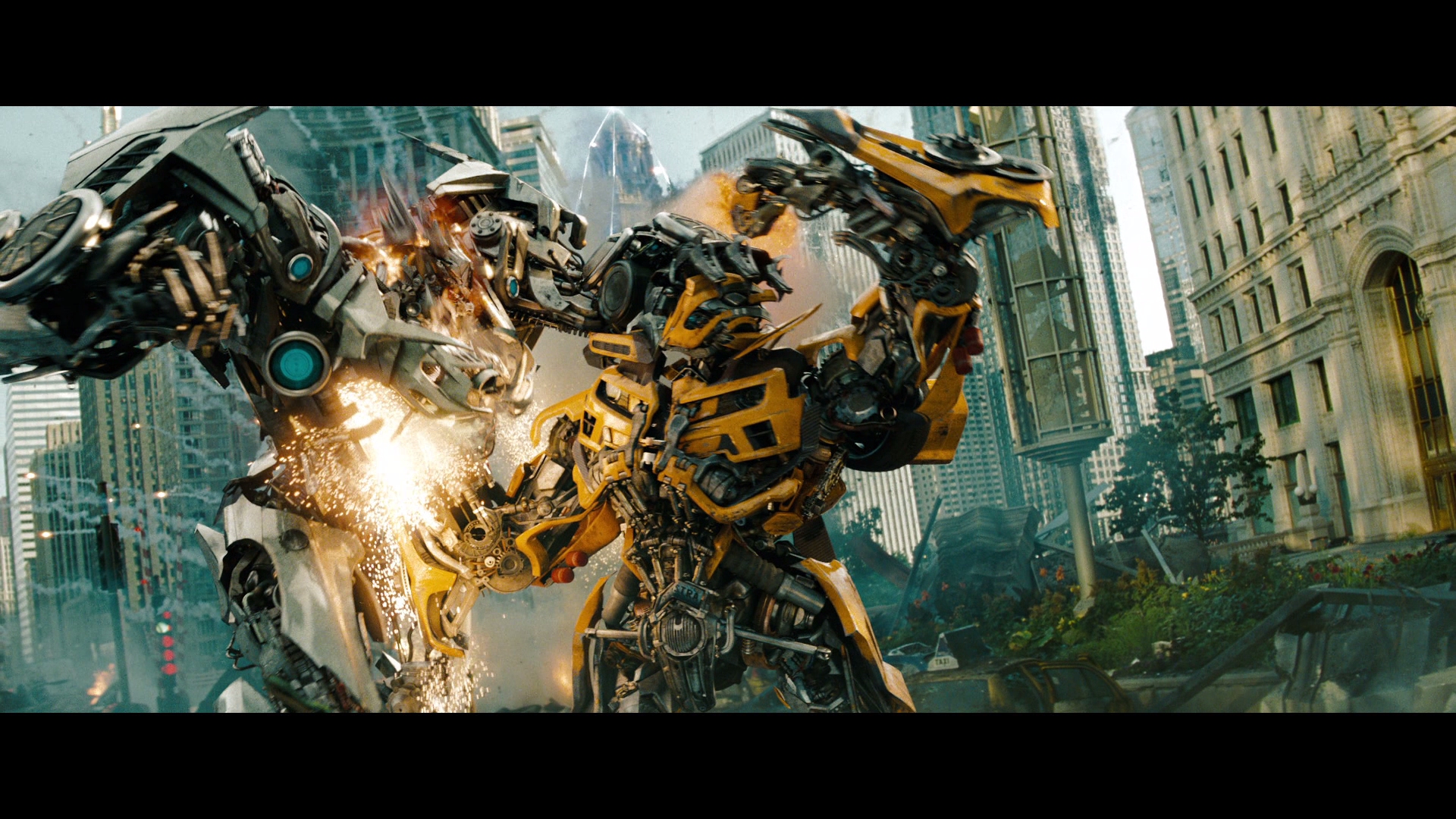 Aside from some egregious color timing choices, Dark of the Moon is a splendid UHD offering. Wrapped in deep, rich primaries that trounce the Blu-ray edition, the explosion of saturation gives new life to the color coded robots. Sentinel Prime’s bright red paint and Bumblebee’s yellows strike hard. Blue skies sit over Chicago, saturated to an extreme. A slight lessening of the orange flesh tones from previous Transformers helps too.

HDR effects sweep across the screen, the best effort from the initial Transformers trilogy. All of the sunlit exteriors requires extensive reflections and light sources. Blinding metal and heated explosions give this 2K source ridiculous depth. Black levels never give up either. The range in these visuals reaches an absurd level.

A TrueHD Blu-ray mix turns into a Dolby Atmos offering for the UHD. It’s grand. Overflowing with reference level bass and ludicrously precise tracking, Dark of the Moon’s 360 degree soundfield never lets up. The little things matter, from thrown objects bouncing between channels to robot “blood” splattering into various surrounds. Judicious use of urban combat creates a need for wide soundfield use. That’s a near constant.

With an early strike by a twisting, winding snake Decepticon, Dark of the Moon begins the audible assault. Crushing buildings and wrapping around soldiers, mixing keeps a tight balance on all elements. Dark of the Moon has no fear in digging low into LFE. Sucking air out of the room to drop Transformer footsteps or falling buildings, the chaos manages to be controlled with varying levels of force.

All bonuses carry over onto a separate disc, the same as Paramount’s initial Blu-ray. Above and Beyond is the big one, a five-part making-of with a self-congratulatory tone. Nearing two hours, nothing seems missed. Uncharted Territory digs into NASA, their history and future. It’s a nice base look at 26-minutes. Multiple effects deconstructions and production art come next, with five featurettes trailing. Unlike the prior two Transformers, Michael Bay doesn’t offer a commentary.

The 15 unaltered images below represent the Blu-ray. For an additional 26 Dark of the Moon screenshots, early access to all screens (plus the 8,000+ already in our library), exclusive UHD reviews, and more, support us on Patreon.