On the other side, a line-up of 20-something geeks and nerds (all of them white) hypnotically staring into computer screens. Each can outsmart the government’s deepest intelligence agencies. In their pack is Sam Witwicky (Shia LaBeouf), obnoxiously frazzled and hormonally overdosed. He’s the hero, obviously, an American teen with goofball parents, but destined to save Earth alongside the military. Transformers’ rueful sexism uses Megan Fox as a lure, her strangely glistening skin hovering over a Camero engine. She’s otherwise useless to the story. The other blonde, Rachel Taylor, is written out of the story partway through. Transformers didn’t really need her either because women don’t buy action figures.

Of course, Transformers features robots. Lots of them, dancing around the screen in a digital blur. Half the screen seems cut-off. There’s zero sense of placement in this 2.35:1 frame, mish-mashing digitally generated robot parts, their bullets, their missiles, into an incomprehensible visual sprawl. Excusing a few standard (and eye-rolling) hero poses, Transformers barely comprehends the thrill of blockbuster, popcorn action. Carefully planned images of helicopters rolling through the desert seem comically perfect in perfect in comparison.

That’s what Transformers exists for though. It uses a popular, hyper-nostalgic brand to lure in a stereotypically bright consumer base – the type enamored with technology – and pushes out a story of a lanky teen saving Earth. Transformers reaches out to sell Hasbro toys as much as it begs America’s brightest to join up, and in a deceptively energized post-9/11 climate. If colored terror threat levels wouldn’t work on news broadcasts, use the toys. Better still, use nostalgic toys. That’s a surefire way to subconsciously lock in the popular vote during an unpopular war.

The movie itself doesn’t matter. It’s insultingly brain dead. A Decepticon capable of digging under ground stands in the center of a battlefield, absorbing bullets. Then, the Decepticon remains there as jets bare down. For trying to paint American military intelligence in a positive light, they hide Transformers’ central plot device – the AllSpark – in the center of a populated city. It doesn’t end well for civilians, but it looks cool. Military characters stand firm, jets throw bombs at robot immigrants, and tanks fire off rounds to create more noise. It’s the American way. 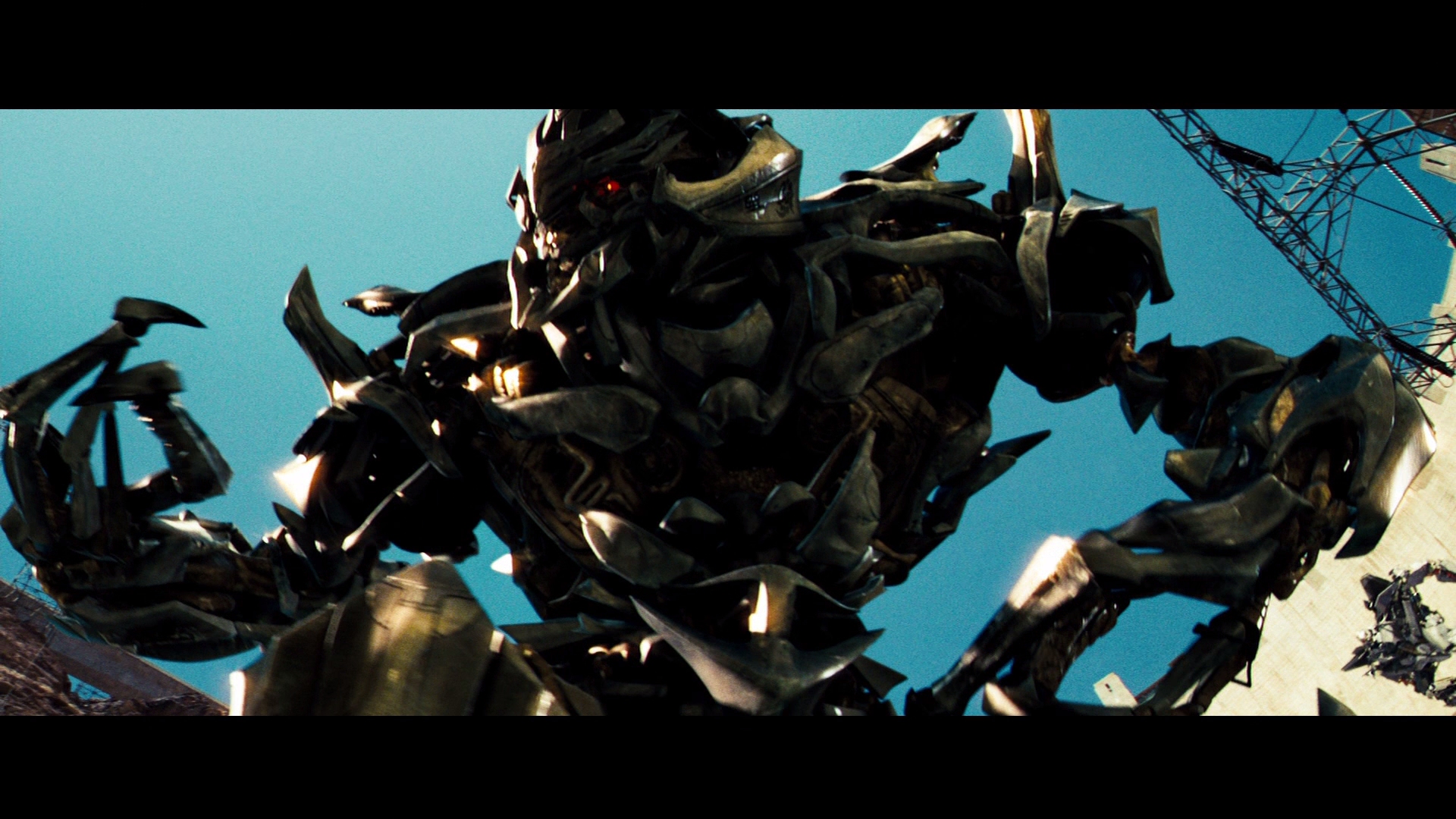 The first Transformers, and with it almost any Michael Bay production, suits itself to UHD. Or, more specifically, Dolby Vision. Heavy contrast begs for the deepened shadows and highlights. Transformers offered plenty of both on release. Some things don’t change. There remains some crush, albeit minor. Bold contrast adds to sun-reflecting metal, charged up arms fire, and explosions. Desert sunsets look glorious on this format.

Finished at 2K from a film-based source, the disc needs to resolve a varying grain structure. Generally, it’s consistent and clean. An intel meeting with Rachel Taylor endures a heavy spike, a rare uptick. Some high contrast ringing impacts a few early shots of silhouetted soldiers. That issues passes quickly too.

A handful of scenes deal with some softened cinematography, but otherwise, Bay’s penchant for hyper-sharp images hides the 2K source well. Superb definition rolls across the screen, drenching Transformers in fidelity. Stunning CG robots bend toward the camera, getting close to reveal moving gears and small details. Scenery likewise shows off, from the city to various other landmarks. Transformers doesn’t lose its eye for resolution.

Remixed for Atmos, Transformers is given renewed life over the TrueHD 5.1 mix of old. The expanded soundfield naturally pans action around. In the opening battle, erupting across a military base, bullets and debris pan in all directions. Awesome, generous bass adds incredible weight. A desert brawl involves jets blasting a Decepticon with missiles. Jet engines roar, missiles connect with force, and bullets pan across the soundfield.

Unlike the later films in the series, the first Transformers isn’t quite as saturated with set pieces. The few included though earn a stamp of aural perfection. The mix misses nothing. Even during dialog, Bay’s senselessly sweeping camera demands that voices reach every speaker. Hearing Hugo Weaving’s voice sprout from the center rears is a treat. There’s additional LFE support along with his words too.

On the UHD, Michael Bay’s Blu-ray commentary transfers over. The two included Blu-rays are identical to the original Blu-ray release. That means the same commentary and a pop-up HUD feature on the first disc. On the second, some two hours of documentaries, covering the origins, the designs, the actors, the shoot, and a bevy other material. It’s more interesting than the feature itself.

The 15 unaltered images below represent the Blu-ray. For an additional 25 Transformers screenshots, early access to all screens (plus the 8,000+ already in our library), exclusive UHD reviews, and more, support us on Patreon.