Expect little else than mindless, profane entertainment from Hitman’s Bodyguard. It hardly offers a plot, the action barely rises above predictable, and the location scenery across Amsterdam rarely matters.

Dumb and brainless is all that Hitman’s Bodyguard needs though, along with 122 f-bombs from Samuel L. Jackson. Ryan Reynolds tosses in a bunch more too. The total is near 300 combined.

Credited to writer Tom O’Connor, the script falls back on a slew of ‘90s era buddy tropes. Hitman’s Bodyguard subsists on those genre films. Think the sour Adam Sandler/Damon Wayans flick Bulletproof, if with a touch more pizazz and infinitely stronger action.

Everything in Hitman’s Bodyguard sits on the shoulders of Jackson and co-star Ryan Reynolds. Their adversarial and definitively male relationship leads to a slew of off-color barbs directed toward one another. Jackson, a lifelong hitman for hire, delights in aggravating his impromptu bodyguard. He sings, he claps, he throws out put downs; at one point, he throws Reynolds through a windshield. It’s that kind of movie.

It’s also of the type where an improbable number of Russian villains parade around Amsterdam in daylight, firing assault rifle rounds without ever hitting their targets. Mostly, villains in Hitman’s Bodyguard exist as a targets. Without them, Reynolds couldn’t engage in a single take hardware store melee and Jackson couldn’t plow through a canal’s lover’s lane in a speedboat. What joy this movie takes in killing and breaking things.

Give minimal cause for action, act on the action. That’s all Hitman’s Bodyguard wants to do

Jackson and Reynolds pair for a road trip saga, barreling toward a courthouse to convict a Russian dictator (Gary Oldman, complete with accent). Some internal Interpol strife acts as set dressing; Hitman’s Bodyguard doesn’t rise above the level of narrative simpleton. Give minimal cause for action, act on the action. That’s all Hitman’s Bodyguard wants to do.

In the wider perspective, Hitman’s Bodyguard wants the “guy movie” designation. It uses Selma Hayek for her cleavage and Elodie Yung as a romantic beacon for Reynolds to chase. The rest exists so two dudes can form an unstable relationship out of respect. Some of this comes through skill, but most through disparaging remarks. All of the blood and gore patterns itself as a throwback spectacle.

If John Wick is contemporary, classy action cinema, Hitman’s Bodyguard reinvigorates the juvenile splendor of say, a tightly budgeted Bad Boys. Hitman’s Bodyguard plays to formula, almost guarded as a way to bring on feelings of nostalgia. It works, primarily because Jackson and Reynolds were made for these parts. 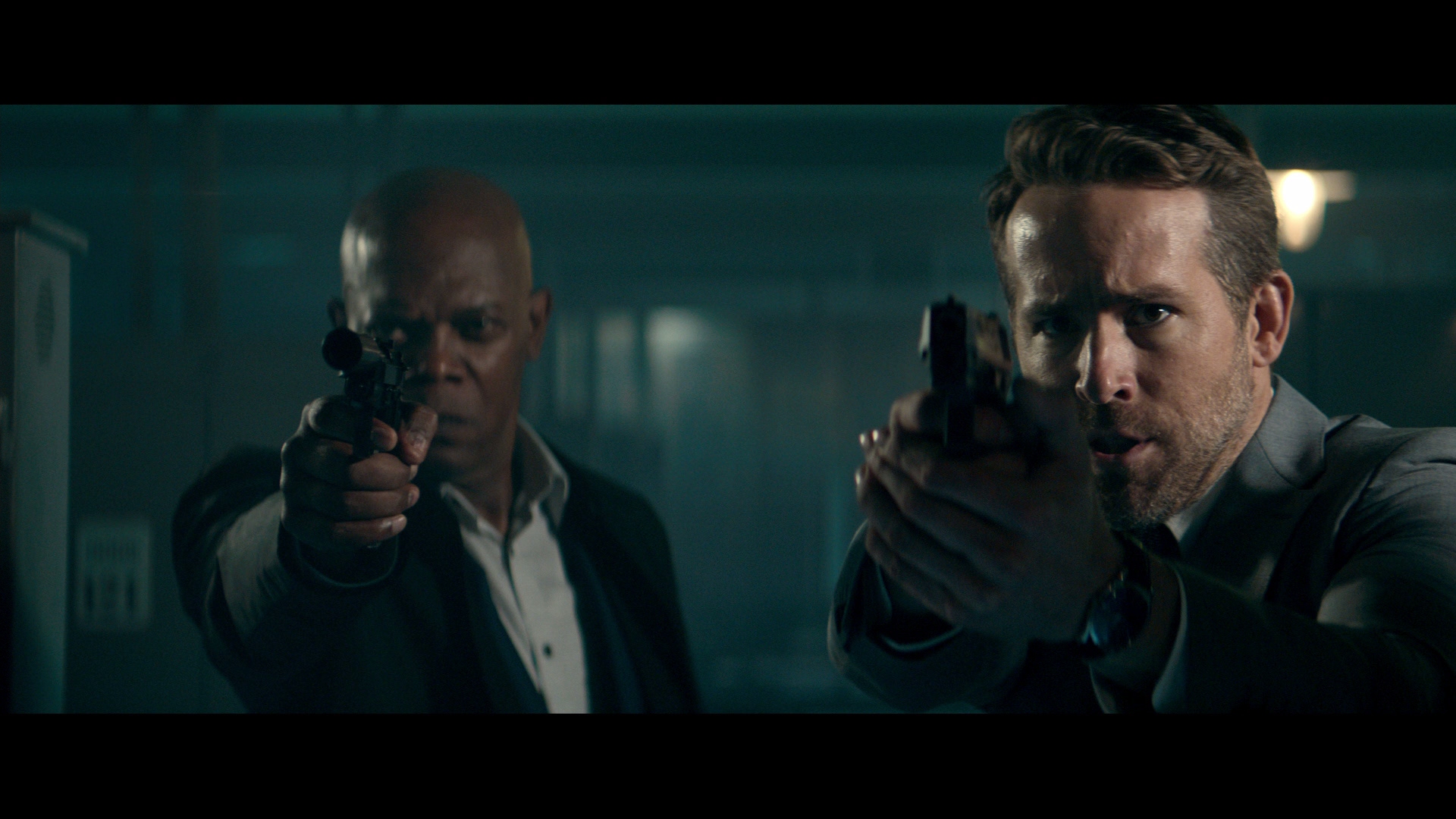 From a nearly 4K source, Hitman’s Bodyguard offers passable fidelity. Plenty of sharp close-ups make up a portion of this movie. The real eye candy comes from the aerial views of Amsterdam, the obvious CG helicopters panning by notwithstanding. Buildings for miles resolve cleanly, giving some gorgeous views of the country’s skylines. No aliasing or other anomaly ruins the visual party either.

Despite a bit of crush during a nighttime shootout, black levels provide the necessary depth. Dolby Vision HDR effects lean conservative overall, lacking the brightest contrast or highlights. Despite some daytime and well lit action scenes, the lack of zest adds a little disappointment. The use of filters to add extensive bloom takes some of the pop with it.

Summit’s encode will fend off artificial grain. A number of flashbacks use a 16mm-esque look. That challenge is met and conquered, keeping detail high without a loss of definition. Even out of flashbacks, many scenes employ light digital grain. Strong encoding keeps it at bay.

Pasty flesh tones and dour color timing give Hitman’s Bodyguard a sickly gloss. Color timing choices leave the images pale, even lacking life until the third act comes around. At least some primaries become involved then.

Artificial grain creates a challenge for the Blu-ray. Rarely does the grain look authentic, more or less devolving into noise. Luckily, any loss of fidelity as a result is minor.

Both formats use Atmos tracks, an aggressive mix with a strong soundstage. Gunfire passes through each speaker during big shootouts, tracking even off-screen. Despite mild dynamic range overall, there’s enough kick to the varied explosions to keep this material zesty.

During a key car chase late, panning effects flawlessly track vehicle motion. Environments create a difference in elevation, creating a difficult mix to maintain. Yet, Hitman’s Bodyguard keeps everything natural and flowing. The front soundstage is as active as the rears.

Director Patrick Hughes begins the bonuses via commentary, the menu then proceeding into a five minute outtake reel (it’s unusually dry for a movie like this). Four deleted, four extended, and two alternate scenes continue from there. Featurettes begin with A Love Story, detailing the two main characters. Dangerous Women gives a moment to Selma Hayek and Elodie Yung. The third featurette, Big Action in a Big World, looks into the key setpieces. These all run around eight minutes each. The four minute Hitman vs. Bodyguard is nothing more than an extended trailer.

Samuel L. Jackson and Ryan Reynolds have a blast in Hitman’s Bodyguard, a successful throwback to the ’90s buddy action genre.

The 15 unaltered images below represent the Blu-ray. For an additional 13 Hitman’s Bodyguard screenshots, early access to all screens (plus the 8,000+ already in our library), exclusive UHD reviews, and more, support us on Patreon.