Released as part of the Sissi Collection from Film Movement, Sissi is the delightful period film that turned actress Romy Schneider into an international star at seventeen. Her upbeat, beguiling portrayal of Princess Elisabeth marrying Emperor Franz Joseph of Austria as a teenager instantly won audiences over.

A wholesome, sweet film bolstered by lavish production values, Sissi is enjoyable romantic fluff from 1955. This first entry in the Sissi film trilogy comes from a simpler time with a different set of mores than today’s Hollywood entertainment. All three German films were written and directed by Ernst Marischka.

Sissi (Romy Schneider) is little more than a country girl living in Bavaria, despite being a princess. She enjoys the outdoors and her favorite hobby, horse riding. Far removed from the court of Emperor Franz Joseph (Karlheinz Böhm), she is happy living with her close-knit family. The Emperor is busy running the Hapsburg empire when his mother Sophie (Vilma Degischer) decides it’s time to arrange a marriage for him. Sissi’s mother is sisters with Sophie. The manipulative Sophie decides Sissi’s older sister Helene should marry her son, the Emperor. Sissi barely registers on their radar.

By sheer accident, Sissi meets Franz Joseph on her own as her family visits the city. Love will soon blossom between the pair, despite the impending engagement between her sister and Franz Joseph. Sissi’s ignorance of court customs leads her into conflict with the very formal Sophie, who disapproves of the teenager. Sissi is not used to the established social order in the Austrian court. Sissi being a romantic fantasy through and through, it’s not hard to guess that love will win the day.

Sissi is a real crowd-pleaser

It’s not hard seeing why Sissi became an instant hit in 1955. The scenic photography of Austria and Germany, its lavish costumes, an appealing romantic fantasy of a young princess marrying the gentlemanly Emperor, Sissi is a real crowd-pleaser. I imagine every 12-year-old girl that watched this movie in the 1950s lived vicariously through Sissi. Her journey from a simple, carefree princess to Empress of Austria must have been their ultimate fantasy.

The period film sings with a rich atmosphere and scenery rarely matched by Hollywood. It just looks different in staging, from the opulent rooms of Emperor Franz Joseph to a spectacular wedding finale. Seeing Sissi riding horses through the forests of Bavaria, everything actually feels like its 1854 setting. Everyone is so impressed by the new telegraph technology.

Anyone into the bright, colorful Hollywood musicals of the era should love Sissi. This is delightful family entertainment from the 1950s and remains a popular classic. 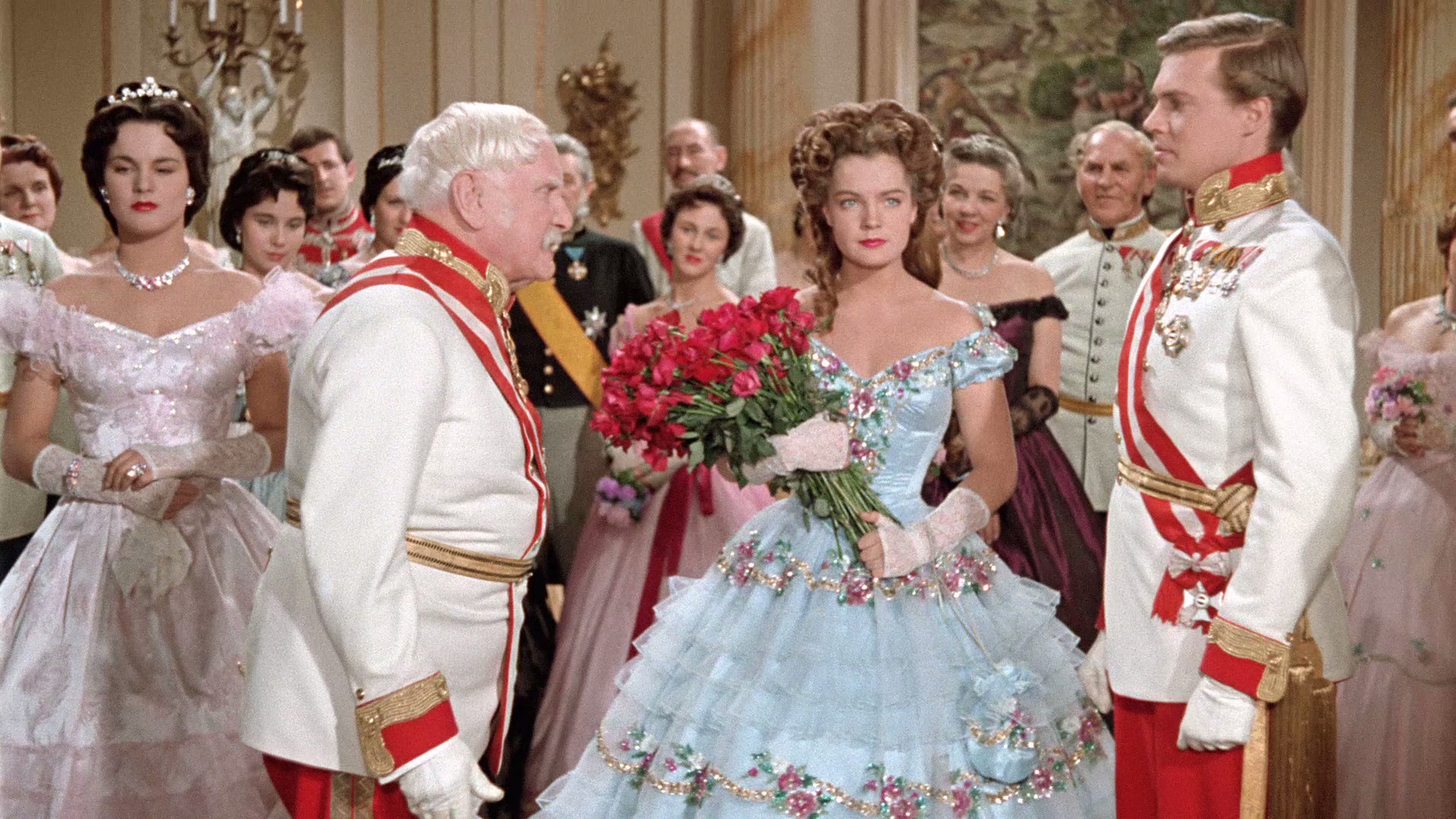 Filmed in Agfacolor, a color film technology produced in Germany, all three Sissi films are presented in both their original Academy Ratio and 1.78:1 widescreen transfers. Agfacolor was used in a few Hollywood productions, including a slew of musicals in the 1950s such as Brigadoon and Seven Brides For Seven Brothers. While not quite on par with the more familiar Technicolor process, these Agfacolor films offer a rich palette and tight saturation that suits their stunning location photography. Each of the films gets their own BD-50, encoded in transparent AVC at decent parameters. Film Movement has done a great job bringing these films to Blu-ray in quality presentations.

The Sissi movies and Victoria In Dover have all been given new 2K film restorations by ARRI Film & TV Restoration Services in conjunction with Taurus Media Digital. This is fine work from strong elements. The film transfers include a hint of mild processing, most notable in the blown-up 1.78:1 widescreen transfers taken from the original 1.37:1 elements. The new scan captures the film grain off guard in a few scattered moments, looking processed. It’s most evident in the opening reel of Sissi, offering a glimpse of edge enhancement that thankfully disappears soon after. Call me a videophile heretic, but the widescreen transfers perform an excellent job of translating the original 1.37:1 compositions.

There are surround elements in this mix, surprisingly enough. Not everything is kept to the front soundstage. The sound design isn’t particularly balanced, awkwardly placing some cues to the detriment of other elements. It provides a decent listening experience but the lack of the original stereo mix is unfortunate.

An interesting tidbit of trivia concerns The Emperor Waltz getting played as background music in Sissi during Franz Joseph’s wedding dance in 1854. The Emperor Waltz wasn’t composed by Johann Strauss II until 1889.

An instant smash upon release in 1955, Sissi is delightful 1950’s filmmaking with an incandescent Romy Schneider lighting up the screen as a teenage princess in love.

The unaltered images below represent the Blu-ray. For an additional seven Sissi screenshots, early access to all screens (plus the 8,000+ already in our library), exclusive UHD reviews, and more, support us on Patreon.