Jimmy Logan isn’t lucky. That’s the joke, or “a” joke anyway. Logan Lucky has bunches of successful gags. Jimmy’s (Channing Tatum) life is filled with misfortune (also a joke). He was an NFL prospect until he busted a knee. He was married, but that ended in divorce. He had a job, but got fired; the knee ruined that one.

Logan is gutsy though. Along with his one-armed brother, the awkward and stereotypical good ol’ Southern boys plot to rob the NASCAR Coca-Cola 600. Just as Logan isn’t lucky, Logan Lucky isn’t about a group of dim-witted hicks either. These boys is intelligent.

The whip-smart script for Logan Lucky spills out into a heist film The misdirection begins immediately, unbeknownst to the viewer. From the outset, the plan forms. Inane conversation and director Steven Soderbergh’s quirkiness steer toward the implausible scheme’s finish.

No one catches on. Logan Lucky’s grand plot is invoking of class-ism, letting a viewer’s smug superiority complex guide the way. Two characters play horseshoes with toilet seats. Almost all of them drive rusted trucks, assuming they haven’t ended up behind bars. None of them own homes, just trailers. In Logan Lucky’s cinematic eyes, this goofball crew make up a band of contemporary folk heroes and it’s hard not to smile at their escapades.

Hilary Swank drops in for a third-act take over, and if the already odd mixture of Channing Tatum, Daniel Craig, Adam Driver, and Seth McFarlane seems out of place, add in a Best Actress. Swank sends Logan Lucky home with memorable force, developing her character in under 15 minutes of screen time, a straight-shooting FBI investigator certain to find the heist crew. 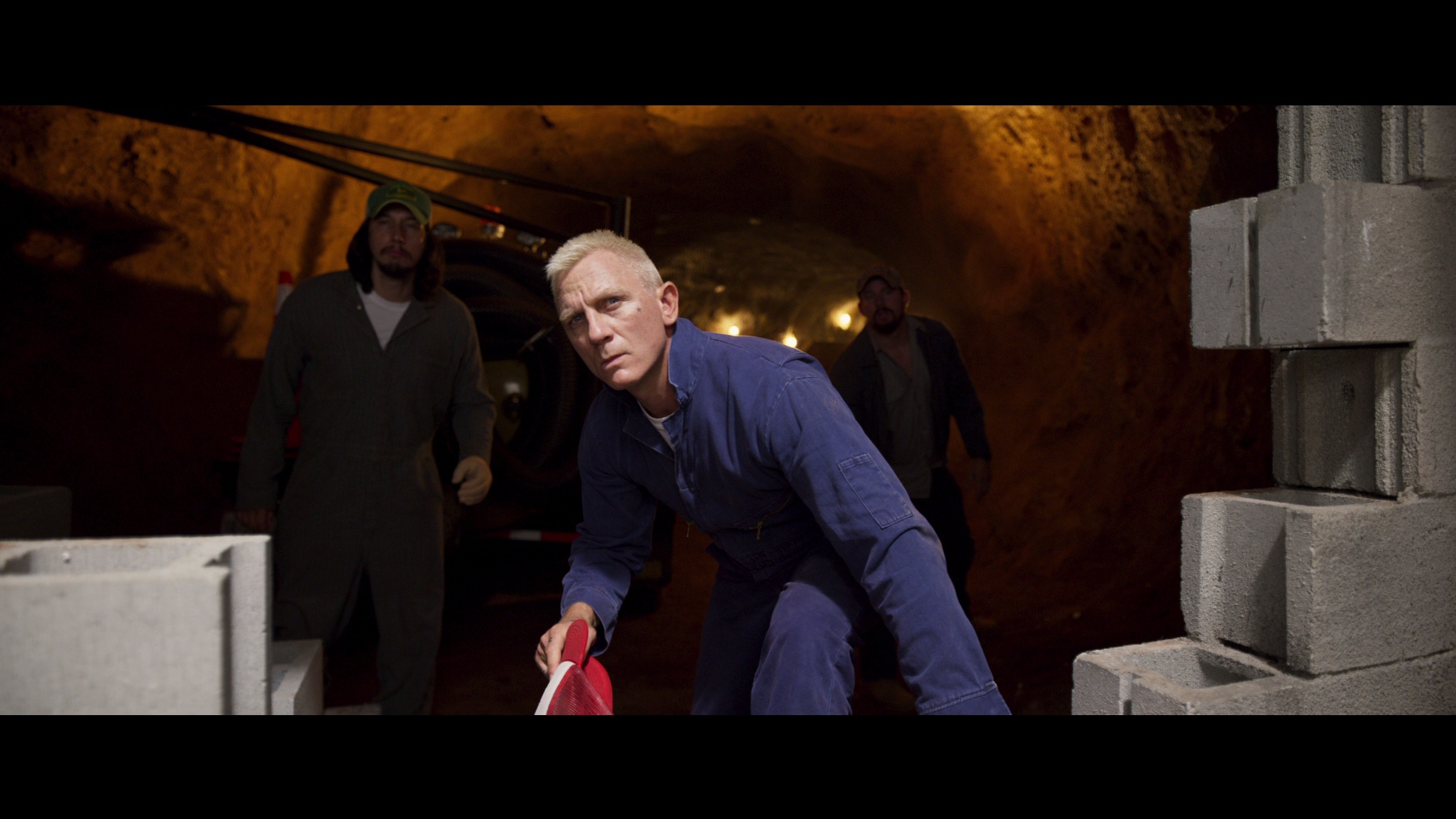 Courtesy of the Red Epic Dragon, Logan Lucky is a 4K visual delight. In fact, it’s near flawless, if not for a bit of black level sagginess when underground. From the outset, the visual presentation pushes a benchmark for sharpness and contrast. Detail in the environments breaks out into a new standard for this format. Look at pattern on Riley Keough’s shirt as she’s first introduced in the salon. Every stitch is visible in full.

Location scenery, especially the speedway, floods the screen with detail. The day NASCAR and sports in general feed into living rooms in 4K will be a joyous one if Logan Lucky is a peek into the future. Houses and their brickwork display marvelous definition. Look at the grass during the local fair – every blade is given proper due.

Much of Logan Lucky bathes in contrast too, soaked by sunlight and reserved enough as to not blot out details. It’s a constant stream of brightness. Only when moving underground does Logan Lucky lose anything. Black levels fade in their luster, falling off into a blue/gray. The slightest noise becomes apparent in those shadows.

Universal’s disc otherwise maintains clear imagery without any concerning issues. A slight flicker on a striped shirt barely warrants a mention. That’s one for perfectionists to call out. Besides, when surrounded by such lavish fine detail, impeccable sharpness, and striking contrast, one shirt relegated to one scene is a fair price.

Logan Lucky’s attraction to high contrast bothers the Blu-ray edition. Exteriors struggle to preserve details in the highlights, fading detail on, for example, brickwork. When Tatum first visits his ex’s home, the establishing shot looks nearly bleached out. One scene of Tatum’s on-screen daughter bleaches the poor girl’s face. All that’s seen are her eyes and lips.

Luckily, things like like color and other detail help the Blu-ray. Close-ups resolve substantial high-frequency information. Clarity is high, with only minimal noise courtesy of Universal’s encode. Black levels do weaken once underground, if not enough to ruin the rest of the imagery.

Both discs use a DTS-HD 5.1 mix, a bit unacceptable these days for UHD or Blu-ray. Dryly comedic, Logan Lucky isn’t found of exciting audio beyond the center channel. Dialog reproduction offers a precise reproduction of the source, just one that never leaves the front.

Ambient effects in bars slip into the surrounds. Chatter from patrons or clinking glasses give the scenes space. The biggest use of the rear channels happens during the race itself. As the heist begins, surrounds pick up cars on the track above, panning them side-to-side as they pass. Likewise, shots from the track itself add some audible momentum too. No real LFE to discuss though outside of some musical cues.

Two deleted scenes that run for four minutes – that’s it. Ask the bear in the forest for more.

Steven Soderbergh’s eccentric Logan Lucky is a heist movie all the way through, although you wouldn’t think so at first.

The 15 unaltered images below represent the Blu-ray. For an additional 12 Logan Lucky screenshots, early access to all screens (plus the 8,000+ already in our library), exclusive UHD reviews, and more, support us on Patreon.