Jack the Ripper On Steroids

A series of grisly murders have shaken the Limehouse district in London, leading residents to believe a mythical Golem from Jewish lore is responsible and leaving Scotland Yard baffled. The Limehouse Golem is a dark crime thriller set in the Victorian period before Jack the Ripper’s notorious killing spree. Olivia Cooke (Bates Motel) and Bill Nighy (Love Actually) star in this tightly scripted murder mystery from director Juan Carlos Medina. The rest of the cast includes Douglas Booth, María Valverde, and Eddie Marsan.

Part of its pedigree includes screenwriter Jane Goldman, who wrote the screenplays for The Woman in Black, X-Men: Days of Future Past and Kingsman: The Secret Service. She adapted this screenplay from the 1994 novel Dan Leno and the Limehouse Golem by Peter Ackroyd.

The city of London is gripped with fear as a gruesome serial killer is on the loose and leaving cryptic messages written in blood.  Styled after Jack the Ripper, the Limehouse Golem’s crime scenes are bloodbaths. With few leads and increasing pressure from the public, Scotland Yard assigns the case to Inspector Kildare (Bill Nighy). He’s a seasoned detective with a problematic past. He also may have been given the job to serve as a scapegoat. Faced with a long list of suspects, including music hall star Dan Leno (Douglas Booth), Kildare seeks help from a witness who is standing trial for her husband’s murder. She may provide the final evidence necessary to find the dreaded Limehouse Golem.

Kildare’s investigation points to John Cree, a failed playwright, as the Limehouse Golem. That leads Kildare to his wife Lizzie Cree (Olivia Cooke), now standing trial for John Cree’s murder by poisoning. The former music hall actress and performer has a complicated background that is told to Kildare in hopes it will aid his Golem investigation and possibly exonerate her from hanging.

The Limehouse Golem is willing to tackle shockingly gruesome murders

The dense script tackles the Golem mystery in a roundabout manner, wrapping up Kildare’s investigation into Lizzie’s plight and trial. This is not a prim and proper period mystery. The Limehouse Golem is willing to tackle shockingly gruesome murders, rape, and a macabre atmosphere in visceral detail. We learn Lizzie’s sad upbringing and her eventual rise to fame under the guidance of music hall star Dan Leno, including John Cree’s troubled courtship. Exuberant attention is paid to the rich production design, set in a moody London that screams Jack the Ripper.

The cast is solid, leaning on Bill Nighy’s experience and Olivia Cooke’s sympathetic performance. One could quibble that director Juan Carlos Medina goes overboard with his direction. The period thriller whipsaws back and forth in the leisurely paced plot from standard procedural dross to disturbing horror. It’s a credit to the lead actors they keep things stable and interesting.

The Limehouse Golem does have its quirks but will certainly catch some viewers by surprise with its more clever moments. Some may get upset with the final reveal of the killer in an odd sequence that goes over the top. However, the journey getting there is well worth it. This is not your father’s stodgy period mystery but an in-your-face thriller that grabs you by the throat. 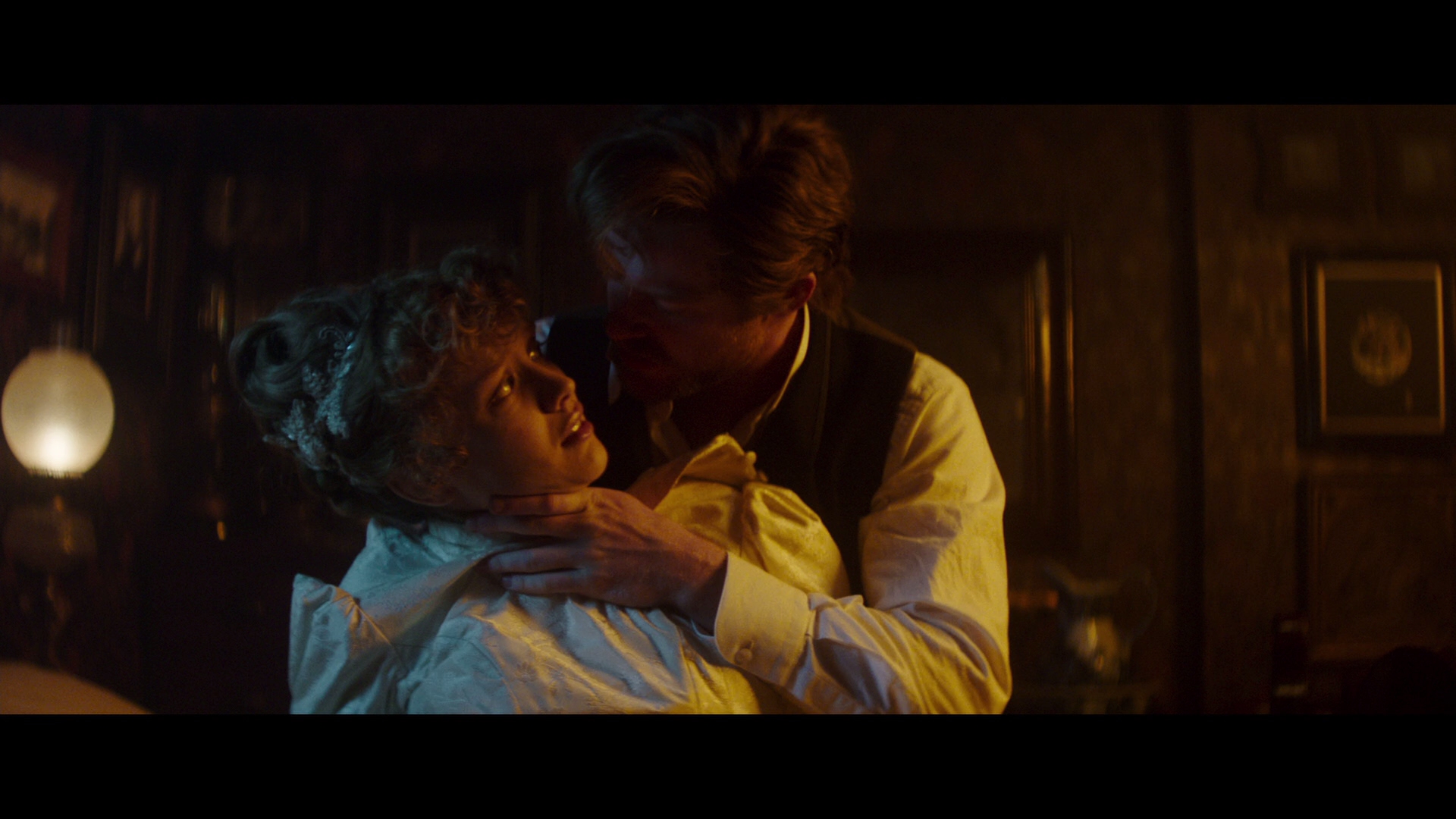 The Limehouse Golem crosses the grim styling of Seven with a sinister London in 1880. The period crime thriller oozes a dark atmosphere with its distinctive color tone and palette. Using Todd-AO lenses, the film isn’t razor-sharp. This is throwback filmmaking that pulls the viewer into its seedy setting. Rich black levels offer fine shadow delineation. There is a hint of teal to the color palette in its darker textures.

No serious processing has been done that would take away from its cinematography, outside of the distinctive color grading. A steady, even contrast highlights the high degree of clarity, even if close-ups lack the extraordinary high-frequency content of the latest Hollywood blockbusters.

RLJ Entertainment does a solid job translating the film’s 2K digital intermediate to 1080P resolution. Presented in its original 2.35:1 aspect ratio, the 108-minute main feature is encoded in a satisfactory AVC encode. It doesn’t push the limits of the BD-25 but capably handles the more difficult moments without artifacts.

The Limehouse Golem has fairly impressive 5.1 DTS-HD MA audio. There is an active presence and body to the sound design that adds real weight to the movie. This surround mix is heavily atmospheric with many scenes filling the rear soundstage.

It is a lively and involving mix more suited to the horror genre than a normal period mystery. The dialogue is cleanly anchored in the dynamically mastered audio. Clean, crisp fidelity help the music hall scenes come alive.

Optional English SDH subtitles appear in a white font, remaining inside the 2.35:1 video at all times.

RLJ Entertainment fills out this disc with several tidy behind-the-scenes featurettes with the participation of cast and crew members. They give brief glimpses into making the movie with insights from director Juan Carlos Medina and screenplay writer Jane Goldman. All the lead cast members appear in some capacity. These aren’t in-depth featurettes, lightly covering each topic.

Initial pressings include a slipcover. Several trailers precede the main menu for I.T., Devil’s Knot, Dark Was The Night, and Blood.

The Making of The Limehouse Golem (06:26 in HD) – A cursory exploration into the project’s background with input from cast and crew.

The Look of The Limehouse Golem (02:41 in HD) – The film’s distinctly stylized Victorian London is discussed.

The Locations of The Limehouse Golem (02:30 in HD)

A brutal crime thriller in 1880 London that evokes Jack the Ripper on steroids. It’s an entertaining mystery with interesting characters, even if there are some plot holes.

The unaltered images below represent the Blu-ray. For an additional 14 Limehouse Golem screenshots, early access to all screens (plus the 8,000+ already in our library), exclusive UHD reviews, and more, support us on Patreon.