Atomic Blonde’s grandest sequence is a near 10-minute, seamlessly edited brawl. With a self-contained narrative – Charlize Theron desperate to save the life of a key MI6 contact – Atomic Blonde ignites with sensational choreography. It’s unusual in Western action to elegantly allow the fight to breathe on screen. Steadicam work sits in place, almost leisurely following the fight.

Theron puts in work as MI6 agent Lorraine, both a feminine seductress and roughened brawler. Her character slips into an archetype as much as she slips out of her clothes. (That’s often.) Atomic Blonde expects a lot of from this role, skin included.

Through smoky scenery, bordered by the Berlin Wall days before its collapse, Atomic Blonde washes itself in tired ‘80s nostalgia. It’s too much. One fight punches through a George Michael ballad. Atomic Blonde’s Cold War setting, still historically perfect for a spy saga, isn’t necessarily interested in Berlin. The east/west conflict is background dressing. The rest exists to ping the ‘80s pop hits – and some of them in Russian.

At times, Atomic Blonde adores the darkly comedic. Theron relishes the chance to portray an intelligent, indifferent, and often bitchy character. Theron sits under heated lights, staring down her superiors as the story unravels in flashback. She’s grilled over (if indifferent toward) her failures attempting to retrieve CIA microfilm, the latter Atomic Blonde’s MacGuffin.

Getting to the current is rife with bloodletting. Theron’s opposition leaves a number of problematic stains on the carpeting. It’s not all guns either; hand-to-hand brawls use ample muscle. In-between the memorable fights, the “trust no one” scenario dryly plays out, littered with ambient complexity that isn’t difficult to decipher. A romance allows Theron’s Lorraine a touch of humanity to warm up her often cold exterior, the strongest bit of character development offered by Atomic Blonde.

Cinematography, credited to John Wick photographer Johnathan Sela, gives Atomic Blonde a sassy style. That’s memorable. Lorraine spends time in a neon-lit apartment. The camera uses this for accentuation. And the fights too – Sela gives them oomph and weight, often unforgettable in the sense of a Western produced studio film.

The rest sags though, caught up in its own unimpressive headiness. Made out as a woman-led John Wick (and not because of the cinematographer), that’s a disingenuous comparison. Wick’s world exists in a different plane and he’s almost a perfectionist. Lorraine comes from a historical reality. She’s flawed. Punches from her opponents frequently land. This is not a friendly place, even if the politics serve as mere drapery. It’s cruel and obscene, if not always engaging. 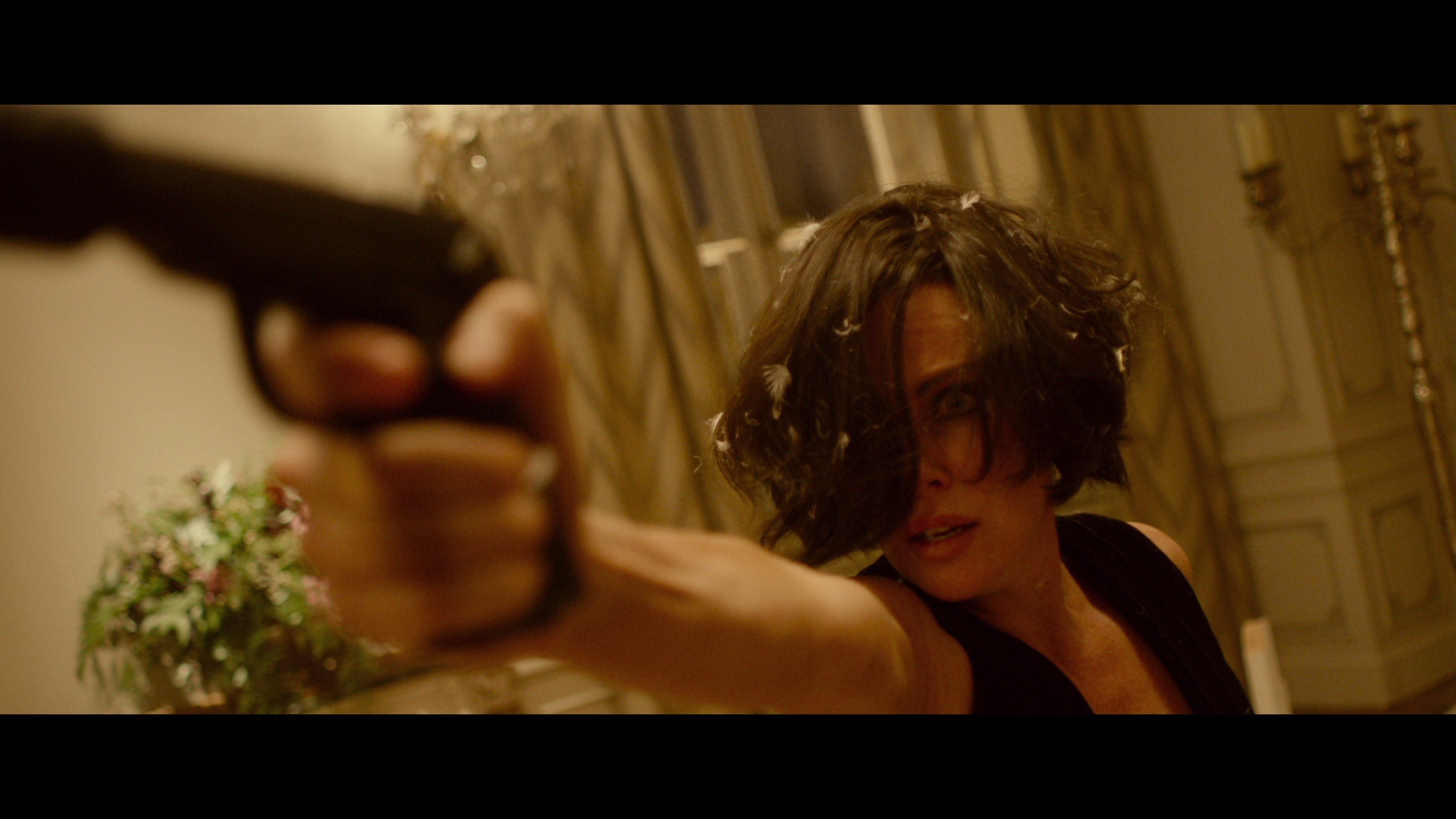 The coloring in Atomic Blonde revolves around a handful of hues. There’s blue, teal, a bit of orange, and intense red. Each of these takes over specific scenes. The aggressiveness leads to a frequent sense of monochromatic palettes. Forget flesh tones. Atomic Blonde rarely uses them.

On UHD, these singular grading choices do carry intensity. Reds especially look vibrant, near bleeding without going over that edge. Deep blues add mood, and a handful of warmer scenes (the finale included) do use a bit of primary saturation.

Much is helped along by superb shadows, helping add depth to the darkest scenes. In the opening, a man runs through an alleyway at night. With little contrast to help, everything falls on the black levels. They work overtime and still present details. Likewise, a heavy contrast comes into play. It’s hard not to notice the heavy HDR applied to the interrogation scenes. Theron’s hair is nearly blown out by the overhead lighting. Expect neon and city shots to dazzle with their light shows.

Without the color density of the UHD, the Blu-ray loses zest. Color needs some additional weight. Atomic Blonde looks generally pale on this format. Some of that can be blamed on the black levels. They tend to crush when in the shadows, losing contrast.

Both formats include a precise DTS:X mix. It’s active when it needs to be. Bullets strike in proper channels with unusual weight, pronounced down to individual shells. Each shot takes prominence in the mix. Hand-to-hand fights stay tighter in the stereos, usually with the music taking precedence in the mix.

This isn’t a consistently active soundstage, but the DTS:X track performs admirably. Active airports and bars elevate the track. Protests fill the speakers in every direction.

LFE support typically finds a home within the music. Since most of the action is sonically low-key (no explosions or such), that’s all Atomic Blonde needs.

On either disc, a commentary from director David Leitch and editor Elisabet Ronaldsdottir is available. The rest of the extras come on the Blu-ray. Six deleted/extended scenes last seven minutes. Welcome to Berlin begins a series of short featurettes, this one four minutes about the location and politics of the period. Blondes Have More Gun discusses Lorraine and the action scenes for seven minutes. Leitch earns his own bonus in Spymaster, this one four minutes.

The 15 unaltered images below represent the Blu-ray. For an additional 16 Atomic Blonde screenshots, early access to all screens (plus the 8,000+ already in our library), exclusive UHD reviews, and more, support us on Patreon.