The two leads do not literally embody Christian ideals. Elba’s Roland, six-shooters always on his person, walks craggy wastelands like the best western stars. McConaughey plays Walter, underworld (or mid-world as they call it) supreme ruler. It’s their personalities that embrace typified good and evil. With a flick of a wrist, McConaughey suffocates his victims. He commands two people to kill one another, bringing out the evil buried inside.

Roland’s counter-acting, over-dressed good guy is absolutely plain. Since Walter killed his father, there’s a smidgen of the revenge western here, but Roland is the plainest of screen good guys. In his midst is a teenager boy, ridiculed for mental health issues on our Earth. Once through a portal into mid-earth, that kid – Jake (Tom Taylor) – becomes an inadvertent orphan. Roland becomes the protective father.

Behind the excuses for brief action flare-ups is muddy lore. Dark Tower spends limited time establishing the worlds that comprise this universe. At 90-minutes, Dark Tower feels like it’s on fast-forward with sloppy story composition and that blazing pace almost covering up the Tower itself. The monolith figure prevents evil from flourishing (somehow, anyway) and only psychic kids can break down the spiky structure. Why just kids? Unexplained. How does the tower work? Also unnoticed.

Undoubtedly expanded in Stephen King’s seven-part book series, the film adaptation acts like a skipping stone over an ocean of material. Said rock lands where absolutely necessary. Everything else is viewed as a distraction, critical to the greater Dark Tower story-verse or not.

Whatever intentions lie within the script with regards to the Jesus/Satan aspects flounder in this context. It’s all too simple. Dark Tower tries to bring in the ideals of modern superhero cinema (Roland’s gunslinging is clearly a super power), but lacks the depth. Walter’s intentions skew pure evil, perfect to show his devilish magic, not so much for the child-like characterizations. Saturday morning cartoons exhibited more depth in their villains, and their plots had twice as much fictional intrigue. 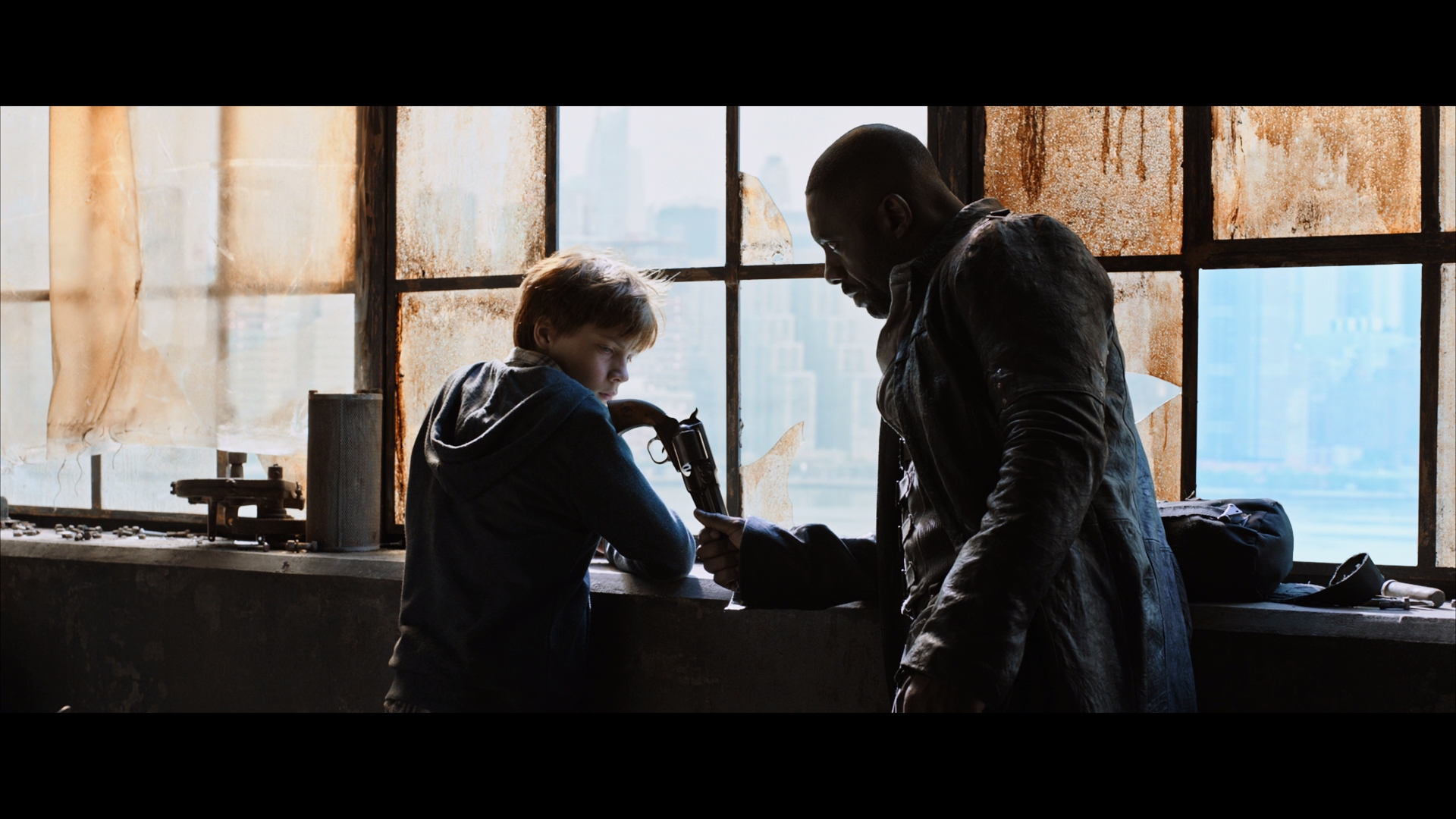 From a true 4K source comes this absolutely gorgeous transfer. Dark Tower lights up with fidelity, rendering facial definition at incredible levels. Aside from brief low resolution city scenes, environments reach the same levels of clarity. Rocks and deserts look stunning. The sharpness visible here is both natural and special.

While muted in color, Dark Tower specializes in aggressive contrast. While frequently leading to a bleaching effect, it’s also presenting an image high in HDR effects. The sun-lit scenes (even indoors) keeps a heavy layer of brightness on screen. When night falls, delicate black levels fall into place. Shadows capture both depth and detail.

With thick, firm detail, Dark Tower pushes the format to its likely limits. Visual definition peaks at the possibility of 1080p. Awesome high-frequency information streams onto the screen without problems.

Dark Tower’s high-contrast source only helps, even if there’s a loss in the brightest whites. Some crush is evident too. Still, depth holds together throughout, delivering well contrasted scenery. A little noise, particularly in Jake’s home, is easily ignored; it’s not blocking any detail.

Sony’s tactic of providing Atmos on the HD and a mere DTS-HD 5.1 mix on the Blu-ray continues. It’s ridiculous. Dark Tower isn’t an audio showcase, but it’s impossible to ignore some loss on the Blu-ray.

The height of either mix is in the lows, irony notwithstanding. Six-shooters fire off with intense LFE. Shots at the tower take on the entire room and win against anything loose hanging around. Smaller moments (Walter using a power) add a nice thrust of energy to the track. Earthquakes in the first act hit hard.

Surround use, however, lacks the same impact. Generally, the mix uses the rears for debris fields. It’s effective, certainly when in the middle of a battle scene, but leaves the rest of Dark Tower sounding restrained. There’s a lack of blockbuster class to this work, but it’s sufficient enough.

A blooper reel should include the entire movie, but the three minutes of on-set errors will have to do. Four deleted/extended scenes run six minutes. Last Time Around prominently features Stephen King as he discusses his work for nine minutes (along with filmmakers in other interviews). Stephen King: Inspirations is an oddity since it copies the latter interview with a different green screen background.

A bit on the action choreography (8:29) and a featurette on McConaughey (8:22) follow. Production design earns its own bonus via The World Has Moved On (7:02). Three short promo clips provide next to no value in A Look Through the Keyhole.

Stephen King’s seven-part novel series The Dark Tower is adapted into this dull, simple tale of good versus evil and misses critical context.

The 15 unaltered images below represent the Blu-ray. For an additional 12 Dark Tower screenshots, early access to all screens (plus the 8,000+ already in our library), exclusive UHD reviews, and more, support us on Patreon.