Does Whatever a High Schooler Can

Peter Parker battles high school awkwardness as much as he does his nemesis Vulture in Homecoming. The key is awkwardness – not gloom, not angst. Parker, and by obvious extension Spider-Man, stumbles through teenage life. Literally, too. Chasing down a weapons dealer, Parker crashes through pieces of middle America. He slams through a shed, ruins garbage pick-up day, crushes a picket fence, and outdoor décor will never be the same.

Homecoming is like a flashback to 2008, back before Robert Downey Jr.’s Iron Man knew what he was doing. That’s the stuff modern teens grew up on. Homecoming teases the nostalgia to come, if it’s not already here (can something be nostalgic if it’s not done yet?), and with a character their age. As such, Parker is the relatable science geek. He lacks social skills. His confidence isn’t quite there. This Spider-Man is one for the generation groomed on Marvel, primed for Saturday night Lego binges.

It’s an apropos title, Homecoming. Marvel “won” the character back for this Cinematic Universe outing, this after Sony themselves strangled Spidey in their dual Amazing Spider-Man junkers. Under the guiding hand of Marvel, the moodiness is gone. Spider-Man is back to Tobey Maguire’s goofiness for still more cinematic nostalgia.

This isn’t all children at play. There’s a generational duel at work. That feeds the central conflict. Michael Keaton somewhat ironically takes flight as a birdman, more of middle America seeping into the ideals of Homecoming. Once a self-starting hard worker, Keaton’s livelihood disappears. Big money came in and cleared out the little guy, an empathetic scenario. Without options, he takes up the Breaking Bad method, minus the meth. Keaton sells illicit alien weapons. Much safer.

The paring of Spider-Man and Vulture is a natural, antagonistic oil-and-water pair. Parker doesn’t understand the pressure to support a family; he’s too young and subsists on moral lessons from his aunt. Keaton though, he has bigger needs plus a sense of masculinity to maintain. The bread winner, the successful businessman. It’s a facade, but a convincing one.

In a greater viewpoint, it’s the safe margin for Spider-Man’s entry to Marvel’s ever continuing saga. This barely-out-of-puberty teenager needs to bump up against billionaires and American icons, decades older. Making Parker stare down maturity, even fight against it, gives him a chance to live out those last days of childhood, unorthodox as his experience is. Spider-Man fits now – said as if Spider-Man would ever NOT fit into something under Marvel’s logo. This is home, and a smart start. 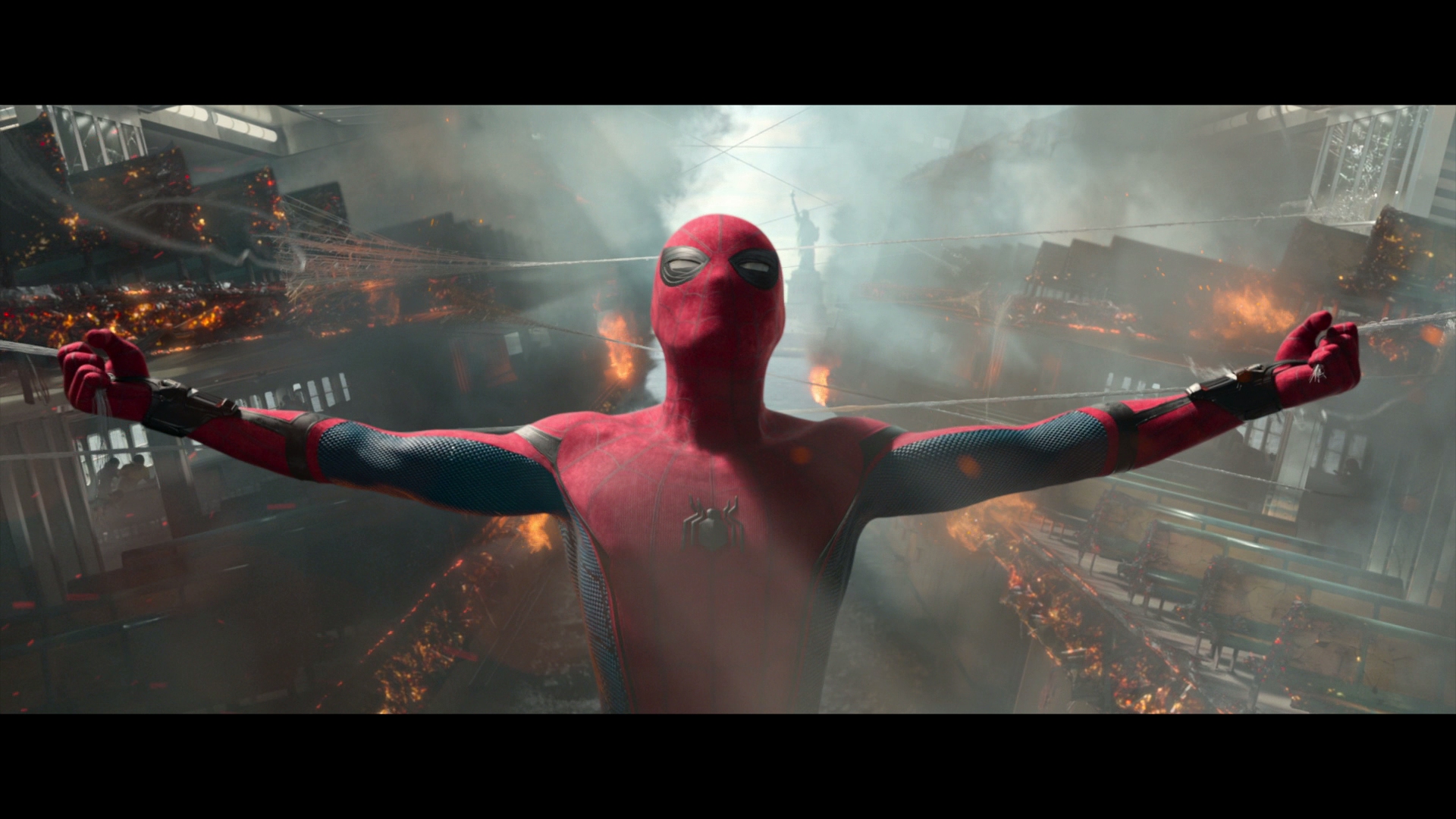 Not a stunner, but an adequate presentation regardless. The energy in Homecoming’s visuals dwindles from the outset. A lot of time is spent casting the comedy in blue-ish hues. Outside of the ferry rescue, an exterior, daylit action scene, Homecoming is oddly dour for the lightness in tone.

Primaries still come to play. It’s Spider-Man; the mix of red and blue is substantial. Well rendered flesh tones read nicely. A heated sunset, with Spider-Man perched on his apartment landing, is a dazzler. Double that with HDR effects giving the sun a blazing quality.

Cinematography (and a 2K source) veers on the softer side too. Detail isn’t chiseled out in close-ups. That aside, picking up texture on Spider-Man’s suit or allowing New York to shine in aerials come on this disc’s resume.

Even if the level of contrast diminishes by way of the color timing, there’s plenty of depth to soak in. Black levels render gorgeously, maintaining shadow details and hiding any artifacts. Homecoming is quite clean, aside from Parker’s first entrance into Vulture’s home. Watch the kitchen drawers on the left of the frame for some thick noise. That’s a rare misstep on this disc.

At the source, the cinematography brings a softer touch. Finer details have a tendency to slip away. Color density is lost too, a touch pale and pinkish when it comes to flesh tones and lesser primaries.

A wallop of an Atmos mix is easily one of 2017’s best tracks. This one is a constant over achiever. School hallways fill with ambient chatter. New York streets come alive. At one point, Parker sheds his clothes, each bit of cloth landing in a rear channel as he tosses them. That’s dedication.

A second sky-favoring character in Vulture means even more chances to excite, tracking between channels with precision and effortless movement. Any flight scene is flawless, even with the wings disconnected. Spider-Man dodges attacks as the wingsuit takes off by itself, and those wings pan between speakers as they approach or fly off.

LFE is sourced from the alien weapon tech. Each blast is thunderous, even when fired at a distance. Just charging them for an attack is enough to rev the subwoofer. Any major action scene, from the ferry to the finale’s plane crash, proves wonderfully bold. Dynamic range spares nothing.

What pitiful extras. A pop-up trivia track is right out of 2008, in case the nostalgia wasn’t enough. Ten deleted/extended scenes have a few comedic gems. Likewise, so does a gag reel. Rapping with Cap contains the full series of PSAs seen briefly in the main film. Pros-and-Cons of Spider-Man is last feature worth watching as co-stars Tom Holland and Jacob Batalon discuss the character for a few minutes.

Everything else won’t move beyond EPK fluff. The six featurettes quickly fall into a repetitive pattern, and rarely with any concrete info. It’s not worth sitting through these for the limited meat on their bones.

Peter Parker returns to the screen (again) but this time under guidance from the studio that created Spider-Man. It’s an overdue reunion.

The 15 unaltered images below represent the Blu-ray. For an additional 18 Spider-Man: Homecoming screenshots, early access to all screens (plus the 7,000+ already in our library), exclusive UHD reviews, and more, support us on Patreon.