Dee Wallace Returns To Horror In This Christmas Slasher

A dysfunctional family’s Christmas reunion is ruined when a dark secret from their past becomes an all-out slasher. What happens when you construct a slasher around an abortion clinic bombing by pro-life fanatics? You get Australian filmmaker Craig Anderson’s Red Christmas.

The polarizing horror film stars veteran horror actress Dee Wallace (Cujo, The Howling) in a comeback role of sorts. The character-driven film recklessly tackles religion and abortion within the parameters of the standard slasher formula using a mixture of bloody action and black comedy. Red Christmas bites off more than it can chew on its themes with an uneven tone and heavy-handed approach.

Virtually anyone that lived through the 1980s is familiar with actress Dee Wallace. She had prominent roles in The Hills Have Eyes, The Howling, E.T., Cujo and Critters. She stars as the stressed-out mother of a squabbling extended family in Red Christmas, gathered together in a remote Outback estate on Christmas Eve. Dee Wallace headlines as Diane, a matriarch presiding over the gathering of her adult children on Christmas Day before she sells their family home for good.

Family drama quickly gives way to terror when a robed stranger appears at the door that throws the entire gathering into chaos and confusion. When the deformed young man named Cletus appears at Diane’s door, things soon change from petty insults to bloody violence as Diane attempts to protect her family from the intruder.

The blood-soaked slasher is strangely enough a quirky character-driven film for at least its quieter first half. We get introduced to Diane’s adult children and Uncle Joe. She also has a son with Down Syndrome named Gerry who becomes important to the story. The conflicts mostly stem between the two older sisters, Suzy and Ginny. Suzy is the only seriously religious member of the family and married to a minister. There is some jealousy brewing as Suzy can’t conceive in her marriage while Ginny is on the verge of delivering her first baby. Red Christmas has no problem taking a swipe at Suzy and her in-the-closet husband as hypocritical Christian stereotypes.

The flimsy slasher narrative is propped up by Anderson’s stylish direction, especially in the back half when Cletus runs amok over the family’s household. The themes it tackles on abortion and religion are going to be uncomfortable for some viewers, re-working the standard slasher formula. The characters are fairly interesting with their own distinctive personalities, from Diane to her children. The most likable is Gerry, her son with Down syndrome.

There are some entertaining moments in Craig Anderson’s Red Christmas and it’s nice seeing Dee Wallace again in a horror film. However, not everything works as the film’s tone unevenly handles its contentious subjects. It’s a horror film with a message of some sort, but one that gets muddled as Cletus turns into another garden-variety nutcase. 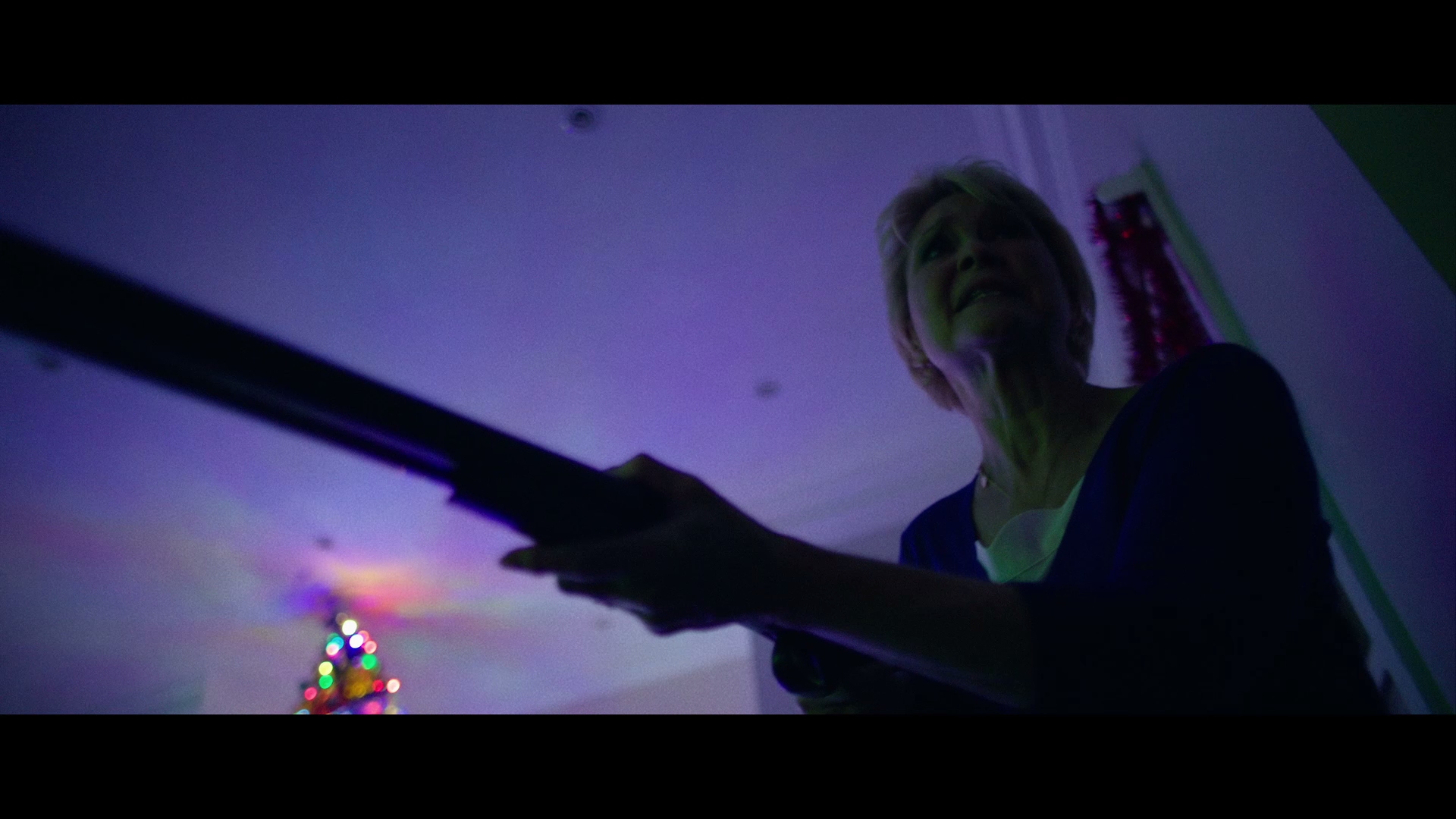 Artsploitation Films provides a steady, technically competent Blu-ray presentation for Red Christmas. The 81-minute main feature is encoded in a consistent AVC encode that handles the grittier textures and noise without serious problems.

This is decent but unpolished 1080P video. A hint of chroma noise is evident. A series of red and green filters give an eerie glow to later scenes set in the house, a tribute to the Christmas setting.

The low-budget horror film has a consistent contrast with average black levels. The scope presentation has fairly interesting cinematography influenced by decades of prior slashers. It lacks the detail and refinement of videophile presentations.

One thing Artsploitation Films hasn’t gotten right when it comes to Blu-ray are lossless soundtracks. Once again they release a Blu-ray with a lossy 5.1 Dolby Digital soundtrack at 448 kbps. This is an adequate audio presentation with mostly intelligible dialogue. Like most low-budget productions, Red Christmas has a front-heavy soundstage with poor imaging. It doesn’t have the pinpoint, crystal-clear audio design of more elaborate Hollywood movies. The 5.1 Dolby Digital audio does a serviceable job providing a coherent sonic experience.

Optional English SDH subtitles play in a yellow font that remain inside the scope video presentation at all times. A secondary 2.0 Dolby Digital soundtrack at 192 kbps is included that frankly doesn’t sound much different than the surround mix.

Artsploitation Films includes a weighty line-up of special features for the Australian film, including the participation of star Dee Wallace and writer/director Craig Anderson.

Dee Wallace Speaks (19:43 in HD) – Director Craig Anderson interviews Dee Wallace on a number of topics, from her work on other films like Cujo and The Frighteners, to how she got involved with Red Christmas.

An Interview With Gerard O’Dwyer (09:57 in HD) – Craig Anderson and Sam Campbell (the actor playing Cletus) hold a loose interview with actor Gerard O’Dwyer. O’Dwyer has Down Syndrome and plays Gerry in Red Christmas.

Deleted Scene (00:45 in HD) – A relatively forgettable scene cut from the film.

Director’s Commentary – Writer/director Craig Anderson and actor Gerard O’Dwyer give this friendly commentary on the slasher. Anderson breaks down his intentions in many of the scenes, venturing into his sources and inspirations for the material.

Dee Wallace returns to her horror roots in this contentious Australian slasher.

The unaltered images below are taken from the Blu-ray itself. For an additional doezen Red Christmas screenshots, early access to all screens (plus the 7,000+ already in our library), exclusive UHD reviews, and more, support us on Patreon.