The subtitle, Last of the Enforcers, rings true; it’s true for hockey as the sport moves toward finesse play. That means pushing away players like Ross Rhea (Liev Schreiber), bar brawlers who happen to skate. According to Goon, they take their frustrations out in hockey fight tournaments – hockey, without the hockey.

Goon’s sequel is certainly reaching. The ludicrousness of these skating brawls (“Banned in 11 States!”) puts a damper on the otherwise old-fashioned, rough-and-tumble ice play. That’s Goon at its best, following a scrappy minor league squad pushing for a playoff birth. In-between games, star player Doug Glatt (Sean William Scott) is pushing for a birth of his own, that of his daughter.

It’s an interesting mix. Glatt slows down with age. His shoulder gives him problems now. Glatt’s focus on his now wife (Alison Pill) turns him into an insurance salesman – a poor one – who moonlights as a hockey brawler.

If there’s a theme here, it’s about learning when the time is right to quit. Goon represents all hockey, much as it does Glatt’s character. Despite the raucous, salacious tone, Goon doesn’t ignore the reality of concussions or of age. It almost looks down on the sport as exploitative, putting players into inescapable roles, one they need to keep up or be discarded. This, despite hockey moving beyond the idea of enforcers.

It’s a family story, just not for families

Between a torrent of f-bombs is Goon’s heart. It’s a family story, just not for families. Don’t bring the kids. The script is smart enough to attack the eye-rolling “sports wife” cliché, even if Goon does employ it. Goon needs some form of antagonistic come down before building to the finale.

Most surprising is Goon’s attraction to a genuine character story. There’s empathy for the Ross Rhea’s of the world. Hockey turned them to scraps; people only pay to watch them fight in questionable tournaments. The same for Glatt too. He’s chewed up and stepped on, merely for doing what he loves.

With Rhea taking on a hero’s role, it’s Ander Kane (Wyatt Russell) becoming an antagonist. He doesn’t want any of this, trying to punch his way through the league in the hunt for his father’s affection. It’s a clever twist – Kane, like the other pugilist players, has sympathetic reasons for his play style.

Note this is a sports movie. It’s clear who will win. Two montages kill some time. The rogues gallery of player personalities won’t surprise seasoned cinema sports fans either. Goon found a niche though, not recalling the iconic roughhousing of Slapshot, rather doing something with its contemporary setting. It’s about hockey, how the sport’s undergoing a metamorphosis, and those its leaving behind. It’s bittersweet. Then, there’s a dick joke and it’s not. 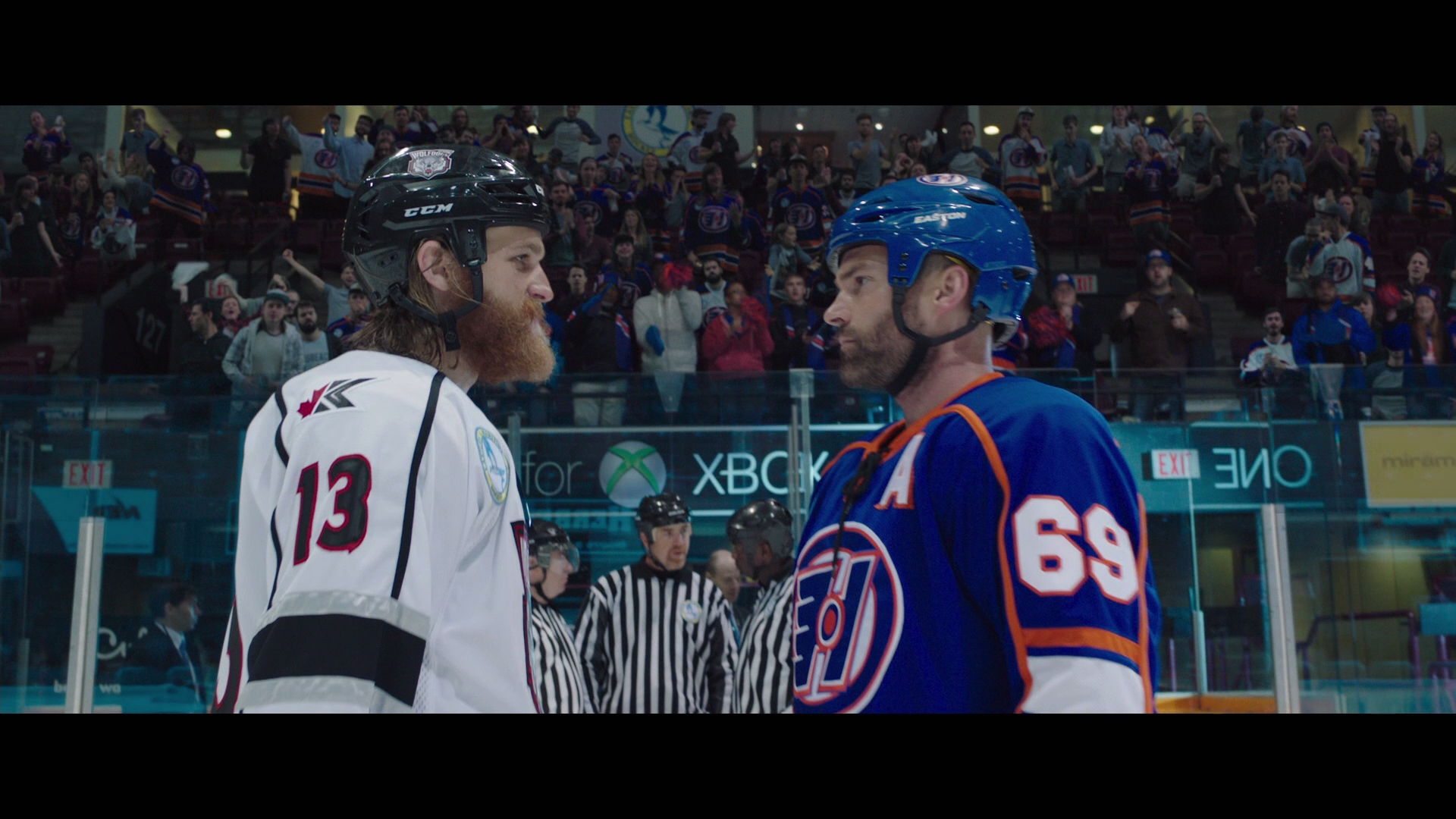 On Blu-ray, this is a strangely pale film. There’s hardly any black to go around. It’s as if someone washed a fog over the imagery in the post. Everything takes a hit, nothing more so than depth however.

While often littered with bright team logos, the energy is lost from graying imagery. Flattened flesh tones and lessened primaries lose their zest. Even the blood (and blood is frequent) appears weak.

Thankfully, Goon offers up some fine detail. Close-ups produce high resolution and strong results. Stock shots of exteriors/stadiums aside, there’s a firmness to the images. Note scenes of a recurring sports show is purposefully degraded. Fuzzy edge enhancement and visible compression give these scenes a broadcast look.

Somewhat consistent if mild noise stretches through the entire movie. Impact on detail is nill. Some high points of contrast offer a safe spot, free from digital artifacts. The encode from Momentum Pictures isn’t offering the highest bitrate, but it’s enough to get Goon to a finish.

With plenty of on-ice hockey, Goon’s DTS-HD mix whips around kicking skates and various other stadium sounds. An active crowd fills the soundfield, and stereos nicely fill in the front soundstage. Dialog takes off from the center. Locker room chatter pans into the front soundstage and when playing, team calls shift into the stereos.

Want the best stuff though? Wait until the fights. Dollops of blood fall from the punches, landing in the rear channels. That’s hockey.

Director Jay Baruchel sits down with co-writer Jesse Chabot for a commentary. A 15-minute making of isn’t too exciting; most of it is filled with actors explaining their characters.

Signaling the twilight era of the brawler archetype, Goon’s sequel brings in a new era of hockey with one more blast of violence.

The 15 unaltered images below represent the Blu-ray. For an additional 11 Goon: Last of the Enforcers screenshots, early access to all screens (plus the 7,000+ already in our library), exclusive UHD reviews, and more, support us on Patreon.