Possibly the most famous loch in all of Europe, Loch Ness in Scotland has become world famous for its own Loch Ness Monster. Many over the centuries have imagined a large, dinosaur-like creature swimming in the murky waters of Loch Ness. Its haunting landscape and peaceful beauty is a perfect place to set an elaborate mystery. The tourist trap becomes home to a series of murders that leave the police scrambling for answers.

Loch Ness: Series 1 is a UK murder mystery program starring Laura Fraser (Breaking Bad, The Missing) and Siobhan Finneran (Downton Abbey, Happy Valley) that explores a much more human monster than Nessie – a serial killer terrorizing the small, fictional town of Lochnafoy. The suspenseful mystery series is driven by two female detectives hunting for the unknown killer as dark secrets lurk underneath the surface of this quaint town’s locals. One character even has a connection to Nessie as a local tour guide for tourists.

The tense crime drama follows Annie Redford (Fraser), a small-town detective thrown into her first murder investigation. When a local piano teacher is found dead at the bottom of a cliff, DCI Lauren Quigley (Finneran) arrives to lead the inquiry, along with forensic psychologist Blake Albrighton (Don Gilet). At first Annie Redford clashes with these forceful outsiders to her town, making rookie mistakes. As more bodies turn up, the team starts believing a serial killer is roaming the shores of Loch Ness.

… a couple of the bigger reveals are real clunkers

As the case swells to engulf the whole town in its murder mystery, Annie becomes immersed in the investigation. She quickly assumes a critical role in the investigation with her knowledge of the local area and its people. Annie’s personal connections to many of the suspects start becoming problematic for Quigley and Albrighton. The strain of the investigation on Annie unintentionally pushes away her husband Alan (Gray O’Brien) and teenage daughter Evie (Shona McHugh). A prank played by Evie unexpectedly draws her friends into the investigation, leading to deadly consequences. Loch Ness is not shy about gruesome deaths. Several different characters will end up dead before the killer is found.

Like many lesser procedural crime mysteries, the densely plotted Loch Ness has a number of red herrings and unbelievable twists. The narrative is definitely told from a female perspective as Annie comes to grips with her growing skills as an investigator while balancing family life. Some obvious suspects are too easy to dismiss as the killer right from the beginning. The initial mysteries play out fairly smoothly in the episodic format of Loch Ness. Each episode ends with its own little twist on the bigger mystery of the serial killer. Problems start cropping up in its second half, as a couple of the bigger reveals are real clunkers.

Also known as The Loch in some markets, Loch Ness: Series 1 is a beautifully filmed UK murder procedural strong on its lead female characters but uneven in its mystery storytelling. The show doesn’t break any new ground but delivers satisfying drama with sharply drawn characters. 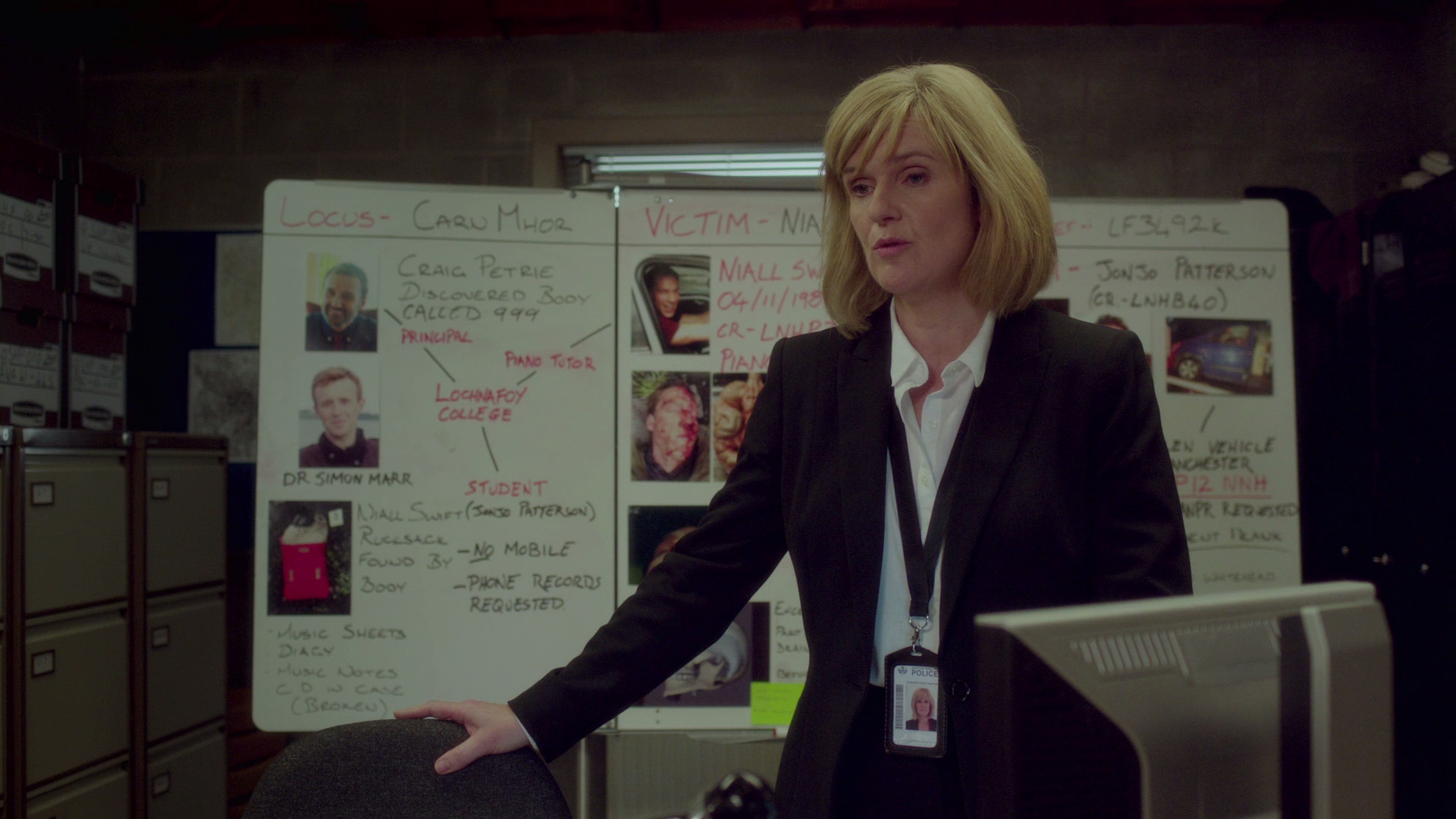 The haunting beauty of Loch Ness and its surrounding landscapes are vividly brought to life in 1080P video on this BD set. Shot on location in Scotland, the digitally-shot production has superb definition and clarity. All six episodes of the mini-series (Acorn TV calls this Series 1 but a second season is no sure thing), each running over forty minutes, are split evenly between two BD-50s.

The 1080P video is encoded in AVC at decent compression parameters. Some minor banding slips into the picture but the encode is largely pristine, transparently rendering the native digital production. In all respects this is a flawless digital transfer that exudes crystal-clear detail and razor-sharp imagery.

The lush cinematography for Loch Ness takes full advantage of its 1.78:1 frame, serving up a cooler temperature palette that favors blue and green. The dramatic landscapes of Loch Ness and its foreboding water are the perfect backdrop of a messy murder investigation with no foreseeable outcome.

While the twist-filled mystery is sometimes lacking in drama and tension, the impressive visuals make it worth a viewing in Blu-ray quality. Consider watching Loch Ness as a cheaper way of visiting the picturesque tourist attraction in person.

Loch Ness: Series 1 has a 2.0 DTS-HD MA soundtrack. The UK murder mystery drama has clean, intelligible dialogue in a fairly restrained stereo mix. There is good separation in the stereo field and solid imaging, but this is not an active mix. The dynamic range offers a relatively nice low-end with smooth, detailed highs. British shows simply don’t compare in aggressive audio design to American productions.

RLJ Entertainment (once known as Image Entertainment) and ITV Studios load this two-disc set with brief cast interviews and a few behind-the-scenes featurettes. They are fairly typical for UK television. These interviews really don’t add any revelatory information or insight beyond the most surface analysis of their characters.

A glossy slipcover is available like on most Blu-ray releases from Acorn TV.

The Making Of Loch Ness (06:47 in HD) – A cursory glimpse behind the scenes with a variety of crew and cast members offering their thoughts on the production. The difficulties of filming near Loch Ness are detailed.

Acorn TV Trailer (00:30 in HD) – This trailer plays before the main menu on disc one.

Trailers (02:02 in HD) – The trailers for The Level and Deep Water also play before the main menu on disc one.

Loch Ness: Plesiosaur Prank (03:07 in HD) – The young actors involved in the Loch Ness Monster hoax scene give their thoughts on this critical moment in the series as we get a behind-the-scenes look at the creation of the plesiosaur prop from episode 1.

The unaltered images below are directly from the Blu-ray. For an additional 12 screenshots from Loch Ness, early access to all screens (plus the 7,000+ already in our library), exclusive UHD reviews, and more, support us on Patreon.