One Chucky Too Many

The issue with Child’s Play – or whatever variant on the “of Chucky” convention producers come up with – is the series’ identity crisis. Child’s Play pandered to the consumerism behind the Cabbage Patch furor, fused it with the marketable slasher, and out came a clever stitching of social satire/demonic monster flick. The sequels almost kept that going.

Child’s Play is none of those things now. The series once caught on and parodied itself. Bride of Chucky did anyway. That was hilarious. With the last two, Cult of Chucky now and Curse of Chucky prior, it’s a franchise seeking a purposeful mate.

Cult of Chucky’s peak is Alex Vincent. He returns as 30-something Andy Barclay, the child protagonist of the ‘88 original. In the opening, it’s a clever sequel. Barclay tries to have an adult life. He’s on a date. Chucky comes up in the conversation, and the date is over. If the satire of Child’s Play comes back, here’s the avenue – Vincent, unable to escape his role in an iconic horror film, lashes out. He tortures a ruined head of Chucky for fun on Friday nights, literally burning the head that typecast him as a child actor. That’s smartly self-aware, even with a literal hand.

But, Andy doesn’t factor back in until the ending. Cult of Chucky returns focus to Nica (Fiona Douriff), protagonist of Curse of Chucky. Ruled insane after the events prior, Nica was committed to an insane asylum. It’s one those movie asylums too. Nica is first introduced undergoing shock therapy more conducive to 1930s cinema. White walls surround her. Schizophrenics walk freely around the halls, jittery and unhinged. It’s an insulting, outmoded depiction of mental health, inexcusable even in a low-grade outing starring a killer ‘80s prop.

For inexplicable reasons, the hospital’s doctor brings in a Good Guy doll. (It’s in remarkable condition for being 30-years old.) People start dying. Nica stares on, knowing what caused those deaths. Chucky spouts one-liners while the camera catches his best work.

Here’s the kicker: Chucky, or rather his evil possessor Charles Lee Ray, can now inhabit anything (he found the spell on the internet, you see). An open-ended twist to the lore, or so it seems – then he just haunts two more Good Guy dolls. Of all the things to possess, a dwarf children’s toy seems awfully dull. Therein lies the fan service. Barclay is fan service too, relegated to a small cameo along with Jennifer Tilly. Three Chuckys, one Andy, one Tilly; that’s Curse of Chucky summarized.

It’s odd when even the home studio seems exhausted by their property. Cult of Chucky withers under a lackluster budget, and the direct-to-video trap is inescapable. A couple of kills earn memorable status. Director Don Mancini (also writer of all seven Child’s Play films) comes up with a few nifty shots of Chucky too, but the rest is on fumes. Cult of Chucky only follows the road, drifting without motivation. 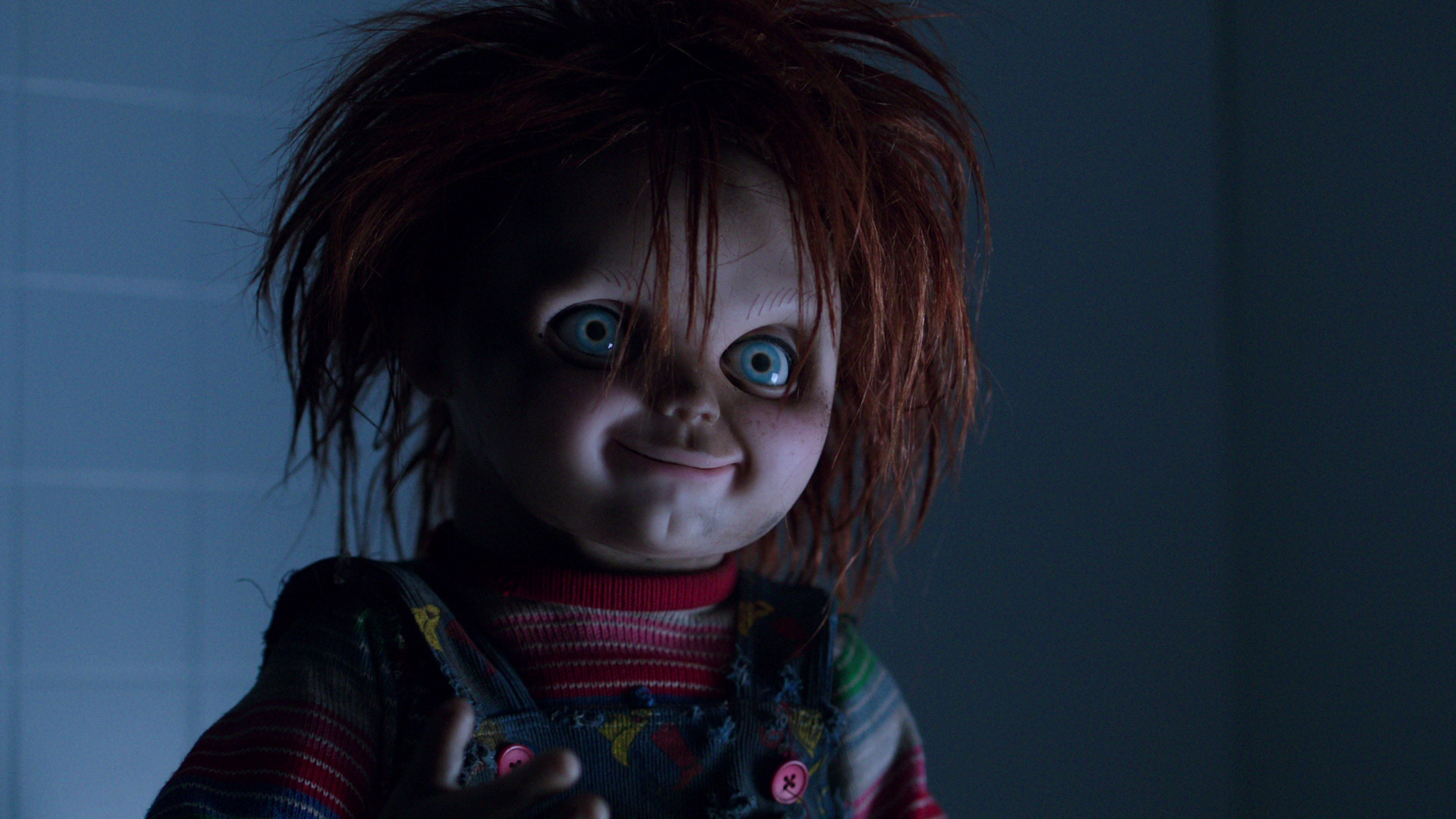 Rather simple cinematography means frequent close-ups. The digital lens picks up gobs of fine detail. What comes through is even the smallest information, down to the plastic texture on Chucky himself/itself. It’s striking in fidelity if not always clarity. Digital noise is a problem, although rarely severe. Mostly, it’s low-light noise. Sadly, smoothing effects on Jennifer Tilly cannot be missed.

Pale, white color saps the energy from the visuals, certainly with a point. Isolation in the asylum is accentuated by the lack of pop. It’s Chucky’s brightly colored clothing that breaks out. The rainbow-colored shirt stands out against the all-white backdrops.

Despite all of the darkened rooms, contrast stays high. Black levels do their job too. Depth is quite strong throughout.

Outside of some thunder and music stings, Cult of Chucky’s DTS-HD track barely uses the available channels. A bit of pitter-patter as Chucky runs around a room is a rare occurrence despite opportunity elsewhere. Voices stay in the center, and ambiance is rare.

Thrumming orchestration does involve the LFE a tad, albeit minor. Dynamic range is on show during the kills as a startling effect. That’s fine, just dull.

Writer/director Don Mancini and puppeteer Tony Gardner pair up for a commentary, and Mancini continues over three deleted scenes. The first featurette, Inside the Insanity, brings an EPK feel to its seven minute runtime. Good Guy Gone Bad is a better one, focused on the complex animatronic and puppet work.

What’s a shame is The Dollhouse only runs seven minutes. It’s a look inside the family-like atmosphere formed from making the Child’s Play films. There’s a fine documentary here potentially, if expanded.

The Child’s Play series is so far removed from its origin as a consumer satire, it’s a wonder what Cult of Chucky’s purpose is.

The 15 unaltered images below represent the Blu-ray. For an additional 16 Cult of Chucky screenshots, early access to all screens (plus the 7,000+ already in our library), exclusive UHD reviews, and more, support us on Patreon.