Please be the last

The best thing said for Transformers: The Last Knight is Anthony Hopkins’ role. The great Oscar-winning Anthony Hopkins, in among a bevy of popcorn chewing explosions and a giant robot melee. It’s funny in concept, let alone his apparent on-screen disinterest toward the material.

But everything else in this thudding mess just reiterates what is already known about Transformers movies. They don’t learn. After being roundly chastised for racist ‘bots in Revenge of the Fallen, Michael Bay (or the writers or the producers or the studio) slap together the “gangsta” sidekick Mowhawk. Not a single person of color wrote Mowhak’s dialog, that much is clear. Also in is Jerrod Carmichael, the lone face of any color in the main cast, who of course lived in a ghetto. He states as such.

There’s a shapely body on display again, this time played by Laura Haddock. She’s a history professor and plays polo. Oh, and rich. She’s so, so rich. She gets the hots for Mark Wahlberg, who returns to this franchise in the lead role. He has a six-pack. Moner stares and gawks lest any women in this series break out and do anything else than fawn over a leading man.

Merlin is played by Stanley Tucci, in case anyone wondered if Last Knight or any Transformers film contained an ounce of sincerity

After Dark of the Moon swung so distinctly toward an anti-government stance, it’s mostly back in Last Knight. Government overreach and fear led to an expansion of Homeland Security. They have their own Tie Fighter-like drones and bipedal robots. No one in the Transformers universe ever peeked at RoboCop to see why this is a bad idea.

There’s the TRF too, a replica of the real world ICE, but instead of breaking up immigrant families, TRF hunts down any remaining Transformers. They’re high-end Marines, hoo-rah and red, white, and blue, plus all that patriotism that entails. Wahlberg though, he’s a defender. “All they want is a home!” he shouts in a passionate defense of his robotic allies. Last Knight isn’t entirely leaning toward one political side, and mostly ends up confused.

By the end, everyone chips in and pulls together to defend Earth from another invasive planet: Cybertron is crashing into Stonehenge. That’s prime for catastrophe and spectacle. Some people chastise DC’s comic book films as being hideously violent and crushing thousands of innocents during their battles. Autobots and Decepticons lifted entire cities with energy beams and now brought their home – literally their entire home – onto ours. That’s the Michael Bay way. Beat that DC.

In the beginning and middle of all of this comes the Arthurian legend. Merlin is played by Stanley Tucci, in case anyone wondered if Last Knight or any Transformers film contained an ounce of sincerity. Somehow, Cybertonians lived among us since year 46 and also somehow, not a single scientist or civilian picked up on this until 2007. The Transformers hid well. Transformers movies never insinuate a required intelligence, but this is beyond the point of insulting. It sure is loud though, and colorful too. 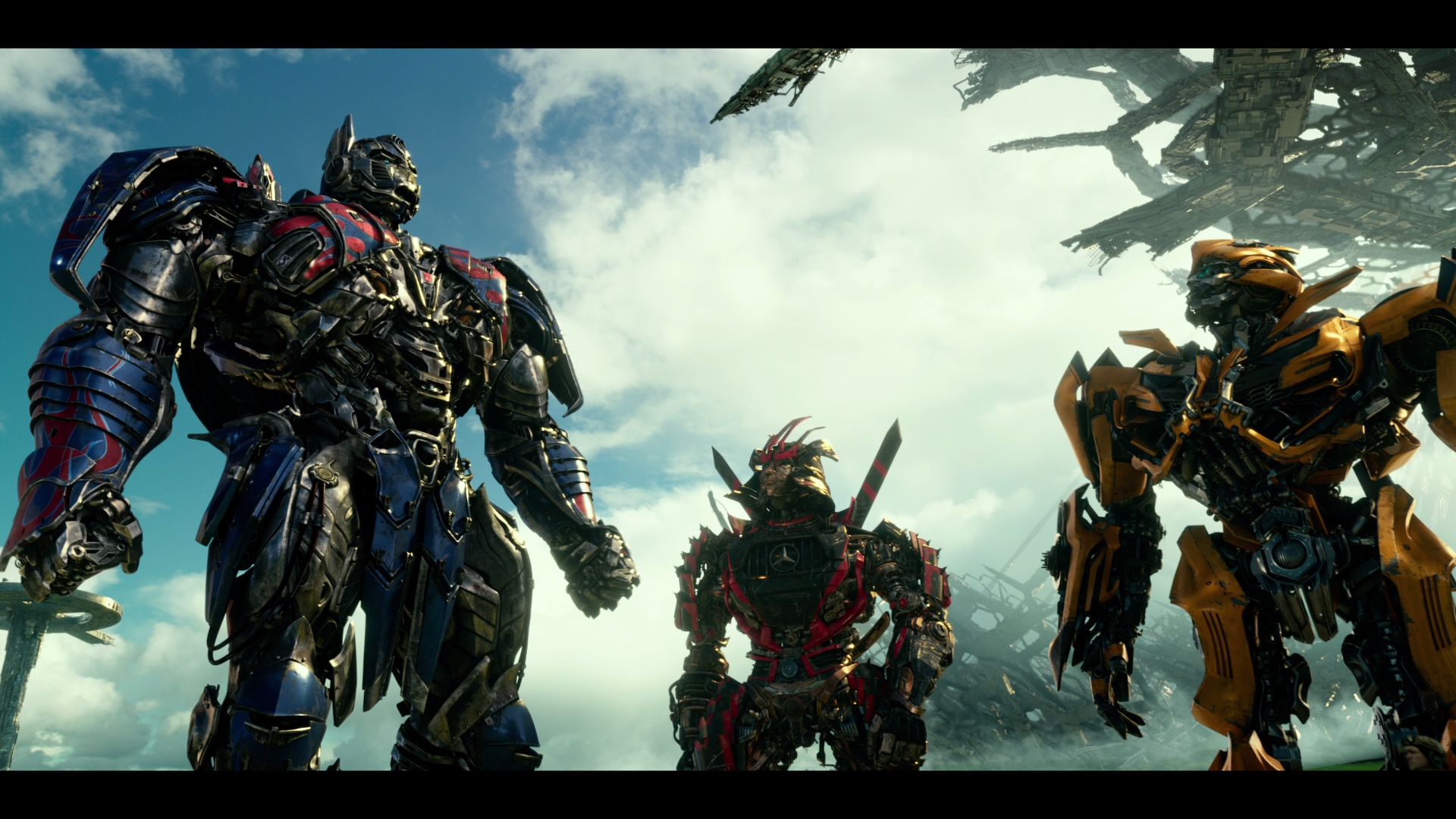 Michael Bay’s style is made for this format. Using ridiculous levels of heavy contrast and intense light sources, Last Knight is a total UHD show-off. Striking contrast adds superb depth, bulking up the imagery with crazy shadow detail and gorgeous highlights. Wahlberg, speaking to his daughter over the phone, is silhouetted by a sunset in the background. It’s still possible to make out details.

Although heavy on the color grading and especially warmth, plenty of saturation pops from the rapidly changing aspect ratio. (On that side note, Last Knight switches between three ratios with such frequency, it’s a wonder why it doesn’t just stick with one.) Reds and blues stream in, and sunsets dazzle with intense oranges. Brilliant hues cover this film, even during the densely blue opening scenes. The greenery of the location still shows through.

Shot with a variety of formats and mastered in 2K, Last Knight looks greater than an upscale. The detail is absurd. Actors bring out facial definition. Visual effects of the Transformers show every gear, metal shard, and other intricate detail. At a distance, all of this fidelity is maintained, up to an Earth-sized scale. Cybertron comes together from a bevy of small pieces and textural qualities.

All of this is accentuated by the shimmering HDR, not only bursting as needed with the explosions, but highlights too. It’s as if viewing this style of effects for the first time. Lighting sources, whether eyes, sparks, or electrical jolts, carry a stunning quality.

Still gorgeous, Last Knight is a reference disc for video on Blu-ray. Spilling out Bay’s heavy contrast, the disc accentuates depth even if this creates an occasional bit of crush. This is in tandem with pleasing saturation, accentuating the red and blues of Optimus Prime.

Paramount’s super bitrate encode doesn’t have any problems rendering the footage. Free of aliasing or noise, the clarity is immense. Fidelity stays high, especially on the visual effects that come packed with small details.

Both the UHD and Blu-ray offer Dolby Atmos as the core audio output. It’s stellar. It can be argued this is the weakest of the Transformers audio mixes, although that still puts Last Knight somewhere in the top five or six of either format. While separation is lovely, this doesn’t have the potent aggression of say, Revenge of the Fallen’s forest battle. Things sound a bit leaner than before.

Still, the wealth of debris fields, sparks, and clashing metal combine to create a room-sweeping mix. Ambiance inside a submarine or the ammunition from a catapult streaks around the soundfield without issue. The accuracy is, of course, flawless. By the time Last Knight reaches the climax at Stonehenge, the mix solidifies itself as a near masterpiece. The chaos fires in a full 360 degree soundfield.

Regardless of some earlier hesitation, the LFE is still best-in-class. Every explosion, up to an entire planet colliding with our own, wallops the low-end. Epic levels of rumble shake the room, matching the intended visual scale.

A bonus Blu-ray houses the extras. It’s a decent set if lacking depth. Merging Mythologies opens things, spending 20-minutes on the brainstorming sessions with the writing team and how they arrived at the King Arthur story. A bit of military posturing comes out in Climbing the Ranks, giving credit to the Seals team for nine-minutes.

The Royal Treatment digs into the production mess caused in England, focusing on this location shoot for 27-minutes. Characters and their design comes in via 14-minutes of Motors and Magic. Cybertron earns credit through Alien Landscape (7:16) and a montage of set footage is compiled to create One More Giant Effin’ Movie, an enjoyable seven minutes of bleeped language.

Paramount keeps making Transformers movies but like The Last Knight, it’s getting harder to care about Michael Bay’s output.

The 15 unaltered images below represent the Blu-ray. For an additional 22 Transformers: The Last Knight screenshots, early access to all screens (plus the 7,000+ already in our library), exclusive UHD reviews, and more, support us on Patreon.