Stop and Be Friendly

Steven Spielberg was born in 1946, near the beginning of UFO mania and the sci-fi films that relished the idea. No wonder Spielberg’s Close Encounters of the Third Kind holds a belief and child-like gaze toward the phenomenon. While worrying parents who understood the uneasiness of a post-WWII world grew weary of sky-born visitors, kids were fed “Mars Attacks” cards and playful matinee cinema. Aliens, along with their mode of saucer transportation, were cool.

Close Encounters exists deep in the pantheon of ‘50s sci-fi. The initial outburst of events, the entire first act, feeds from those leftovers. Spielberg’s take churns a decades worth of cinematic storytelling. Playing to his success with Jaws, a child sees the creatures raiding the kitchen; the audience does not. Spaceships stream their lights into an indistinct Muncie, Indiana home, lights too bright to make out anything. Spielberg shows not the fear in a pilot’s eyes, but the mystery as the events play out over radio to an air traffic controller.

Who sees the ships? Exactly who you think would in a judgmental ‘50s era society, kooks, loons, and societal outcasts of the period: a beguiled single mother, the drunken elderly who witnessed once bigfoot, and average citizen Roy (Richard Dreyfuss). Maybe Roy doesn’t entirely fit.

Roy holds his family close and dear, especially his children. They even help him dig up the plants in the yard as Roy melts down over a compulsion to build a monument. But Roy believes, even if his frazzled wife does not. She’s worried. So are Roy’s neighbors. He’s the village kook now, even when he’s right.

If anything prevails over Close Encounters, it’s a sense of belief – stand by what you know to be true. Partway through, even Roy doubts himself. Even he questions this new reality. Inside is a firm religious parable, although less metaphysical and more in the realm of plausible science. Plus, that overwhelming childhood mystique, a ‘50s child whose days of pew-pew ray guns and rubber alien masks suddenly mean something.

Spielberg cranked out two additional alien films after Close Encounters, E.T. five years later, War of the Worlds some two decades on. (Indiana Jones and the Kingdom of the Crystal Skull doesn’t count for anything, nor should it.) There’s a distinct progression toward violence in these extraterrestrial outings. Close Encounters is the lone pacifist film, a rarity in the genre as a whole. Even in a film with roving, overlit UFOs, the government’s predilection toward science and sense over artillery and bombings is Close Encounters least plausible action (or non-action).

By the time of E.T., paranoia grew. The middle class family fell to the hands of the government. In War of the Worlds, everyone was screwed. Close Encounters’ edifying approach to first contact revels in the chance just to communicate. There’s a celebration, partly for Roy’s success in staying true to his experience (as many in the film do not), but broader still, that chance at galaxy-spanning dialog even if it’s only sharing five notes on a Casio keyboard. 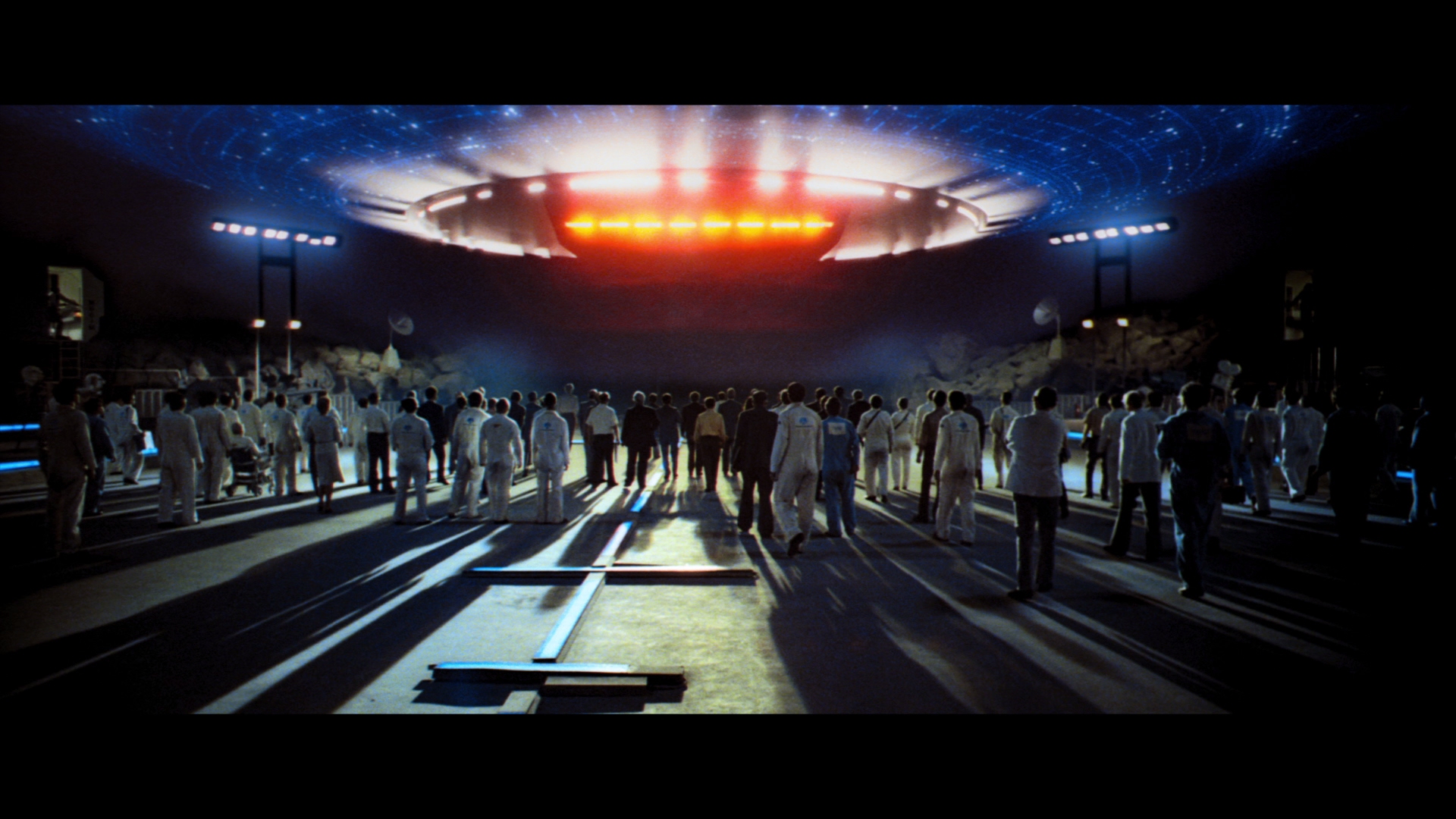 By design and the nature of ‘80s era film stock, Close Encounters carries a rough hewn appearance. Grain fluctuates, sometimes with the shadows. Luckily, where the previous Blu-ray release struggled (especially inside the interrogation room), the new 4K disc from Sony wins. Although thick, the disc manages source grain better, with breathing room as to not suffer from compression faults. Even during the opening sandstorm, grain remains pure and true to the film.

Who knew this 1977 movie would naturally gravitate toward a new home video format in 2017? It’s a movie of light. Spaceship fly-bys dazzle with their light shows, and newfound brightness gives Close Encounters spectacular pop. Even early on, shimmering backlit buttons inside the traffic control center use new video tech to add generous pizzazz. Indiana’s sun pours on energy, and when a house is surrounded by lights, there’s an unexpected showcase scene.

Not much is gained in the shadows. There’s even some crush remaining on the source. However, color certainly looks natural and vibrant. Primaries stand out, from a red shirt Dreyfuss is wearing as he reports to work, to the various lights releasing from the ships. Note the greenery too, whether the manicured grass in the neighborhood or other fields in view.

Where the disc really wins is in fidelity. Maybe this is in part because of Sony’s rather ugly initial Blu-ray. None of the post-processing elements like edge enhancement show up. It’s a pure presentation, flush with dollops of fidelity. Close-ups visibly produce better textural qualities than before, and some of the key iconic sights capture plenty of nuance. Keep an eye on the Indian desert or the model work of the alien ships. It’s incredible.

While at times a touch aggressive, the newfound depth of color provides Close Encounters with more saturation than prior. Natural flesh tones and striking primaries dot the disc, the occasional over saturation is only a small bother. Note this release darkens the image, taking some detail into the shadows. Generally speaking, it’s a minor fault.

If the Blu-ray edition suffers anywhere, it’s compression. The thick, gritty film stock tends to over power the encode, if not to any severe degree. Certainly, it’s an improvement over the previous disc.

For all of the work Sony put in to restoring the video, they put nothing into the audio. It’s the same DTS-HD mix as before, a fine 5.1 mix if leaning a little toward the right side of the soundstage. Imaging sounds more prominent on that end. Channel separation is wide, especially for a film this vintage. Even voices track from the center into the stereos. Ships pan around the soundfield with regularity.

Likewise, bass is plentiful. Alien UFOs pass by with power transferred to the low-end, and the grand response from the mothership makes full use of this audio tech.

Both the 4K UHD and Blu-ray contain the theatrical, special edition, and director’s cut. Likewise, an optional guide can point out the differences between these versions.

Like the audio, this new 40th Anniversary edition receives no attention in the extras department. Everything is the same as the Blu-ray we reviewed previously. It’s a fine slate of extras, and at least it’s complete.

Close Encounters of the Third Kind

Spielberg’s own first contact with alien cinema, Close Encounters of the Third Kind is a love letter to UFO culture and true believers.