General fan sentiment tends to say that the past two seasons of Arrow put the venerable superhero show into a rut. It saw spin-offs The Flash and DC’s Legends of Tomorrow steal some of the street-level hero’s thunder. Since Deathstroke was locked up for good on Lian Yu at the end of season two, Arrow has struggled coming up with a great nemesis for everyone’s favorite emerald archer. That all changes in season five with the introduction of new supervillain Prometheus. A visceral character purely out for Oliver’s destruction, Prometheus is the thinking man’s Deathstroke.

Don’t call it a comeback but season five is a return to form for the CW series. It pits Green Arrow and a young team of new heroes in heated battle with the deadly Prometheus all season in an arc that can only be characterized as ambitious. The show’s producers took what worked so well in season two with Deathstroke and have worked their magic once again with the mysterious Prometheus. Someone from Oliver’s dark past, Prometheus systematically strips away everything Oliver holds dear in a season-long plot. This starts with Oliver becoming mayor of Star City.

Gone from the cast is Laurel, having been killed off in season four. However, Katie Cassidy is not entirely gone from the season. She makes a couple of guest appearances. It’s a television series based on comic book superheroes, anything can go when it comes to dead characters showing up. Thea has abandoned her costumed superhero identity after last season’s problems, becoming Oliver’s political aide. Diggle is back in the military and still coping with the death of his brother, away from Star City. Felicity is still Felicity, peppering in witty banter while acting as the hacker supreme of Team Arrow.

The big additions to the cast are Star City’s line-up of new heroes. Inspired by the Green Arrow’s heroism, new characters Wild Dog, Artemis, and Ragman will eventually come to work under his tutelage and training. Returning character Curtis, the geeky tech guy introduced last season, will fully embrace becoming Mister Terrific. While these characters have all appeared before in various mediums, throw your preconceived notions about them away. Arrow’s producers have a habit of adopting a character’s name and costume, throwing out much of their backstory from other mediums to suit this series. Mister Terrific on Arrow is little more than comic relief, a far cry from his comic book roots.

Special mention has to go to actor Josh Segarra, a new cast member playing district attorney Adrian Chase. A key player involved in Oliver’s political team as mayor, Segarra is great in the role. The actor might have the best smirk on TV today, delivering priceless facial expressions when the scene calls for it. If one is wondering if Arrow wades deeply into the political arena with Oliver acting as mayor most of the season, the show mostly avoids topical political commentary outside of one “special” episode in season five about the gun debate. It is one of the season’s poorer episodes with its ham-handed, muddled presentation of a complex issue.

Including the supernatural Ragman, a super-powered character overwhelmingly stronger than most of Green Arrow’s street-level foes, constantly puts the writers into a tough spot whenever he is in battle. Ragman literally survived the nuclear bomb explosion from season four and can wield his costume of rags like a deadly weapon. He’s also one of Arrow’s first characters requiring a fair amount of CGI to pull off on a regular basis. It feels a bit outside Arrow’s comfort zone as an action and adventure series built around the very human Oliver.

It would be amiss if I didn’t mention the big “Invasion!” cross-over with fellow DC shows Supergirl, The Flash and DC’s Legends of Tomorrow. Arrow’s 100th episode crosses over in fine style as Oliver dreams a fantasy world where he never became the Green Arrow. It’s easily one of the season’s highlights, though the show pays mostly lip service to the cross-over’s plot.

Also worth a mention is the introduction of Vigilante, the mysterious anti-hero that takes justice in his own hands by shooting criminals. Vigilante is basically DC Comics’ version of the Punisher. His morality-free approach to justice and crime conflicts with Oliver’s more humane, less murderous approach.

While the new team of heroes don’t always work in season five, Prometheus may be the best villain Arrow has ever had over a season. That includes Deathstroke, who may or may not return for a cameo in this season. Prometheus is great as a villain because he knows Oliver inside and out, having spent years preparing to take Green Arrow down. Season five is excellent for long-time fans that missed the grittier approach of Arrow’s early seasons. This season mostly strips away the attempted Oliver and Felicity romance from prior seasons that some fans don’t enjoy. The best part is that Arrow keeps up the narrative momentum and suspense all season, ending in an explosive climax. 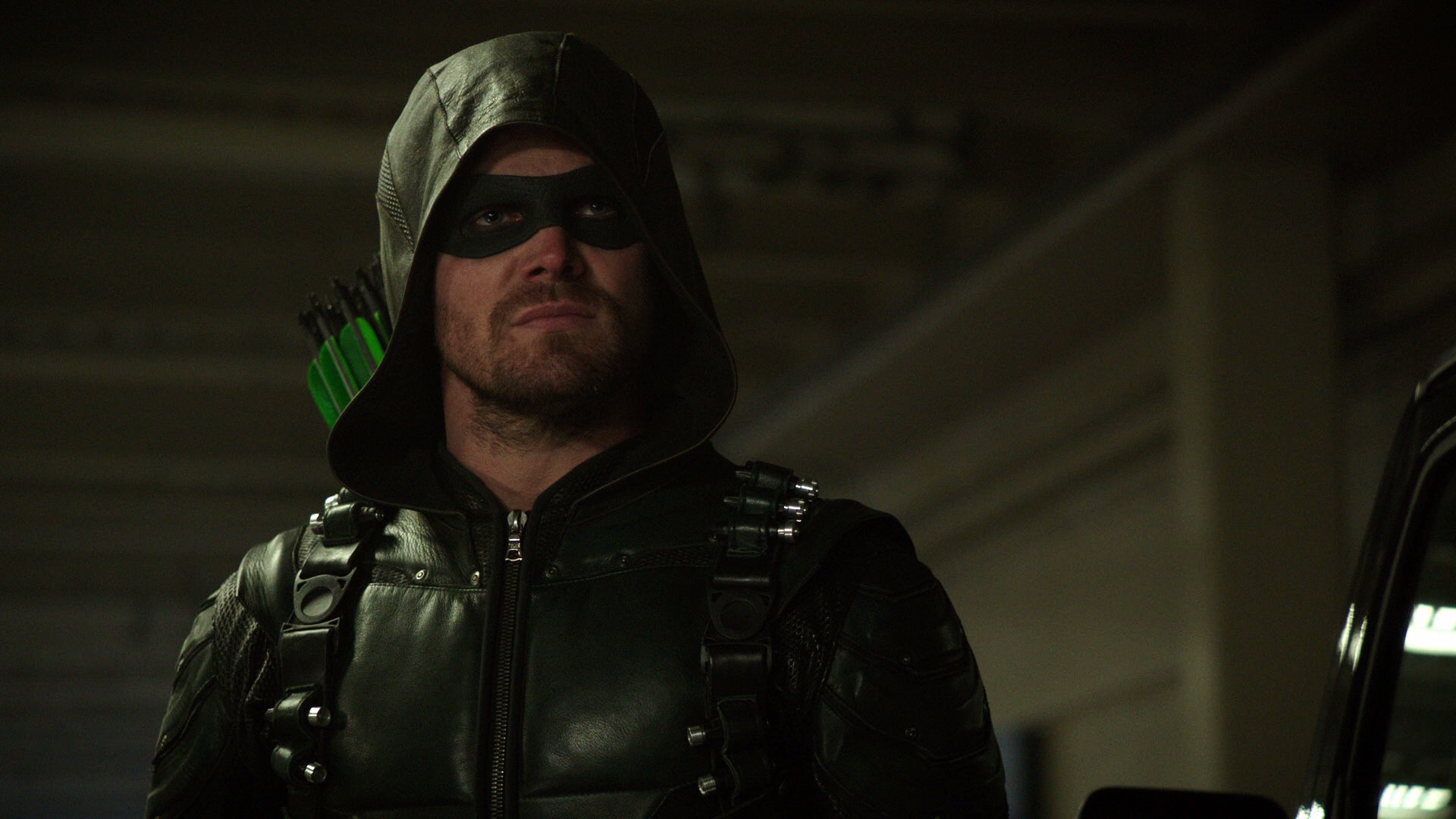 Arrow has always been a darker, grittier show than most superhero fare with its intended “street” aesthetics. Supergirl and the Flash live in bright, well-lit worlds made for HD consumption. Arrow by comparison looks more like an action thriller set at night, especially when Green Arrow and his team of heroes go on a mission in the streets of Star City. That makes it a less vivid visual experience on Blu-ray.

Arrow’s interiors usually possess fine clarity in sharp definition. That includes a strong contrast with even flesh-tones. Exteriors are often shot in much dimmer light, leading to adequate shadow delineation with hints of ISO noise and macroblocking. Arrow is less impressive-looking than its sister DC superhero shows but offers what viewers have come to expect from newer network productions. The 1080P video is presented at Arrow’s native 1.78:1 aspect ratio in a technically perfect, unfiltered transfer.

Warner Bros. includes all 23 episodes of season five on four BD-50s. Something has definitely changed in the past year as WB’s television sets have received better, more efficient AVC encodes. The video bitrates have improved, allowing the encode to better handle the darkest scenes in crisper resolution.

This Hi-Def video from Blu-ray is certainly more impressive than the HD broadcast presentation on the CW, which was loaded with artifacts. The Blu-ray set smoothly handles Arrow’s troublesome darker cinematography and provides more visible detail in close-ups.

The 5.1 DTS-HD MA soundtrack constantly immerses the listener in a structured surround mix that offers discrete action. Arrow has more LFE to it than most television shows, sprinkling bass in for explosions and the biggest fights.

The active sound design utilizes directional cues such as Green Arrow’s arrows sailing through the air and Vigilante’s gunfire circling around the listener. Clean, crisp dialogue is nicely balanced within the front soundstage. This is a new audio recording with perfect fidelity and strong dynamics.

WB includes a fairly typical line-up of special features for Arrow’s fifth season. There’s nothing revelatory in these featurettes but both cast and crew members participate in all of them, including stars Stephen Amell and Emily Bett Rickards.

The included UltraViolet digital copy gives you every episode of the season on VUDU in HDX quality. The four-disc set comes in a cardboard slipcase that should be familiar to prior owners of WB’s television sets.

WB does not include the cross-over episodes from sister shows The Flash, Legends of Tomorrow and Supergirl. So some continuity is lost if you don’t happen to own those seasons as well, but only for the big alien cross-over.

Arrow: 2016 Comic-Con Panel (27:19 in HD) – The entire cast and executive producers of Arrow talk about the upcoming fifth season in San Diego. Everyone from Stephen Amell to occasional guest star John Barrowman discuss the show and their characters’ possible future plans. Made for promotional purposes to promote the upcoming season, these panels always feel out of date if you see them after the season has aired. They stay spoiler-free and should be watched before the season in question.

Returning to the Roots of Arrow: Prometheus (15:18 in HD) – This extended featurette interviews cast and crew members on season five’s mysterious new villain and primary Big Bad, Prometheus. All season Oliver deals with his dark past as Prometheus comes from it. The writers are careful to point out that this character really doesn’t have anything to do with the infamous Prometheus that appeared in the comic books.

Gag Reel (05:23 in HD) – A series of clips edited together of actors flubbing their lines and generally making goofy faces when something goes wrong in a scene.

The New Team Arrow (09:48 in HD) – A featurette that individually addresses the new heroes that team up with Green Arrow in season five. It covers Wild Dog, Artemis, Mister Terrific and the supernatural Ragman.

Allied: The Invasion! Complex (Arrow) (12:44 in HD) – Celebrating Arrow’s 100th episode, this featurette covers the cross-over episode with Flash and Supergirl. The cast and crew discuss the dream-world scenario it paints for Oliver, one in which he never became the Green Arrow.

A great villain and new cast members revitalize Arrow in this winning fifth season. If you enjoyed Arrow’s early seasons, this is the season to jump back on.

The 15 unaltered images below represent the Blu-ray. For an additional 13 Arrow screenshots, early access to all screens (plus the 7,000+ already in our library), exclusive UHD reviews, and more, support us on Patreon.