Imagine, if rather than American pilot Steve Trevor, a German soldier crash-landed onto the shoreline of Wonder Woman’s home, Themyscria. Wonder Woman, set as a tale of peace and love through the eyes of the American perspective, would barely change. Now empathetic toward the German’s plight, she takes up arms, seeing the harm and fear caused by American soldiers. It’s only later when she sees the true horror, same as with the American side.

Wonder Woman is a stronger anti-war parable than it first looks. Most of the discussion swirls around the female power fantasy. Rightfully so. Yet stepping into a civilization divided in combat, Gal Gadot’s Wonder Woman breaks, eventually, with her American compatriots. When Trevor (Chris Pine) refuses to help civilians, Diana pauses. Then, she acts. She calls out aggression toward animals and spitefully rushes to correct wrongdoing. She’ll help anyone, no matter their country. The darker tone of Wonder Woman’s attire, dimmer red and blue, not as outright patriotic, better blends with this interpenetration of the character. She exists in a gray area and during a cruel war.

It takes a woman to solve international conflict, fitting for Wonder Woman’s strong and admirable feminist slant. A room full of male politicians won’t even let her in their meeting as they plot an armistice. Diana takes her own approach and, in doing so, accomplishes their goal. At times, Diana uses her raw strength, picking up a tank, slamming the vehicle into a wall. In other moments, this screenplay balks at anti-feminine conventions. In an effort to disguise her, Trevor puts glasses on Diana. His secretary sarcastically replies that those glasses, “suddenly make her not the most beautiful woman you’ve ever seen?” Eat it, She’s All That.

Wonder Woman acts out the superhero tentpole story, but does so with a wink

Women can do anything a man can, so says Wonder Woman. And it’s right, down to the routine and template story arcs. If Wonder Woman feels familiar, that’s because it is. Every story beat hits as it should. Each twist is obvious, and the slices of danger predictable. Screenwriting in this origin story isn’t only safe, it’s a copycat, unwilling to act daring or give Wonder Woman a distinctive crux.

In some sense, the tonality tweak is a merciful one. The moody Man of Steel, an insufferable Batman v Superman, and again, the miserable Suicide Squad suffocated under their cruelty. Whether routine or not, Wonder Woman’s sometimes brighter, even cheerier (considering the wartime scenario) fish-out-of-water narrative acts playful. It has fun. Sometimes, people even smile. It has charm without losing a striking sense of inspiring femininity. Diana breaks free from her well-trained Amazon civilization to find herself, almost a coming of age story were Diana not already so well equipped for our world. Wonder Woman acts out the superhero tentpole story, but does so with smarts and a wink. 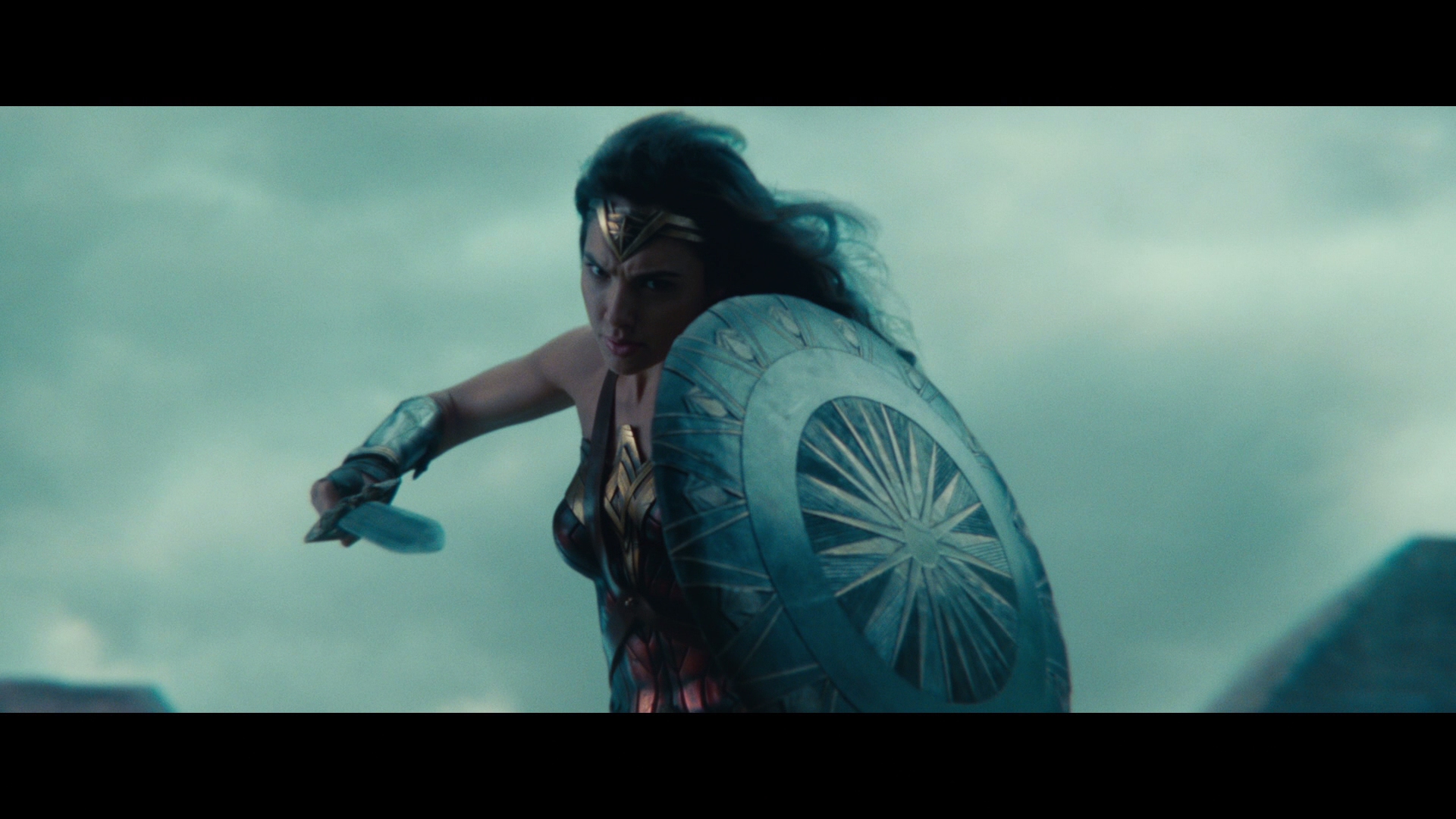 Shot primarily on film then finished at 2K, Wonder Woman’s gorgeous opening scenes in Themyscria pile on brightness, contrast, and color. Managed with strong encoding, the detail streams from the frame. Waterfalls and greenery make up the scenery, along with tightly textured chiseled marble. Of course, facial definition resolves as per the cinematography, along with obvious smoothing on certain female cast members (even Gadot at times). It’s inexcusable in a movie promoting feminine freedom.

Once outside of paradise, the color tones fall into routine blues and oranges. At times, flesh tones steer toward a ghastly, chalky orange (especially inside a bar). London exteriors lock down into an overcast gray-ish blue. The same go for the wartime battles. Orange takes on prominence from interior lighting. Like the other DC universe outings, Wonder Woman is dying for a touch of saturated color, more so considering the change in tone. A bright blue dress as Diana infiltrates a German party is the lone reprieve.

Grievances with color aside, the UHD takes advantage of the bright sparks, a glowing lasso, and multitude of explosions. This type of depth, dimension, and highlighting, when paired with pristine black levels, is what the format is meant for. In the finale battle, with electrical sparks being tossed around and fire surrounding the battlezone, the bevy of light showcases an intensity destined for UHD success.

Don’t believe there’s a difference in formats? Wonder Woman makes for a fine comparison. The appalling level of black crush throughout the Blu-ray saps the natural depth of the cinematography. As Trevor and Diana lie in their boat under a night sky, Diana’s jacket is lost in the shadows. It’s a single blob of black. Not so on UHD.

While there’s a loss of brightness and compression isn’t quite as firm (Diana’s through a village post-gas attack introduces mosquito noise), the rest of the disc gives Wonder Woman a clean HD presentation. Fidelity stays consistent and high. Shots of Themyscria retain detail into the backdrop. Facial definition strides onto the frame, cleanly resolved. Where appropriate, color saturation proves to be pleasing.

Stellar Dolby Atmos use highlights the blockbuster sound design; there’s plenty of boom to go round. When Diana first uses her wrist guards, the drop into the low-end creates necessary force. The subwoofer pairs with the scale of the imagery. This includes the bevy of explosions, from artillery shells to an entire armory going up in flames. Each blast is tight with superb rumble.

Being set during a war, the opportunity for positional use is high and matches expectations. Planes whip around the soundfield, artillery shells drop in, and bullets whip by. During the first fight, women sling arrows and German soldiers fire bullets. Add in a debris field too. The ability of this mix to manage all of this is admirable. Wonder Woman’s Atmos mix appreciates ambiance too. Listen for the subtle cues inside a train station.

A few pieces of interest fill the bonus features. An epilogue works as a deleted post-credits sequence of sorts. This sets up events in Justice League. Five extended and one alternate scene play out, and do so sans a play all option. That’s a theme in the extras.

A Director’s Vision splits into five parts, generally just short featurettes, but again, no play all. Of most interest is The Wonder Behind the Camera, focusing on the slew of women playing key roles in the production. The Trinity establishes Wonder Woman’s critical component in the DC universe. Following that, Crafting the Wonder details the style, narrative, and origins of this project.

Credit to Finding the Wonder Within, exploring the influences of the character from a multitude of perspectives, including poetry. This is the lengthiest extra too at 23-minutes. Near the end of the menu sits Warriors of Wonder Woman detailing the training regimens of the women playing the Amazons. There’s a blooper reel to send this disc home with plenty of laughs.

Gal Gadot takes the stand-alone Wonder Woman movie and makes it an enjoyable spectacle, if an ultimately familiar one with few surprises.

The 15 unaltered images below represent the Blu-ray. For an additional 25 Wonder Woman screenshots, early access to all screens (plus the 7,000+ already in our library), exclusive UHD reviews, and more, support us on Patreon.