Prior to its release, IMAX’s YouTube account accidentally uploaded a trailer for The Mummy, featuring no sound other than the voice track. This included Tom Cruise screaming as a plane went into a free fall around him, and as fate would have it, that bit in that accidental trailer is the best thing about The Mummy.

Cruise stars, but shows up for a film no one else seems to understand. His retorts and sarcastic barbs recall the futile frustration of Indiana Jones, but with a childish sense of wit compared to Jones’ mannered approach. Cruise is merely generic and obnoxious, weirdly wide-eyed and in a performance he’s given countless other times.

Meanwhile, those around him act out a deadpan serious tale of Egyptian sacrifice, romance, and modern archaeology. No one laughs at Cruise’s Nick Morton. It’s probably because they realize the threat. Morton doesn’t believe any of it.

For a blockbuster, The Mummy holds back its action. A lot of energy is expended on the plane crash, then stalling things for a time as the title character is stuck in chains. Here, Universal sets up the “Dark Universe” (Monsterverse already taken by Warner), a means to revitalize the iconic monsters of the studio’s past. They’ve tried three times now – the so-so Wolf Man, the putrid Dracula Untold, and this mess. This universe is not promising.

This universe is not promising

As a set-up movie, the plot relies on Dr. Jekyll (Russell Crowe). He exists to tell audiences that monsters exist and always have, as if the prominent flashbacks to early Egypt weren’t making this clear.

Sophia Boutella, stuck in skimpy rags for much of the production, spends time chained or under duress. She’s not much for a villain. Her powers do possess people, turning The Mummy into a low-grade zombie flick. Mummy’s technically *are* zombies, although the tropes of the zombie genre embed into this script. Cruise knocks the heads off a few of the undead, while others get split in two for the sake of some action.

The Mummy reeks of production line style, utterly discontented with Universal’s iconic Mummy series. Those were lurid, passionate, and striking, even at their lowest; none of those qualities come to rest in 2017’s The Mummy. Even the Brendan Fraser-starring romps, quirky/kooky as they were, had energy and enthusiasm. This Mummy doesn’t seem interested in those qualities. The come away is just a desperate attempt to start (restart?) a franchise. 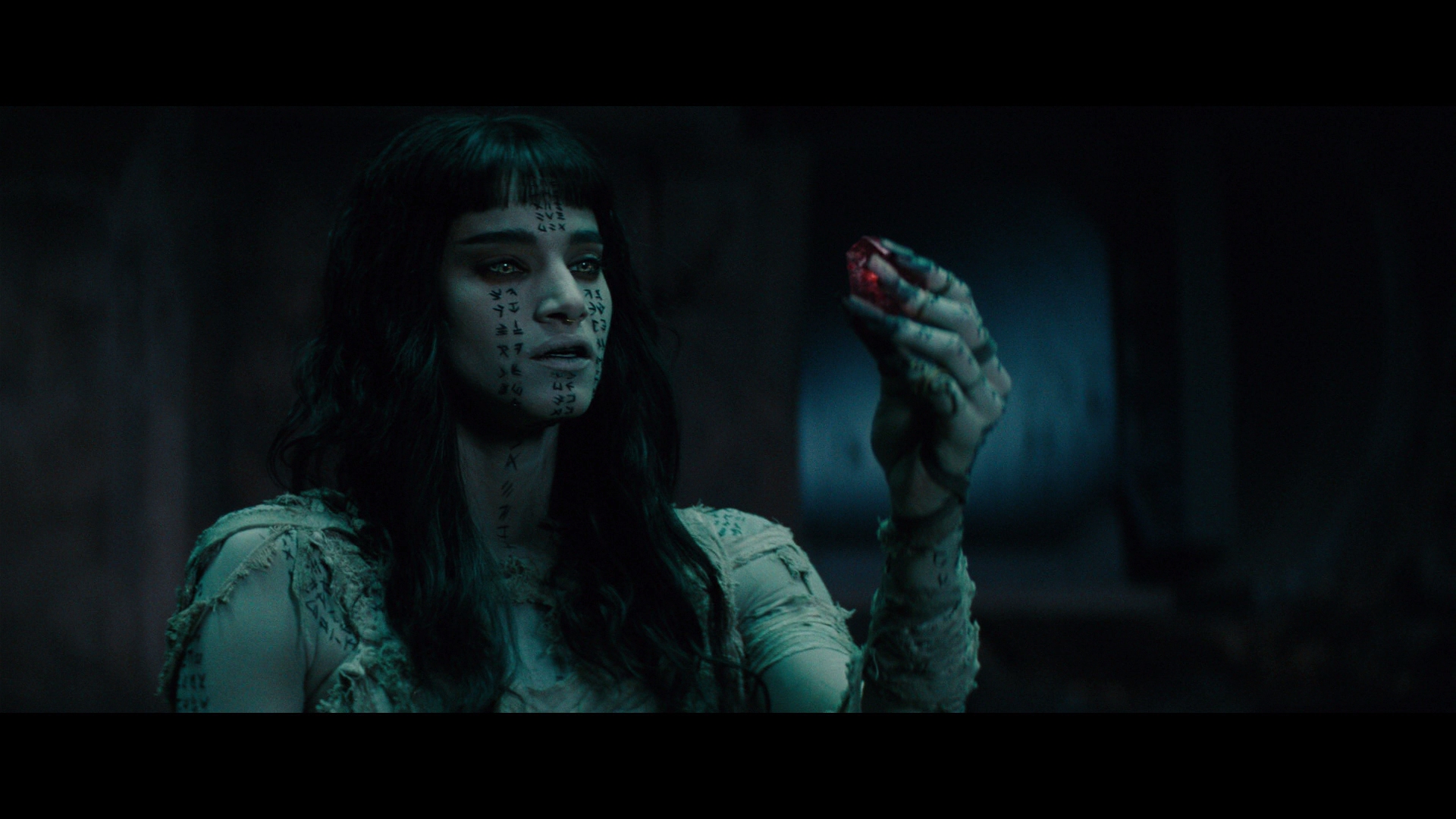 Many scenes of The Mummy were shot on film, requiring the UHD to resolve a grain structure. In this case, Universal’s disc does well, even when clouded by smoke or fog. The Mummy hides in shadow for a significant part of its runtime. Those darker corners won’t hold any compression surprises.

With a fine encode comes fidelity. Striking clarity preserves facial definition. Textural qualities on Boutella’s limited costume brings out the age. For a nerdy example, look at the lines on the windows in Dr. Jekyll’s lab; even as the camera moves, the image is free of aliasing. Any lesser disc couldn’t handle that situation without break up.

Director Alex Kurtzman and cinematographer Ben Seresin give The Mummy a dominant, cloudy look. Inside the tombs holding the sarcophagus, black turns to gray. Expect that frequently. When The Mummy uses true black, it’s gorgeous. An investigation into the plane crash, set at night, handles shadows with grand intensity. Certain scenes require the use of heavy silhouettes. Those hold the necessary impact too.

With the tone and drier shadows comes a reserved color palette. Expect a typical assortment of orange and teals, although with the added density this new format is capable of. Flesh tones wane and few scenes hold any deep saturation (flashbacks only), but the glossy look is appealing.

Where the UHD manages the grain structure without problems, the Blu-ray does not. A mere step down from a total dud, the compression fails, blocking up the scenery. Noise sprouts everywhere. Without the benefit of deeper shadows in the original cinematography, The Mummy fights to remain clear.

Detail is lost as a result. Fidelity falls away too often, and some black crush doesn’t help. Flatter color inhibits the most appealing imagery, adding to a dour disc. At least contrast, where applicable, is strong. Exteriors or backlit scenes (when the team first discovers the tomb) hold plenty of zest.

Thoughts on the Dolby Atmos mix tracks cover both discs, a bold mix, heavy on the LFE. The opening act, ending with the plane crash, holds more energy than the rest. There’s a street level shoot-out with superior directionality, grenade blasts rocking the LFE, an airstrike that hits with intensity, plus a creepy spider invasion where the insects crawl around the soundfield. Come the pay-off crash sequence, the intensity of air pushing into the cabin and creaking metal creates a tremendous soundfield.

The rest plods along, not interested in ambiance besides some cawing ravens. A van flipping overhead makes use of Atmos’ ceiling speakers, although nothing else notably does. The Mummy’s finale, beginning in open London streets, pans dust all around. It’s quick though, and hardly exciting.

Alex Kurtzman, Sofia Boutella, Annabelle Wallis, and Jake Johnson deliver a commentary, available on both the UHD and Blu-ray. The other bonuses sit on the Blu-ray itself, but they greatly disappoint. The only lengthy feature is a sit down conversation with Cruise and Kurtzman, taking place around the time of the premiere.

Oh, a motion comic fills in some events after the movie.

It’s almost impossible to consider the creative talent behind The Mummy when viewing the miserable and disinterested final product.

The 15 unaltered images below represent the Blu-ray. For an additional 15 The Mummy screenshots, early access to all screens (plus the 7,000+ already in our library), exclusive UHD reviews, and more, support us on Patreon.