The Quiet Desperation of Failed Dreams and Lost Hopes

It’s not like everyone can become what they wanted to be. From that simple idea Japanese filmmaker Hirokazu Kore-eda (Our Little Sister, Nobody Knows) crafts the poignant, introspective After the Storm. The slyly humorous drama combines pathos and realism as a man attempts to connect with his son and ex-wife during a raging typhoon that forces them together. After the Storm paints a gently rewarding portrait of failure and family life in a middle-age man that is unexpectedly touching and warmly funny.

Ryota (Hiroshi Abe) is a once-successful novelist moonlighting as a second-rate detective to pay the bills. It has been years since he’s published anything and mostly lives off that minor glory. Once heralded as a promising writer, he’s sunk into the abyss of his current life. An unrepentant gambler like his deceased father, Ryota is a terrible disappointment to the people in his life. Ryota has a young son he barely sees, Shingo (Taiyo Yoshizawa). He has a frosty relationship with his ex-wife Kyoko (Yoko Make) over Ryota’s inability to pay alimony and his general lack of responsibility. Ryota would love to connect with his son and holds out hope that he can somehow win Kyoko back.

Ryota is a flawed, if sympathetic, protagonist that draws you into his sad story. He’s responsible for the mistakes that have happened in his life but tries in his own flawed way to make amends. There is a metaphorical theme throughout the film that Ryota is a flower still waiting to bloom. He refers to himself as a “great talents bloom late type.” At first you think that refers to his writing talents, but only later on does it become clear that Ryota still has the potential to become a better person despite a string of personal failures. That happens through his repeated attempts to connect with Shingo, despite Kyoko looking to marry another man.

Ultimately a failure as a writer and a poor detective that mostly blackmails his clients’ targets for cash, Ryota finds peace in the simple pleasures of reconnecting with his family. That family includes his elderly mother, played by Kirin Kiki. She’s practically a legend in Japanese cinema, known for playing older grandmother roles. The warm relationship between Ryota and his elderly mother is wonderfully sweet, even as she points out the failings of Ryota’s deceased father.

It’s easy to understand how After the Storm garnered critical acclaim from across the world. Actor Hiroshi Abe is supremely natural as Ryota, making the easygoing film a joy to see unfold. Director Hirokazu Kore-eda is a master storyteller and the characters in After the Storm fit perfectly into his carefully drawn inner world. The movie becomes a gentle road to fatherhood for Ryota that is genuinely likable. 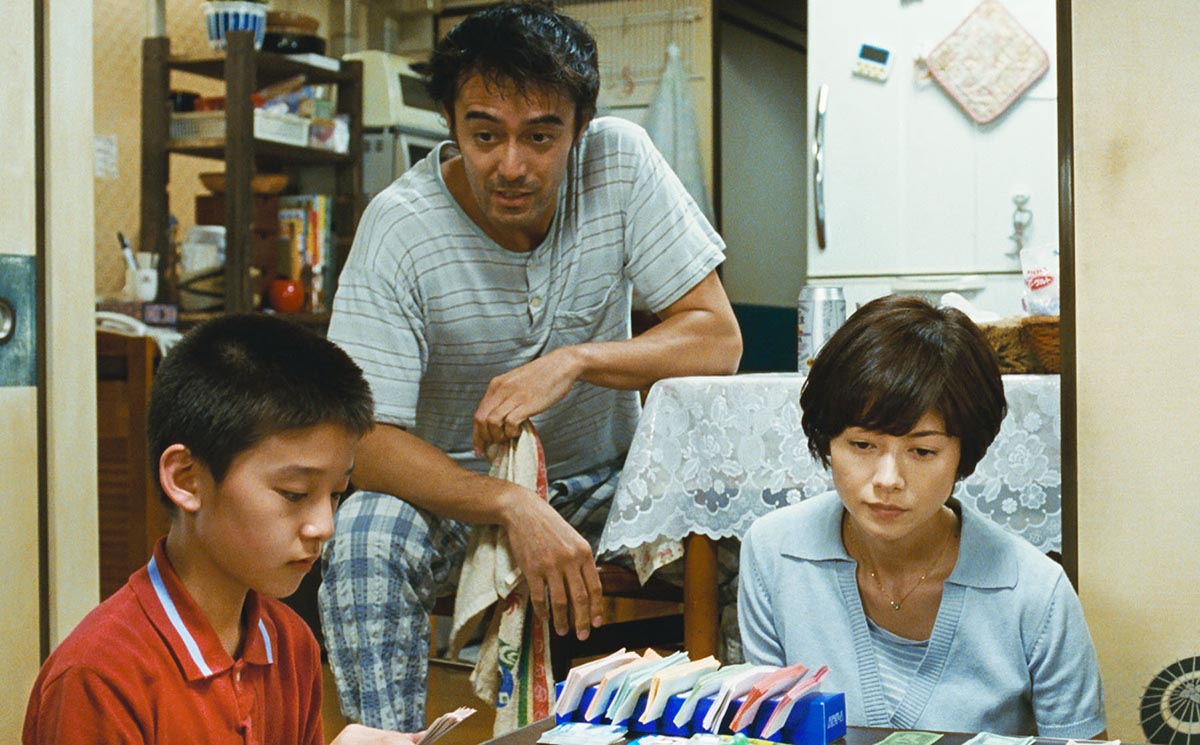 It’s nice reviewing a recently made Super 35 movie like After The Storm, when most of Hollywood started abandoning it for newer digital formats. The 2016 release arrives on Blu-ray looking fairly similar I imagine to its 2K digital intermediate.

Film Movement imports the film in a fine 1080P presentation brimming with clarity. After the Storm is shown in its intended 1.85:1 aspect ratio. Encoded in AVC on a BD-50, technically there is nothing wrong with this presentation. It has clean, consistent detail in fairly sharp imagery.

Hirokazu Kore-eda’s film is downbeat but clear in its steady cinematography. The film-like transfer is in flawless condition. Black levels are strong if you make allowances for the slightly flat contrast. Dramatic Japanese filmmaking often favors a muted palette, avoiding brightly saturated colors. After the Storm offers steady picture quality and crisp definition, though it isn’t eye candy. This is solid Hi-def video that avoids making its own impression on the viewer.

The Japanese 5.1 DTS-HD MA audio is a muted affair for the dialogue-driven film. Like most Japanese productions, surround activity is sparse and largely limited to occasional ambient support for musical interludes. A couple of moments feature more active sound design, particularly the typhoon sequence in the final act. The lossless audio has perfect fidelity and intelligible dialogue. There is adequate dynamic range in the otherwise quiet drama.

A secondary 5.1 Dolby Digital soundtrack at 448 kbps is included. For some reason it is the default choice when first playing the movie. Optional English and French subtitles play in a white font.

Film Movement toils in obscurity on Blu-ray when compared to more established niche labels like Criterion. They are one of the best kept secrets in home video, bringing world cinema to domestic Blu-rays with meaningful special features and nice A/V presentations. After the Storm is another classy release by Film Movement that falls along these lines. The disc has been coded for all regions.

After the Storm comes in a clear Blu-ray case. Comments from director Hirokazu Kore-eda about the film are included on its inside cover.

Making of After the Storm (73:07 in HD) – Made for television, this engaging documentary goes behind the scenes, extensively covering every phase of the production. Starting with writer/editor/director Hirokazu Kore-eda’s first attempts at finishing the script in 2014, it shows actual footage from the movie’s set. It’s narrated by the young actor that plays Shingo. This extended look into the Japanese film’s production covers key choices made by the crew. An involved, intimate glimpse into the film’s genesis, it’s one of the better making-of-documentaries put out in years.

Film Movement Trailers (06:28 in HD) – The following short trailers precede the main menu, all skippable: Soul On A String, Harmonium, & Pelle the Conqueror.

The Last Dream (11:22 in HD; 2.0 Japanese PCM) – An unrelated Japanese short film is included, directed by Noemie Nakai and Carmen Kobayashi. Burnt-in English subtitles translate the Japanese dialogue. In a world where people have lost the ability to dream, a company recycles fantasies from the few people that still have them.

Trailers (All in HD) – Soul On A String, Harmonium, Pelle the Conquerer, Hospitalite, Apprentice, Sea Fog

Full disclosure: This Blu-ray was provided to us for review. For information on how we handle screeners, please visit DoBlu’s about us page to learn more about our editorial policy.

Japanese director Hirokazu Kore-eda’s latest film is another thoughtful reflection on the quieter aspects of life as a man of failed dreams connects with his young son.