There’s one overlapping joke in Baywatch – the lifeguards seem unaware they’re not cops. It’s like The Munsters, where the family lives in bliss, oblivious to ther monster-dom. Here, it’s lifeguards.

Part of this ribs on the absurdity of the original show. Baywatch even makes that joke as co-star Zac Efron blurts it out in case anyone didn’t understand some 40-minutes in. It’s not wrong for Baywatch to spoof or even satirize the ‘90s action scene. At times it does this well, particularly with the ludicrous finale. But it’s not funny. Ever.

Penis gags pour in en masse. Some of those work at least, so maybe Baywatch is a little funny; that’s painful to admit considering the rest, especially considering the talent involved. Dwayne Johnson flexes his way through this muscle-bound masculine comedy, the female co-stars titillating in expected ways. Yes, even in slow motion with bathing suits (also pointed out in dialog, just in case).

In two hours, barely a tenth of this movie even attempts comedy

Even as Johnson parodies himself and Efron plays the same egotistical college-age kid from every one of his other comedies (Neighbors and its sequel included), Baywatch slogs through a drug kingpin tale. Never does the story gain momentum. The script exists to put the crew in less clothing than before, unraveling an obvious trail of corruption while getting into the upteenth argument with cops over jurisdiction.

Routine is fine in a smarter, laugh riot. In two hours, barely a tenth of this movie even attempts comedy. In the intro scene, Johnson makes a run to save a drowning parasailer, all serious. The rest reaches for comedy, putting Efron in drag to off-set the pedestrian hunt for smugglers. That drag gag though goes nowhere. Efron slips in his heels. That’s it.

Hilariously (and unintentionally), Baywatch aims for a bit of moral justification. “It’s a family,” says Johnson, trying to turn pig-headed Efron into the hero. And poor Jon Bass, the chubby tech geek whose entire awkward persona was written by countless other films beforehand. Of course, he gets the girl in the end.

It’s strange how offensively plain Baywatch is. Where 2012’s 21 Jump Street molded itself into something crude and guilty from the source material, 2017 lamentably doused audiences with Chips and Baywatch. The TV comedy reboot genre might be dead now. Good riddance – unless 23 Jump Street is inbound. 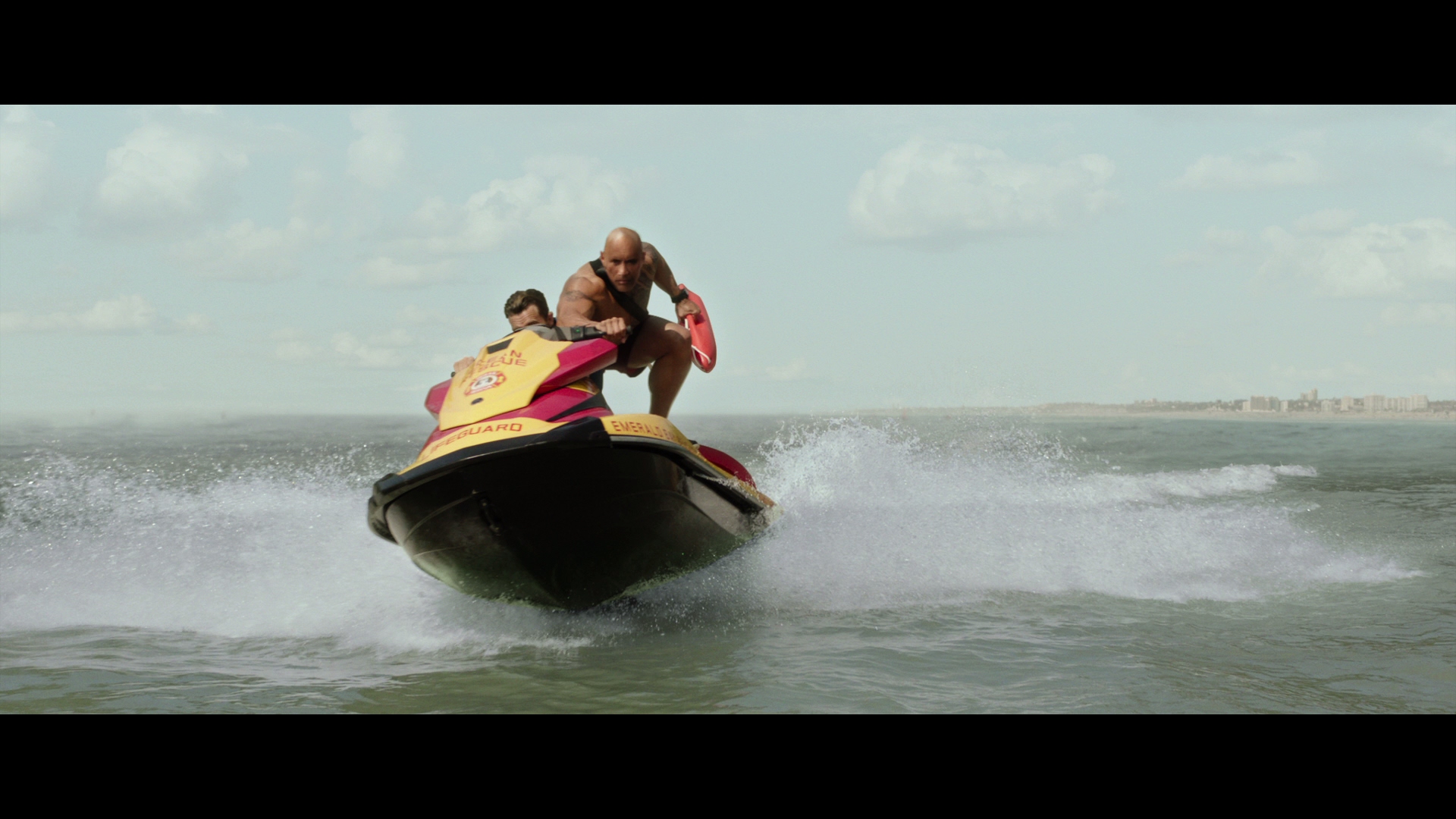 Opening with stunning scenes of sunrises, 4K will be kind to Baywatch. Until the nighttime finish, nearly every scene is soaking in sunlight. The brightness weighs heavily on screen, creating a dazzling bit of dimension with no discernible loss of detail. HDR effects give this one a kick.

Thanks to the clean, digital cinematography (practically noise-less), fidelity renders beautifully. Close-ups continue to show off facial definition in every scene. The few wide beach shots admirably perform with sharpness and a high resolution source.

High on warmth, dense color grading gives the disc an appealing look. Flesh tones steer a bit past tan, if with some purpose. Highly saturated primaries pop, especially the red lifeguard suits. A fireworks display at the finish hits with additional force.

Black levels come into play near the end and at a few parties. Shadow delineation works as expected and density nicely resolves depth. A smokey finish aboard a barge seems to reduce depth, but blame the scenery, not the image quality.

Plenty of fine detail and sharpness show up on this disc. High-frequency elements come together in droves. Close-ups render with tremendous clarity and accuracy. Aided by hearty contrast, depth is nicely handled with an enjoyable sense of dimension.

While never an exacting Atmos mix, the moments of imaging do stand out. A drone pulls off an overhead routine while characters chatter during the first act. Voices pan out into the stereos and underwater rescues fill the soundfield with rushing H2O.

Some big action scenes, including a burning boat, have some zest. Fire spreads around aggressively here, and later, gunfire will sprout in select positions. A helicopter swoops around too, panning around the barge until a fireworks display erupts. It’s vibrant, much like the dynamically powerful soundtrack and score.

Note: On the Xbox One S, I experienced frequent sound de-syncing. The movie stuttered, then lost its sync. A quick rewind for a second corrected this each time. I can’t say if this was the disc or the console.

Blergh. Blargh. Pick one. They both suit the bonuses. It takes 21-minutes to run through the cast in a routine featurette, the longest of the bunch. Continuing the Legacy remembers the show and how the cast came to watch it. The self-explanatory Stunts and Training goes on for nine minutes, capped by some deleted/extended scenes (six of them total) running 10-minutes.

Oh, and there’s a choice on both discs to watch the theatrical or extended cut. Why suffer for the extra six minutes of the unrated edition?

Baywatch seems like a ready-made comedy reboot, but it’s lost in itself when trying to mix drama and lackluster laughs.

The 15 unaltered images below represent the Blu-ray. For an additional 16 Baywatch screenshots, early access to all screens (plus the 7,000+ already in our library), exclusive UHD reviews, and more, support us on Patreon.