Full disclosure: This Blu-ray was provided to us for review. This has not affected DoBlu’s editorial process. For information on how we handle review material, please visit our about us page to learn more.

DC’s Legends of Tomorrow finally finds its niche in The CW’s universe of shows based on DC Comics’ characters in this breezier second season, taking a much lighter and looser approach to its superhero adventures. Move over Arrow, Supergirl, and The Flash, you now have strong competition from this more comedic approach to superheroes.

A marked improvement from its decent but bland first season, which got bogged down by a poorly done Vandal Savage as the Big Bad and forgettable versions of Hawkman and Hawkgirl, those characters are gone in a soft reboot. The Big Bad of season two will be familiar to Flash fans and makes for a great villain all season. Season two sees new members of the team and a fun array of familiar DC heroes in guest roles, including the Justice Society of America and Jonah Hex. This show has always liked sprinkling in DC Comics’ fan service. Hardcore fans won’t be disappointed, though some liberties are taken when translating these characters from the page to the screen. You won’t want to miss Stargirl or Doctor Mid-Nite making critical appearances.

DC’s Legends of Tomorrow features heavily serialized storytelling like all of Berlanti’s superhero shows but season two is an excellent jumping-on point for new fans. Given the cast changes and change in tone, it’s practically a different show from its uneven first season that had its moments but left some fans disappointed. New fans shouldn’t be lost too badly if they dropped season one at some point. Give season two’s lighter, less heavy-handed formula a try.

Covering the good news first, both Hawks and Vandal Savage are gone. This is addition by subtraction if we are speaking frankly. One of the weaker elements of season one, Rip Hunter (Arthur Darvill) sees his role in the show drastically changed and reduced for much of this second season. He’s no longer in charge of the Waverider, the timeship the Legends use to travel through time and space.

The one Legend that doesn’t return for full-time duty in season two is Captain Cold, memorably played by Wentworth Miller in season one. Miller is absent for most of the season. You would think that loss would have a huge impact on Captain Cold’s remaining partner-in-crime, Heatwave aka Mick Rory. If any character gets serious development in this second season, it’s everyone’s favorite pyromaniac. Mick moves from occasional comedic one-liners to being a key part of what makes the team and show work.

The remaining cast members like Brandon Routh (playing the Atom) and Caity Lotz (White Canary) from season one return, meshing well with the new members. Dr. Nate Heywood (Nick Zano), a historian, is added to the team and eventually acquires powers, transforming him into Citizen Steel. Citizen Steel is mostly a Colossus rip-off, able to turn his skin into liquid steel. Zano is a great addition, playing the character with understated charm and a goofy manner. He practically becomes the heart of the Legends by season end.

Another new character added is Vixen (Maisie Richardson-Sellers). Able to summon the powers of the animal kingdom, Amaya feels out of place at first since the Legends plucked her from the Justice Society of America back in World War II. Yes, she is the grandmother to the Vixen that popped up on Arrow. It’s apparent the producers took a shine to showing Vixen’s powers, as she gets more screen time in battles than even the returning heroes.

The overriding arc for the entire season revolves around the Spear of Destiny. A weapon able to bend reality to its wielder’s whims, the Legends must race through various points in time to stop the Legion of Doom from acquiring it. While this Legion of Doom isn’t quite as impressive as it was on Superfriends with a line-up that often consisted of Lex Luthor and the Joker among others, the combined evil of Reverse-Flash, Malcolm Merlyn, and Damien Darhk is about as close as the Arrowverse will allow.

Season two is lighter in tone and finds its identity by taking a much looser approach to superheroes than its sister shows Arrow, Supergirl or even The Flash. The season-long arc is handled much better than season one, as the Legion of Doom provides a far more interesting challenge to the Legends than Vandal Savage. The Legends travel throughout history, meeting everyone from King Arthur to J.R.R. Tolkien. The show isn’t particularly accurate about its history but enjoys using the different period settings with obvious relish. More importantly, the main characters simply work better with improved chemistry. The new additions of Citizen Steel and Vixen help even out the time and allow everyone their own distinct role on the team.

After seeing Supergirl’s second season get bogged down by politics and The Flash’s third season drag on a bit with Savitar, DC’s Legends of Tomorrow might have had the most enjoyable run of them all in its second season. Give this second season a serious try if you grew disenchanted with season one. 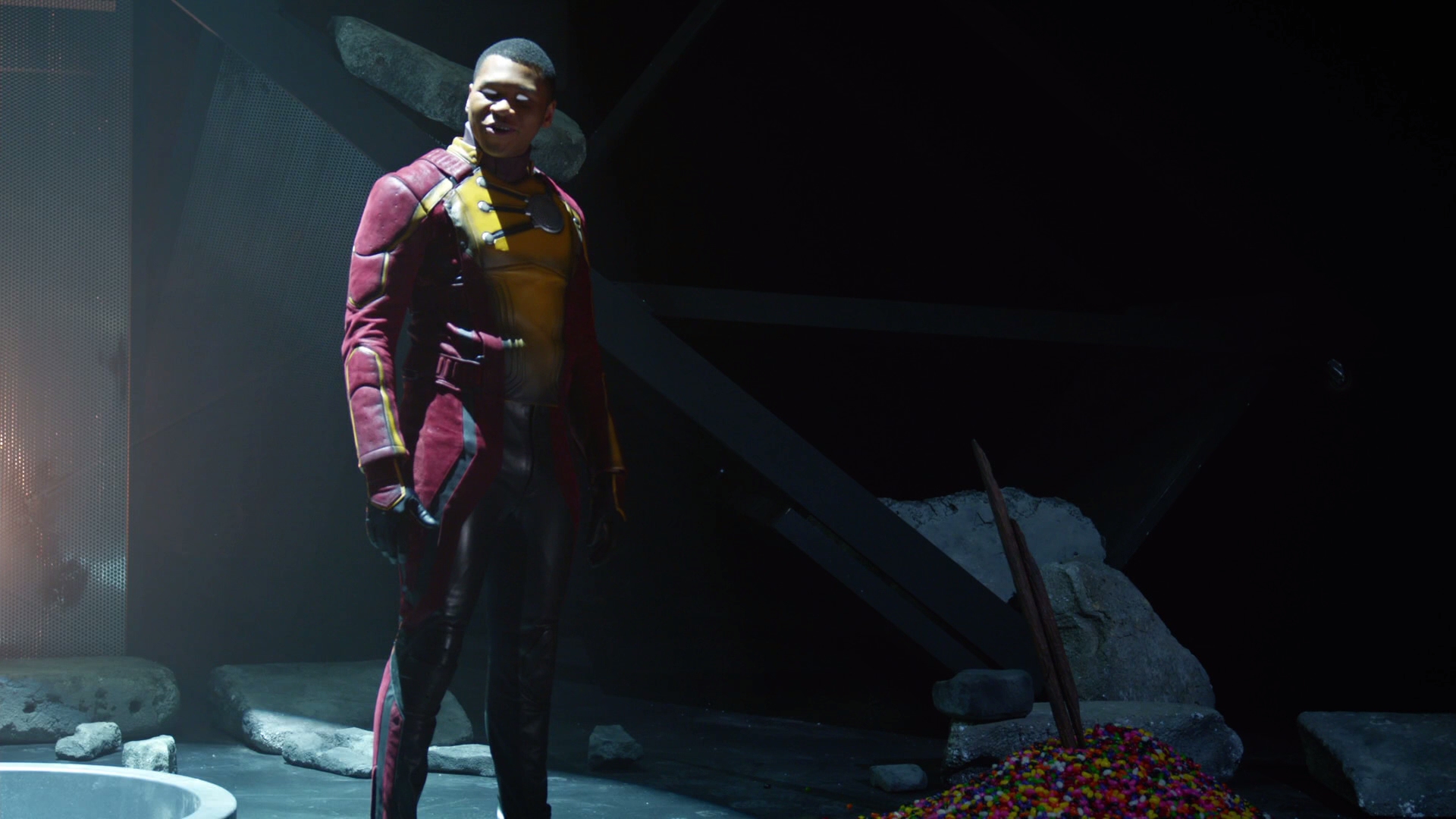 DC’s Legends of Tomorrow has always had a brighter, glossier aesthetic than sister shows Arrow and The Flash on their respective CW broadcasts. That style carries over in this excellent 1.78:1 presentation on Blu-ray. This is superb HD video with crisp clarity and strong definition, especially in brighter exterior shots. Call me crazy but season two actually improves on Legends’ first season’s picture quality.

WB spreads the seventeen episodes of season two over three BD-50s. As they’ve confined television sets to fewer and fewer discs each year, the AVC encode’s parameters have fallen below 15 Mbps. This is clean cinematography that compresses fairly well so there aren’t any real problems from it on this set. A hint of banding and some subtle deterioration in shadow delineation are the only visible side effects. Most viewers won’t even notice them.

DC’s Legends of Tomorrow looks great for the most part with excellent detail and razor-sharp imagery. Avoiding the darker cinematography of Arrow, this is some of the better HD video on network television at the moment. Featuring top-notch digital cinematography, the CW show shines in 1080P.

Dipping more and more into sci-fi territory with jaunts to the prehistoric past and pivotal moments in world history, the 5.1 DTS-HD MA audio offers a visceral mix of action in magnificent fidelity. The surround mix has excellent discrete moments with tight bass and distinct channel separation.

Dialogue reproduction is flawless in the fairly dynamic soundtrack. Action is nicely spread across the entire soundstage. Legends boasts some of the stronger audio design found on television and is one of the few network shows that takes proper advantage of all 5.1 channels.

WB includes nine optional subtitles in a white font, covering most everyone’s needs. They include English SDH, French, Portuguese, Spanish, Danish, Dutch, Finnish, Norwegian and Swedish. For some reason the only included dub is Portuguese in 2.0 Dolby Digital at 192 kbps.

WB throws in a couple of new featurettes and the expected Comic-Con panel on this season’s special features. The three-disc set comes in a standard-sized Blu-ray case inside a slipcase, repeating the now familiar design common to WB’s superhero TV sets. An episode guide is included for reference.

WB does include an UltraViolet copy of the entire season, currently redeemable on VUDU and other UV providers. It should be noted that Warner has changed the wording on all packaging, moving from calling it a “UV Copy” to “digital copy.” Rumors are flying that Hollywood plans to migrate away from the UV system and this seems to confirm it to some extent. The included “digital copy” still fully works with the UV system, but someone in marketing is looking forward to the day when UltraViolet is abandoned for a new system.

2016 San Diego Comic-Con Panel (29:56 in HD) – One of the more subdued comic-con panels I’ve seen from a CW show. The season’s primary cast are all there, aided by producers Phil Klemmer and Marc Guggenheim. Actor John Barrowman makes a surprise appearance after it has already started. The low-energy crowd offers up a couple of awkward questions to the cast. There is a cute moment when Brandon Routh answers Superman when asked which hero he wanted to play as a boy. Watching this panel, I hadn’t realized before how many British actors were on this show.

Allied: The Invasion! Complex (09:56 in HD) – A featurette discussing the massive Arrowverse crossover arc that included Arrow, Supergirl and the Flash. It only features writers and producers in glib chats about the crossover, though it does bring in a comic historian covering the original comic book storyline.

Gag Reel (06:39 in HD) – A compilation of lighter moments with actors flubbing lines or messing up their delivery. Occasionally set to music for the physical mistakes, the most memorable flub is when one actor by mistake references the Avengers.

Deleted and Unaired Scenes (HD) – Occasionally presented unfinished without proper VFX, most of these scenes were trimmed or cut for time. None run much longer than a minute or two and have to be watched on their own, outside of any context within the episode. It would be nice if WB edited them back in to each episode they were intended. Episodes #1, 2, 3, 5, 6, 12, 13, 14, and 15 all have deleted scenes available.

A fun, loose season of superhero adventure throughout time and space as the Legends square off with the Legion of Doom.

The unaltered images below represent the Blu-ray. For 10 exclusive Legends of Tomorrow: Season Two screen shots, early access to all screens (plus the 7,000+ already in our library), exclusive UHD reviews, and more, support us on Patreon.