Alien: Covenant doesn’t just refuse to answer questions brought up by its predecessor Prometheus: It destroys any fragments left from that movie. For the rest of its time, Ridley Scott’s direction plods through languishing dialog scenes and feeble monster attacks. If this all seems familiar, Alien: Covenant stays as close to the tenants of the franchise as possible. Elements of faith, what AI might become in the future and its sense of humanity seem interesting, but rot away as the film enters its action phase.

Read our full review of Alien: Covenant for more.

The colorist for Alien: Covenant drains much of the visual pop. If saturation occurs, it’s from the various computer screens or holographic displays. Either they sizzle from outstanding HDR implementation or reflect onto the actors with some intensity. The film stays monochromatic, typically with blue, sometimes orange, fire sources permitting.

Yet it’s strangely beautiful. Color density isn’t lost. A persistent gray overcast on the alien planet feels properly cold and unwelcoming. Some early forest scenery shows off some bright greens for a bit, allowing a bit of escape before the mood turns dreary again. It’s a crisp, sensible look, and attractive in a way few digitally graded films are anymore.

Despite the 2K source, Alien: Covenant pushes extensive fine detail. Exteriors of the ship in space resolve computer generated textures en masse. Coasting above the planet, the space vistas showcase sights that feel utterly organic. Better still, details in close handle high-frequency information as if it’s nothing. Facial definition maintains a rare consistency. Once on the planet surface, mountains and waterfalls show themselves off for the camera.

All of this receives help from the black levels, soaking into the image with great dimension. For a movie this dark, it’s essential. Space contains pure black as does David’s underground home. Awesome shadows holds the image quality together even in the underlit areas. Generally, contrast isn’t as vibrant. Limited sun and interior sights looks grayed out. Still, there’s depth.

Fox’s encode handles small moments of noise within otherwise clean imagery. Opening scenes use a light grain filter. That’s of no concern to the compression. Neither is banding, held off even where expected like in flashlight beams. 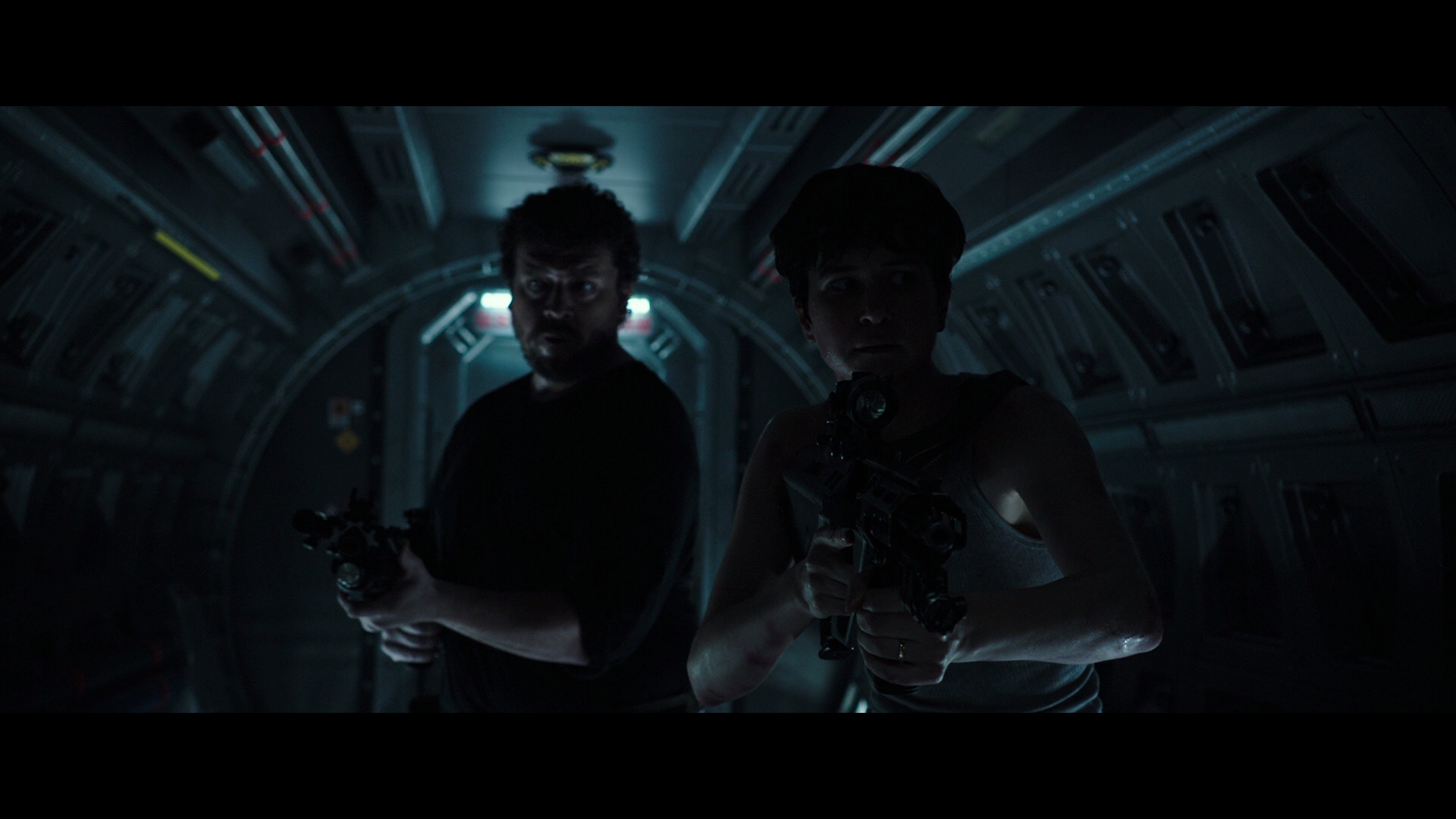 Black crush and a loss of shadow detail lead to some problems for the Blu-ray version. The loss of dimension costs Alien: Covenant to a degree. Early scenes handle this better than those inside David’s makeshift home. The flute sequence in particular loses fidelity.

A few compression bothers creep in. Noise shows up inconsistently. It’s minor. Banding will prove bothersome, both in space when looking toward the sun and inside with all of the waving flashlights. Regardless the disc pumps out enough fine detail to be a looker.

Alien: Covenant stuns with the clarity of its Dolby Atmos track. Overused as the word tends to be, “immersion” is appropriate. With a constant flow of water, whether rain, drips, or waterfalls, the spectacular ambiance keeps up for the full runtime. Although xenomorph attacks remain few, the creatures vocalize (as they do) before the assault. Those sounds come from every location in the sound field. Directionality keeps up the level of fear.

Ridley Scott comes into the studio for a solo commentary on both the UHD and Blu-ray. On the Blu-ray alone, thirteen extended/deleted scenes follow that in the menu, running 17:38 total. Six lore-expanding shorts sit under the banners USCSS Covenant and Sector 87. Each is brief at a few minutes total.

The big one here is Master Class, a four-part making-of, ending at just under an hour. Behind-the-scenes footage helps between the typically dry talking head interviews. A production gallery and trailers fill out the rest.

Ridley Scott dodges the questions of his previous work when handling the dire Alien: Covenant, a slow retread of the series core.

The 15 unaltered images below represent the Blu-ray. For an additional 19 Alien: Covenant screenshots, early access to all screens (plus the 7,000+ already in our library), exclusive UHD reviews, and more, support us on Patreon.