Ronin isn’t a grand masterpiece. The heist movie tropes and archetypes fill this film; the tech specialist; the driver; the gunman; the asset man; the mystery woman in charge of it all. They’re in it for a silver briefcase, the textbook MacGuffin, causing some 80 deaths in its wake. Russians want it. Irishman want it. So do the five men assigned with retrieving it.

For the mystery and intrigue to a story that demands patience, Ronin shows off comedic self-awareness. Ingesting the movie car chase, Frankenheimer spits out two genuine classics. The first plows through fruit carts, construction zones, a curbside restaurant, and a few hill jumps. The only thing missing is a plate of glass. The second, a sure all-timer, begins with a key character buckling himself in, as if a literal interpretation of a movie trailer, speaking for the audience. What follows is a perverse car smashing, truck tipping spectacle, directed without tricks and showy, self-acknowledging camera angles. Never, though, does this chase ring false.

It fits Frankenheimer’s ‘70s-like aesthetic, together with Robert Fraisse’s cinematography. Lurking handheld cameras, precariously placed during the action, give Ronin a dazzling, involved quality. Mixed with blob-ish, over saturated blood squibs, and Ronin reads more like a cinematic time capsule.

In-between the spacious shoot-outs and wrecking ball-like driving choreography, Robert De Niro leads a stellar cast. He’s alongside Jean Reno (the “man who can get anything for the job”) who starred in two big studio productions released in 1998 – this and Godzilla. Ronin wins out. Reno’s almost disinterested mannerisms and De Niro’s vocal hunt for answers nearly turns Ronin into a buddy flick. The performances are disparate enough for the genre swap to work.

Ronin ends happily, mostly anyway. The events inadvertently silence an Irish civil uprising. Greed for a metal box – of which none of these characters know the contents – leaves countless dead, but at least the Irish solved their conflict off-screen. This thematic prowess peeks though in this sly, often acerbic script. It’s a movie filled with not so good people doing not so good things to each other, but with an aberrant wink to cinema’s tricks. 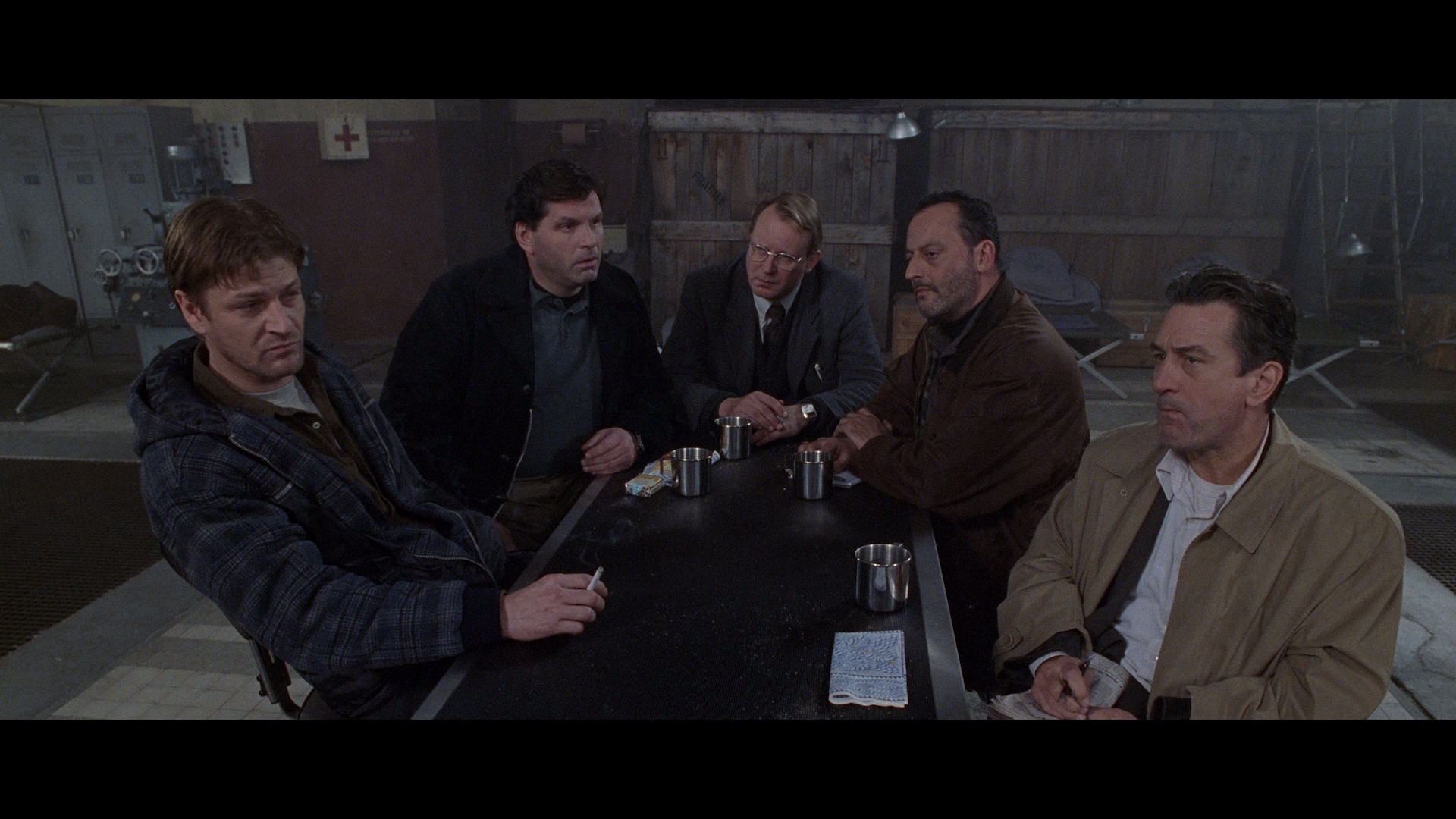 Originally released by Fox/MGM in the early days of Blu-ray (in an MPEG-2 encode), Arrow’s disc boasts substantial improvement. This does not mean one area. Every aspect of Ronin looks better here, giving the film new life on home media.

Although a stray spot of dirt and a scratch or two remain, the print used is glistening otherwise. This means a thick, imposing grain structure, handled with care by a careful encode. If the images devolve into digital noise, it’s not visible during standard viewing. This includes areas of heavier grain still, held back without digital remnants.

Maintaining the muted, almost vintage color palette, the boost here comes from color density. While MGM’s Blu-ray appeared faded, Arrow’s flushes the screen with deep hues while keeping the desired tone. Even the French vistas stay dry, muted if beautiful in their design.

A boost to contrast helps. Thankfully, this does not introduce any additional problems. Black levels hold a firm grip on the images, with some natural crush as a result. The benefits though, including strong depth and dimension, alleviate the loss of shadow detail.

Some rough patches of dialog sprout up in this DTS-HD track. Around 10-minutes, Jean Reno sounds positively garbled. A few other similar (if less severe) instances pop up across the two hour runtime, an odd quirk at least.

The rest uses a pleasingly natural soundstage. An early tunnel shoot-out reverbs well, plus the bullets pass between channels with what sounds like perfect accuracy. Later, an underground chase does the same routine, nicely spreading the shots around.

However, it’s likely someone comes to Ronin for the car chases. With cameras placed right in the center of the action, the level of tracking and panning is high. Screeching tires and loud engines break through the stereos as well as the rears. Debris fields roll around as roadside marketplaces shatter. For a bit of boom, a few explosions have weight, in particular a bomb going off.

Outside of the action, the soundstage keeps active. Ronin’s placement in tourist country means always active situations, thick on ambiance.

Arrow finds cinematographer Robert Fraisse, sitting him down for an interview ranging from his schooling, to this film, and his total career. It’s 31-minutes and clearly loaded with depth. A 1994 vintage feature has Quieten Tarantino discussing De Niro’s career. This spans 27-minutes.

John Frankenheimer steps in for a commentary recorded before his death in 2002. An alternate ending is offered too. In a separate menu, Arrow includes six legacy features, mostly light material, if worth a watch for their behind-the-scenes footage.

The 15 unaltered images below represent the Blu-ray. For an additional dozen Ronin screenshots, early access to all screens (plus the 7,000+ already in our library), exclusive UHD reviews, and more, support us on Patreon.