Blending a bit of recession revenge and twilight years comedy, Warner’s remake of the George Burns-starring Going in Style isn’t one for anxiety. It’s playful, harmless, and good-natured, reeling in laughs on the strength of its cast.

In those terms, Going in Style isn’t Morgan Freeman’s first go at the senior living sub-genre. He paired with another fine group in Last Vegas, an equally placid and kind comedy outing. These roles suit him – Freeman is a better comic actor than he gets credit for.

Much of this Zach Braff-directed outing deals with complications of aging and the pressures of the recession. Caine’s character comes under fire courtesy of the bank’s crummy mortgage plan. Freeman deals with kidney problems. Arkin is joyously irate and learns a bit of humility as time passes. Most of these circumstances feel menial – Going in Style won’t hold down the drama for long. It’s quick with the laughs.

Going in Style earns easy empathy points, partly from the circumstances, and again through the cast’s age. The script can get away with plenty just on age-based humor alone. To practice for the heist, Caine and Freeman plot a “daring” grocery store shoplifting spree. No one loses empathy points for stealing a whole pot roast at age 80. That’s just gutsy.

However, this gives Going in Style a kind of “too easy” vibe. While it touches on the reality of losing pensions and homes, the film never takes it anywhere. Despite the real world issues, Going in Style isn’t drama worthy. With a bad kidney, Freeman doesn’t confront the reality of American health care, leaving this New York story feeling like total escapism.

There’s nothing wrong with a touch of fantasy. Everyone needs some on occasion. Going in Style breaks through the intended demographic to leave something behind without stress, care free enough to satisfy anyone willing to give 90-minutes. Despite the lack of challenge, seeing Caine and Freeman commandeering a motorized cart and gleefully driving it through midtown is worth a watch. 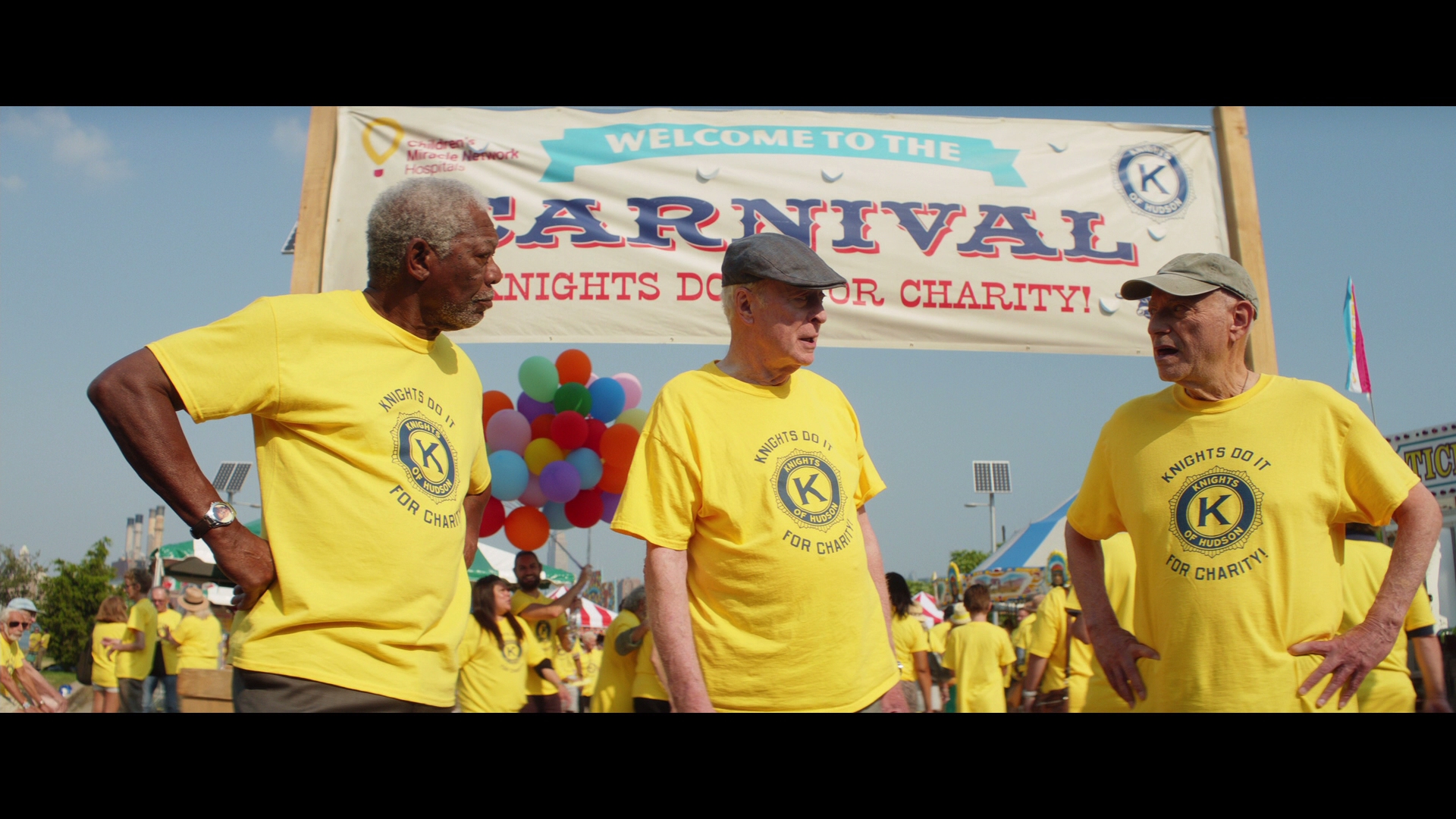 Pleasing digital video feeds this Blu-ray presentation. Straightforward cinematography means plenty of close-ups, superlative in the fine detail. The same goes for New York in a supporting role, shot from the air and capturing the fidelity of the scenery.

A bit of black crush and noise is easy to brush aside. The level of high contrast and dimension afforded to Going in Style is more than enough to make up for anything amiss. Bright exterior lighting and convincing interiors – also bright – keep the imagery peppy and lively.

This all comes coated in a nice layer of primaries, saturated well with natural flesh tones. Color carries energy and Going in Style never loses itself. It’s always appealing to watch.

When robbers first walk into a bank, they open fire into the ceiling and the guns have far more energy than expected. Tremendous LFE support fills the room for these few shots, opening the film (and the DTS-HD track) with some kick.

The rest is ambient, nicely creating a soundstage inside restaurants and especially at a fair. Freeman steps into a haunted house and kids scream in each channel. The effect is pleasing with an adequate sense of directionality.

A strong cast of Morgan Freeman, Alan Arkin, and Michael Caine helps Going in Style rise above the fantasy-like comedy within.

The 15 unaltered images below represent the Blu-ray. For an additional 11 Going in Style screenshots, early access to all screens (plus the 6,000+ already in our library), exclusive UHD reviews, and more, support us on Patreon.