The Fate of the Furious shot its opening scenes in Cuba, no small feat considering the slew of political sanctions that left the country void of American presence. Some kudos is due for expressing a small amount of Cuban culture, at least before drowning it in sexist stereotypes, then destroying it with a preposterous street race. Still, the production team tried.

The first time Vin Diesel gets behind a wheel in this improbable eight sequel, the car catches on fire. He then drives it backward – still on fire – to win a Cuban street race. It’s the most plausible action scene in the movie and certainly not the last to involve flames.

Focusing tightly on Diesel’s Dominic Toretto, Fate of the Furious barely touches the inner dynamics of this awesomely dopey series. The crew is who they are, now wound together so tight, nothing can upset their balance. It’s a blockbuster of sequel bait, coasting while the energy that used to be spent building a concept of “family” now goes into the action.

So it goes, delivering a $250 million destruction derby, throwing out wrecking balls, self-driving cars by the hundreds, and a nuclear submarine, because sure, nuclear subs fit with Fast & the Furious’ ever increasing insanity. All of this overrides good sense. Then again, good sense would erode the theatrical playability at Fast’s heart.

… if there’s something wrong with Dwayne Johnson nudging a torpedo into an opposing car, then why bother serving popcorn at the concession stand?

Casting Charlize Theron as the relentless, cold villain (and even connecting to her to previous films) leads to a barrage of movie hacker cliches. Theron and the Fast crew’s Ramsey (Nathalie Emmanuel) slap their fingers over glowing keyboards, slinging commands the audience only ever understands as “hacking.” It’s a fight in a digital space, without logic of reason, and in Fate of the Furious, that’s the standard.

Maybe it says a lot that audiences let summer blockbusters reach this point, wherein a few hundreds cars falling onto other cars in the middle of New York is sensible entertainment. Popcorn cinema bombed viewers with such stupidity, it’s accepted now. At least there’s a wink to Fate of the Furious.

Even as it’s trotting out nonsense, the back-and-forth dude bro dialog brings everything down to a certain low-grade level. The fun is perverse in terms of casualties. It’s readily accepted and a wonder why this is so enjoyable. But, if there’s something wrong with Vin Diesel outrunning a heat seeking missile or Dwayne Johnson nudging a torpedo into an opposing car, then why bother serving popcorn at the concession stand? 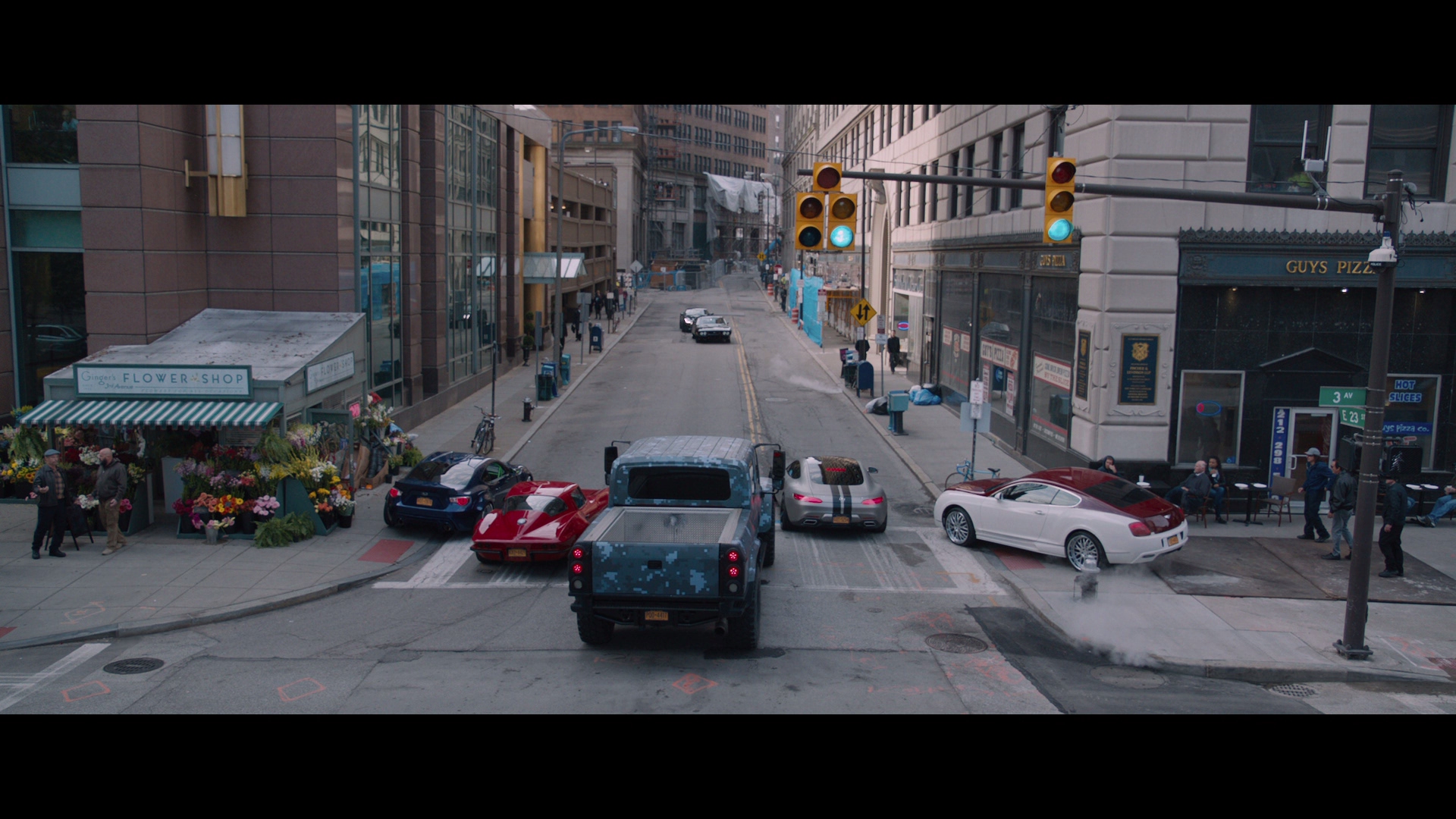 Opening with the vistas of Cuba, the gorgeous contrast and color under the exterior sunlight is a marvel. HDR boosts already high contrast, installing depth and dimension to the 2K source images. Fidelity while the camera pans over the cities impresses as much as this format can.

Issues with the disc primarily lie with the source. Focus tends to erode softness, wavering a bit and swallowing fine detail. When visible, however, the clarity is incredible. Deep close-ups of Dwayne Johnson, hard lit from the side, douse the screen with high-frequency details.

Color timing brings up the second problem. Black levels die, keeping Fate of the Furious flat. Heavy saturation of blues settle in when dealing with interior scenes (and the entire icy finale), taking depth and primaries with them. Black levels are the true loss, fading into browns and grays. That decision drains the disc of dimension.

When all is working, Fate and the Furious is a showcase of fireballs and resolution. The digital source carries full clarity. Excusing one flashback that invokes noise on purpose, the UHD maintains image purity. Nothing gets in the way other than the source itself.

On Blu-ray, the black level problems of the UHD compound. Depth sinks when indoors too often, weakening the intensity of the imagery. Dimensionality is fantastic when in full. Aside from a hint of crush, Fate and Furious misses little when everything is in order.

Gracious and brilliant color sweeps over the opening Cuba scenes. Hyper-saturated primaries flow onto the screen, producing especially vivid reds. An orange slant to the flesh tones fades as Fate of the Furious drifts into blues.

All of this is well detailed, excusing a bit of up-and-down focus. Universal’s encode toughens up to handle fast-progressing explosions or a debris field caused by a submarine. Facial definition stays prominent where possible, and city aerial views retain sharpness.

Welcome this DTS:X track (on both the UHD and Blu-ray) with open arms. Ambient crowds in Cuba bring on a lively introduction, leading to tremendously powerful engines during a street race. Next is a wrecking ball, plowing (and panning) through vehicles with every bit of the intensity expected.

Like the previous films on UHD/Blu-ray, the mix never stops being absolutely enormous. The level of power granted to gunfire only seems to escalate the longer the Fast goes. Precision movement between channels sends cars passing through the soundfield, making the most of the additional surrounds.

By the climax, the swell of explosions and debris fields double up on the best material for home theaters. It’s loud, the subwoofer power can wreck a room, and the precision involved to give the positional channels consistent work is sublime.

F. Gary Gray steps into the studio for commentary duties, the best extra. The Cuban Spirit wins the featurettes, detailing the culture and the complexities of getting into Cuba to film. Four character profiles, three featurettes on car design, and three more on the stunts fill out the rest. Two extended fight scenes then add a bit more bite to the brawls.

No excuses: The unrelenting stupidity of Fate of the Furious is a touch tiresome, but the action concepts are too fun to care.

The 15 unaltered images below represent the Blu-ray. For an additional 21 Fate of the Furious screenshots, early access to all screens (plus the 6,000+ already in our library), exclusive UHD reviews, and more, support us on Patreon.