Despite a busy and choppy pace, Railroad Tigers pops with comedic enthusiasm. It’s a nationalist story, set during the Japanese occupation of China. The bumbling, often incompetent portrayal of the occupiers breathes only propaganda.

It’s a fit for star Jackie Chan (and his son, Jaycee), known for his pro-China political views. Here, he’s part of a band of thieves, robbing Japanese supply lines. This leads to a number of creative scenes, including a high-wire act when thieving explosives and intellectual games to outwit the rather dimwitted authorities.

Much of the comedy plays obviously and large. That’s the Chinese way. People overreact and oversell, charming in its way and worthy of laughs. It’s playful, too much so to be offensive. Outside of tense shoot-outs, even fighting is played with gags. Few martial arts come into play. Chan avoids the physical strain, but still finds his comedic streak in other ways. He’s a treasure, even into his 60s.

the tone and pace insinuate a significant production, bred for all-encompassing entertainment

Certainly, Railroad Tigers has aspirations of matching the American blockbuster. Even with the culturally different comedy, the tone and pace insinuate a significant production, bred for all-encompassing entertainment. A bevy of special effects show up, some successful, others not (mostly the latter). There are pricey costumes too, spread throughout this ragtag hero’s tale.

Railroad Tigers is separated by title cards every half hour or so. In this way, the film acknowledges a rather bumpy style. Crude edits disjoint the scenes, mixing and jumbling them as if being broadcast on network television. Expecting a commercial break as the screen frequently and awkwardly drops into black isn’t wrong. Also, Railroad Tigers gets going before settled, throwing characters at the screen prior to a sharply directed heist.

All of Railroad Tigers is leading toward a wild, well concocted finish. It’s full of vibrant action, set aboard a locomotive at full speed. Tanks use their turrets like swords, explosives hang precariously in a box car, shoot-outs occur between cars; it’s wonderful and lengthy, some 20-minutes of straight action, capped by satisfying character conclusion.

It’s fun. That’s the critical synopsis. Too long maybe, cut together a bit cruddy, and definitely not without a satirical anti-Japanese slant, but Railroad Tigers doesn’t rest long enough for those misgivings to linger. Soon, Railroad Tigers is off on another adventure or random spot of comedy, finished with an inspired sense of wryness. 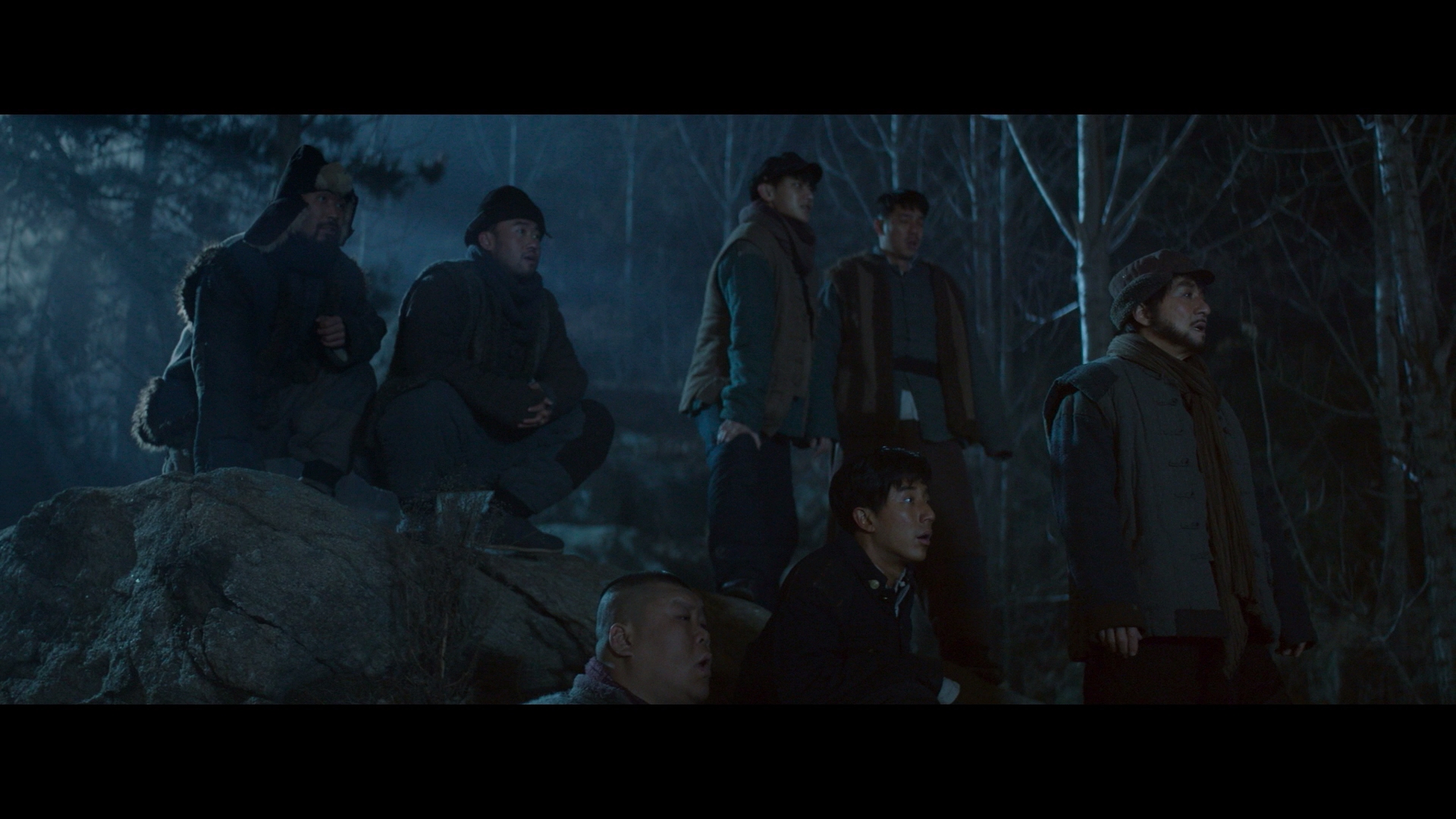 To say Railroad Tigers on Blu-ray has some problems is to ignore the entire disc is a bit of a mess. Well Go transfers this import with an inadequate encode, frequently choking on any complex imagery. Wide shots of train stations or wheat fields show DVD-like artifacts. One shot of Chan exiting a restaurant while smoke billows by looks like a first-generation YouTube video considering the banding.

This leaves a glossy if artificial look behind. Digital cinematography stagnates, producing minimal detail despite the visibly high-resolution source. Some of the gorgeous scenery still looks as such, if with a loss in firm fidelity. Luckily, it’s mostly noise free. If the artifacts stay away, Railroad Tigers maintains a clean look.

Bringing with it a bright, generally high-contrast image, the predominance of sunlight fills the screen. A touch of blooming now and again bakes in additional heft. Black levels won’t reach those levels (sometime they’re gray) but Railroad Tigers still layers on depth. The yellowish, vintage tint to the color timing doesn’t come at the expense of primaries.

Coupled with a DTS:X track, much of Railroad Tigers remains in the front part of the soundstage. Panning between those channels is superb, constant, and misses nothing.

When the rear channels open up, it shows the mix is paying attention. Station ambiance, infrequently, does build a natural enveloping effect. Guns fire and hit their targets with notable effect, but again, not each time.

A couple of LFE bursts cause a quick rumble. Generally, it’s reserved. The tank jousting provides a hit or two and the eventual stand-off with mounted machine guns throbs convincingly.

The disc offers four short featurettes, one on director Ding Sheng, the others on the dangers of shooting, characters, and VFX. Skip them. Head for the making of (21:21) that covers everything above and in better detail. Browse the trailers that follow in the menu if you wish.

There’s plenty of fun to be had with the Jackie Chan-starring Railroad Tigers despite the hyper-nationalist tone and crummy editing.

The 15 unaltered images below represent the Blu-ray. For an additional 13 Railroad Tigers screenshots, early access to all screens (plus the 6,000+ already in our library), exclusive UHD reviews, and more, support us on Patreon.