Although an multi-national crew works aboard the International Space Station – a point Life draws on – it involves no border politics. Life isn’t about clashing ideologies or pride of country. When a Martian lifeform is loosed within ISS quarters, the astronauts stick sharply to their designated roles. Strict protocols override any cultural differences.

Yet, the lack of conflict, the listless dramatic investment, and strictly written characters is an absolute handicap. So structured is this team, they never leave their assigned obligations. They exist more as programmed androids than human. Routine is their existence, not personality.

Life has other problems. Although masterful scientists, enough to earn their place aboard the vessel, they continually override decent sense. While the discovery of organisms not-of-Earth brings understandable excitement, no one has sense go hands off this collection of rapidly growing, learning, and evolving cells.

… titled “life” despite having so little

What’s left is a trapped-in-a-tube space drama, think obviously Alien or its progenitor, It: The Terror From Beyond Space. Queasy monster kills feel gruesome for the sake of it, spilling bunches of zero gravity gore. On top of this is a symphonic score and unusually placed art cinema aesthetic. Oddly, the latter two work against Life. It’s instantaneously flush with ego, showing off a multi-minute master shot to open, recalling the allure of 2001 if without 2001’s gentle, exotic mastery.

Those parallels and inspirations beg for a, “Why bother?” approach to viewing. Re-run Alien. Other than Life’s contemporary setting and a chilling ending (playing on a classic bit of visual misdirection), the plodding narrative is almost inconsequential. Emphatic as the intention is in Life, without character complexity, each grisly death just means another on-board specialty system loses its operator as opposed to an important loss of life.

And the creature itself, squid-ish and elegant, but without personality. It’s merely a floating form, crushing and puncturing. Different in design as this creature, named Calvin, may be, there’s a reason for visual elegance. Calvin is exotic, yes. Interesting, no. He fits with the rest of the crew.

This leaves Life utterly barren, ironically titled “life” despite having so little. It’s almost reckless in the way it trudges through the routine and familiar, greenlit likely for its connections to the current space movie boon than conceptual interest. A bit of star power fizzles and with finality, ruins everyone’s day anyway. That early sense of cooperation without borders? It’s gone by the ending. 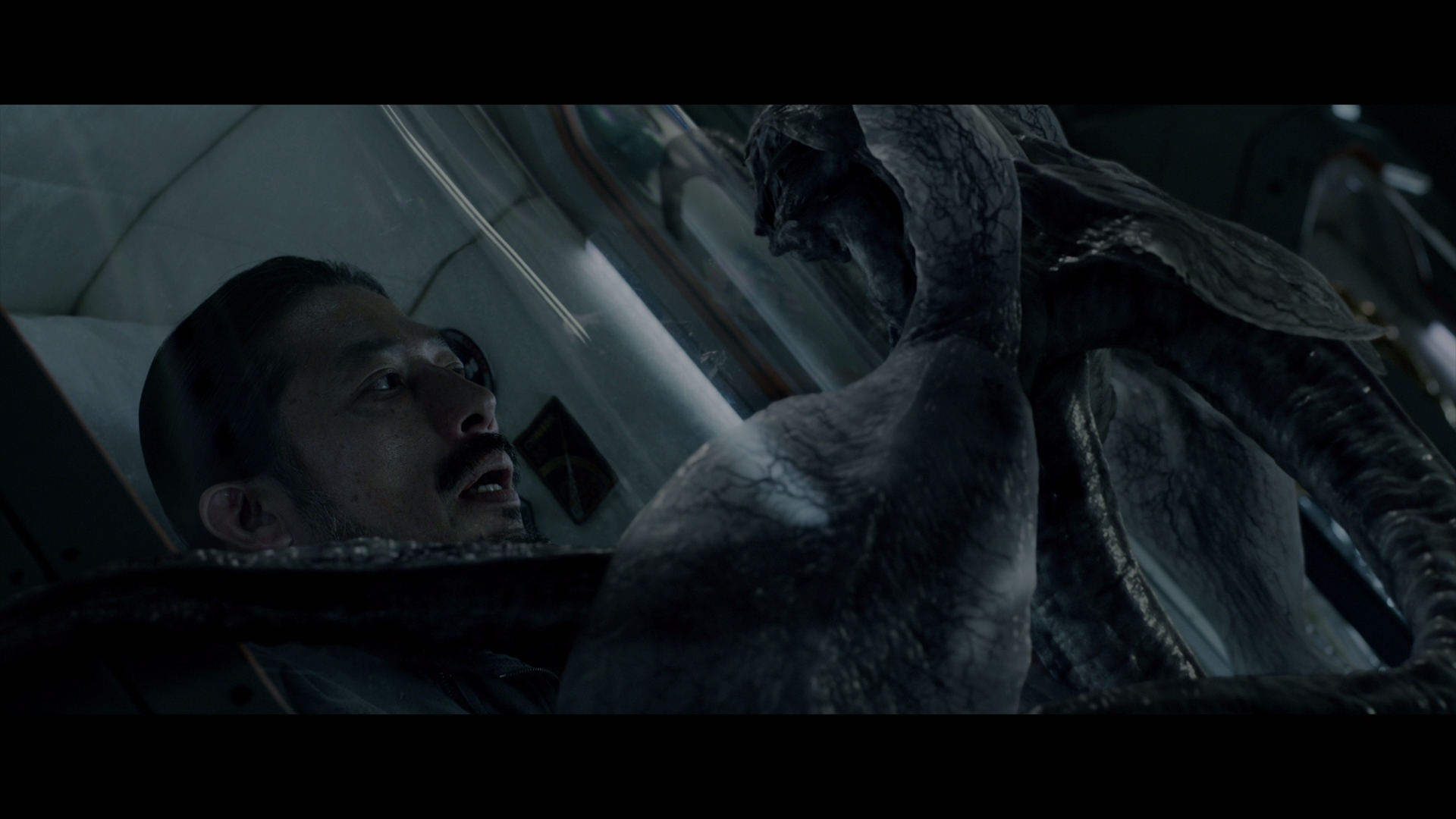 Mastered just shy of true 4K, this material makes for a stellar presentation. Extreme fidelity shows in close, popping with gorgeous facial detail. Medium shots likewise astound. Digital effects of the ship exterior shine, and without the aliasing issues present on the standard Blu-ray. If resolution is what you need, skip to a brief shot of Times Square. Shot from a high rise, the people on the ground – hundreds of feet below – show up individually. The level of clarity in that shot is absurd.

A strong helping of HDR effects gives sizzle to the station lights. Early scenes of Calvin sprouting to existence inside of a brightly lit tube dazzle with their intensity. Also pay attention to Arion Bakare’s gloves in close-up. The clarity is such it’s possible to see the actual thickness of those gloves and his hands through the translucent material. As expected, shots of Earth with a rising sun behind it earn a reference level stamp. Brilliant shadows with only light crush creates gorgeous dimensionality.

However, Life suffers from substantial noise. Vertical banding hinders the disc on occasion, quite rough immediately after Calvin is brought to life and the crew celebrates. It’s persistent. While rarely a detriment to detail, the presence is difficult to ignore. The inconsistencies and thickness tend to stamp out the sense of clarity.

Much of Life is filled with shots of the astronauts peering through windows or staring into space. Elegantly lit close-ups make for spectacular contrast and fidelity, fast adjusting focal tricks swapping between actors. Substantial facial definition resolves wonderfully on Blu-ray.

Given the constant presence of visual effects, noise isn’t a surprise. The amount of noise is. Some shots become entangled by low light artifacts, robbing the image of some clarity. Vertical banding infests other imagery. Encoding on the part of Sony is an unlikely culprit, rather the source material.

Interior lighting on the ISS – and what little of it there is – requires heavy, thick shadows. This leads to crush, if not enough to help with the noise. Too thick shadows or otherwise, Life still offers pleasant depth. Again, those close-ups hammer out dimension as if it’s nothing.

A shimmering problem opens Life. The starfield proves bothersome as the camera pans. Some small details on the ship exterior alias slightly. Changing with the needs of the scenery, color work stays within a chillier blue, occasionally turning to reds when warning lights flare. Neither handle noise any better than the other.

Excellent imaging highlights the Dolby Atmos (UHD) and DTS-HD 7.1 mix. With a mobile alien in an enclosed space, it juts around the interior, clanging into metal or otherwise making itself known sonically. It’s a fun effect. General ambiance works the same, from the hum of machines to engines reverberating throughout the halls.

For a bigger punch, skip to a hull breach. Escaping air takes a plethora of objects with it, passing by while using the full extent of the soundfield. Said air also creates a hearty hum in the low-end, accentuating danger. With all of this occurring, smaller effects still audibly slip in, including the alien slithering about. Fun design work.

Bonus features barely make it past the seven minute mark, choosing to hit an EPK level of quality instead of anything significant. Life in Zero G wins for most interesting, detailing how the production handled the process of levitating actors. Those looking for details on design can peek at the brief Creating Life, while characters and setting get their due in Claustrophobic Terror.

A few in-character clips show up in Astronaut Stories. More development happens here than in the movie itself. A selection of six deleted scenes run under six minutes.

Despite some star power, Life is a rudimentary spaceship-and-alien thriller with appallingly stupid scientists and lackluster chills.

The 15 unaltered images below represent the Blu-ray. For an additional 14 Life screenshots, early access to all screens (plus the 6,000+ already in our library), exclusive UHD reviews, and more, support us on Patreon.