Academy Award winners Peter O’Toole and Sophia Loren headline this polarizing Arthur Hiller adaptation of the hit Broadway musical. Released in 1972, seven years after the musical made its award-winning debut, Man of La Mancha’s screenplay follows the stage production fairly closely with just a few songs getting the ax. Featuring an Oscar-nominated score with the classic “The Impossible Dream,” this is an uneven musical experience that may stick too closely to the stage’s conception of the musical. Loren and O’Toole are fantastic dramatic actors but their unpolished singing skills are pushed to the limit in this unimaginative cinematic musical.

Jailed during the Spanish Inquisition for offending the church, author Miguel de Cervantes (Peter O’Toole) is to act out one of his manuscripts for the entertainment of fellow prisoners. Cervantes delivers a lively performance as the legendary Don Quixote, the chivalrous knight whose choice is to see life as it should be, not its mundane reality. It takes him into battles with an imaginary foe as he tilts at windmills and into a romance with the ravishing Dulcinea (Sophia Loren).

This musical version of Don Quixote is framed by an incident allegedly from the life of its author, Miguel de Cervantes. Don Quixote is the mad, aging nobleman who embarrasses his respectable family with strange adventures. Backed by his faithful sidekick Sancho Panza (James Coco), he duels windmills and defends his perfect lady Dulcinea from the hordes of men that besmirch her honor. In reality Dulcinea is actually a whore named Aldonza, mystified by Quixote’s intentions.

Fans of the musical should enjoy it by default

Lavishly produced and hewing closely to the Tony-winning Broadway musical, something went wrong along the way in this filmed version. Some have questioned Man of La Mancha’s casting despite its strong Hollywood pedigree. Sophia Loren is absolutely beautiful as the downtrodden Aldonza, dolled up in a tight bodice that leaves little to the imagination. However, she’s poorly matched up with Peter O’Toole. The legendary actor doesn’t deliver a poor performance per se, but his chemistry with Loren is lacking. Their singing is tolerable but workman-like at best, delivering uninspiring renditions.

This film adaptation of Man of La Mancha definitely has its supporters and there is a certain lively energy to several of the set-pieces. Fans of the musical should enjoy it by default. It’s not the best work by either Loren or O’Toole, so fans of those actors will find it hit or miss. A musical adventure with fun, engaging songs, Man of La Mancha will be a love it-or-hate it experience for most people. James Coco, Harry Andrews, and John Castle also star in this adaptation of the Tony award-winning Broadway smash. 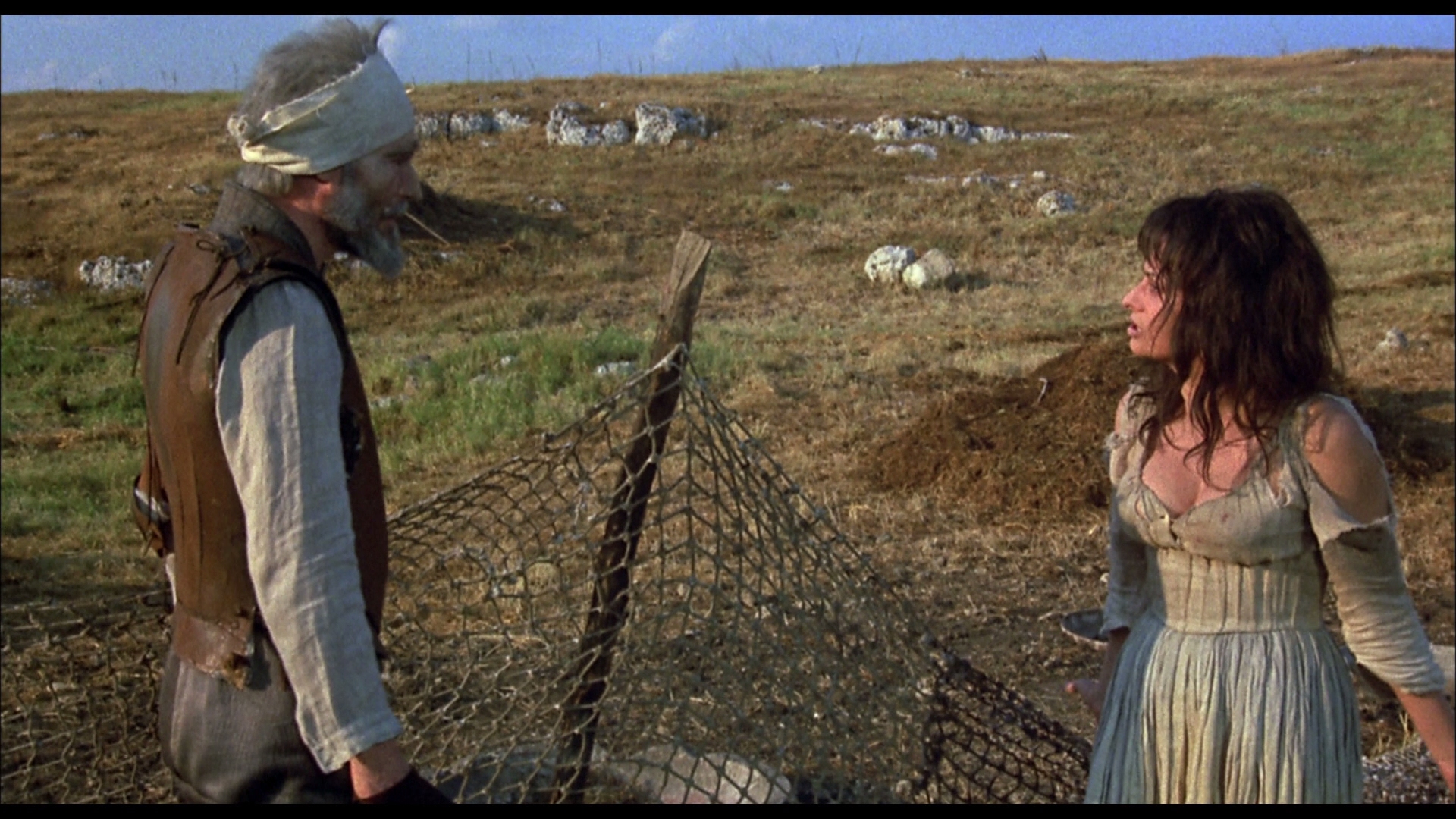 Shout Factory has licensed this musical from MGM, likely using their extant HD transfer. The 1972 Arthur Hiller-directed musical gets an older HD transfer from serviceable film elements. Murky shadow delineation and soft grain reproduction mark this 1.85:1 presentation. While lacking the dramatic improvement in clarity of some discs, this is definitely a step up in picture quality from DVD. The main feature runs 129 minutes.

Its definition and clarity are what we’ve come to expect from an older MGM film that hasn’t seen the benefit of a new restoration. Shout Factory encodes it in perfect AVC on a BD-50, averaging over 30 Mbps. A trace of ringing is visible. The video is free of overt damage and wear, though better fine detail is limited to close-ups. That possibly indicates an older telecine transfer, inferior in visible resolution to a more recent 2K scan.

A 70mm roadshow version did circulate at one point, though it has never surfaced on home video. It has been rumored that Twilight Time passed on releasing Man of La Mancha themselves, allowing Shout Factory to snag the Blu-ray rights.

The engaging musical has a satisfactory 2.0 DTS-HD MA soundtrack in stereo. Decent fidelity and an adequate stereo mix mark this audio as pleasant but unspectacular. It lacks the sonic depth and clear bass of newer productions.

The singing has fine dynamics, allowing a bit of headroom for the music to breathe without problem. This isn’t an extraordinary audiophile recording – listeners should expect a fairly normal stereo track from the early 1970s.

One should be aware that MGM’s older DVD version did have a 5.1 Dolby Digital soundtrack. That surround mix is missing on this Blu-ray.

Shout Factory digs up an older archival featurette and a couple of other small supplements for this edition. The trailer and photo montage were also included on MGM’s older DVD.

Man of La Mancha: The Impossible Dream Comes True (10:04 in upscaled HD) – Shown in its original 4:3 presentation, this vintage making-of featurette has wonderful behind-the-scenes footage of the stars on set. Watch Sophia Loren rehearsing a scene as she smokes off-camera. This featurette is a nice time capsule of how movies used to be made, exploring set design and how Arthur Hiller worked on this project.

Photo Montage With Overture Music (03:02 in HD) – A series of still photographs from the production appear as the overture music plays.

Sophia Loren and Peter O’Toole were likely miscast in this uneven Hollywood adaptation of the Broadway smash.

Click on the images below for unaltered, full resolution screen captures ripped directly from the Blu-ray. Patreon supporters see our screen shots before publication, can view our entire library in .png format, and gain access to six Man of La Mancha exclusives for as little as $1. They are perfect for custom cover art, film study, or other applications.