It’s a peculiar thing, this live action remake. Owing significant thanks to concepts and ideas in the 1991 animation masterpiece, Beauty and the Beast, through its copycat nature, feels oddly linked to Gus Van Sant’s Pscyho remake.

With awkward, distinctly theatrical staging, the Bill Condon directed version looks like a cast of known actors and actresses pantomiming in cosplay through an identical recreation. Van Sant’s Psycho felt the same, minus the cosplay.

While often gorgeous and bold and striking, celebrating Beauty and Beast feels more like celebrating the gobs of dollars that financed it. Further, the regrettable decision to digitally render Beast, trapping Dan Stevens in an otherwise fine voice performance, is held behind aging technology. ‘91’s Beauty and Beast stands as timeless; 2017’s will last until the next round of computer upgrades. It’s awkward to see. The live action invokes a mixture of magical realism and full fantasy, never settling on one, leaving side characters like Lumiere (Ewan McGreggor) grossly realistic. Talking candlesticks need never be on screen again.

Justification for this do over comes in terms of the story, making Gaston (Luke Evans) a richer villain and demanding more of Belle (Emma Watson) as she travels through unnecessary flashbacks. Without restraint, Beauty and the Beast belts out lengthier renditions of classic songs and inputs new ones that feel compulsory.

Only one song works – the opening number as Belle gleefully saunters through town. Close-minded villagers put her down, mocking her literacy. Meanwhile in reality, conservative groups sheepishly lashed out at Disney for adding a gay character. It’s as if Disney knew beforehand and staged the sequence for irony.

These expansions alleviate (partially) the vanilla fairy tale archetypes that came from Beauty and the Beast. Yet, giving flashback depth to Belle doesn’t alter this story. Animation distilled Beauty and the Beast to wise essentials; live action and special effects let it wander aimlessly. With or without depth, Belle and Beast end up in the same circumstance. Emotional cues resonate identically too.

Rather than a sentimental, romantic climax, Condon’s Beast returns the angry villagers trope to cinema. This leads to an utterly unnecessary brawl between the townsfolk and living intimate objects. Mrs Potts, once kindly voiced by Angela Lansbury, now flies around the main hall dropping scalding tea on people, Emma Thomspon excitably cheering in the role.

Endless words could dissect Beauty and the Beast at its core. The rather insidious Stockholm Syndrome at its center remains as long as the story drags itself through the ages. This Beauty and the Beast casts Belle as stronger-headed. Her decisions carry developed reasoning behind them. Subtle changes to her behavior and deeper relationship to her father imbue this version with marginalized creepiness.

As to those wondering why to watch this live action fairy tale unfold as opposed to an Oscar winner of 20 years ago, keep wondering. 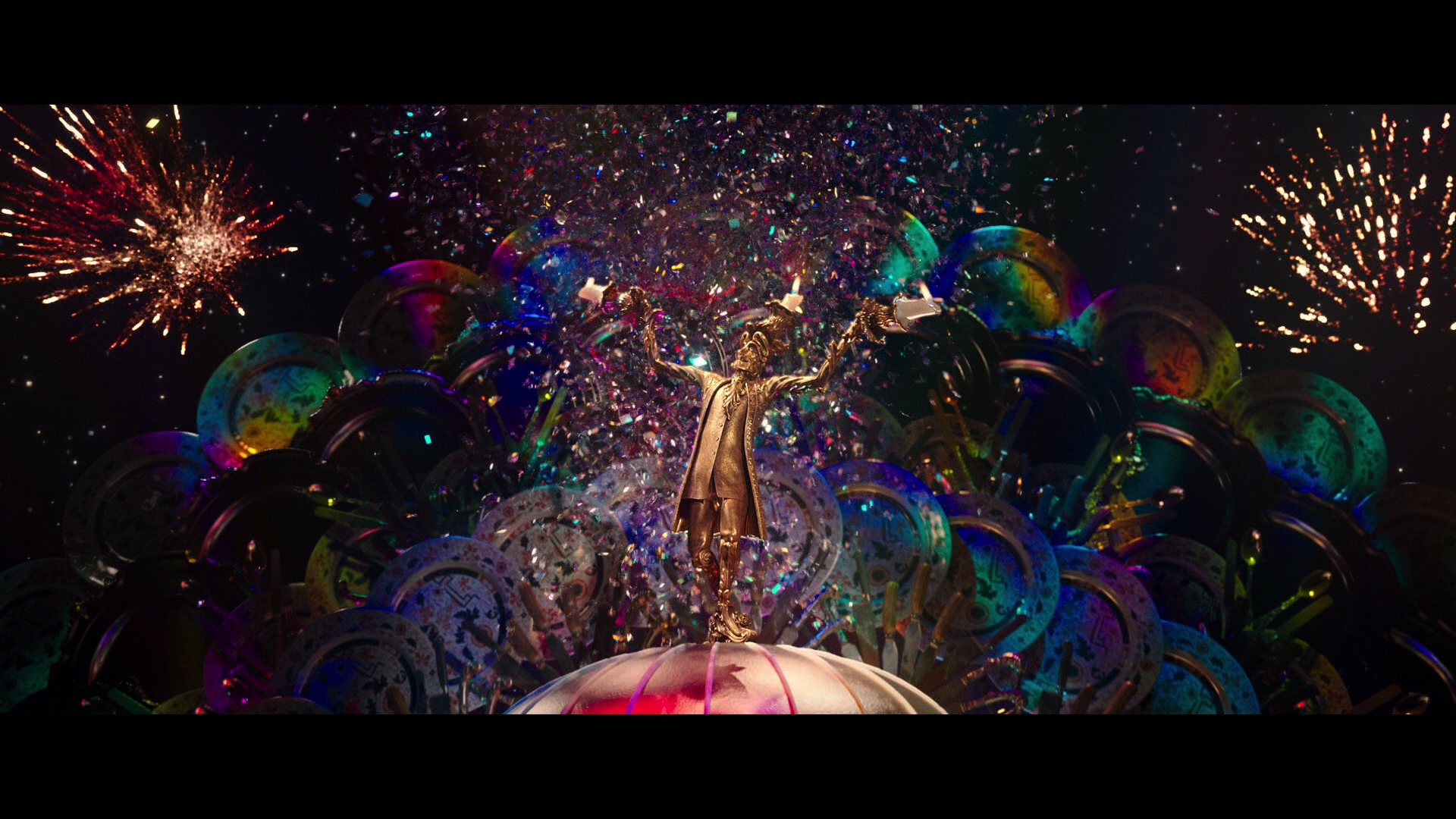 Beauty and the Beast’s battle on Blu-ray is black crush. Particularly, the Beast. Whether to save on visual effects or the chosen cinematography style, crush blotches out most shadow detail. The same goes for elsewhere too, including the castle scenery. Crush comes in all forms.

Luckily, most everything else shines like a $200 million Hollywood production. Color excels, livening the imagery through saturation. A few off flesh tones leaning toward magenta notwithstanding, color grading frequently lends itself to a bright animated appearance. Primaries rarely subside, and the deep blues emphasizing dramatic moments still look stunning.

Bold resolution allows for exceptional definition, imperative when it comes to the incredible costume work. The jewels on Belle’s iconic yellow dress visibly show, even at distance. Stitching on Beast’s jacket reveals itself sans aliasing or flicker. The same for Beast’s fur.

The digital nature of Beast introduces small bouts of noise. His blue jacket invites it. A few other stray instances (right after the ballroom dance specifically) stand out, but those are anomalies. Generally, the digital cinematography bears no substantial fault.

So much swirling. Beauty and the Beast sends items panning around the full width of its DTS-HD 7.1 mix with frequency. Belle receiving her first dress swooshes and moves. Wolves pan about the soundstage and the echo of the castle walls carries through into the rears. Thunder clashes in the fronts and quickly reverbs into the rears.

Song sequences vibrantly spread across the available channels, filling and moving with superb accuracy. Voices travel between the front speakers as things take off, a common occurrence even with dialog. Before Beast’s first appearance, his shouts fill in the rears specifically.

It’s not complete with low-end support, throbbing with each step from Beast or his sizable roars. Within the musical numbers, bass adds pleasant kick. During the finale, the castle crumbles, rocks falling with deep LFE support.

Scenes from an elaborate table read show how excessive this entire production was, including full dance numbers as the cast read. It’s ridiculous and 13-minutes long. The core making of is named Beauty of the Tale, rather general but the level of detail involved in making the film (including superlative sets) make it a worthwhile 27-minutes. The Women Behind Beauty and the Beast is a wonderful look at the key players behind-the-scenes who played important roles. Strong stuff.

From Song to Screen digs into the design of the musical numbers (four of them anyway) for 13-minutes total. Note you can also view the movie with a lyrics track. Nine deleted scenes plus an extended song offer minor bits and pieces. Celine Dion speaks personally in a short three minute interview about her involvement. Finally, a music video and a making of the video round off the bonuses.

Glamorous and overly expensive, Disney’s live action Beauty and the Beast fails to captivate the same as the animated original.

Click on the images below for unaltered, full resolution screen captures taken directly from the Blu-ray. Patreon supporters see our screen shots first, view our entire library in .png format, and gain fast access to 27 Beauty and the Beast exclusives for as little as $1, perfect for custom cover art, film study, or other applications.