As traditional network television continues its rapid decline, new platforms open up all the time with exciting new content. Few have heard about The CW’s online streaming platform, CW Seed. It hosted two seasons of an exclusive animated series about Vixen starting in 2015. Vixen is the DC Comics’ female superhero able to summon the power of spirit animals using an African totem. She has even been a member of the Justice League and popular enough to receive a toy edition.

Having been around in some form since 1981, Vixen made appearances before in various mediums, including memorable showings in Bruce Timm’s classic Justice League Unlimited. Serving as a precursor to her introduction on The CW’s Arrow, CW Seed’s Vixen animated series featured guest appearances by several characters from both Arrow and The Flash.

Firmly set in producer Greg Berlanti’s burgeoning television superhero empire affectionately known as the Arrowverse to fans, Vixen: The Movie combines the first two seasons of the digital series into a single movie. The Arrowverse includes such ongoing series as The Flash, Arrow, Supergirl and DC’s Legends of Tomorrow. Acting as many viewers’ introduction to the superhero Vixen, the movie plays out like Vixen: Year One for long-time comic book fans. Fifteen minutes of all-new content pad the animated feature out to 74 fun minutes.

This is straightforward, direct superhero storytelling that plays it safe. Vixen: The Movie introduces Mari McCabe, a young woman living in Detroit. Raised in foster care from a young age, she’s mostly unaware of her family’s background. Mari is a struggling fashion designer whose life is changed forever when she discovers that her necklace, a family heirloom from her African mother, can channel the powers of various animals. It enables her to have such powers as the strength of an elephant and the speed of a cheetah when needed. She can summon the powers of any animal on Earth. Adopting the costumed identity of Vixen, she fights crime in Detroit.

Her foster father Chuck is there to provide some perspective on her new powers but can only offer so much guidance. Mari will have to find out more about the totem’s origins in Africa, where her family hails from in the fictional country of Zambesi.

Long story short, Green Arrow and the Flash catch wind of a new superhero in Detroit and go to meet Mari. In typical superhero fashion, a perfectly avoidable battle ensues. After figuring things out, the heroes become allies.

If there are hiccups in Vixen: The Movie, the remnants of its original episodic structure leave their mark on the narrative. Several different writers were used to write the individual digital episodes, leaving some scenes smoother than others. There is the odd handling of one character, an African studies professor Mari contacts early in the movie. Introduced as a villain, the professor practically becomes a friendly love interest near the end. Without spoiling too much of the plot, Vixen’s primary antagonist is callously treated. The plot never gets a good grasp on the character, changing the villain’s personality on the fly to suit the plot’s whims without much thought.

Vixen: The Movie is definitely a neat time if you keep up with superhero shows like Arrow and The Flash. Bringing in most of the key characters from those shows with their actual actors voicing them, this is a solid introduction to Vixen. A post-credits scene actually leads directly into Vixen’s first appearance on Arrow, back in last year’s season four. So this movie is part of the Arrowverse’s continuity for those hardcore fans that must see everything. 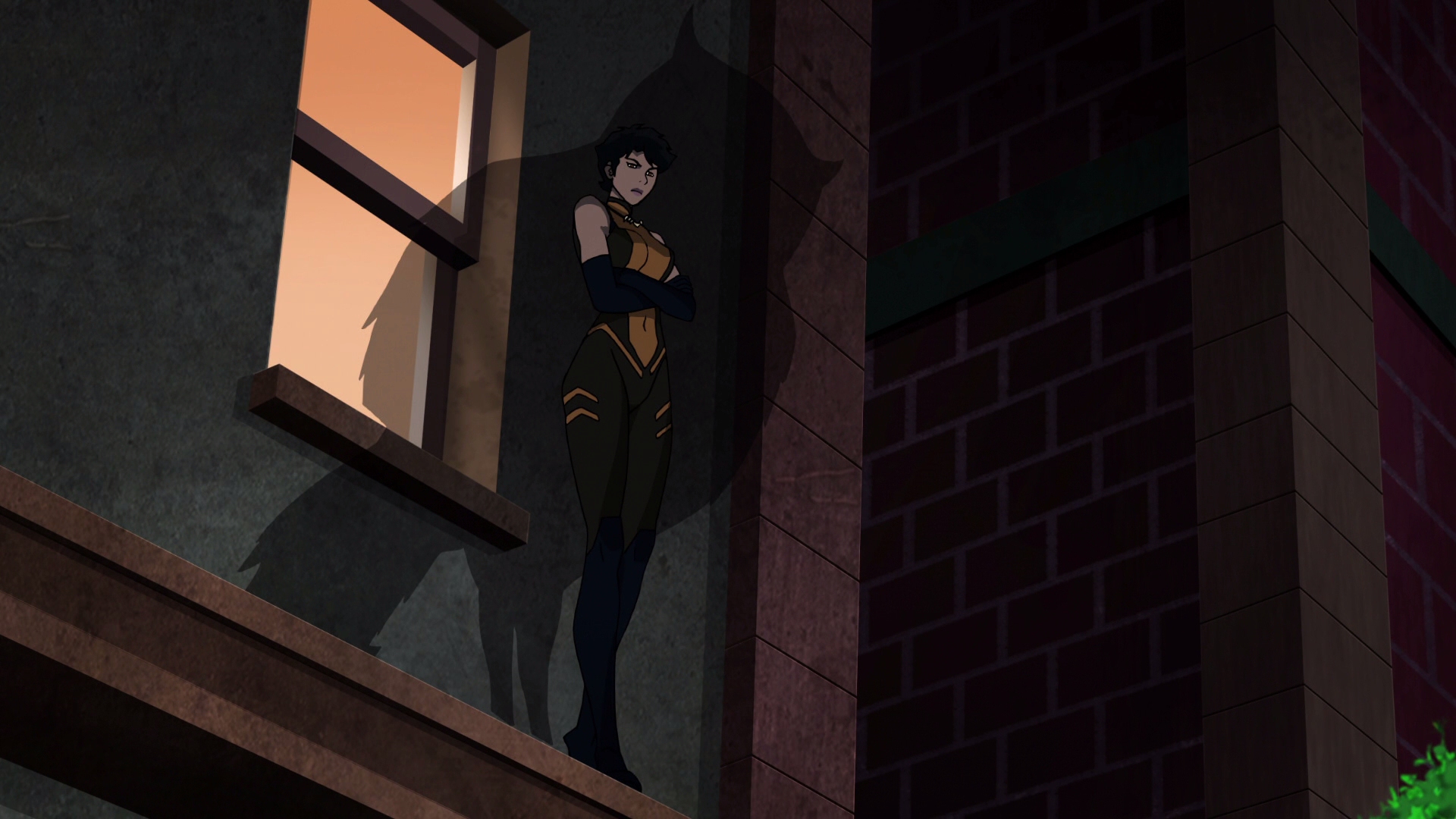 Warner Bros. distributes Vixen: The Movie in a satisfying but imperfect Blu-ray presentation. Produced by James Tucker, a veteran animation producer that handled many of DC’s recent animated features, this video isn’t that far removed from recent releases such as Batman: Bad Blood or Justice League Vs. Teen Titans. The 1080P video was rendered at that same 1080P resolution, ensuring fairly smooth animation with bright colors. It’s a touch less sophisticated in fluidity, motion and line-work than those other DC productions, closer to the efforts seen on television fare.

The AVC video encode isn’t a great job, averaging a sub-par 15 Mbps on a BD-25. Some banding and posterization are evident in the bright color palette. The animation needed more dithering to ensure a perfect presentation without these artifacts. The animation itself is clean and vivid in brilliant clarity.

Employing bold primary colors with just hints of darker tones, it’s typical superhero fare. Fans should find Vixen: The Movie a pleasing but not perfect video experience. Shown in its native 1.78:1 frame, regular consumers of DC’s animated films should know what to expect.

A perfunctory 5.1 DTS-HD MA soundtrack offers intelligible dialogue and decent dynamics. Some of DC’s other recent animated features have stronger mixes and better bass. The audio design includes moderate immersion and occasional bursts of directionality. Much of the action is confined to the front soundstage. Everything in Vixen is heard in crisp, clean fidelity.

No less than eight subtitle options are included for the movie, including English SDH and a hidden Japanese option. They all display in a white font.

Vixen: The Movie arrives in a slipcase. Inside is an UltraViolet digital copy, redeemable on VUDU in HDX. Some copies will include $8 Movie Cash for the Wonder Woman movie.

Vixen: Spirit Animal (06:13 in HD) – This new featurette unlocks the secrets of Mari’s power and her past, interviewing producers and even actors Victor Garber and Carlos Valdes. This could have been longer but it does a nice job of summarizing the character for unfamiliar viewers.

Bruce Timm’s Top Picks – DC animation guru and legend Bruce Timm picked out these two episodes of Justice League Unlimited, both of which include Vixen. Still considered one of the best DC shows of all time, these are great episodes. Most will consider them finer entertainment than the Vixen movie itself. It was this series that introduced many fans to Vixen for the first time outside of comic books.

Vixen’s introduction to the Arrowverse is aided by appearances from the Flash and Green Arrow.

Click on the images below for unaltered, full resolution screen captures ripped directly from the Blu-ray. Patreon supporters see our screen shots before publication, can view our entire library in .png format, and gain access to seven Vixen exclusives for as little as $1. They are perfect for custom cover art, film study, or other applications.