From the same team behind 2015’s successful adaptation of Agatha Christie’s And Then There Were None comes a brilliantly grim murder mystery set in the 1920s, devastating in its conclusion. The sublime morality play found in The Witness For The Prosecution takes an alternate path from prior film and stage adaptations, this time using Agatha Christie’s original short story for inspiration.

Tautly scripted and charged with a dark atmosphere unusual for period mysteries, it’s a brilliant adaptation that will make your head spin with its twists and turns. Deviously plotted, Christie’s powerful story remains thrilling entertainment in this new form.

Leonard insists that an enigmatic chorus girl from Austria can prove his innocence. Having survived the horrors of World War I together, Romaine (Andrea Riseborough) lives with Vole in London. Solicitor John Mayhew (Toby Jones) sees a bit of his own deceased son in Leonard, agreeing to defend him from the murder charges. A romantic at heart, Mayhew is a good man hoping justice is served.

Toby Jones gives a wonderful performance as the earnest lawyer

As the scandalous crime goes to trial, solicitor John Mayhew finds that the case may be his own undoing. Caught in a loveless marriage and suffering terribly from some disease he steadfastly ignores, Mayhew believes in his client’s innocence and willing to sacrifice everything to free Vole.

Writer Sarah Phelps perfectly cast the London setting in the bleak aftermath of World War I, which informs the class divide at the heart of The Witness For The Prosecution. Vole is only drawn into French’s socialite world looking for a small job, desperate for some paying work. Emily French is oblivious to Vole’s impoverished world, insulated by her wealth as a heiress. Janet McIntyre is her somewhat jealous maid, a possessive woman that views the lower class Vole as a threat to French’s household.

The Witness For The Prosecution is an atmospheric mystery with stunning twists and turns. Superbly cast with a host of popular BBC actors, the rich emotional drama inherent to its characters works beyond the expected mystery. As we learn more about Leonard Vole and the mysterious Romaine Heilger, Mayhew gets more and more emotionally involved in a case that may cost him his life. Toby Jones gives a wonderful performance as the earnest lawyer, fighting for his client’s life. His Mayhew is the real heart of the film, a genuinely involving character you can’t help but root for as we learn more about his sad life. 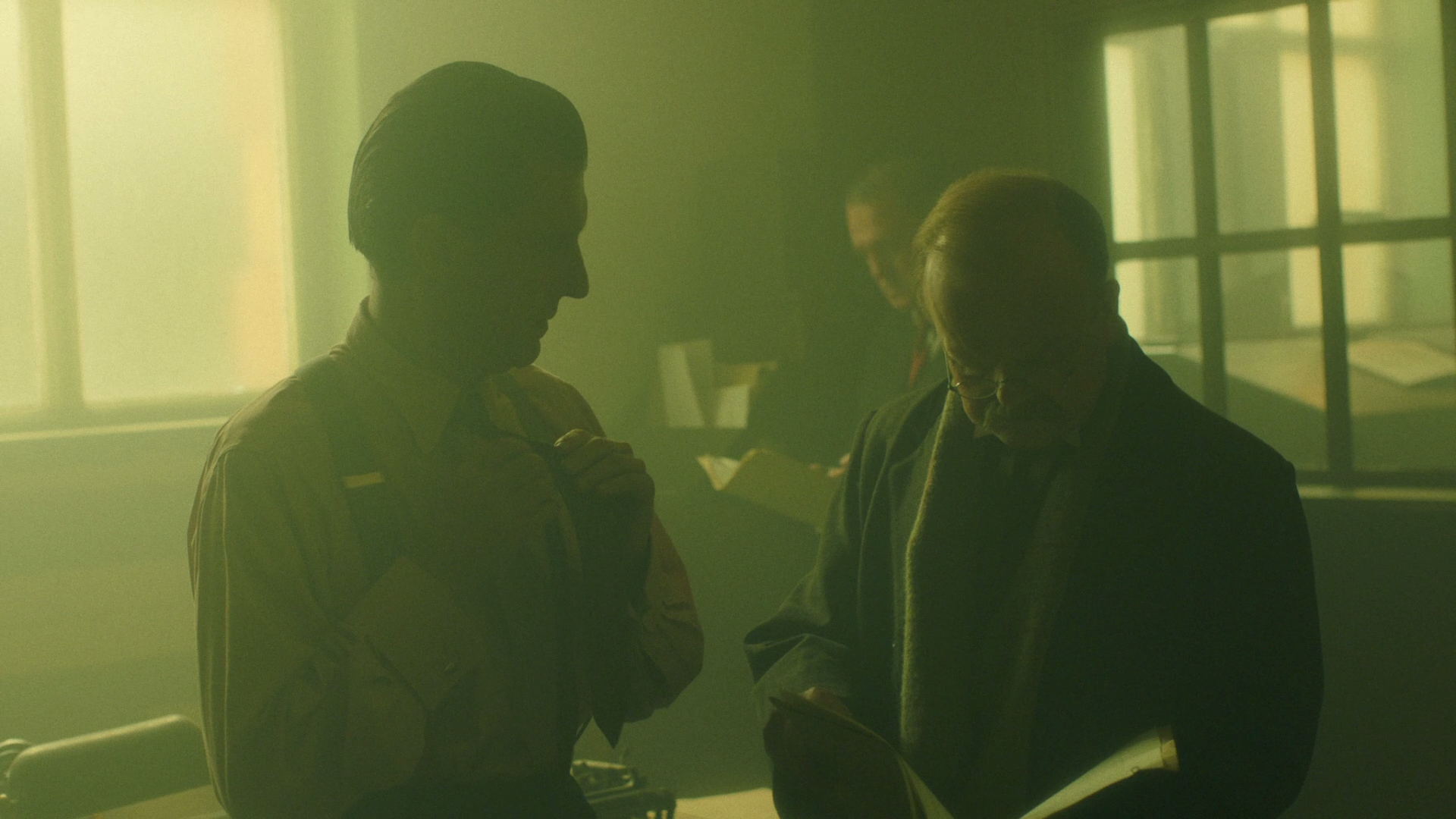 Director Julian Jarrold and his cinematographer have chosen a dreary, almost ugly aesthetic for their period mystery set in a post-war London. This is not a good-looking production. The picture quality is murky at best with a dingy color palette.

It all seems to be intentional, almost resembling an older film shot in the 1970s. Acorn Media gives the main feature a serviceable presentation, albeit with minor compression problems. The 122-minute main feature is encoded in fairly erratic AVC on a BD-50. The 1.78:1 video contains some banding and a few bouts of ugly chroma noise.

The soft-focus cinematography produces grainy clarity, weak in sharp definition. I was amazed to discover it was a digital production, which is obscured by creative choices. Some detail is lost with somewhat questionable shadow delineation. The Witness For The Prosecution wasn’t filmed with beautiful video in mind and its moody cinematography is fairly reflected on this BD. Acorn Media can’t really be blamed for how this mystery looks in HD.

The 5.1 DTS-HD MA soundtrack has an understated, minimal score with occasional ambient cues in the surround channels. A few scenes get a bigger soundstage with more audio elements, but it’s largely a dialogue-driven drama without the need for splashy sound design. Dialogue is cleanly heard with fine separation in the front channels.

Acorn Media provides a slipcover for the single-disc release. This is a substantial set of behind-the-scenes special features, interviewing everyone from writer Sarah Phelps to producers and most cast members. The answers generally go beyond the normal EPK fluff often heard in these kind of shorter featurettes. All of them come in crisp HD quality. Some of the actors are even in costume when being interviewed.

– From Page to Screen: Bringing Witness to Life (24:15 in HD) – The primary supplement is a nice behind-the-scenes documentary with cast and crew discussing the difference between the first film adaptation and this production.
– Postwar Fashion: The World of Witness (11:17 in HD)
– Anatomy of Murder (2:34 in HD)
– What Makes Christie Resonate Today? (8:23 in HD)
– Filming on the Front: When the Somme Came to Liverpool (9:50 in HD)
– Sarah Phelps’s WWI Story (1:41 in HD)
– The Cast on Agatha Christie (2:34 in HD)

Full disclosure: This disc was provided to us for review. This has not influenced DoBlu’s editorial process. For information on how we handle review material, please visit our about us page to learn more.

Click on the images below for unaltered, full resolution screen captures ripped directly from the Blu-ray. Patreon supporters see our screen shots before publication, can view our entire library in .png format, and gain access to nine Witness exclusives for as little as $1. They are perfect for custom cover art, film study, or other applications.