In one film, Underworld never held enough narrative that it needed a fifth sequel in Blood Wars. Indifferent and unnecessary come to mind in reference to this follow-up, coming some 15 years beyond the original. The tiresome exposition, the constant flashbacks, dropped storylines, and menial character development doesn’t do much for Underworld as a whole.

In an Underworld first, a female director steps behind the camera. Anna Foerster though works with little directorial improvisation. Traditionally a director of television, Foerster’s Blood Wars feels like an extension of her previous work. By budget, in style, and because of the meandering script, Blood Wars’ listless energy projects the feeling of a filler episode. One-off villains neither energize or empower the series.

Blood Wars needs to keep the conflict between vampires and werewolves going for a fifth time, and barely finds enough reason. Selene’s (Kate Beckinsale) daughter, introduced in the prior Underworld: Awakening, sets off this chapter – then disappears. There’s the “wrongly accused Selene” storyline. That disappears too.

Blood Wars is a studio sequel with no momentum behind it

Instead, on both sides of the war, there’s a fight over control. For vampires, it’s Semira (Laura Pulver). If Blood Wars has a positive, it’s her, giving a corny if devilish fairy tale-esque villainess, topped by outlandish outfits. For Lycans, they have Marius (Tobias Menzies), brutish and bland with no potential range. He snarls and transforms by way of computer, linked into the lore via a hasty screenwriting trick.

By now, the form and style of Underworld has faded into a familiar pattern of shadowy fights and improbable leather costumes. Near its closure, Blood Wars nears complete parody of itself, two combatants trading machine gun fire at point blank range, a number of those shots never reaching their target. Earlier, a hero cannot hit two Lycans preparing to fire a cannon, despite the editing suggesting they’re across a small hallway. It’s all an excuse to put more bullets on screen in a film suffering from a dearth of action.

The final tally of Blood Wars is that of waste – waste of visual effects, waste of opportunity, and waste of, well, the rest. Blood Wars is a studio sequel with no momentum behind it or urgency to exist, churned out like one of the Resident Evil follow-ups. Coincidentally, a late twist in Blood Wars echoes Resident Evil. Each sequel – in either franchise – is indifferent from the next, and played side-by-side, utterly indistinguishable. At least the original Underworld offered a spark. 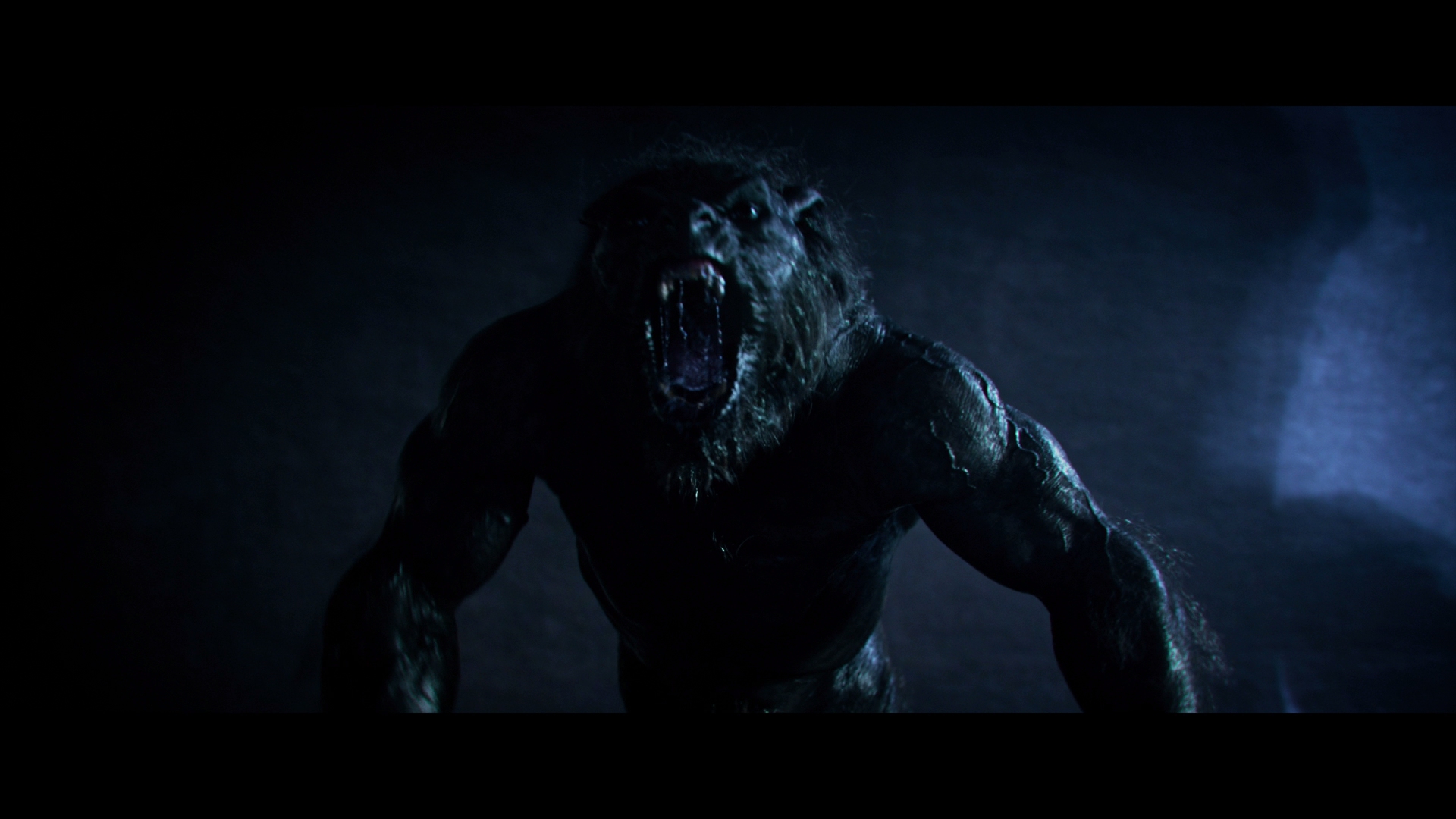 Oh dear. Blood Wars lacks any contrast. It’s a disc so dark, my TV dimmed three times as it sensed inactivity. While light sources inside of a vampire coven understandably number in the few, Blood Wars doesn’t even light when the sun rises. HDR effects completely fail this disc. If anything, they mute light into a tepid gray.

Underworld’s visual flair uses extensive shadows and crush, unchanged here. However, this is the worst of the series to date. The entire screen feels swallowed by darkness, sapping any detail along with it. Although granted a 2K master, good luck discovering any benefit of this resolution.

Likewise, the blue-ish tint of Underworld returns, although here, quite dim, even flat. There’s no zest to the monochrome palette, undoubtedly caused by the pitiful contrast. Images pass by too muted and environmental definition lost to all of the above problems.

Watch Blood Wars on Blu-ray. In every aspect, the 1080p presentation bests the 4K one and it’s not even close. The image is brighter, stronger, and more saturated. Contrast – actual contrast – is evident. Light sources offer energy to the film, allowing definition to show through. Close-ups deliver firm detail, and environments appear sharper.

Oddly, despite the purported benefits of HDR, both color saturation and shadow details best those displayed on the new format. That’s not on HDR tech – just awful mastering in this bizarre case from a typically consistent Sony. Compare as Thomas (Charles Dance) steps into a room to investigate a murder. His cloak on UHD? Crushed into all black. On Blu-ray? Still crushed, yet with additional detail. Little is lost to the series’ usually heavy cinematography and post-production styling.

Catch-22: Sony again senselessly handicaps the Blu-ray with a DTS-HD 5.1 mix while the UHD sports Atmos. Your Blood Wars viewing choice depends on your status of audio or videophile.

From the start, Selene comes under attack from Lycan forces. Their chains split the soundfield wonderfully, delivering superlative directionality. Wide punches sweep between channels and gunfire heartily hits the low-end; plenty of examples exist for each.

Blood Wars likes to crowd rooms with action, often allowing a bit of reverb to each punch or gunshot. A training session midway through, although virtual, nicely pans objects and ups the activity level. It’s a fine preview of the dense finale to come, filling a main hall of a vampire coven with werewolves, letting the two species work each other other. Wide spreads of gunfire and tremendously powerful gunfire highlight this stellar sequence.

Better still, this is the first Underworld not to crush its audio under the weight of a throbbing, electronic soundtrack.

Thankfully, you won’t have to navigate Sony’s ‘90s era, DVD-esque UHD menus for the bonuses. Everything exists on the Blu-ray. First is Evolution of Selene, eight minutes of Beckinsale discussing her character and how she’s evolved. Old and New Blood follows, a six minute look at the story and concept of this sequel. For another six minutes, The Evil Evolved spends time with the villains. A bit richer than the rest, Building a Blood War peers in on the director, production design, and other elements for 12-minutes. A graphic novel comes up last.

Five of these movies is clearly too many as the tired, useless, and dull Underworld: Blood Wars proves.

Click on the images below for unaltered, full resolution screen captures taken directly from the Blu-ray. Patreon supporters see our screen shots first, view our entire library in .png format, and gain fast access to 14 Underworld Blood Wars exclusives for as little as $1, perfect for custom cover art, film study, or other applications.