Removed from the scripting pressures and fervor over Harry Potter, this prequel, even if unnecessary, finds a sharp voice. Inundated with social commentary – of the period and otherwise – Fantastic Beasts makes the most of its characters while visual effects plaster the screen with creature antics. It’s too long, and good as they may be, those effects pad the length. However, the emotional core is enough to see Fantastic Beasts through.

Read our full review of Fantastic Beasts for more.

Color is the biggest boost to the UHD presentation. Compare Newt’s overcoat. On Blu-ray, the coat is a murky gray/blue. On UHD, that changes to a near turquoise and it’s quite a stunning color. There’s a glow not evident on the prior format. Flesh tones appear less peaked, and saturation is, all around, a touch brighter. Fantastic Beasts is infinitely more attractive here, and not in terms of general resolution.

If there’s a fault, it’s noise. Skip to the zoo sequence and watch the blocking appear. While not a pervasive issue (it is on the Blu-ray), there’s a distracting quality to the digital cinematography. The loss of a clarity is a bummer.

Opening with wonderful digital clarity, things quickly look up for Fantastic Beasts. The softened, vintage color palette brings out a slew of chalky hues, with a touch of cooling blues. Grand shots of late 1920s New York excel with their detail. Close-ups produce necessary texture, and costumes, full of wool and other thick fabrics, pile on fidelity.

And then it all sort of dies, wasting into a pile of noise. It’s odd for a big production to fall away into this much digital-ness. Fantastic Beasts buzzes in nearly every scene, choking the images with little help from Warner’s encode – or is this all Warner’s encode?

The question isn’t unreasonable given the studio’s history, even if Warner stepped up in recent years. This is another collapse though. Other problems slip into the mix too. Black crush is maddening throughout. Black coats and other darker clothing recede into infinite shadows. Forget finding detail in those. Thankfully, the crush is a reprieve from the noise.

Detail remains. Close-ups still render definition and visual effects astound. Maybe part of this is on the visual effects, although theatrically, Fantastic Beasts wasn’t this hampered by artifacts of all kinds.

Luckily, although still burdened by the above issues, 3D work is marvelous. It’s a rarity anymore when a blockbuster chooses to take such an aggressive stance with the format. Opening scenes prove striking. As Newt stands at the immigration desk, the distance, designed to show the officer as an imposing figure, comes enhanced by the format. Depth and foreground-aware cinematography ensure consistent dimension, free of problems.

When creatures begin appearing and magic starts firing, things become better yet. Spells linger in the air, while critters perform hokey (if spectacular) tricks for the 3D presentation. Fall in and pop-out scenery both excel, and in sizable numbers. 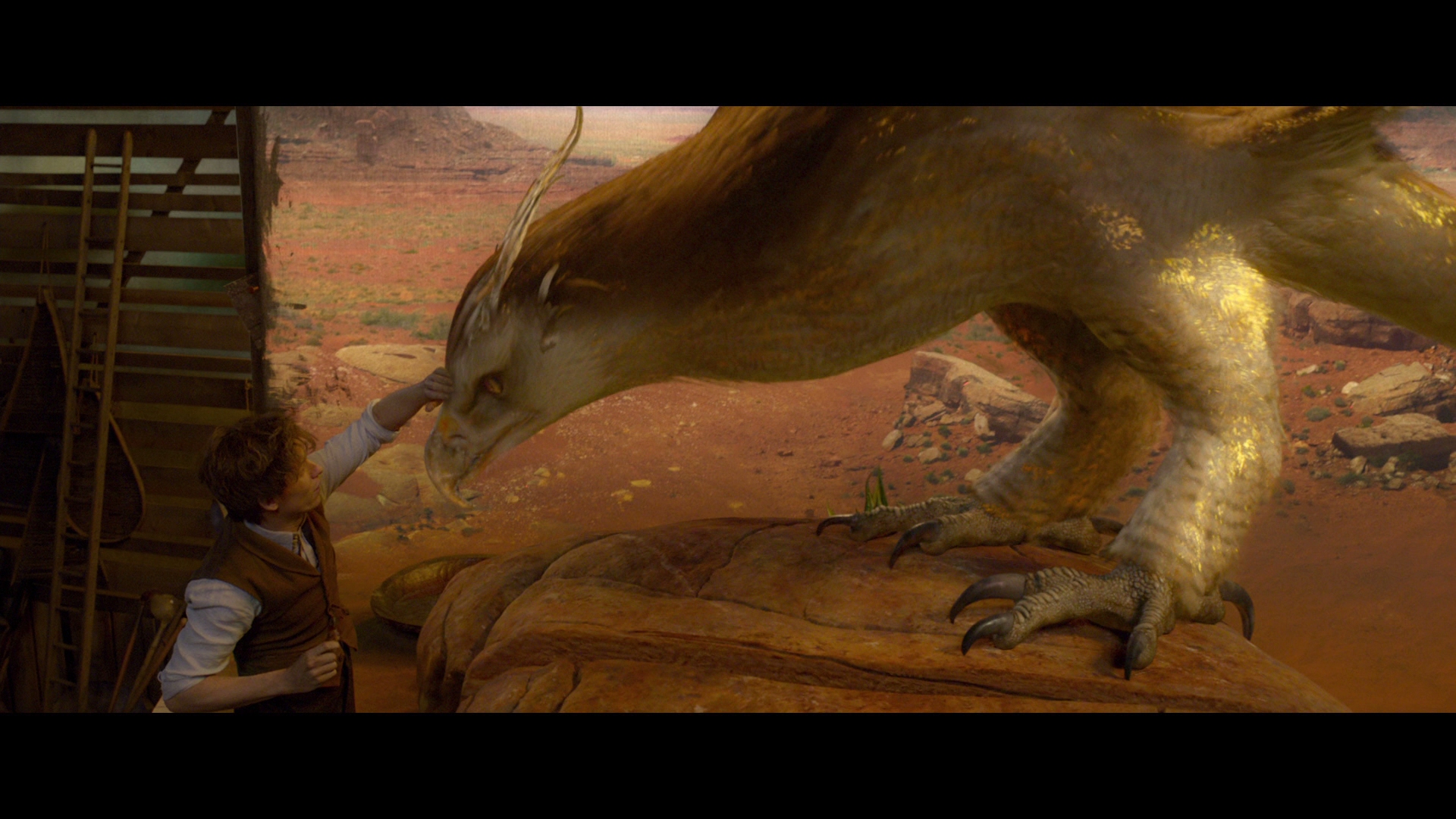 An oddity, this one is. In 3D, the disc limits itself to DTS-HD 5.1. In 2D (both UHD and Blu-ray), Dolby Atmos/TrueHD 7.1. Why the limitation? Great question without an answer. The fuller, richer track in 2D is undoubtedly the way to go. It’s sensational work, enveloping and bold with awesome dynamic range. Constant sweeping effects allow the mix to show off with regularity. Having a slew of flying, dashing monsters darting around (and out of) the frame provides the opportunity.

Crumbling buildings and cast spells rock the low-end, almost any of the action scenes worthy of replaying. The personal favorite is the snake monster in the stock room, destroying the space with superb subwoofer extensions while slithering around in a near constant 360 degrees.

No doubt the DTS-HD mix feels rather empty, as if space is missing. It is, obviously, even without hearing the Atmos offering. Still, the same material applies, a great track for the format.

Bonuses lean primarily on the weight of JK Rowling’s world, beginning with Before Harry Potter. In 15-minutes, Rowling and company perform an admirable marketing job in selling the idea of this prequel story. Eleven deleted scenes (14:33 total) host a few gems, including Kowalski’s break-up with his fiance in the early going. The next three sections focus on characters, design, and creatures, obnoxiously split into short featurettes (no more than six minutes each, usually four) and without play all options. While typically dry, some great art is evident via some pre-production art, but the rest is skippable sadly.

Click on the images below for unaltered, full resolution screen captures taken directly from the Blu-ray. Patreon supporters see our screen shots first, view our entire library in .png format, and gain fast access to 22 Fantastic Beasts exclusives for as little as $1, perfect for custom cover art, film study, or other applications.