Silence is a personal film for Martin Scorsese. Adapted from the 1966 novel by Shusaku Endo, its serious religious themes of faith and suffering beckoned the great director for almost thirty years before finally getting made. Everything came together for the auteur on Silence in 2016, finally getting a grasp on the project after all these years. A fictionalized account of actual Christian history in Japan, Silence is Scorsese’s most passionate filmmaking in decades. This is a thoughtful and contemplative meditation on the Christian faith under intense persecution, as its believers were violently suppressed in Japan for centuries.

Silence is a careful examination of the difference between religion and faith in the face of overwhelming hardship. Its story is a harrowing account of Jesuit missionaries in 17th Century Japan, after Christianity has been outlawed by the Japanese government. Andrew Garfield and Adam Driver star in this compelling testament to faith and endurance, aided by Liam Neeson in a critical supporting role. Two young Jesuit priests go looking for their mentor in Japan, facing brutal persecution. Their faith will be severely tested as they hide from the authorities, secretly spreading Christianity in tiny Japanese villages.

The movie opens in 1633 Japan as Portuguese Father Ferreira’s (Liam Neeson) last known letter is being read back home. Father Rodrigues (Andrew Garfield) and Father Garupe (Adam Driver) listen to their mentor Ferrerira’s letter. The pair don’t believe the revelations they’ve heard about Ferreira living in Japan. It is said he has become an apostate, having denounced Christianity and taken a Japanese wife.

The two young Jesuits don’t believe the accusations about Ferrerira, a pious Christian they once personally knew and deeply admired. They journey to Japan hoping to clear his good name, full of youthful hope and idealism. Their Christian faith will be tested again and again as they confront the Buddhist forces wanting to purge Christians and all trace of Christianity from Japan.

Christianity briefly flourished in Japan in the mid-16th Century before Buddhist forces drove it nearly to extinction in the island nation. Christianity first arrived in Japan in 1549, when the Jesuit missionary Francis Xavier landed in Kagoshima. By 1614, the government of Japan had banned the faith. It was said that no Catholic priest survived in Japan past 1640. The Japanese ban on Christianity would not be lifted until 1873.

Churches under the ban were destroyed without remorse, and Christians in Japan after the ban faced incredibly harsh treatment. Some Christians were sent into exile, forbidden from ever returning. Others were martyred with public executions, often refusing to renounce their faith despite being severely tortured. The lucky few were allowed to live if they became apostates, publicly denouncing their faith in humiliating ceremonies. Silence deals with all these issues in explicit detail, opening with a graphic scene of beheaded Catholic priests.

Faced with severe mental and physical torture for their religious beliefs, Christians in Japan went underground and practiced their faith in secret. It is in this environment that Rodrigues and Garupe land in Japan, smuggled into the country by a wayward Japanese Christian named Kichijiro (Yosuke Kubozuka). Having been years since they saw a priest, the remaining Japanese Christians are overwhelmed with joy meeting the two priests. It had been many years since the villagers had given confession or received any of the sacraments.

The two priests’ plight becomes increasingly desperate in Japan, forced to hide in silence during the day from authorities looking for any Christians. A huge price is put on the head of any surviving priest, so they must live in constant fear of being caught and executed.

Having heard rumors of his existence from villagers, Father Ferreira does finally make an appearance deep into the film. Without giving anything away, Ferreira is an important figure that provides Silence’s religious punch-line. Father Rodrigues gets a new understanding of his own faith once he learns more about his mentor’s situation.

Scorsese deliberately paces Silence’s methodical storytelling. Running nearly three hours, it’s a draining emotional journey that explores Christian faith and what it means to be a believer in these difficult circumstances. This is richly rewarding cinema that requires some patience. A deeply intimate exploration of Christian missionary work in the face of overwhelming persecution, Silence is a masterpiece laying out that crucible of faith.

Andrew Garfield is asked to carry Silence’s hefty metaphysical weight on his own, looking haggard and thin. This is far removed from his days as Spider-Man. It’s the most compelling work of the British actor’s career, a role with flashes of brilliance if you can possibly ignore his mildly inconsistent accent. His narration could be improved if I wanted to be petty, but it’s a small complaint.

Silence is Scorsese’s most moving film in years, worthy of serious Oscar consideration. The religious film’s characters are meticulously crafted, intricately revealing their inner beliefs as men of conscience and faith. The priests’ belief in their faith isn’t always rewarded in this hostile land. It’s a sober telling of the struggle these missionaries faced without embellishing the truth.

Silence’s emotional power and principled characterizations makes it Scorsese’s most accomplished film since Goodfellas and one that should become a favorite over the coming years. This isn’t the glossy, easy storytelling of his earlier classics. It’s a serious piece of heavyweight filmmaking made for the master director’s own personal reasons, possibly his last statement on faith in his long career. Silence is a wonder of intimate personal reflection into Scorsese’s soul. 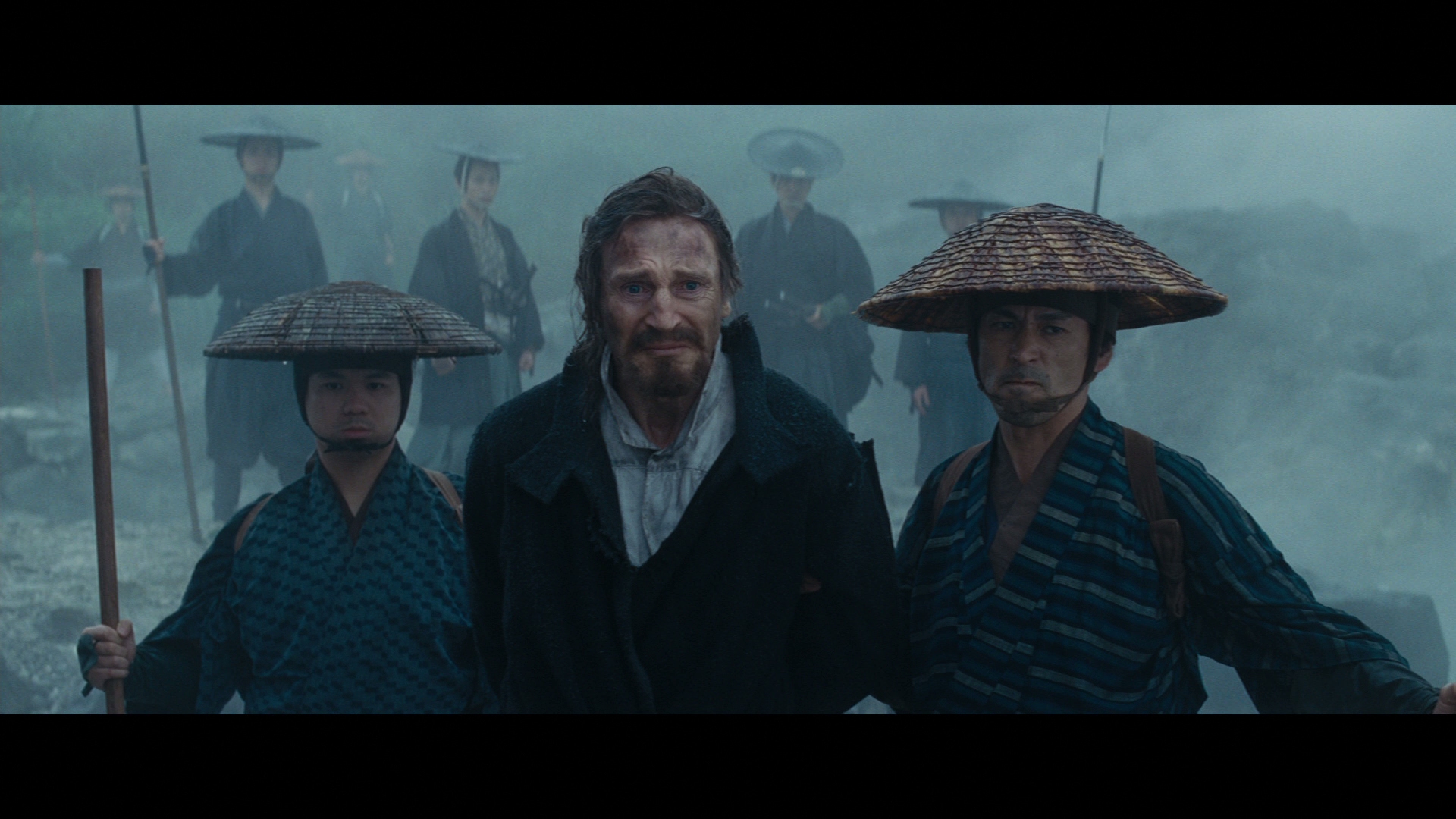 Silence is a starkly beautiful movie, impeccably lensed by noted cinematographer Rodrigo Prieto with masterful composition and mise en scene. The lush Japanese landscapes, actually shot in Taiwan, are captured with a combination of digital and film.

The 1080P video is pristine with abundant definition and extremely crisp detail. Paramount has done a fantastic job with the transfer. Silence is seen in a stunning 2.40:1 presentation, encoded in fully transparent AVC on a BD-50.

There is a progression in the film’s color palette over its 161 minutes. It starts off in cooler cyan tones and then opens up to amber, yellow and gold hues, meant to reflect the colorful art of the Edo Period in Japan’s history. This is nigh demo material perfectly represented on Blu-ray with magnificent picture quality.

The chosen 5.1 DTS-HD MA soundtrack features an atmospheric surround mix with delicate ambience. The dialogue-heavy movie offers strong sound design in several key moments, expanding the soundstage when necessary. Scenes set by the ocean include a powerful rush of waves breaking against the seashore in uncanny detail. Silence is a classy movie with top-notch production values. The audio and its mix are first-rate all the way.

Optional English, English SDH, French, and Spanish subtitles appear in a white font, remaining inside the scope presentation at all times. French and Spanish dubs in Dolby Digital are secondary options, as well as an English Descriptive Audio track.

Paramount has included a UV and iTunes digital copy for Silence. An embossed slipcover is available on early pressings. Only one special feature is included, a nicely done documentary.

Martin’s Scorsese’s Journey Into Silence (24:30 in HD) – 27 years in the making for Scorsese, Silence went through dozens of rewrites and revisions before hitting the screen. This excellent behind-the-scenes documentary has the usual cast and director interviews in the mix, but also includes comments from a Japanese history professor and a Catholic priest familiar with Jesuit history. Going beyond the normal fluff, it reflects Scorsese’s very personal investment in this project.

Martin Scorsese does it again with another classic film about faith added to his resume.

Click on the images below for unaltered, full resolution screen captures ripped directly from the Blu-ray. Patreon supporters see our screen shots before publication, can view our entire library in .png format, and gain access to 14 Silence exclusives for as little as $1. They are perfect for custom cover art, film study, or other applications.