It is unfathomable talented people – and in such numbers – considered Collateral Beauty’s premise and still chose to appear in the finished film. Adjectives for “appalling” run dry when discussing Allan Loeb’s script.

Collateral Beauty’s platitudes and philosophies extend from a place of intellectual dishonesty, a movie existing under a veil of lies and ludicrous deception. The framework uses grief to pander, an utterly crude ideology swept up in an offensively inhumane capitalist endgame.

Collateral Beauty extends heartache and woe to each of its characters, a group of three well off Manhattan-ites who throw preposterous amounts of money at poor stage actors in an effort to help “heal” their grief-stricken boss, Howard (Will Smith). Rather than discussions of time, death, or love – the three elements which hinder Howard’s recovery – everything is solved by money.

Loeb’s script expects, even dreams of, a level of empathy for all. In other circumstances, maybe. One of the three Manhattan dwellers, Whit (Edward Norton), deals with a vicious divorce. Simon (Michael Pena) suffers from health problems. Claire (Kate Winslet) browses sperm donors on her lunch break, the only feminine-driven issue a male Hollywood writer could conceive.

Few films with such a conceptual misfire see actual release

But no, those three manipulators cast a cruel net, seeking not to support Howard, but instead take the company from his control. Through their actions, they show the most capitalist means to an end – sheer selfishness, greed, and belief money can solve any problem. Howard calls the trio friends. Absolutely nothing in Collateral Beauty indicates these people care anything for him. And they pull their stunt at Christmas, because they’re bastards.

Breaking from these loathsome origins, Collateral Beauty reconstructs A Christmas Carol in the crudest of ways. Howard’s trio of overpaid actor “angels” – whether real people or not; Collateral Beauty seems not to care – poke and prod him only briefly. Collateral Beauty is too concerned with holding up everyone in positive light, draining any central drama as it jumps between numerous key players.

Credit to the stars – Will Smith’s emotional gamut is sensational and Helen Mirren desperately tries to bring true empathy into the piece. Winslet, Pena, and Norton feel like afterthoughts, their problems inserted for the sake of dramatic necessity, people to actively root against as they hatch their corporate takeover plan. Few films with such a conceptual misfire see actual release. Most stop at the first draft. 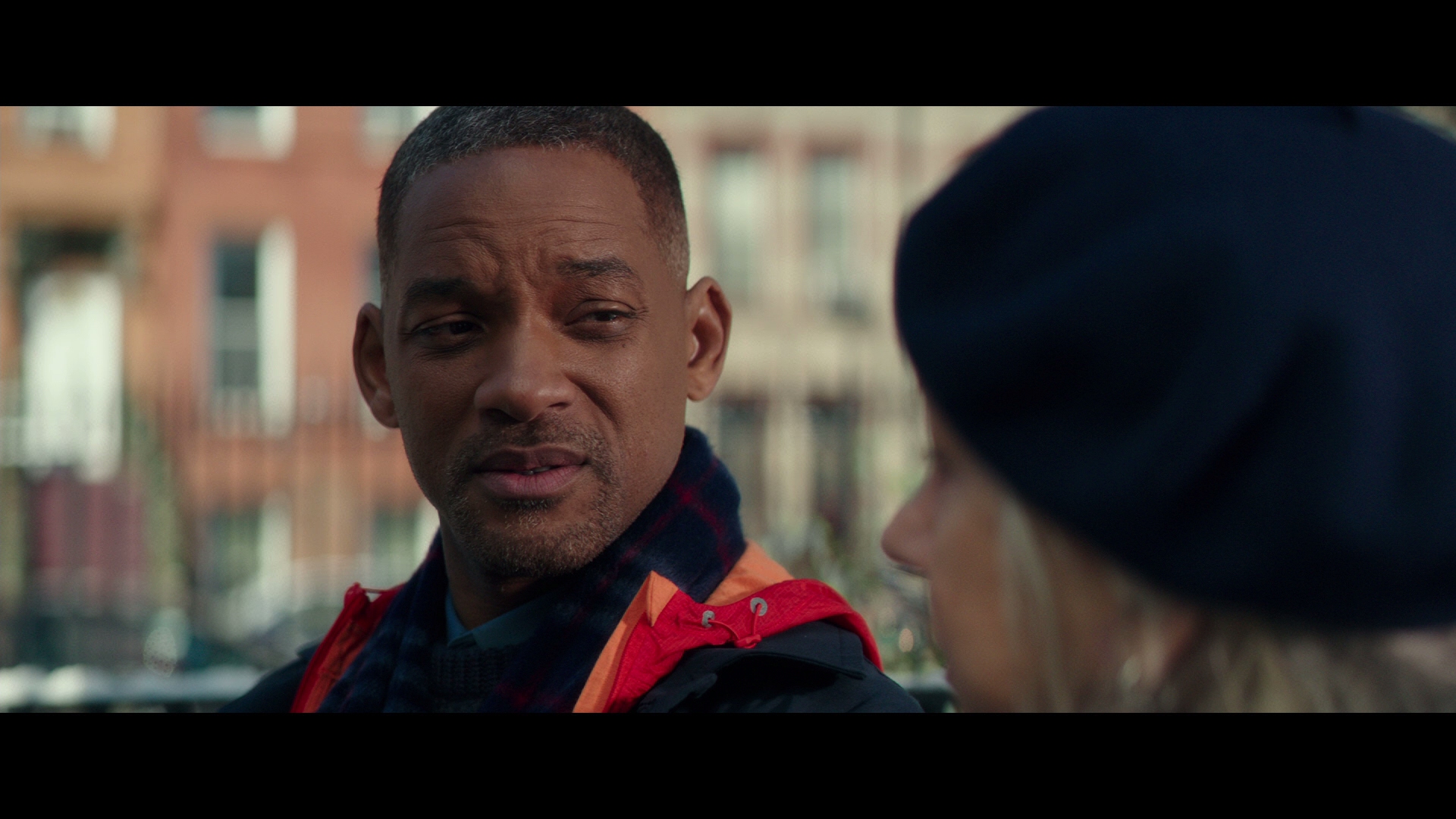 Small issues appear during the credits. Some aliasing appears on the edges of some dominoes and even the credit font itself looks choppy. It’s doubtful any filtering is used (evidence isn’t there), rather a lackluster encode.

This doesn’t dampen much. Finely resolved facial detail and glamour shots of New York follow the feature as it moves. Excellent source material gives this disc some energy, rendering exceptional fidelity with consistency. Rarely does Collateral Beauty miss something.

Down in a subway, trains pass between channels, and during a bike ride in the middle of the street, traffic surrounds and moves around Howard as he travels. Excellent panning work, with natural dynamic range.

A Modern Fable is the lone bonus, a 15-minute featurette determined to justify this dud.

An appalling attempt to show the impact of grief, Collateral Beauty is marred from initial conception and the execution isn’t better.

Click on the images below for unaltered, full resolution screen captures taken directly from the Blu-ray. Patreon supporters see our screen shots first, view our entire library in .png format, and gain fast access to 15 Collateral Beauty exclusives for as little as $1, perfect for custom cover art, film study, or other applications.