Veteran director Mamoru Oshii skillfully created a classic anime landmark in this futuristic masterpiece based on the groundbreaking manga by Masamune Shirow. Ghost in the Shell is a dystopian anime from Japan that indulges in esoteric philosophical questions of machine consciousness and blazing action at the same time.

The movie is an intelligent blend of Blade Runner, Robocop and even Predator, becoming one of anime’s most influential films after making its debut in 1995. From the very first moments of its stylish opening credit sequence, Ghost in the Shell immerses you in its technological future. It has been credited with inspiring such Hollywood films as The Matrix. Ghost In The Shell is one of the few anime movies from Japan to have made a serious impact on Western culture, as witnessed by the live-action blockbuster coming this month starring Scarlett Johansson.

The year is 2029. Humans are more machine than man as cybernetic interfaces connect everything together in a sea of data. Some humans are little more than “ghosts” trapped in mostly artificial machine bodies, giving them abilities beyond human limitations. The “ghost” is supposed to be the essence of remaining human consciousness in the cybernetic body.

Major Motoko Kusanagi is an elite cybernetic female government agent. The Internal Bureau of Investigations are hot on the trail of the mysterious “Puppet Master,” a supreme computer hacker capable of infiltrating human hosts. With her fellow agents from Section 9, they embark on a high-tech race against time to capture the omnipresent threat.

… this stunning sci-fi spectacle challenged the boundaries of mainstream animation

Heavy on philosophical ruminations concerning the nature of machine consciousness, Ghost in the Shell isn’t always accessible entertainment. Some of its popularity is due to Motoko herself, a tough female action lead in the grand tradition of Ripley from the Alien franchise. Motoko even doubts her own humanity at times and the point is made that her “ghost” to use the movie’s parlance is indistinguishable from a regular person’s consciousness.

Ghost in the Shell took the world by storm in the mid-90s, exhibiting a new dimension of sophistication and maturity for anime. Seamlessly merging traditional animation with the latest CG imagery, this stunning sci-fi spectacle challenged the boundaries of mainstream animation with realistic art and a uniquely intelligent story. It’s futuristic anime made for the thinking man.

One can easily see why Hollywood has been trying to adapt it for Western audiences since it first became famous in the 1990s. We can only hope some spirit from Mamoru Oshii’s classic film remains in the coming Scarlett Johansson blockbuster. 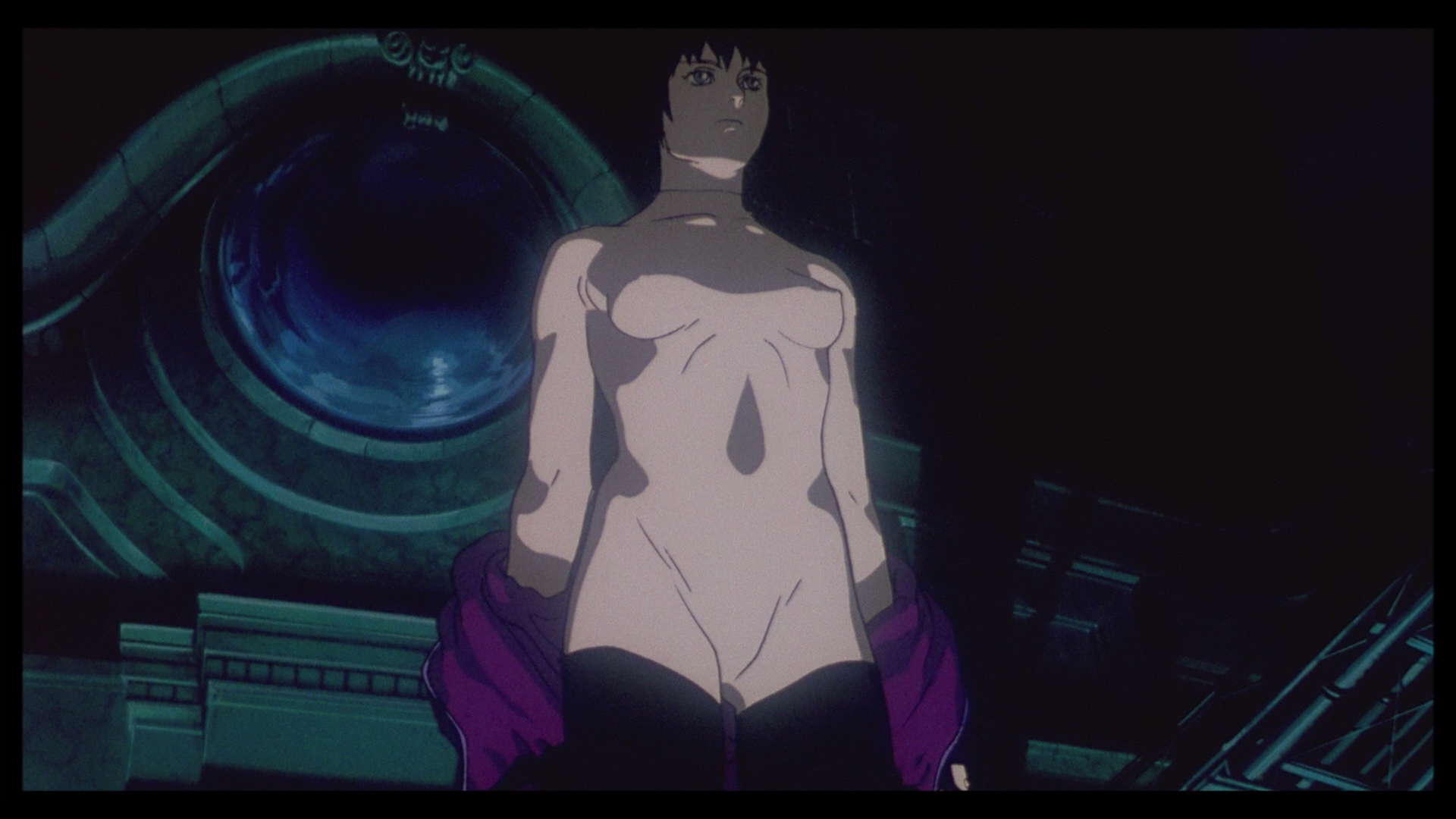 Let’s get this out of the way early. This Mondo Steelbook edition merely reuses the same A/V presentation from the 25th anniversary edition released in 2014 from Starz/Anchor Bay. That means it’s the same disappointing transfer of the original theatrical cut. This is actually the identical disc, so save your bucks if you are only looking for an A/V upgrade from that earlier version.

This is a passable transfer struck from a softer telecine effort. It looks darker in contrast than the remastered Ghost in the Shell 2.0 edition which revamped some of the movie’s effects. The elements are in excellent condition without noticeable wear or detritus. That provides a stable, consistent viewing experience. Ghost in the Shell is looking a little dated these days, which is why the movie was mildly “remixed” back in 2008 for the 2.0 release.

The original Dolby Stereo 2.0 Japanese soundtrack is presented in PCM. A 5.1 English dub is heard in 5.1 DTS-HD MA. I have to confirm the English soundtrack contains the same audio errors heard on the 25th anniversary release, which likely disappoints many fans looking for corrected audio on this theatrical cut.

The English dub has missing sound effects and an odd surround mix with unusually quiet bass for an action film. Fan boards have pointed these issues out since the 25th anniversary disc was first released but no attempt has been made to fix the audio problems. The theatrical cut remains stuck with sub-par audio that could be corrected with a little work.

Taking the English dub on its own merits, it’s a solid effort with one small failing. The English voice actress for Major Motoko Kusanagi occasionally delivers flat line readings when the character goes off into her philosophical musings.

Optional English subtitles appear in a white font. Clearly made for a British or possibly Australian audience, this English translation is choppy and lacking nuance. I’d recommend the English dub for a better translation.

This Ghost in the Shell limited edition release comes with exclusive Mondo key art in collectible Steelbook packaging. While the included Blu-ray is a mere reissue of the 25th anniversary edition released back in 2014, it’s tailor-made for hardcore Ghost in the Shell collectors looking for that Steelbook goodness. Up close it’s an impressive case and eye catching. That anniversary version strictly included the original theatrical cut, which had only been included as a bonus in inferior shape on the Ghost in the Shell 2.0 BD from 2009. So if you are looking for that “remixed” version of the film, look somewhere else than this Steelbook.

What may tempt non-steelbook fans into picking up this release is the included UV digital copy. It redeems in HDX on VUDU and other UV service providers.

An influential anime classic in its original theatrical form, repackaged in a stunning new Steelbook.

Click on the images below for unaltered, full resolution screen captures ripped directly from the Blu-ray. Patreon supporters see our screen shots before publication, can view our entire library in .png format, and gain access to 13 Ghost in the Shell exclusives for as little as $1. They are perfect for custom cover art, film study, or other applications.