Considering Disney, Moana is quaint in its antiquated formula – an inspiring story of self-purpose set off by tragedy and loss, starring a lead character looking for their true self. Pick a Disney classic. The formula fits, much as it does for a litany of iconic stories.

Rarely stopping yet never tiring, the balance achieved between the needs of action and narrative is splendid. Moana finds otherwise inconsequential action purposeful, using a lavish chase scene against wacky coconut villains to bond heroine and hero Maui (Dwayne Johnson). It’s a good time, feeding off the energy of these two leads, and the ocean setting – potentially repetitious as it might be – produces a litany of sights.

Beauty admittedly accounts for much in this animation milestone. Easy as splashing color on the screen could be, Moana’s super saturated approach cautiously filters a bevy of carefully composed palettes. Excitable as the voice cast is, the color adds an equally enthusiastic pop to the lively imagination on display.

For its successes, Moana’s catalyst for success is cultural. Aladdin’s achievements came with barbs that fit into Hollywood’s traditional Middle Eastern stereotypes; Moana chooses an exacting approach, much as the fantasy will allow. Chipper songs speak of island life, and Moana’s own quest is one of reconnecting with heritage, done so without good vs evil, rather a restorative measure, ensuring culture continues. Moana fights for what lives instead of what must die.

Better still, Moana enters the Disney pantheon as a female protagonist interested in being herself. She’s not sailing for romance, she finds answers on her own, and conquers fear with her smarts. Whether marketing or not, Moana doubles down on the “not a princess” line; she rejects her place as such when put there by male characters, empowerment that appropriately lacks an aggressive undertone. Moana is who she is, and in the Disney lineage, there’s no one else like her. 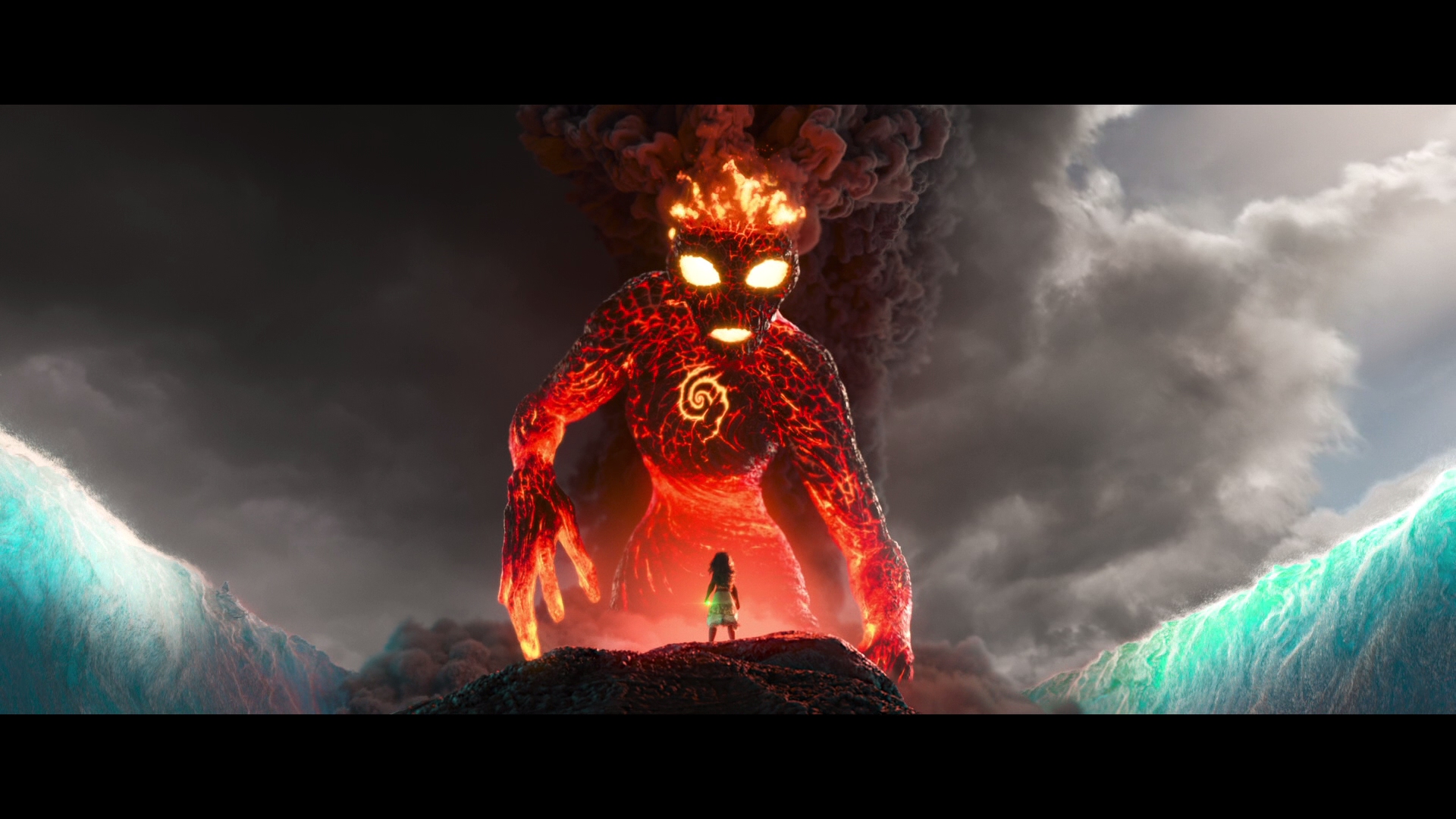 Remember the moment in Independence Day when the jets first spy the alien ship and the pilot’s jaw drops as he says, “Holy god”? That’s an appropriate reaction for viewing Moana.

If there’s a film with better color than this, in terms of saturation, variety, and beauty, I know not of it. Island settings glisten with greens. Flora buds in every direction. Tribal costumes poke from each corner of the screen. Generous sunsets push all manner of orange and pink. Translucent water spills blues previously unknown to exist (or not, but still).

At night, an impeccable black skyline fills the screen. In daylight, Moana brings with it the standard for contrast. Ravishing detail comes down to individual grains of sand, minuscule bits of texture on Maui’s tattoos, and waves visible for miles. Far shots of islands render leaves and grass. Skin hosts a pristine texture, at distance or not. Even when challenged with hordes of objects spinning around the screen, Disney’s invisible encode holds up.

There’s an argument Disney is overdue for UHD as resolution is challenged in Moana’s most complex scenery, but for Blu-ray? It’s tops.

Vibrancy spills from the songs, brimming with dense drums and sterling highs. Action scenes utilize the setting to place water around the soundfield, wonderful when in the midst of a storm or heavy waves. A sequence in a cave has a fun moment as drums echo from speaker to speaker.

As an overall mix though, Moana isn’t a standout. Bass doesn’t strike outside of the music and surround use feels reserved to moments where absolutely needed. Extra rear channels in this 7.1 mix feels underutilized, particularly missing during the finale with plenty of opportunity.

Pick a starting point and no matter where you go, Moana’s bonuses will leave behind a good time. Inner Workings, the short which joined Moana theatrically, deserves a look. Disney’s production value remains at the top of their class for Voice of the Island, peering into the culture and where much of Moana’s inspiration originated, running a half hour total.

The Element of… deconstructs four animation principles, and it’s wonderful to see true 2D animation find a home. Likewise, Island Fashion looks at the costumes and how authenticity was tantamount when designing. Peek into the music process via They Know the Way. Deleted scenes offer director intros and run a lengthy 26-minutes. A commentary with Ron Clements and John Musker is no surprise to see after the quality of bonuses thus far.

What’s left is fluff, a selection of music videos, a deleted song, easter egg spotting, a Moana short, and rapid-fire Q&A with some of the cast/crew. Still, great bonuses on a great disc.

Disney turns the familiar into the new with Moana, a gorgeous cultural spectacle that also empowers without the aide of cliches.

Click on the images below for unaltered, full resolution screen captures taken directly from the Blu-ray. Patreon supporters see our screen shots first, view our entire library in .png format, and gain fast access to 19 Moana exclusives for as little as $1, perfect for custom cover art, film study, or other applications.