Phyllis Coates headlines this Republic Pictures serial from the ’50s

As movie serials were drying up at theaters in the ’50s, Republic Pictures knocked out the low-budget Panther Girl of the Kongo in twelve short installments. Together they run less than three hours but offer a concise adventure full of thrills. The big draw is Phyllis Coates as Panther Girl, most well known for playing Lois Lane in the first season of The Adventures of Superman. The titular Panther Girl is an elephant-riding, vine-swinging heroine in jungle adventures against gigantic beasts known as claw monsters.

Franklin Adreon (Commander Cody: Sky Marshal of the Universe) directs the twelve chapters of the serial with thrilling names such as The Killer Beast, River of Death and House of Doom. Those titles over-sell the action but you get the gist of what Panther Girl’s adventures are all about. This is quaint action filmmaking from the ’50s with all that implies. Its plotting is drawn out and repetitive due to the serial structure. Expect frequent cliffhangers putting Panther Girl and her allies in danger.

Jean Evans (Phyllis Coates) is Panther Girl to the natives in Africa. They believe she has special powers for her prowess in the jungle and her affinity for the African wildlife. Could it be the cute jungle costume she wears all the time? Possibly. In reality she is a wildlife photographer on safari.

Panther Girl’s close friend in these adventures is big game hunter Larry Sanders (Myron Healey). Don’t expect much in the way of romance, Larry and Jean are written platonically as possible. Together they confront the villainous Dr. Morgan (Arthur Space) and his forgettable henchmen, running an illicit diamond mining operation. The local Returi tribe, a group of primitive natives, play their part as the stereotypical African tribesmen demeaningly depicted in Hollywood at the time.

[Coates] is the main reason why this serial is entertaining

Dr. Morgan is on the dull side for a mad scientist but he creates a nemesis that will continue to plague Panther Girl over the twelve chapters. His serum turns ordinary crayfish into gigantic beasts called Claw Monsters. It throws the local tribe into chaos, forcing Jean and Larry to investigate. As you can guess, camera tricks are used to make the Claw Monsters appear huge in size. It’s a primitive effect that proves charming if your expectations aren’t high.

Panther Girl of the Kongo is pure innocence from a different time, when audiences were far less sophisticated and picky about their movies. Jean does get knocked out all too often in the hammy fisticuffs we see between Larry and Dr. Morgan’s henchmen. What we do get are a number of surprising stunts showing Panther Girl riding her pet elephant, climbing trees, cliff diving and in her best moment, wrestling an actual animal.

There are moments when the serial goes against the gender norms of the time and actually has Jean rescuing Larry. Phyllis Coates makes the hokey Panther Girl concept work without a hitch. She is the main reason why this serial is entertaining. The no-nonsense heroine is an early precursor in attitude to today’s female action heroes.

As a lesser known serial from the ’50s, Panther Girl of the Kongo is packed with adventure and action. Probably best viewed in the same format as it was intended, regular installments, nostalgia fans should get satisfaction from it. Watching the Republic Pictures serial all at once exposes the limitations of its serial plotting and repetitive formula. 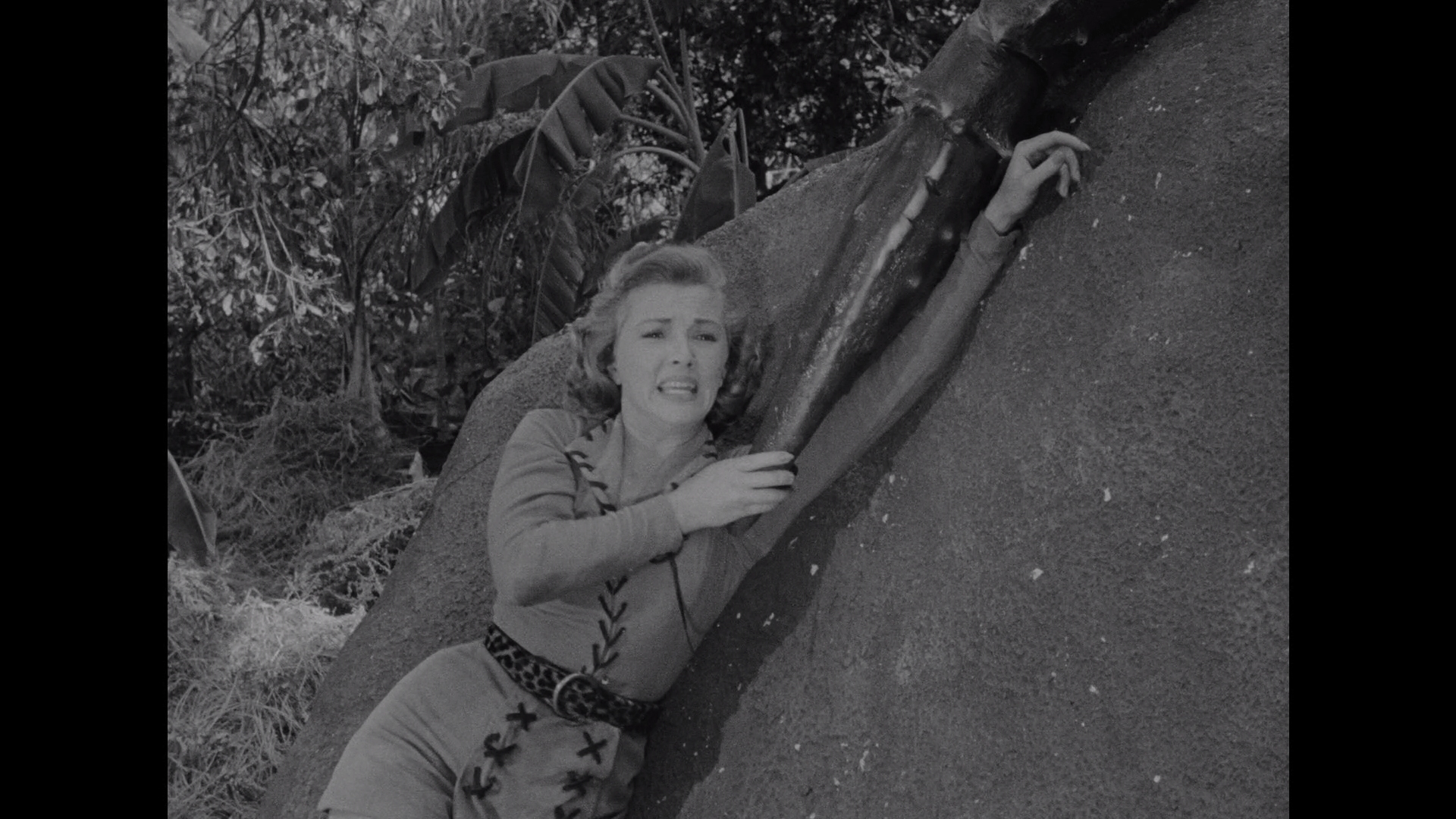 The entire Republic Pictures serial at 168 minutes is presented here in fine fashion. Olive Films licensed the serial from Paramount and has utilized an excellent HD transfer for the black-and-white production. It is shown in satisfactory clarity and crisp definition at its intended 1.37:1 aspect ratio.

Encoded in AVC on a BD-25, the compression runs at fairly low bitrates in the teens. There is no real effect on the video. This isn’t demanding material that needs better compression rates. The film-like transfer shows no overt processing and offers a stable, consistent contrast.

It doesn’t pop with immaculate detail but the low-budget production includes standard Hollywood cinematography of the era. The roughest parts are the stock footage occasionally used as filler, pulled from another Republic Pictures serial.

Considering its obscurity, Panther Girl of the Kongo looks fantastic on Blu-ray. This is the serial’s definitive HD presentation.

The mono audio sounds fine in a 2.0 DTS-HD MA presentation. The dialogue is cleanly heard in intelligible quality. The sound design does have its limitations and doesn’t create the extra atmosphere action films would later acquire.

No special features are included.

Click on the images below for unaltered, full resolution screen captures ripped directly from the Blu-ray. Patreon supporters see our screen shots before publication, can view our entire library in .png format, and gain access to nine Panther Girl of the Kongo exclusives for as little as $1. They are perfect for custom cover art, film study, or other applications.