Quiet, somber, lonely; Moonlight is a story about moments we block from our memory. Others, the positive incidences, we allow in by choice to blot out those negatives.

Few films, if any other than Moonlight, travel alongside gay black youth in a poverty-stricken suburb of Miami. Moonlight deals in cultural masculinity, those peer pressures to exude toughness in an area flush with drug use. Coping isn’t an outlet.

Chiron’s story comes together from three critical life junctions – his childhood, high school, and young adulthood. Each is a battle in which Chiron fights against who he is. An introverted kid hiding the reality of his sexuality, early in his life, Chiron leans on a surrogate father figure (a stellar performance from Mahershala Ali). Fatherly advice sharply foreshadows Chiron’s life crisis, cautiously building a candid atmosphere around heroin dealers and their addicts.

Jenkins’ distinctive touch, rich dialog, and careful compositions spill over onto each frame of Moonlight.

Barry Jenkins’ first feature length outing as writer/director gives a stellar, honest backdrop for Chiron. He’s a character faultlessly drafted, struggling emotionally, unable to speak out as he’s ridiculed for his behavior. The trio of actors who conceive Chiron come led by the brilliant Alex Hibbert, playing beyond his years as a nine-year old battered by bullying and the distance from his peers.

Moonlight speaks for an audience unaccounted for in film, yet stepping beyond, begs for all to embrace their individuality. Great cinema does that – reaching more than is intended. Yet, it’s Jenkins’ distinctive touch, rich dialog, and careful compositions which spill over onto each frame of Moonlight. Harsh and thematically cruel as it seems, Moonlight is oddly comfortable in its closure – a full release of tension in which crude social norms are whisked away. High-level cinema, then capped by a finish unwilling to give in to stereotypes.

This is a film about race, insofar as how racial culture traps people in generalizations of how or what they should be. Moonlight’s idiomatic narrative steps down from those pre-conceptions, even attacks them for their socially handicapping results. Chiron has closure when he breaks free. Moonlight doesn’t give an answer for bit characters like Terrell (Patrick Decile) or other kids caught in the swell of overly virile behavior. They may never escape. Chiron is, eventually, one of the lucky ones. 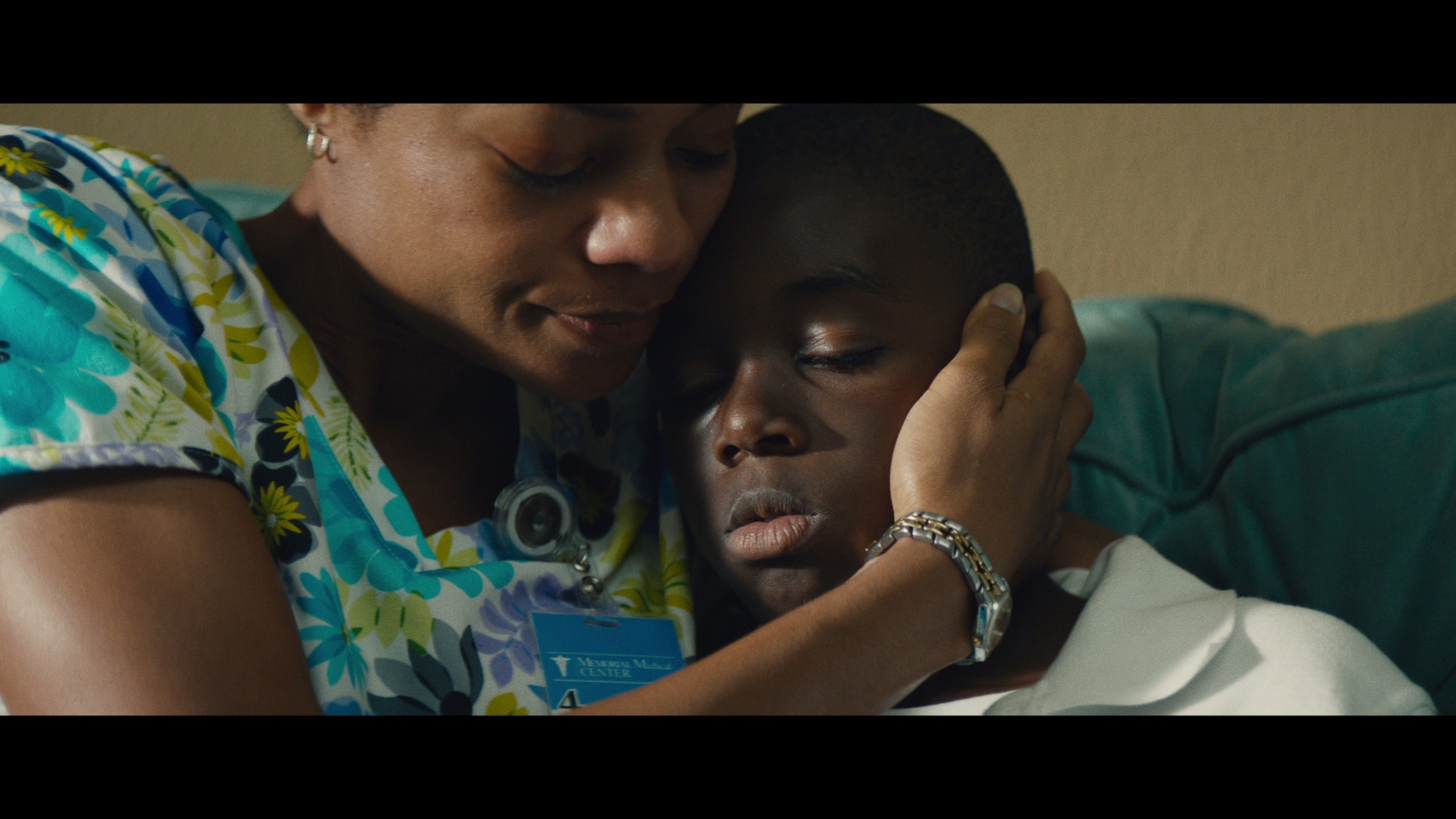 Exteriors hold the same standard, splendid fidelity and all. Trees, homes, concrete; all of it features prominently down to the tiniest textures. Some stylistically gorgeous effects add a vintage quality to numerous shots, and to no detriment of the end results.

Aspects of the color correction process leave artifacts. Black levels wind down to blues during one sequence, and while waiting for a train, those blues show brief macroblocking. Otherwise, Moonlight stays high on contrast with vivid saturation. Primaries shine, with an overall warmth offering an appealing colorscape.

A key narrative point concerns waves crashing onto a shoreline. Moonlight opens with them in the rear channels, and utilizes them often. Each time, they spread the soundstage, a highlight in a film flushed with ambiance. Lively streets and school hallways fill the speakers.

Select soundtrack choices nicely jump into the stereos, lively LFE happening later when inside the car with Chiron.

Barry Jenkins jumps in for a solo commentary, followed by the fine 21-minute making of, Ensemble of Motion. Poetry Through Collaboration spends 10 minutes on the music design, with Cruel Beauty focused on the location shoot in Miami.

Moonlight’s pure, honest take on the life of a young gay black man comes to life with outstanding performances from its leads.

Click on the images below for unaltered, full resolution screen captures taken directly from the Blu-ray. Patreon supporters see our screen shots first, view our entire library in .png format, and gain fast access to 12 Moonlight exclusives for as little as $1, perfect for custom cover art, film study, or other applications.