Mel Gibson lays so much symbolism, violence, and hokey romance onto Hacksaw Ridge there’s little room left for the heroism of Desmond Doss. Choosing not to wield a weapon during his service, Doss saved a seemingly unbelievable number of soldiers during his time on the Japanese front. Gibson turns this stellar story into a made-for-Hallmark love story and an overdone religious allegory, visually anointing Doss into sainthood. Fantastic story, disappointing piece of cinema.

Read our full review of Hacksaw Ridge for more.

Stellar and sharp digital cinematography pulled from a 2K intermediate is a showcase of image fidelity. Incredible facial definition continues throughout, decorating close-ups with high frequency material no matter the condition. It’s impressive in the first half with generous light surrounding Doss, even more so when the film turns to night. Stuck in a hole with no visible light source, close-ups continue to pour out definition. A bit of crush doesn’t sour the visuals and feels natural to the scene.

Exteriors of troops marching, let down by the CGI extensions (they run hazy), still produce the needed scale. Earlier in the film as Doss wanders through a rocky forest area, texture abounds. HDR effects bloom the sunlight a touch, adding a strong backing to the drama.

Two divergent color palettes cover Hacksaw Ridge. On the front side, pleasantly warm images. For the back half’s war scenes, muted gray. Each serves the needs of the film, taking flesh tones in those specific directions. Contrast also dilutes when in the midst of war. Lingering smoke and fog blot out the sun, if of no cost to dimensionality.

A few lingering issues come into play. A rather odd bout of compression shows up at 22:23, dividing the skyline with notably large blocks of artifacting. Minor noise is persistent throughout, but without detrimental effect. Banding shows up in certain foggier scenes, notable when the troops first go up on the ridge. Otherwise, it’s a background element visible only to those looking for it. 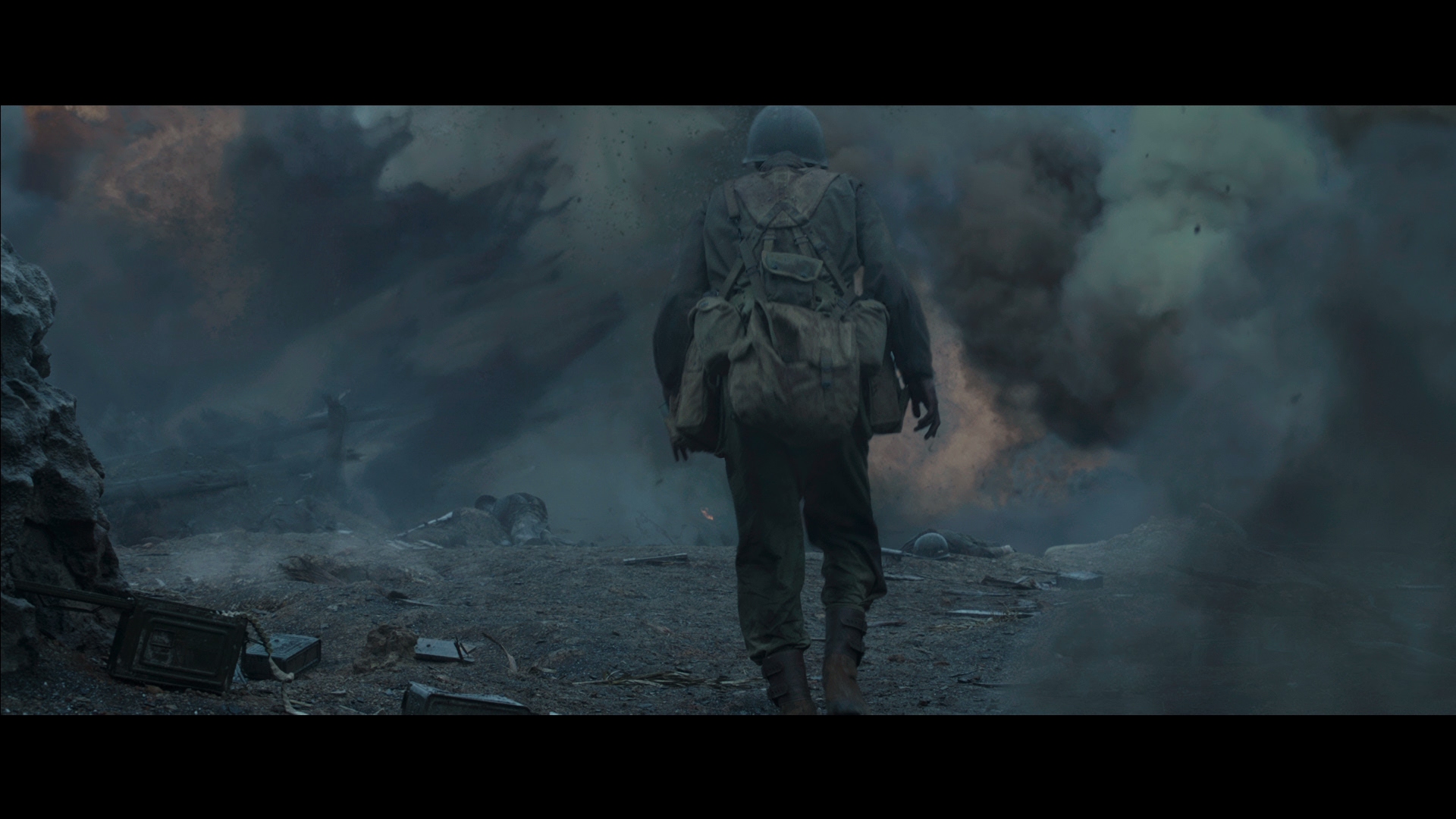 Black levels cause some strife on Blu-ray. A nighttime scene wherein Doss is beaten in the barracks falls into a murky gray. Scenes later fare better, if not into pure black. Luckily, the detail remains, pristine and sharp, well resolved down to the texture of helmets and uniforms. Gorgeous settings early through a small forest/creek resolve plentiful minutiae.

Concerns with flesh tones leave a slightly magenta hue behind. This dissipates once into the cooler back half. Otherwise, color produces dense greenery and hazy gray warzones. Firm dimensionality requires persistent contrast to stay involved. It does. Noise is bulky in certain scenes, choking the encode slightly.

An exhausting Dolby Atmos mix blares with awesome dynamic range. The soundfield is tremendous, full of precision gunshots and calls for help as Doss searches for where to go next. Grenades and satchel charges burst with spectacular low-end support, a near constant in every battle scene. Naval bombardments further elevate the disc’s sonic power while maintaining a harrowing mix of near bullet misses, cruel impacts, and startling clarity.

Ambiance spreads around busy hospitals, in the forest, and when in basic training. In the background, planes consistently take off and pan between speakers. Tanks roll past with the force of their engines dropping into the subwoofer. Even when Doss is not directly engaged, gunfire keeps the area draped in the distant sound of rounds firing.

The Soul of War spans an hour, and while detailing the film’s production, delves into Doss’ real story. It’s better than the movie itself. Four deleted scenes were smart cuts and a short Veteran’s Day greeting from Mel Gibson is included for sake of completionists.

Instead of Mel Gibson’s overwrought war drama Hacksaw Ridge, seek out the documentary on Desmond Doss’ heroism, The Contentious Objector.

Click on the images below for unaltered, full resolution screen captures taken directly from the Blu-ray. Patreon supporters see our screen shots first, view our entire library in .png format, and gain fast access to 24 Hacksaw Ridge exclusives for as little as $1, perfect for custom cover art, film study, or other applications.