A Stunning French Adaptation With Léa Seydoux as Belle

Director Christophe Gans’ Beauty and the Beast (La Belle Et La Bête in its native French) is a lavishly staged production of the classic tale with exquisite design. Léa Seydoux (Spectre, Blue Is the Warmest Color) is perfectly cast as Belle in this classic fairytale romance with her magnetic turn as the loving heroine. This 2014 French-language production adapts the tale and stands on its own in style from Jean Cocteau’s original 1946 film and Disney’s more recent animated version with extravagant CGI.

Christophe Gans is known as a director for his visionary visual style and unique sense of design, typified by such genre films as Silent Hill and The Brotherhood of the Wolf. His sensibility is a perfect fit for Beauty and the Beast, a sweeping romantic fairytale with fantastical settings and magical characters. He brings a believable sense of magic and pixie dust to the screen, no small feat when your male lead is a threatening, hulking monster.

What sets this adaptation apart is its intricate production design, some of the most inspired fantasy work seen recently in film or television. From the Beast’s castle to Belle’s enchanting costumes, everything works in concert towards creating its lush fairytale world. It’s a dreamy, imaginative production with stunning vision. The Beast, played by Vincent Cassel, is seen in full splendor using state-of-the-art CGI. It is beautiful work on par with the biggest and best Hollywood films.

… the French film brings its fantasy world to wonderful life

Darker in tone and closer in spirit to the original novel-length story by French author Gabrielle-Suzanne Barbot de Villeneuve than prior cinematic versions, Gans tells the mostly familiar story of Belle. When a merchant with six children accidentally stumbles upon the fearsome Beast’s abode, he is sentenced to death for stealing a single rose. Belle, the merchant’s beloved youngest daughter, rushes to take her father’s place at the Beast’s castle. What follows is an unexpected fairytale romance between the beautiful, sweet Belle and the brusque Beast.

The incredible visuals and perfect cast paper over a few deficiencies. Both Léa Seydoux and Vincent Cassel help sell the romance between their storybook characters. Their relationship’s twists and turns are lightly run over by a very economical script. It’s largely due to Seydoux’s mesmerizing turn as Belle that you believe her character can fall in love with this hideous monster. The plot itself gives short shrift to the development of their romance, leaving the actors to fill in what the script lacks.

There is also the matter of Perducas (Eduardo Noriega), the cardboard villain in Beauty and the Beast. A ruthless rogue that hounds Belle’s brother for gambling debts, it’s the one character that feels out of place in this otherwise pitch-perfect adaptation. He’s a one-dimensional character that receives a fitting end but could have been more fleshed out in development.

Christophe Gans’ lavish adaptation of Beauty and the Beast is spectacle filmmaking meant to delight fans of the source material. Much like Disney’s recent Maleficent, another fantasy film made with adult audiences in mind, the French film brings its fantasy world to wonderful life. Disney’s own live-action version of Beauty and the Beast comes out this weekend. The comparisons will be inevitable with this visually stunning French film. Whatever the new film may have, it won’t have Léa Seydoux as Belle. 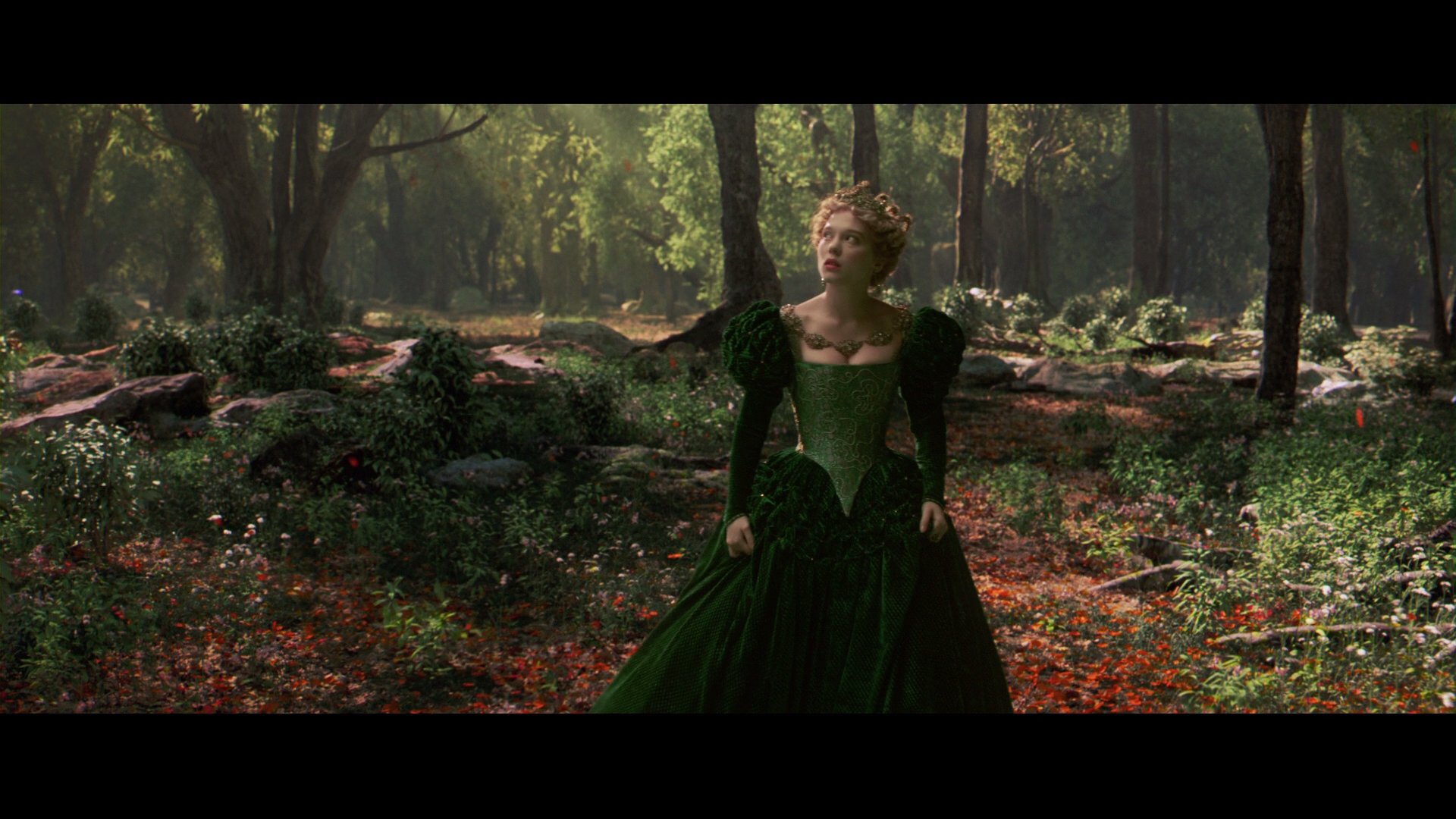 The magical realism of the Beast’s enchanted castle comes to life in this lavishly staged adaptation. It simply looks fantastic in 1080P video. Shout Factory brings over the French production in a perfect transfer taken directly from the movie’s digital intermediate, preserving every bit of color depth in full transparency. The 113-minute main feature is encoded in high-bitrate AVC on a BD-50. The 2.40:1 presentation bristles with immaculate detail and intricate production design.

One could argue the extensive CGI introduces occasional softness. Beauty and the Beast was almost entirely shot in a studio, creating precise shadow delineation and strong black levels. This is sharp, flawless video with many beautiful moments.

Shout Factory provides a 5.1 DTS-HD MA English dub and the native French soundtrack in 5.1 DTS-HD MA and 2.0 DTS-HD MA. Heed my advice and listen to the original French dialogue from the French surround mix. The English dub is satisfactory but its French-accented translation looks badly off with the cast’s lips. The surround mix itself is solid with adequate LFE and fine spatiality across its soundstage. There is nice rear surround action with a few subtle moments of superb audio design.

This is fine audio design made with clarity and purpose, showcasing clear fidelity and a score that reminds me of composer John Williams’ lesser works. It lacks the massive impact I suspect it would have received in Hollywood but certainly serves the film.

The optional English SDH subtitles display in a white font, inside the scope presentation at all times. Listed as English subtitles, the SDH additions are mildly distracting in a few scenes.

Shout Factory includes a DVD and downloadable digital copy for Beauty and the Beast. First pressings come with a handsome, embossed slipcover. The included digital copy’s redemption expires on February 21, 2018, earlier than most digital copy expirations.

These special features are in French with English subtitles. The interview with Christophe Gans is the most revealing, as the actors are asked somewhat lighter questions.

Interview With Director Christophe Gans (19:32 in HD) – Gans discusses Jean Cocteau’s film version and his ambitions with this fairytale. It’s a smart interview covering the limits of CGI and the state of American filmmaking, among other topics related to his film.

Interview With Léa Seydoux (09:02 in HD) – The actress discusses her love of the prior movie versions and her early desire to be a princess. It’s a cute, down-to-earth interview discussing her work with Vincent Cassel.

A wonderful French adaptation with incredible production values and a memorable Belle.

Click on the images below for unaltered, full resolution screen captures ripped directly from the Blu-ray. Patreon supporters see our screen shots before publication, can view our entire library in .png format, and gain access to 1 Beauty and the Beast exclusives for as little as a buck. They are perfect for custom cover art, film study, or other applications.