A studio known for churning out Westerns and movie serials, Republic Pictures put out the black-and-white Sabotage in 1939. Despite a lack of big stars, the b-movie is a pleasing spy thriller celebrating small-town America. Character actor Charley Grapewin from The Wizard of Oz leads this simple story of a father battling saboteurs in an attempt to prove his son’s innocence. This movie is a feel-good winner from another era that would have spoken to urban dwellers.

Tommy Grayson (Gordon Oliver, Jezebel) is a mechanic at the Midland Aircraft Corporation. They produce airplane engines for the government. Tommy is arrested by the FBI on suspicion of industrial sabotage when parts he has worked on fail across the country in suspicious accidents. His father, Major Matt Grayson (Charley Grapewin), is sure that his son had nothing to do with the sabotage. With the help of Tommy’s new fiancée Gail (Arleen Whelan, Young Mr. Lincoln), Major Grayson sets out to prove that his son was framed.

Sabotage is purely made for 1939 audiences. The b-movie thriller mixes in romance, humor and thrilling drama in a tightly scripted 66 minutes. It would have been a real crowd-pleaser with its affable lead turn from Charley Grapewin as the elderly father saving the day. Set in the nostalgic small-town America of 1939, it gently reminds viewers of the benefits and disadvantages of living in a town where everyone knows your name. This plays into the quick romance between Tommy and Gail, a Broadway performer from the big city that has to decide if settling down in a small town is what she truly wants.

Sabotage gets overly schmaltzy with Tommy, a wide-eyed young man that can’t see the bad in anyone. Even when confronted with proof, Tommy can’t initially believe one of his friends is a saboteur that framed him. He’s certainly not a character you see much of in today’s cinema but was fairly common back in the 30s and 40s. Sabotage paints in very black and white terms. Look elsewhere for morally ambivalent characters.

Sabotage is simple, sleek storytelling from a different era in Hollywood. The solid cast doesn’t have any stars but works as fine period entertainment with heart. Sabotage may not have the edge of later b-movie thrillers but its saccharine charm is a refreshing change of pace. Its melodrama may get a little hokey but there are enough turns and twists to keep it lively. 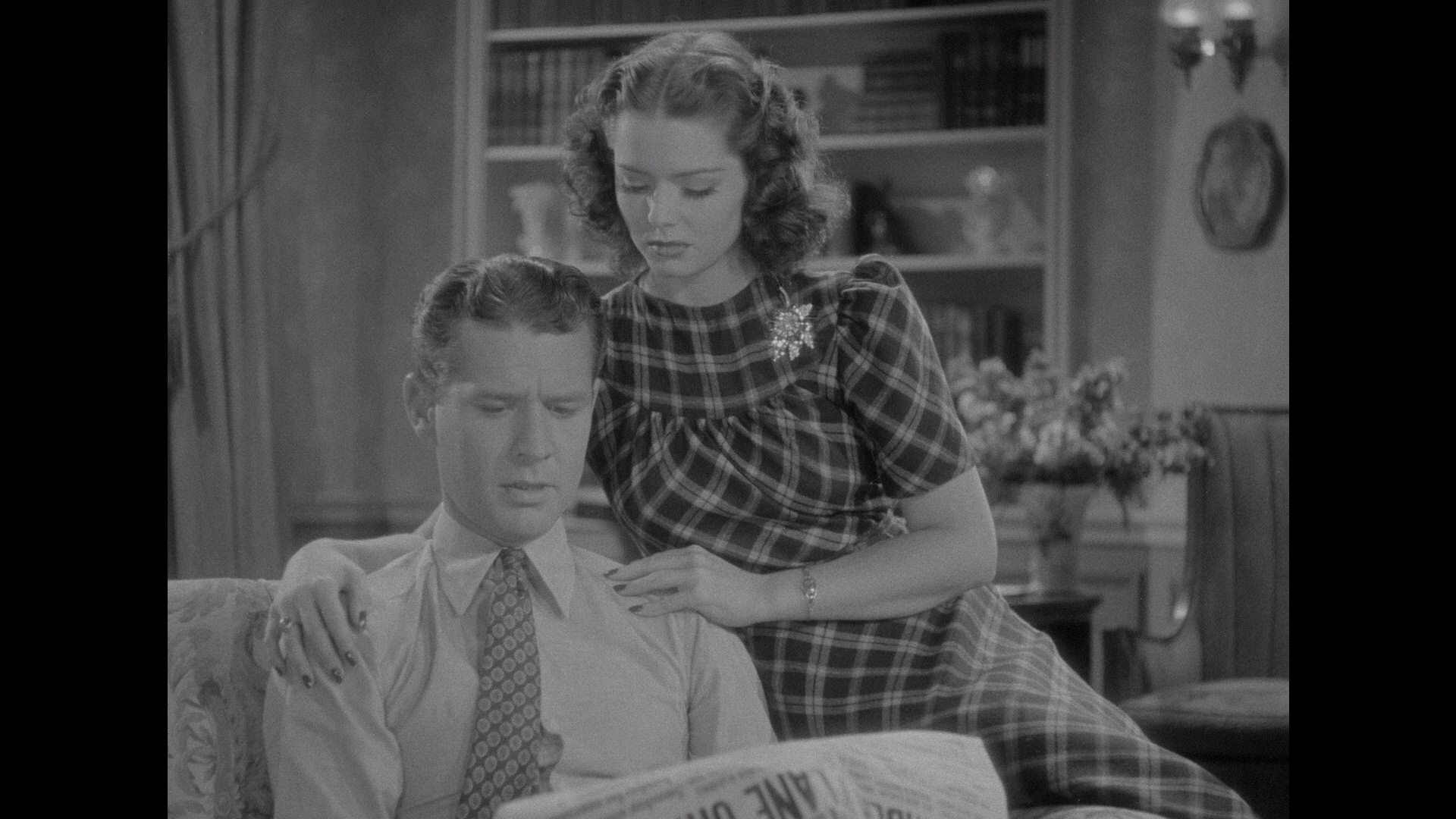 Olive Films has licensed the 1939 film from Paramount’s vaults. This is a beautifully immaculate black-and-white presentation. Given the evident fine detail and outstanding definition, this is clearly a new film transfer from elements in fantastic condition. The 66-minute main feature is presented at its native 1.37:1 aspect ratio on a BD-25. The AVC video averages healthy bitrates, perfectly capturing the vintage grain structure and attendant detail. According to my research, Sabotage had never been released to home video before this Blu-ray.

The black-and-white 1080P video is tack-sharp. A smooth, steady contrast and strong shadow delineation reveal impressive clarity for vintage filmmaking. The elements are in great shape with virtually no obvious damage. Minor remnants of debris have apparently been cleaned up. The cinematography has that classic, studio-shot clarity.

The film transfer shows little evidence of visible processing. Every nuance of texture has been transparently preserved in crisp resolution. It’s a faithful transfer without sharpened halos. Sabotage offers crisp definition with extraordinary depth for a 1939 black-and-white film. This is easily one of the strongest presentations I’ve seen on Blu-ray for a movie from the 1930s.

The dialogue-driven audio is heard in a solid 2.0 DTS-HD MA soundtrack. The original mono mix has decent fidelity with clean dialogue. Often a problem on film soundtracks this old, the mastering isn’t excessively thin or compressed. Sabotage doesn’t have elaborate audio design but its recording quality is very professional.

No special features are included for Sabotage. It comes in an ordinary Blu-ray case with a leaflet for other Olive Films’ releases.

Industrial espionage in small-town America is the theme of this Republic Pictures’ thriller.

Click on the images below for unaltered, full resolution screen captures taken directly from the Blu-ray. Patreon supporters see our screen shots before they hit the web, can view our entire library in .png format, and gain fast access to nine Sabotage exclusives for as little as $1. They are perfect for custom cover art, film study, and other applications.