Close To The Enemy is sophisticated period drama adroitly set in the aftermath of World War II. Writer and director Stephen Poliakoff’s seven-part television mini-series is a dense, tightly structured exploration of the scramble by Great Britain, America and Russia to secure prized German scientists. All three were in a competitive quest to gain an edge in technology on the other Allied countries.

Military intelligence officer Callum Ferguson (Jim Sturgess) must complete a final task for the British Army before his scheduled exit. Callum works for T-Force, a secretive British outfit that works to prevent German scientists from getting snatched up by eager Soviet agents. He must convince captured German scientist Dieter Koehler (August Diehl) to develop a jet engine for the British government. It’s a matter of national security in 1946 as Russian and American spies are snapping up their own German scientists.

The push and pull at the heart of Close To The Enemy is Dieter’s reluctance to work for the British. Abducted in the night by the British and forcibly taken to London, the reluctant German yearns to return to his homeland. This is what Callum must overcome, all the while dealing with competing agendas from other British and foreign interests.

As Callum tries to woo the uncooperative German engineer to Britain’s cause in London, he must also contend with his younger brother’s (Freddie Highmore) psychological trauma from the war. Consumed by the task of winning Dieter over, Callum has to handle a nosy British agent (Phoebe Fox) from the War Crimes Unit investigating Nazi criminals. Callum will also have to deal with a growing attraction to his best friend’s fiancee (Charlotte Riley). Disturbing secrets will emerge that challenge Callum’s loyalties at the dawn of the Cold War.

Close To The Enemy is British drama rich in emotional texture and spy intrigue. Its story doesn’t cut any corners, methodically introducing a complex tapestry of interlocking characters. Firmly anchored by its setting, the Connington Hotel in London, the once fashionable establishment becomes home to most of the show’s characters. It stands alone among the rubble, a former echo of the pre-war London. Strict food rations have turned its luxury dining into a shadow of its former self.

Callum uses the hotel to acclimatize the German Dieter and his young daughter to life in Great Britain. A range of characters walk in and out of its doors, all of them ultimately playing significant roles in Callum’s mission and personal life. Angela Bassett plays an American singer and entertainer at the Connington. Alfred Molina is a mysterious man with connections, slowly approaching Callum over several encounters.

If you only see one British period drama this year, Close To The Enemy is a safe choice with its strong cast and superb writing. The character-driven storytelling may bore some in its depth but is compelling with its complex portrayals. It doesn’t break the mold but works as finely crafted drama set in a very interesting time as the Cold War got underway. Stephen Poliakoff’s character-driven Cold War drama offers an interesting perspective into the aftermath of World War II you don’t often see.

If it could be improved in any one area, Jim Sturgess could have provided a stronger presence as Callum. He’s not the polished British spook we’ve come to think of in British drama. Callum is far more flawed, grounded by emotional struggles dealing with his mentally ill brother and very human temptations. It’s a more realistic rendering of the stress faced by intelligence agents in the field than most period fare. 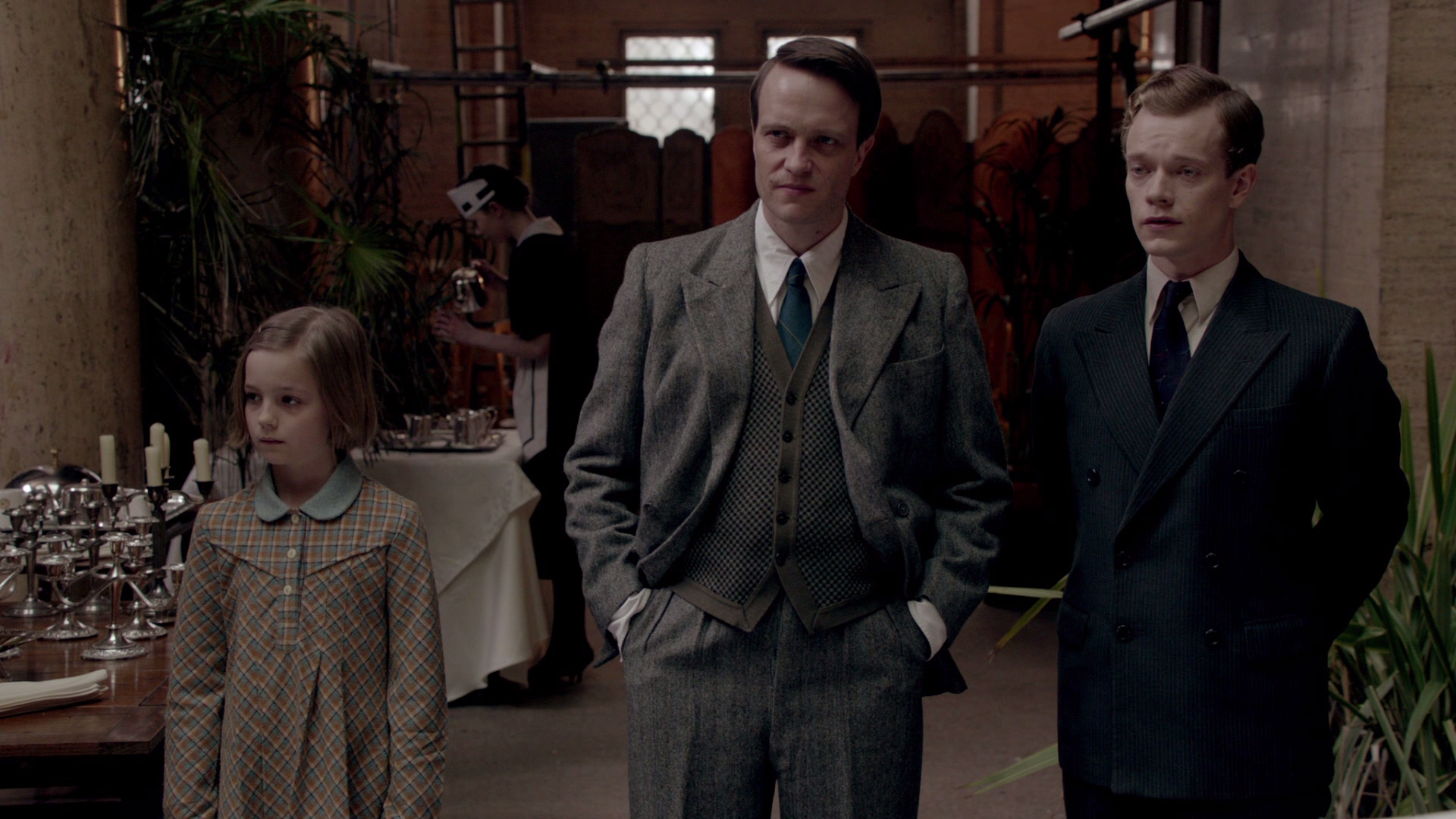 Acorn Media distributes the mini-series in a satisfying technical presentation for Blu-ray video. The seven episodes, nearing 440 minutes in total, are spread over two BD-50s and a BD-25. The AVC encode averages nearly 28 Mbps over several episodes, transparently capturing the pristine 1080P video. Nicely filmed and shown at 1.78:1, Close To The Enemy resembles many other recent British period dramas in picture quality. It’s a smooth, assured presentation of new video fidelity without the extreme demo material of theatrical productions.

The only weakness, albeit a minor one, are the mild shadow delineation issues. Dark interiors show slight crushing of black levels. Exteriors have nearly perfect clarity with strong detail. There is solid depth and a steady contrast, offering crisp definition. The palette errs on the conservative side. Subdued primary colors and dull flesh-tones work for the dreary, bombed-out London of 1946.

Close To The Enemy has a fine 5.1 DTS-HD MA soundtrack with subtle scoring and moderate surround activity. The dialogue-driven drama has a lush, dynamic mastering with crystal-clear dialogue. The sound design offers several moments when a more active presence is required with moderate bass. Improved channel separation and heightened fidelity highlight Eva’s singing routines throughout the mini-series.

The three-disc set comes with a slipcover and a small booklet reproducing writer Stephen Poliakoff’s thoughts on several topics, from historical background of the era to his concise summary of the characters. The featurettes and special features are all included on disc three.

A series of separate cast interviews from almost everyone involved in the mini-series and behind-the-scenes featurettes constitute the special features.

A deeply textured WWII period drama with a superb cast and dry action.

Click on the images below for unaltered, full resolution screen captures taken directly from the Blu-ray. Patreon supporters see our screen shots first, view our entire library in .png format, and gain fast access to 10 Close to the Enemy exclusives for as little as $1, perfect for custom cover art, film study, or other applications.